Europe marked the 90th anniversary of the end of World War I on Tuesday with somber ceremonies at memorials and battlefields to commemorate the 20 million people killed in the conflict that shaped the 20th century.

In France, site of the western front of the war, French President Nicolas Sarkozy, Britain's Prince Charles, the president of the German upper house of parliament Peter Müller and Australia's Governor General Quentin Bryce held a ceremony near the fortress town of Verdun, where 300,000 French and German soldiers died in one of the bloodiest battles.

They stood amid a field of 15,000 crosses in Douaumont Cemetery, in front of an ossuary containing the bones of 130,000 unidentified soldiers, at the spot where former German Chancellor Helmut Kohl held hands with French President Francois Mitterand in 1984 to mark their countries' reconciliation.

In London, three of the four surviving British veterans of the war -- Henry Allingham, 112, Harry Patch, 110, and Bill Stone, 108, took part in a wreath-laying ceremony at the Cenotaph in Whitehall.

A two-minute silence was observed there and in other ceremonies across Britain at 11:00 a.m. to mark the moment -- at the 11th hour of the 11th day of the 11th month -- when the Armistice signed by the Allies and Germany to end the four-year conflict took effect in 1918.

It is likely to be the last major anniversary to take place in the presence of survivors of the war which has slipped from living human memory in recent decades as the last veterans die out.

Surging Interest in World War I

In the countries that emerged victorious, there has been increasing interest in the conflict, especially in Britain and the Commonwealth countries that fought on its side. Battlefield tourism to the main sites of the Western Front -- such as the small Belgian town of Ypres, the Somme region of northern France and Verdun -- has been booming.

Ypres, which was at the center of some of the most intense trench warfare and where poison gas was used for the first time by German forces in 1915, has seen visitor numbers treble since the mid-1990s, with about half the tourists coming from Britain but many also from Canada, New Zealand and Australia, which had thousands of troops in this sector.

They walk among vast rows of headstones in the immaculately kept cemeteries and listen to guides talking about the military campaign, life in the trenches and the horror of gas attacks and shellfire. Some visitors come to pay their respects at the graves of ancestors or to find their names among the 54,896 missing soldiers inscribed on the giant Menin Gate memorial in Ypres. 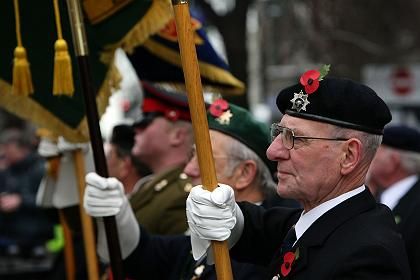 Veterans from wars that followed World War I marked the 90th anniversary in the northern English town of Leeds on Tuesday.

The majority of soldiers killed in World War I were never identified or found because they were blown apart by shellfire, sucked into the mud or buried under tons of falling earth. Many schoolchildren from Britain visit the battlefields as part of their history classes. Half a million Allied and German soldiers died in and around Ypres and many more were wounded.

The Internet has fuelled the interest by making it easier to locate the graves of relatives. The wealth of history books published towards the end of the 20th century may also have played a part.

Many come because they are awed by the courage and endurance of the common soldiers on both sides. The men fought knee-deep in mud, infested with lice and surrounded by rats and the body parts of their comrades. They would march across open fields into machine gun and artillery fire, driven, at least initially, by the love of their country. The weapons may have been modern, but the men who fought seem to belong to a distant age.

The nationalist fervor gave way to fatalism during the four years of bloody stalemate. Diaries from the trenches reveal how the soldiers, shellshocked and blunted by the death and carnage all around them, resigned themselves to their fate and clung to the hope of receiving a non-lethal wound that would remove them from the front at least for a few months.

Many went on fighting not for "King and Country" but because they feared the firing squad and did not want to disgrace themselves in front of their comrades and their families.

The names of Ypres, the Somme, Verdun or Gallipoli are now synonymous with futile sacrifice. That aspect is the greatest tragedy of the war. The sons and daughters of the generation decimated in World War I went on to fight World War II, widely seen as an inevitable result of the terms of the Armistice that humiliated and bankrupted Germany.

In Germany, there is no such culture of remembrance because the war carries the stigma of defeat and is viewed as the precursor to the rise of Adolf Hitler, World War II and the Holocaust. The death this year of the last two surviving veterans to have fought for the German and Austrian Armies, Erich Kästner and Franz Künstler, elicited no official response. The German government does not even keep records of surviving soldiers from either war.

By contrast the death of the last two French veterans, Louis de Cazenave and Lazare Ponticelli, in January and March respectively, drew nationwide attention. Ponticelli, as representative of all the French soldiers who fought to protect their country, was given a state funeral attended by Sarkozy.

German Chancellor Angela Merkel is attending a ceremony in Poland on Tuesday to mark the 90th anniversary of Poland's independence attained with the end of the war.

While much of Europe observes sombre silences in memory of the war dead, Germans in the Rhineland are getting dressed up as clowns and taking to the streets to celebrate November 11 as the beginning of the carnival season that culminates in the week before Ash Wednesday in February. Germany will mark its own national day of mourning, called Volkstrauertag, on Sunday November 16 at low-key wreath-laying ceremonies honoring the war dead of all nations.

Neo-Nazis regularly attempt to hijack ceremonies to hail Germany's fallen soldiers. At the biggest war cemetery on German soil, in the village of Halbe south of Berlin, where more than 28,000 mostly unidentified fallen soldiers from World War II are buried, authorities have decided on a rebuilding program to stop Nazis honoring their "heroes" there.

A panel of experts has recommended narrowing the approach road and to set up an open-air exhibition about the victims of war in the square in front of the cemetery. That, they hope, will prevent far-right groups from staging annual rallies there.