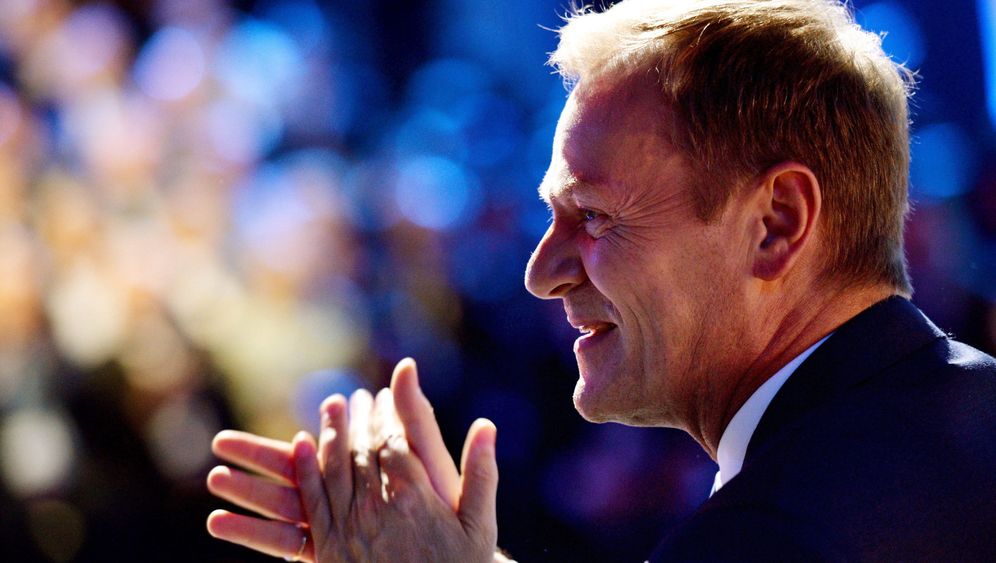 Donald Tusk is currently looking for an apartment. He has already viewed one in the diplomatic quarter of Brussels and he has excellent prospects of finding a nice new abode. The European Union, after all, is providing him with a monthly housing allowance of €3,800 ($4,700).

In just a few weeks' time, Tusk, 57, the new president of the European Council -- the powerful EU body that represents the leaders and ministers of the 28 member states -- will have an opportunity to tackle the euro crisis and the armed conflict in Ukraine. For now, though, the man who was until recently the Polish prime minister is dealing with the smaller problems that come with such a transition.

Before he takes office on Dec. 1, Tusk originally wanted to attend a language course on the Mediterranean island nation of Malta. His English is not bad, but his fellow Poles feel that it could use some polishing. In the end, he had no time for a trip, so an English teacher instead came to the prime minister's official residence in Warsaw, where boxes of books had been piling up for weeks. Tusk was busy packing and clearing out his wardrobe. He even had his suits dry cleaned specifically for his new position. It remains unclear, however, exactly when he will head for Brussels, as officials are keeping a tight lid on this information.

Tusk is the first politician from a former East Bloc country to be appointed to a top EU post. The European Union "desperately needs an Eastern European perspective," Tusk said in Brussels after his nomination, adding that he wanted to ensure that Europe responded to Russian provocations with a single voice.

'A Great Success for Poland'

Tusk's origins appear to make him the right man for this new challenge. What's more, in contrast to his predecessor, Flemish politician Herman van Rompuy, who had not even been Belgium's prime minister for a year when he was elected to the top EU job, Tusk has governed 39 million Poles for nearly two complete terms in office.

His appointment fills many Poles with pride and satisfaction that they are finally playing an important role in Europe. "A great success for Poland," wrote Warsaw's Polityka newsmagazine, and the daily Gazeta Wyborcza raved that all of Eastern Europe has been ennobled. Populist politician Janusz Palikot even made a statement that bordered on blasphemy in the eyes of many Poles when he compared Tusk's appointment with the election of Pope John Paul II.

When Karol Wojtyla, a modest priest from southern Poland, became pope in the fall of 1978, it encouraged the population in its resistance against the communist regime, and hence against Soviet domination.

In the fall of 2014, Poland feels threatened once again and sees itself as the last bastion of the West against Russian expansion -- and now a Pole is once again assuming a position of global importance: Donald Tusk, a modest man from Gdansk.

But what can Tusk accomplish in this role? "The office of EU Council president gains its power from the skill of those who occupy it," says Jan Krzysztof Bielecki, who was himself a Polish prime minister and serves as one of Tusk's key advisers. Bielecki says the trick is to facilitate the conflicting interests of the 28 heads of state and government, and then propose the right compromise at the right moment in the Justus Lipsius Building in Brussels.

This role fits with Tusk's political style, which is hardly surprising since he is cut from the same political mould as German Chancellor Angela Merkel: He's pro-European, pragmantic and consensus-oriented -- with a fine sense of possible majorities and political feasibility. His past has taught him to be skeptical of grand ideologies, and it is precisely this that makes him an excellent facilitator.

Tusk is leaving home after all these years with an admirably strong record. He has shielded his country from the aftermath of the financial crisis. The Polish economy grew at a time when the rest of Europe was mired in a deep recession. Tusk has transformed Poland from an outsider to a respectable partner in the EU. Under his nationalist predecessors, the Poles had a reputation as troublemakers in Brussels. Before it even entered the EU, Poland demanded special regulations for its farmers and particularly favorable voting weights for European Council decisions.

But Tusk has been unobtrusive and predictable in Brussels. Three years ago, when the EU passed the so-called "six pack," a series of measures to enhance financial stability in the euro zone, Tusk ranked among the proponents, despite the fact that Poland still uses the zloty as its currency. Tusk wanted to prove that his country was a responsible EU member -- and he succeeded.

Another reason for his successful foreign policy is Poland's good relationship with Germany. Right at the beginning of his term in office, Tusk defused the historic tensions between the two countries.

Merkel was a kindred spirit in this respect. "I am incapable of getting angry with Angela Merkel," Tusk once said in a SPIEGEL ONLINE interview. They both have in common that they grew up in a socialist system. Merkel remembers Poland from her youth, and she can even say "There are no more eggs" in Polish, and Tusk speaks passable German. They both belong to the liberal-conservative political camp.

Like Merkel, Tusk only makes decisions when he is sure that he enjoys majority support -- a political style that is required for his new position. Janusz Reiter, a former Polish ambassador to Germany, has known the future council president for decades. "Merkel and Tusk are similar in that they do not allow themselves to be guided by grand visions," he says. The Warsaw magazine Polityka even calls Tusk a "radical pragmatist."

A glance at his life provides some insight into why he doesn't think much of ideologies. Tusk experienced how socialism, neoliberalism and nationalism successively failed in his country.

He came of age politically in the 1970s. At the time, workers in the country's industrial centers were staging strikes to protest against the power of the communist state, which in their eyes was not "Polish," but rather a symbol of Soviet foreign domination. The regime hit back hard, for example, in 1970 in Tusk's home city of Gdansk. He was only 13 years old, a schoolboy from a humble background, when the army opened fire on protesting shipyard workers, killing 41 and wounding 1,200.

Tusk joined the student organization of the Solidarity trade union, which conducted roundtable negotiations with the regime in the 1980s to usher in a transfer of power. Dialogue pays off -- that, at least, is the lesson Tusk must have learned from this chapter in Polish history.

After the fall of the Iron Curtain, Tusk became one of the main proponents of what was known as "Gdansk liberalism." He and his fellow activists believed that only the free market could save the ailing Polish state economy, but this ideology also turned to dust before Tusk's eyes. The privatization sparked deep political discord and drove up the unemployment rate as high as 20 percent. The state companies that were sold off often didn't end up in the hands of entrepreneurs, but were instead seized as booty by corrupt apparatchiks.

The profiteers of this deplorable situation were Tusk's domestic political rivals: The twins Lech and Jaroslaw Kaczynski were conservative nationalists, and they preached that the Poles had to stand together and resist the turmoil of the modern age -- as Catholics and as a nation with a tragic yet heroic history. But by campaigning for a special role in Europe, they made Poland into an outsider within the EU.

In 2007, Tusk won the election against the Kaczynski brothers. The country was longing for tranquility and was thoroughly fed up with the dramatic tone adopted by the twins. Tusk instinctively capitalized on this yearning for harmony. During the election campaign, he kicked soccer balls around on small town playing fields and cultivated a friendly image, while showing that he could also play defense.

The media in Warsaw dubbed his style the "politics of love." He has remained true to this approach, and even in the face of Putin's hegemonic ambitions, he refrains from polemic attacks.

"Of course, we Eastern Europeans are particularly sensitive because of our past," says his adviser Bielecki. Still, as council president Tusk will not become the spokesman for an anti-Russian hardliner faction from Eastern Europe.

The Sunday before last, at the Baltic Sea resort of Sopot, Tusk made one of his now rare public appearances. Tusk, his wife Malgorzata and their daughter Katarzyna, Poland's foremost fashion blogger, went to Elementary School No. 8 to cast their votes in the municipal elections. On that day, Tusk's liberals clearly lost to Kaczynski's national conservatives.

Nevertheless, as the former prime minister exited the polling station, he was hardly asked any questions about the recent defeat. After all, he's now Poland's man for global politics. Tusk says he is glad that Putin discovered at the G20 summit in Brisbane just how much the world disapproves of his machinations in Ukraine. The situation with Russia has taken a dramatic turn for the worse. And Tusk says he expects the crisis to become one of the "key issues" during his term of office in Brussels and at the first EU summit under his leadership in December. "This is all the more important because we are dealing with a new wave of invasions in Ukraine, with an open war," he says.

His most important project is the plan for an "energy NATO," in which the EU and other states would form a gas procurement union and provide mutual assistance. He says this would mean that Moscow could no longer divide the community by turning off the tap for certain countries.

"Without solidarity, there is no freedom," says Tusk's adviser Bielecki: "That's something we Poles have learned."