In Germany, the move Thursday by the European Central Bank to lower its main interest rate from 0.5 to 0.25 percent has been met with mixed reactions. The development has been sharply criticized by consumer protection groups as well as banks and insurance companies that often specialize in pension investment programs. Most fear the low interest rate will adversely affect savings and long-term investments like pensions.

Axel Kleinlein, the head of Germany's Association of Insured Persons (BDV), told the Berlin daily Der Tagesspiegel that the lowered interest rate could dash hopes of the German people for decent pensions. He said it is precisely those who are saving up for old age who will be punished.

Meanwhile, the German Insurance Association (GDV), an umbrella group of private insurers in the country, said the interest rate decrease sent a "fatal message" to all people saving for old age in Germany. "The lower interest rate will be a major burden to them," said association head Jörg von Fürstenwerth.

"Unprecedented low interest rates substantially devalue savings in Germany and the euro area and increase the danger of bubbles," the Association of German Public Banks (VOB) said in a statement.

ECB President Mario Draghi is hoping the lowest interest rate in the history of the common currency can help to reinvigorate the euro zone's economy. The main interest rate is the one given to major financial institutions, who are in turn expected to pass the cheap money on to consumers and businesses.

Resistance on ECB Board and in Berlin

The decision also proved controversial within the ECB's governing board during Thursday's vote. Reuters quoted a source with knowledge of the meeting stating that around one-quarter of the ECB's 23 board members opposed the move to lower the interest rate. That source said the opposition had been led by Jens Weidmann, Germany's representative on the ECB board, but did not provide other names. Some dissenters were apparently more open to the possibility of a rate change in December.

In Germany, the ECB's new policy also faced resistance from politicians in Berlin within both Chancellor Angela Merkel's conservatives and the center-left Social Democratic Party (SPD), her expected partner in the next government coalition. Representatives of both parties warned of the danger of speculative bubbles.

Michael Meister, the deputy head of the conservative Christian Democrats' parliamentary group, said although the interest rate decision may have been made on the basis of low inflation data, there is already too much liquidity in the market and that more cheap money won't be helpful. "The danger of a bubble developing in asset prices already exists, and this decision has not lessened it," Meister told the Berliner Zeitung newspaper.

Carsten Schneider, the SPD's budget policy spokesperson in parliament, also warned that the ECB is running out of maneuvering room in the event that the already fragile economic situation in the euro zone worsens. "In Germany, the risk continues to grow of credit-driven asset price bubbles and this decision will not reduce it," he said. Worries in Germany of a bubble in real estate prices are a particular concern.

On Friday, the interest rate move, which surprised economists in Germany, was a leading topic on the editorial pages, where views seem to be almost as conflicted as those of the ECB's own board.

"It seems paradoxical: Fear of inflation had been rampant for a long time, but now all of a sudden some are afraid of deflation. But these are mutually exclusive things. Prices either rise or fall on average. Nevertheless either scenario could become reality since the euro-zone economy remains extremely fragile. Fear of both extremes is symptomatic of widespread uncertainty about the success of economic recovery in the euro zone."

"Despite the risks, the ECB's decision is a clever move. The euro will weaken against the dollar, helping Europe's exporters and promoting growth. With the return of growth, deflation will cease to be an issue."

"It's becoming dangerous: The euro zone is standing on the precipice of deflation -- i.e. of permanently decreasing prices. At first glance, such a phase could look like a paradise for consumers, whereby the majority of goods will become continually cheaper. But in actual fact, dropping prices will choke the economy."

"Deflation must absolutely be prevented -- something the ECB completely understands. Therefore, it lowered its main interest rate on Thursday from 0.5 percent to 0.25 percent. This step was correct, but had only symbolic value, because the ECB has for a long time now been powerless. It makes no difference in the real world whether the rate is at 0.5 or 0.25 percent. Both are sensationally low. They evidently cannot further stimulate the economy."

"The ECB's 'monetary policies' have come to an end. States must now employ 'fiscal policies' in order to stimulate business activity."

"The London financial sector pushed for weeks for the ECB to lower its main interest rate. The crisis-hit countries in Southern Europe also repeatedly called for lower rates. Now ECB President Mario Draghi has yielded to the pressure. A contentious decision -- even within the ECB!"

"However: The record-low interest rates do not solve the problem of the crisis states. There is not a lack of cheap money -- but often a lack of serious and painful reforms."

"The interest rate cut is therefore a last warning shot for the governments in southern Europe: Finally do your reform homework. Otherwise, the euro crisis will never end!"

"It remains to be seen whether the 0.25-percent interest rate cut will have any effect on the real economy. Lending is weak because many banks in Southern Europe are undercapitalized, and also because many indebted households in countries such as Spain are having to save money and are unable to take on new loans. But the influx of cheap money, which Draghi unleashed into the economy by the 'Big Bertha' heavy firepower method on taking office two years ago, has had other effects. Banks can borrow almost for free, and then buy government securities. Draghi's policies allow the crisis-hit countries to service their debt more cheaply."

"The decisive rate cut to almost zero has confounded everyone who claimed that the euro crisis was almost over. Draghi has let it be known that he still has further ammunition. That could include more liquidity, perhaps even negative interest rates for banks, even if that means the ECB breaking wholly new ground. But in reality, Europe is already far out on the thin ice of the euro crisis."

"Draghi has stressed that he sees no deflation in Europe. But sinking inflation rates like the most recent figure of 0.7 percent have clearly alarmed him. Therefore he has surprisingly dropped interest rates to an historic low of 0.25 percent. That's the official reason. In fact, the ECB chief is continuing his controversial euro bailout policy."

"A weaker euro above all helps crisis countries to regain their competitiveness in the export markets. As there is no mention of exchange rate policy in the ECB's statutes, they prefer to conceal this possible motivation. From Draghi's point of view, it is more important to use every means necessary to maintain low short-term interest rates on the capital markets, which have recently tightened significantly, so the debt of crisis-hit countries remains attractive to investors. But an alleviation of refinancing for selected euro-zone countries is also not in the ECB's mandate." 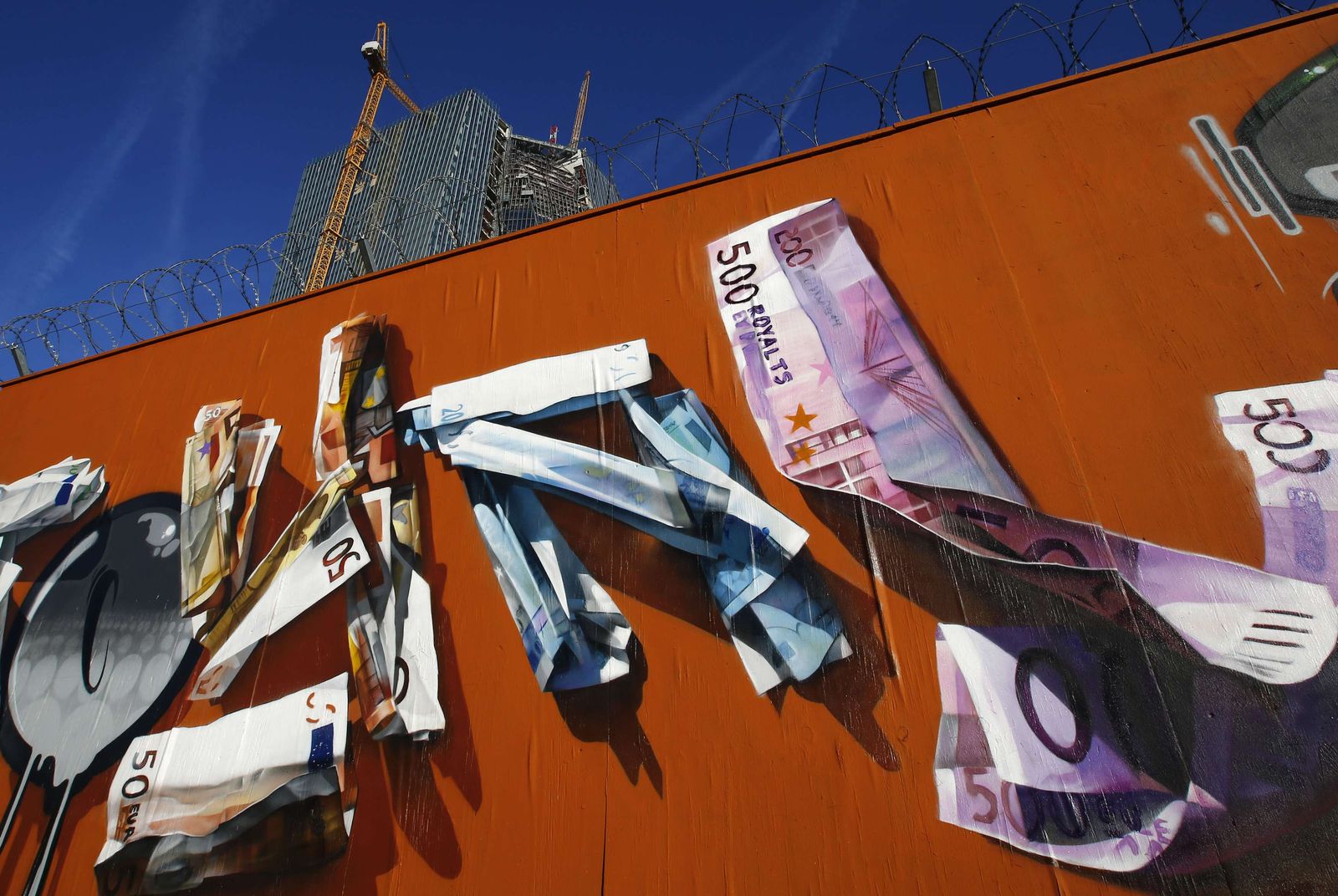 Graffiti is seen on the fence surrounding the construction site of the new headquarters of the European Central Bank in Frankfurt.