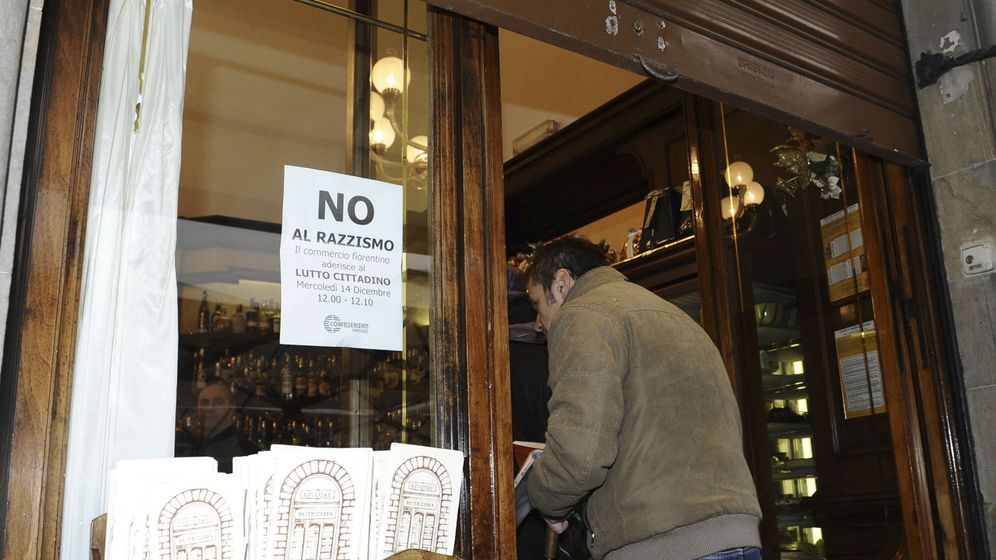 Gianluca Casseri doubled parked his Volkswagen Polo near the Piazza Dalmazia in Florence before approaching three Senegalese street vendors selling handbags, lighters and shirts there on Tuesday. There the overweight man with a crew-cut paced back and forth in front of the salesmen before saying: "Now it's your turn."

The 50-year-old then allegedly drew a Smith & Wesson revolver from his pocket, firing four or five times. Samb Modou, 40, and Diop Mor, 54, were dead at the scene. Moustapha Dieng, 34, survived with severe injuries.

Some three hours later, Casseri wounded two people from Senegal just a few steps from the cathedral before fleeing into a parking garage. There, pursued by police, Casseri killed himself, leaving behind weeping and screaming witnesses, shocked relatives and a bewildered public.

The next day Italian President Giorgio Napolitano spoke of "brutal murder," while Florentine Mayor Matteo Renzi sought to provide reassurance. The killings were not perpetrated by a group, but rather a "clear-headed, mad and racist killer," he said according to Italian news agency ANSA. "Florence is weeping," he added.

Renzi also called on Italian authorities to "nip in the bud every form of intolerance and reaffirm the tradition of openness and solidarity in our country."

Since the slayings, Italy has been trying to understand the killer, asking whether he was a disturbed lone wolf or a member of a right-wing extremist network who acted out of conviction.

Casseri was born in 1961 in the small village of Cireglio "when man conquered outer space and the biggest lunar eclipse of the 20th century darkened the sky," according to his profile on his homepage soronel.it, a site dedicated to author J.R.R. Tolkien.

At age 12, he read the supernatural horror stories of American author Howard Lovecraft, which sparked an interest in fantasy literature. He became a bookkeeper, also founding his own magazine in 2001. It is in his writings that his worldview comes into focus. In an essay entitled "The Protocol of the Wisemen from Alexandria," he rails against what he describes as a Jewish world conspiracy and denies the Holocaust. Online he carried on about the "Aryan race."

"When one reads his texts, it's easy to recognize that he was at risk, but no one recognized it," psychoanalyst Stefan Pallanti told the Florence daily La Nazione. But Italian sociologist Chiara Saraceno warned the national newspaper La Repubblica: "This is not madness, it's racism."

Casseri's colleagues and girlfriends have described him as introverted, secretive and depressive. "He's the classic lone wolf," said Saverio Ferrari, an expert in right-wing extremism and head of the anti-fascist watchdog blog Osservatore democratico. "These kinds of criminals nurture their crude ideas in silence, at some point deciding to act. Then they believe that they are acting on behalf of a group to express their hatred of the circumstances."

Meanwhile, Casseri has been become a hero of the right-wing extremist scene in the country, praised as a true Italian and a "white hero" worthy of renown and respect on the racist website stormfront.org. Casseri "cleaned up," a task for which he deserves thanks, a statement on the website read.

A support group on Facebook entitled "Gianluca died for us" has already been "liked" by more than 6,000 users. Comments include this one: "Florence was only the beginning. We'll clean up all of Italy." A "fascist delirium" has broken out in the country, daily La Stampa wrote on Wednesday.

For right-wing extremists, the reasons behind the killings are obvious. The situation has long been unbearable, the multi-ethnic society ticking "like a time-bomb about to explode," anti-Semitic website NonConforme wrote.

Old-school fascism in Italy has been replaced by even more radical and dangerous symbols of neo-Nazism, said right-wing extremist expert Ferrari. "In the last 10 years we've observed a big leap in right-wing currents across Europe," he told SPIEGEL ONLINE.

One of the newer neo-fascist groups, where Casseri is alleged to have found his ideological home, is called Casa Pound. Named after American poet Ezra Pound, who was an avid admirer of fascist Italian leader Benito Mussolini, the group has gathered a number of new members over the last two years, boasting some 50 offices nationwide. Casa Pound has a reputation for being young and trendy, squatting in houses and demonstrating against high rents, in addition to staging plays and running its own student organization.

In Germany, right-wing extremists are reportedly very interested in the up and coming group. According to Patrick Gensing of public broadcaster Norddeutsche Rundfunk, the far-right National Democratic Party (NPD) in northern Saxony held a talk about the group in 2010. The neo-fascist group has also been the topic of interest at the NPD's "Institute for Homeland and National Identity," where they are exploring ways to construct a "cultural revolution from the right" that appeals to young voters.

"Casa Pound has managed to create an attractive setting for young people by combining pop-culture and neo-fascism," said Hamburg historian Volker Weiss. "Along with this comes linking aesthetics and violence, which has a tradition in Italian fascism."

'A Dog Without an Owner'

But on Wednesday Casa Pound distanced itself from the killings. Though the group clearly rejects "mass immigration," a statement on its website noted that it opposes xenophobia and discriminatory violence.

The group also downplayed Casseri's role within the organization. "Gianluca Casseri was a sympathizer of Casa Pound Italia, like hundreds of other Tuscans," the site reads. They acknowledged that he had visited the group's office in the province of Pistoia, but said he had not been militant. "We ask no one for proof of their mental integrity," it added.

"He had nothing to do with us, that was a dog without an owner," said one of the group's activists on Wednesday. But Casseri did write for Ideodromo, a site run by Casa Pound, though on Wednesday at least five of his articles were no longer accessible online.

"Casa Pound wants to erase evidence, that is clear," said right-wing extremism expert Ferrari. "The connection between Casseri and the organization was not accidental." Casseri also reportedly took part in the Milan opening of a new Casa Pound location. "It was his environment, he was indoctrinated here," Ferrari added.

The question of whether Casseri may have been inspired by recent reports on the murderous neo-Nazi Zwickau cell in Germany remains an open one. "That is possible, but not documented," Ferrari said. "What is certain is that European right-wing radicals are well-networked. There are always NPD members coming to Italy for exchanges with like-minded people locally."

In recent years, Italy has often been criticized for its approach to non-European foreigners. The shootings that took place on Tuesday are "the result of policies made of hatred, fascism and racism," said Izzedine Elzir, a Florentine imam.

But the attacks seem to have motivated Italian authorities. On Wednesday, police in Rome arrested five right-wing extremists who allegedly belong to the banned fascist organization Militia. Investigations into at least eight suspects are underway and a number of home searches have been carried out, authorities reported.

"The terrible murders could be the impetus to finally think about this and draw some conclusions," Ferrari said. "Either way, Italy will react."