At least one participant said what he meant at the beginning of the marathon of European Union summit meetings. The inability of European leaders to come up with a unified response to the euro-zone currency crisis, Euro Group head Jean-Claude Juncker said on Friday, has given the region a "disastrous" image.

It was a statement which quickly became the most quoted comment of the entire weekend. After all, it is a concise description of how most observers see the ongoing negotiations in Brussels.

By the time it is finished, this summit will have stretched over six days, a record even for the EU. From Friday afternoon until Wednesday evening, there is an unremitting series of meetings: First the euro-zone finance ministers are meeting, then the EU finance ministers, then the euro-zone ministers again, then the EU foreign ministers. After that comes a mixed group including finance ministers, heads of government and leaders of international organizations. Then a face-to-face between German Chancellor Angela Merkel, French President Nicolas Sarkozy and Italian Prime Minister Silvio Berlusconi. Then all the EU heads of government together before just the euro-zone leaders meet. It is a dizzying list of gatherings that won't end until the middle of the week. 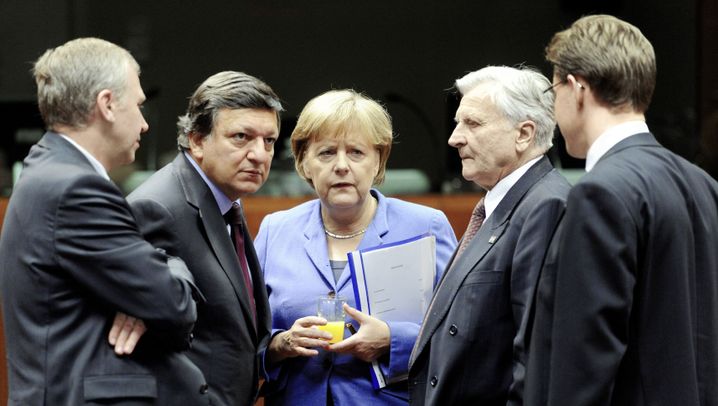 No decisions, however, are to be announced until mid-week. "It is important to me to say one more time: Today we are preparing the decisions for Wednesday," said Merkel on Sunday. "That is important, because the issues involve very complicated processes."

Still, Merkel and the others have found time for some brief moments of light-heartedness. The German chancellor presented Sarkozy, for example, with a new teddy bear for his newborn daughter Giulia. Sarkozy also managed a smile when, after France lost to New Zealand in the rugby World Cup final, Merkel joked "second place is also a nice place."

Aside from that, however, the atmosphere amid which the weekend meetings took place has been leaden with the negotiations making only excruciatingly slow progress. Several press conferences have been postponed or cancelled for lack of anything to announce and nerves are becoming frayed. Polish Prime Minister Donald Tusk, who currently holds the EU's six-month rotating presidency, spoke of "dramatic" speeches held during meetings. He said that everyone is aware that the next three days are decisive for Europe's future. And yet, success is far from assured. 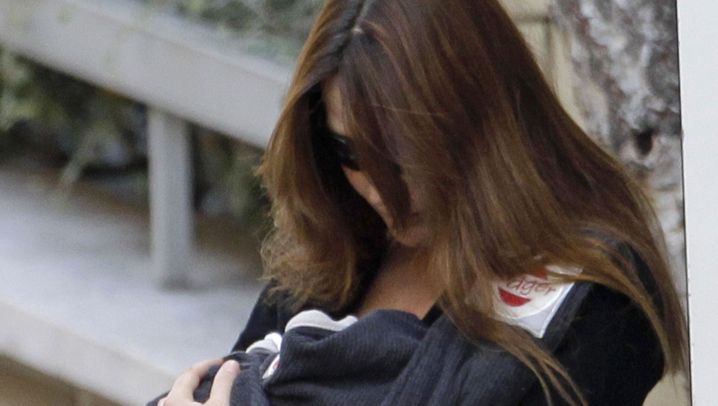 Indeed, more than anything, the European Union would seem to be living up to its reputation for being unable to move quickly when the situation demands it. The United States and China have both urged alacrity out of fear for their own economies. British Prime Minister David Cameron has also been vocal in demanding action -- for which, according to the Guardian, he was told by Sarkozy on Sunday that "you have lost a good opportunity to shut up."

Indeed, even Juncker himself has shown signs of losing patience. He told SPIEGEL that "the pace of organization in Berlin is slower than in other capitals."

But the EU leaders have refused to be rushed. Indeed, at the insistence of Poland and the United Kingdom, there is yet another summit being planned for Thursday so that the 10 EU member states which are not part of the euro zone can rubber stamp the decisions announced on Wednesday.

Criticism of the process has not been well received. "It is much easier to comment than it is to take action," Sarkozy said after the first day of meetings. The issues are simply too complex, he said. Standing next to him, Merkel agreed. No expert can tell her with 100 percent certainty which moves are the right ones, she said. Which is why, she added, one has to constantly reflect on what steps are consistent with the political responsibility European leaders bear.

The decisions the EU is working toward this week are far-reaching indeed. They hope to come up with a plan for Greece which could include a debt haircut worth up to 60 percent. Because such a move could destabilize several European financial institutions, EU leaders are also working on a plan to recapitalize banks, to the tune of €100 billion ($139 billion). Finally, and perhaps most controversially, the EU is looking into ways to increase the impact of the euro backstop fund, the European Financial Stability Facility (EFSF). The idea is to boost its current size from €440 billion to several times that.

Most of all, however, Europe hopes that the package of decisions announced on Wednesday will go far in convincing the financial markets of the euro zone's commitment to saving the common currency. The EU economy, said European Council President Herman Van Rompuy, "must regain safe ground."

But the road to that point promises to be a bumpy one -- more full of potholes than expected. Even the relatively uncontroversial step of recapitalizing the banks consumed hours of the finance ministers' time on Saturday. Spain, Italy and Portugal have all balked at the proposal. They fear the capital injections for their financial institutions could overwhelm national budgets, and they instead want to be able to tap into money from the EFSF. Merkel, however, has made clear that money from the rescue fund will only be provided under strict conditions.

Merkel and Sarkozy, who are simply called "Merkozy" by many in Brussels, also applied pressure to Berlusconi at the summit. On Sunday morning, the two sought to convince him that his country needs to finally begin introducing serious measures to cut Italian debt as well as undergo structural reform, telling him to "do his homework" just like every other member of the euro zone. When Merkel and Sarkozy were later questioned by reporters about the alleged telling-off of the Italian leader, they both smiled. Asked whether they still had trust in Berlusconi, Merkel said coolly, that as the leader of a major EU country, he remained the person in charge. "Of course we rely on him," she said. "Italy has great economic strength, but Italy also has a very high level of public debt that must be reduced in the coming years in a credible manner."

The German-French duo also took pains to refute reports of differences of opinion between them. At a meeting at the Alte Oper concert hall in Frankfurt last Wednesday, the two reportedly clashed seriously. But on Sunday, the two held a joint press conference -- the traditional means used to demonstrate harmony. Still, both appeared very serious. There was no joking around between "Angela" and "Nicolas." It was all business between the German chancellor and the French president.

The traditional Franco-German motor of Europe is sputtering, and that's no secret in Brussels. One diplomat described the dilemma as such: France wants to lead, but it can't because of its economic weakness. Germany, on the other hand, has the economic strength, but doesn't want to lead. Nevertheless, Merkel did succeed in putting a stop to the idea of the EFSF being given a banking license. Sarkozy had wanted to use the provision as a way of allowing the EFSF access to funds worth €2 trillion. But both Germany and the European Central Bank were opposed. "No solution is viable if it doesn't have the support of all the European institutions," Sarkozy said over the weekend.

Without Banks Agreement, Deal Could Collapse

Still, it remains an open question as to how the impact of the EFSF will be magnified. Two solutions are still under discussion, both of which are variations of the bond insurance idea championed by Germany. Merkel reminded her colleagues that the German parliament, the Bundestag, would need a written draft by Monday night of how the EFSF is to be reformed. The German parliament's right to co-decision on important matters pertaining to the euro bailout is one of the reasons that the summit has been stretched out over a period of several days. And while some have demonstrated sympathy for Merkel's problems, others have been irritated by the extra burden the co-decision has created. Berlin isn't the only place with a parliament, Luxembourg Prime Minister Juncker said pointedly.

Another sticking point over the weekend was Greece. Right at the opening of the summit on Friday, the troika consisting of the ECB, the International Monetary Fund and European Commission shocked finance ministers of the euro group with their latest Greek debt sustainability report. It states that Greece won't be able to return to the financial markets until 2021 -- and will need at least €252 billion in funding until then. In July, EU leaders had agreed in principle to a new bailout package for Greece worth €109 billion, but it has become apparent in recent weeks that Athens will need much more than that.

But the new total comes as a shock nonetheless. In order to come up with that kind of money, euro-zone member states will either have to considerably increase the bailout fund -- or banks would have to write down 60 percent of the Greek debts they hold. The EU leaders are hoping to reach a deal on the latter issue during the next few days. But so far banks have been unwilling to accept a Greek debt haircut on such a large scale. Currently, they are offering write-downs of 40 percent instead of the 21 percent agreed to in July. The banks are also reportedly pushing for billions in euros in safeguards for the purchase of new government bonds for Athens. It's questionable whether an agreement can be found by Wednesday. Nor can the banks be forced into a deal, given that the ratings agencies have said they would view that as tantamount to a Greek insolvency, with incalculable consequences.

If the banks don't play along, though, the entire rescue package could be imperilled. Merkel has emphasized that the planned steps complement each other and that they can only be agreed on together. She also reiterated what, by now, should be clear to every observer: Wednesday will not be the last meeting of the EU officials in their attempt to save the euro.