The US president is traveling a lot these days -- and a clear pattern has emerged. The deeper into the United States it takes him, the better -- be it Nashua, New Hampshire or Tampa, Florida. The issue is always the same: How can Barack Obama create more jobs? 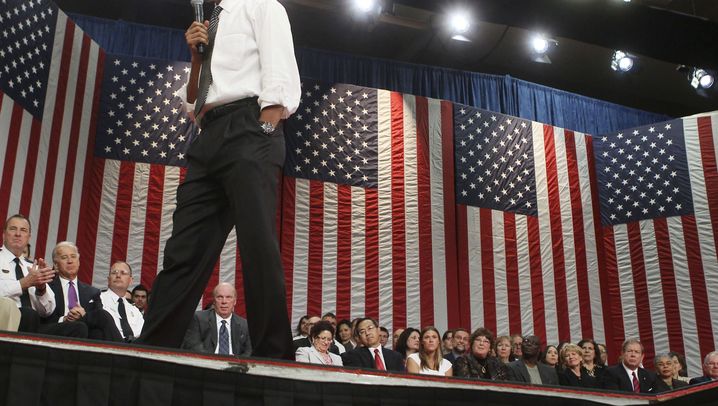 The message, though, couldn't have been any clearer. The president has plenty of time in his schedule to visit Australia and Indonesia in March. The Wall Street Journal recently sneered that the Europeans, so enamored of Obama, must be missing the Bush years. Bush, at least, diligently attended each EU-US summit. As the Washington Post wrote, though: "Unlike most of his predecessors, Obama has not forged close ties with any European leader."

Obama Has No Need to Talk To Europe

Obama may have made six brief trips to Europe during his first year in office, but the European Union has slipped far down on his priority list. The Europeans are none too pleased. Spanish Prime Minister Jose Luis Zapatero defiantly told a confidant that the US shouldn't forget that Europe is "an economic power and an important political actor."

But Obama's decision to cancel is hardly surprising. For starters, there are no fires in Europe right now that Obama needs to attend to. With his popularity falling at home, Obama needs to focus on delivering results in the US. Right now, the last thing he needs is more European photo ops without concrete results.

From Obama's perspective, that is exactly what the EU-US summit would have been like. "The Europeans shouldn't be surprised," says Annette Heuser of the Washington office of the Bertelsmann Stiftung, a German think tank. "They turned this summit into a show rather than finding issues -- like energy policy -- where both have a common interest in working together."

Who Gets To Shake Obama's Hand First?

All too often, Europe gets lost in diplomatic protocol. The issues up for discussion between US and EU leaders can become secondary. Most seem primarily concerned with who gets to shake Obama's hand first or who will sit next to him during the meal. Such questions are debated for weeks among protocol-obsessed bureaucrats in Brussels.

At the Madrid summit, the unassuming Belgian Herman van Rompuy, who has been president of the European Council since December, was insistent that he be the first to greet Obama.

But advisers to Zapatero, the Spanish host, refused. After all, the Spanish prime minister also currently holds the position of "president of the European Council." The EU, as it happens, is still holding on to its tradition of bestowing a rotating "presidency" on a different EU member state every six months. And that suited Spain well. Gustavo de Aristegui, the spokesman for foreign affairs in Spain's opposition Popular Party, quipped that Zapatero was seeking to portray himself as the "center of the universe."

A compromise was eventually found. Zapatero would get to say the first "hi," Rompuy would then be able to sit to the right of Obama at dinner. But soon enough, other EU top brass voiced complaints. The seat planned for Rompuy was actually a privilege reserved for European Commission President Manuel José Barroso, who is in third place on the current scale of most important people in Brussels.

And what about Catherine Ashton, the EU's new "high representative for foreign and security policy"? Her role at the summit hadn't even been addressed.

The skirmishing does little to dispel the unfavorable impression Americans have about Europe's foreign policy -- an image resulting from Obama's first-hand experience during previous visits here.

In April 2009, Obama experienced essentially the same round of talks at summit meetings in London, Baden-Baden, Germany, and Strasbourg, France. The EU-US summit in Prague followed immediately after -- organized by a Czech government that had just lost its majority in parliament and had little to say. One Obama aide complained that 27 European leaders had chatted the president's ear off -- all essentially saying the same things.

Governing via summits is in vogue in Europe these days. The leaders of the EU member states have met 10 times in the past 18 months. Mostly, they exchanged small talk and produced few results at meetings organized by protocol-obsessed bureaucrats in the host countries.

Politicians in Washington are perplexed by the herd instincts of the political caste on the other side of the Atlantic. The situation was supposed to improve with the Lisbon Treaty, but the opposite has proven to be the case. The French daily Le Figaro reported that, during a recent visit to Brussels, Mongolian leader Tsakhiagiin Elbegdorj complained that he had just "been received by the European Council president, yesterday by the president of parliament and that he was just about to meet with the president of the European Council. Uh."

Europe seems intent on using etiquette to compensate for its diminishing role on the world stage. No one wants to admit what everyone can see: Europe's voice doesn't move anyone at the moment -- neither future major powers, like India and Brazil, nor leaders in Washington, Moscow or Beijing. And how could it? The EU may be a successful economic community, but it is just as deeply divided on questions of foreign and security policy as it is on issues like climate change and inner security.

When it comes to foreign policy, each member state is looking out for its own interests. This is particularly clear when it comes to relations with the United States. The Brits continue to guard over their "special relationship," French President Nicolas Sarkozy always tries to edge his way to Obama's side in group photos -- and then the Spaniards wanted to use the US-EU summit to bask in the spotlight.

Now officials are searching for a substitute date for the EU-US summit -- possibly in the autumn, when Obama plans to fly to Portugal for a NATO summit. But the more important question is whether European leaders have really listened to the "wake-up call for Europe" that many EU observers are speaking of following this American affront.

The first reactions haven't been very encouraging. Zapatero traveled to Washington right after Obama's cancellation. The Spanish prime minister didn't manage to get an official appointment with the US president, but he did meet with him briefly at the National Prayer Breakfast, an annual event held in a large hotel in the US capital with thousands of participants. To add insult to injury, not even Vice President Joe Biden had time for him.

"The Europeans," said trans-Atlantic expert Annette Heuser, "are pleased to get breakfast appointments in Washington these days. But when it comes to important lunches and dinners, they are no longer present."