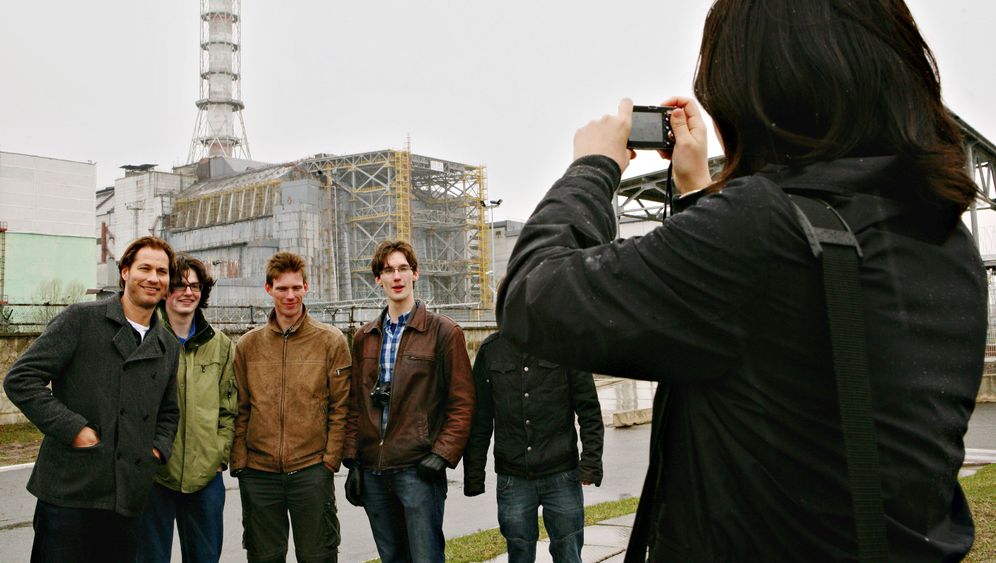 Photo Gallery: Snapshots of the Apocalypse

Yuri Tatarchuk is standing in front of a group of visitors from Europe, Asia and America. The 38-year-old tour guide is built like a wrestler and is wearing combat boots and army fatigues.

Tatarchuk hands out Geiger counters, distributing tidbits of well-intended advice as he does so. "Distance is the best protection," he says. "Panicking doesn't help."

The tourists look at Tatarchuk's t-shirt with curiosity. The slogan on the garment, which is stretched a little over his belly, reads "Hard Rock Cafe Chernobyl." It is Tatarchuk's ironic take on the tourist development of the exclusion zone around the destroyed Chernobyl nuclear plant in northern Ukraine.

He earns his living as a tour guide in the contaminated zone around the reactor, which exploded on April 26, 1986. Jobs are scarce for men in their late 30s in rural Ukraine, and Tatarchuk says he was too old to be picky.

Some 130,000 people fled the area in 1986, when reactor No. 4 of the Vladimir Ilyich Lenin Nuclear Power Plant exploded. Lethal radioactive dust landed on the streets and houses. Two cities and dozens of villages had to be abandoned because radioactive substances such as cesium-137 poisoned the soil, water and air. Now, 25 years later, people from all over the world are voluntarily setting foot on the contaminated land.

'I Lead a Dangerous Life'

For her visit to the danger zone, Margarita from Italy has chosen to wear leopard-print linen shoes and pink lipstick. Her eyebrows are dyed lime green, her dark hair blond. "I lead a dangerous life," says Margarita, who is in her mid-twenties, in a breathy voice. "All the dye in my hair is also harmful to my health."

The tour group strolls past a Ferris wheel in the city of Pripyat. The Soviets built the attraction in the 1980s, but it was never opened, because Pripyat was evacuated after the nearby nuclear reactor exploded. Today, tourists like Margarita can explore the amusement park. Most of them say they are in favor of nuclear energy, describing their attitude as "pragmatic." They are mostly interested in seeing what life is like in the aftermath of a nuclear apocalypse.

"As long as North Korea is still closed, Chernobyl is the ultimate kick," says Margarita.

The day trip to the danger zone costs $100. The price includes lunch in the power plant's cafeteria. Radio stations in the capital Kiev advertise the tours with the slogan "Visit Chernobyl." The Ukrainian government has announced plans to increase the annual number of tourists from 60,000 to 1 million. Ever since the Fukushima nuclear accident, the tours have been booked out.

An air-conditioned Mercedes bus brings tourists to the reactor, the heart of the "Zone of Alienation," as the exclusion zone is officially called. Inside the vehicle, a modern plasma television shows "The True Battle of Chernobyl," a docu-drama with a stirring soundtrack and animated Hollywood-style explosions. Through the windows of the bus, abandoned villages can be seen passing by.

Cracks in the Sarcophagus

Henrik Björkman is sitting sprawled out on a comfortable leather seat. An engineer by trade, Björkman is from Sweden, a country that already decided to phase out nuclear power 30 years ago. Since then, however, the government has lifted the ban on building new reactors, and supporters of nuclear power are in the majority, even after Fukushima. "I'm quite positive about nuclear power," says the engineer, adding that he is not afraid of a nuclear accident. "There are no tsunamis or earthquakes in Sweden."

The bus stops in front of Reactor Block 4, where a black steel and concrete sarcophagus rises into the sky. In 1986, Moscow sent over half a million men to put out the fire that was burning in the crater left by the explosion. The men took 202 days to build the protective cover known as the sarcophagus to seal off the reactor. But the tourists' Geiger counters crackle nevertheless -- the sarcophagus has many cracks and holes in it.

Tsuyoshi Otake, who has gray hair and is wearing a gray windbreaker, pulls out his pad and takes notes. As Europe correspondent for the Japanese business magazine Nikkei Business Publications, the respected reporter normally spends his time analyzing the earnings outlooks of global companies. Now he has been tasked with writing about the prospects for nuclear power in his native Japan. "Objectively speaking," Otake says, "Japan can not do without nuclear power." He plans to file a story on how the example of Chernobyl can be useful in dealing with the Fukushima disaster.

Some 7,000 people are still working in the restricted zone, says Yuri Tatarchuk, the brawny tour guide. They maintain the old power plant, whose last working reactor only went offline in 2000. They are also responsible for securing the sarcophagus and the exclusion zone, which is twice as large as the German state of Saarland.

Tatarchuk asks Otake whether he still trusts "information from the government," despite the Fukushima disaster. The Japanese reporter replies with a shy nod.

"All governments lie," says the Ukrainian, with a laugh. "Including the democratic ones. Japan is a democracy, right?"

Tatarchuk is distracted from the conversation by two Swedish tourists, who, carried away by their desire to take snapshots, have gotten too close to the sarcophagus. He blows his whistle to bring them back, as a French tourist asks Otake if he is familiar with the expression "deja vu."

A sign marks the entrance to the town of Pripyat, where a few faded plastic flowers blow in the wind. The Geiger counters show 20 times the normal level of radiation. A blonde Ukrainian woman looks at her meter and says there is "very little" radiation here. She sounds disappointed. She explains that the radioactivity in some Kiev neighborhoods was even higher.

The 1986 disaster caused all the plants in the area to wither. The local wood is still called the Red Forest, Tatarchuk explains -- the leaves of the trees were discolored as a result of the accident.

Pripyat was a model socialist city for 50,000 people. From the top floors of the buildings, residents could look out on the pride of the city: the reactor. Pripyat was evacuated just hours after the explosion. Today, the houses and streets in this modern Pompeii are overgrown with trees. Exercise books still lie on the tables in the classrooms of School Number 3. "My fatherland is the USSR," can still be seen on the page, written by a first-grader 25 years ago.

Tsuyoshi Otake walks silently through the ghostly corridors. Verses emblazoned on the walls talk of "heroic deeds in the name of the happiness of all peoples" -- a macabre reminder of Soviet optimism about unstoppable progress.

On the fourth floor, hundreds of gas masks lie strewn on the floor among books and toys. They are so small that they could only fit on the heads of elementary school students.