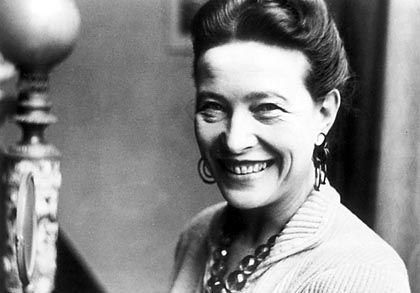 French existentialist writer and feminist Simone de Beauvoir: "One is not born a woman, one becomes one."

She always kept a stiff upper lip, even in the face of death. When her life partner of more than 50 years lay in his "small box" -- one from which he would never emerge, and where she would never be able to reach him again -- she soberly concluded: "Even if I am buried next to you, there will be no transition between your ashes and my remains."

Simone de Beauvoir remained true to her materialistic convictions. She had long renounced the piety of her Catholic upbringing and her belief in heaven when, at the age of 14, she defiantly told her mother: "I will no longer go to mass."

Death separated Simone de Beauvoir and Jean-Paul Sartre instead of uniting them, and yet they were the couple of the century. When she died on April 14, 1986, almost six years to the day after Sartre's death, the protest movement of 1968 finally came to an end. The funeral procession in Paris was the last rally of the revolution. Waiters from the Brasserie La Coupole formed an honor guard along the street, their white napkins thrown over their left arms, to pay their last respects to a woman who had long been their loyal and prominent guest in Montparnasse, traditionally a Paris neighborhood of intellectuals and artists.

The small square in front of the Church of Saint-Germain-des-Prés in Paris bears her name today, together with that of Sartre, as does a small pedestrian bridge leading to the new national library. The notion that her name would be associated with a bridge to books would undoubtedly have pleased Simone de Beauvoir.

Now the two are united after all, at least in this small way. Ironically, Beauvoir was always adamant about preserving her independence, her desire for freedom, her joie de vivre, her curiosity and her need to write.

One hundred years after her birth on Jan. 9, 1908, French writer and philosopher Simone de Beauvoir remains a pioneer for generations of women and an author who practiced emancipation in her life and whose books established the theoretical underpinnings of modern feminism. Beauvoir's cult classic, "The Second Sex," as well as her multi-volume memoirs, decisively shaped the debate over the relationship between men and women.

"Of course, the legacy of Beauvoir cannot be limited to the feminist aspect," says Alice Schwarzer, a prominent German feminist who met Beauvoir in the 1970s and for whom the French writer served as a role model. "But there is not a single sentence that was not instilled with the notion that she was a woman in a man's world."

A number of new books and biographies are attempting to take a new look at Simone de Beauvoir, to discover something new and surprising in her works, and especially to recognize the clarity, integrity, sense of justice and boldness of her visions. 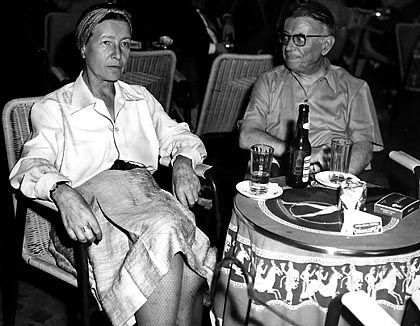 Jean- Paul Sartre and Simon de Beauvior: the couple of the century

It is not just her books but also her life that have made Beauvoir the most important female intellectual of modern times. She was a thinker in her own right, and not just an appendage of Sartre, the uninhibited seducer.

Born into a middle-class family and educated at good schools, from the beginning Beauvoir refused to buy into the notion -- considered a matter of course in the bourgeois society of the day -- that beauty and intelligence are incompatible.

A girl was meant to marry and have children. If a family lacked the means to provide a daughter with a respectable dowry, and if a girl was not sufficiently attractive to seduce a man of means, she had to fend for herself.

In "The Second Sex," which was published in two volumes in 1949 and was considered so scandalous that it became an overnight success (22,000 copies were sold in the first two weeks), Beauvoir examined the question of what it means for half of humanity to be defined, debased, praised and generally dominated by the other, often less intelligent and usually more emotionally deficient half.

The essay struck society like a bombshell and condemned its author to a quasi-demonic, lifelong perniciousness. Readers and the media alike called her everything from sexually unsatisfied to frigid, a nymphomaniac, lesbian, emasculating and a child-hater.

She received hate mail filled with offers -- often expressed in the crudest and most offensive of terms -- to cure her, to satisfy her desires and to open her eyes so that she could discover truth, beauty and decency. The writer François Mauriac, a good Catholic and a respectable man to boot, was disgusted by her ideas and disparagingly wrote to the staff of the review she co-founded: "Now I know everything about your boss's vagina." Even Albert Camus, a humanist of deep convictions, couldn't abide intelligent women, as Beauvoir quickly noticed. Uncomfortable in her presence, he would either poke fun at her or ignore her, depending on how irritated he was. "His tone when speaking with me was usually sarcastic and often offensive," she wrote.

And yet even Beauvoir sensed that there was something not quite right about her revolutionary thesis, "one is not born a woman, one becomes one."

Twenty years after "The Second Sex" was first published, author Suzanne Lilar wrote a brilliant critique of this groundbreaking work of modern feminism, an article that at least persuaded Beauvoir to admit to the genetic, hormonal and anatomical differences between the sexes. Nevertheless, she remained steadfast, and rightfully so, in her conviction that culture shapes our perception of femininity, a perception that constantly fluctuates between idealization and demonization.

"Women, you have her to thank for everything!" Elisabeth Badinter, a women's rights activist and author influenced by Beauvoir is said to have called out at her funeral. French existentialism analyzed man as a radically free person who invents himself through his actions instead of being driven by circumstances. But are all people free to act?

In her memoirs Beauvoir, who had to remove herself from her milieu to assume her place in history, wrote that she felt "betrayed." But the radical avant-gardist that she was -- worshiped and despised, a true loner, by no means merely a companion or a medium for the more celebrated Sartre, with whom she shares a grave in the cemetery at Montparnasse -- opened the eyes of generations of women the world over.