Virtually nothing is more sacred to Germans than their constitution, which is known as the Basic Law. It was originally planned as a stopgap measure, but it has seen the Federal Republic of Germany through the past 62 years. During the Cold War, political parties may have squabbled over conservative Chancellor Konrad Adenauer's political commitment to Western Europe and the United States -- and they had their differences over left-leaning Chancellor Willy Brandt's Ostpolitik policy of normalizing relations with communist Eastern Europe, particularly with East Germany -- but they immediately and unanimously praised the Basic Law. "We have one of the best constitutions in the world," German Chancellor Angela Merkel once said.

Now, it looks as if Merkel herself may order an overhaul of the German constitution. At the party conference of the chancellor's conservative Christian Democratic Union (CDU) which commenced on Monday morning, Nov. 14, it is expected to approve a plan that could change the face of Europe -- and perhaps make it necessary for the Germans to rewrite their constitution.

This operation to amend the constitution has already become one of the government's most delicate political initiatives. If it succeeds, it would remove one of the euro's biggest problems: The 17 euro-zone countries have a common currency but do not have a common finance policy, a fact which partly explains why the euro is teetering at the edge of an abyss. This is tackled in the key sentence of the new paper. "We need more Europe in key policy areas," it says.

Merkel hesitated for a long time before making such a statement in public. It was three quarters of a year ago that German Finance Minister Wolfgang Schäuble reportedly took the chancellor aside and explained to her that the euro crisis could not be resolved with spur-of-the-moment policies. He told the chancellor that he was in favor of using the crisis to advance Europe's political unity.

At the time, Merkel rejected the idea. A reform of the European Union treaties would never meet the approval of French President Nicolas Sarkozy, she reportedly said -- but that was only half the story. Merkel was also afraid of the German Constitutional Court in Karlsruhe: In its ruling on the Lisbon Treaty, the court made it clear that the German constitution allows for practically no further transfers of power to Brussels.

Consequently, Germany's policy on Europe stagnated for months. The chancellor managed to put out the fires sparked by the currency crisis, but she still needed to convey a fundamental vision of the future of the monetary union. As the grumbling about her aimless policy on Europe grew louder, she changed course. After the CDU had shed its political skin so many times, she didn't want to reap criticism for allegedly abandoning the party's legacy on European policy.

She convinced Sarkozy that there could only be one effective response to the tottering euro project: The monetary union had to be revamped. And she yielded to Schäuble and gave the CDU party conference a new focus: European policy.

The resolutions made at the party conference will not be empty words. Instead, Merkel and Schäuble want them to serve as a foundation of a two-stage plan to reform the EU. As a first step, they want to amend EU treaties to allow notorious debtors in the euro zone to be placed under mandatory supervision by Brussels.

They aim to make the Stability Pact more binding in the future. That would mean the European Court of Justice could take action against budget offenders. If necessary, even a Brussels cost-cutting commissioner would be able to keep budget offenders on a short leash. According to the plan, this individual would have the power to draw up guidelines for a debtor country's budget - without, however, being able to influence details such as tax law and social policy.

The Chancellery wants this aspect of the EU reform approved as quickly as possible. Merkel wants to show the financial markets that Europe has the strength to push through sweeping changes. Internally, Merkel's staff expect that the EU reform convention will complete its work by the end of next year, a view shared by CDU parliamentary floor leader Volker Kauder.

As a second step, Merkel and Schäuble want the EU to move towards becoming a political union. This entails transferring more sovereign rights to the EU -- and it would mean amending Germany's constitution. This could either be accomplished under Article 23, requiring a two-thirds majority in Germany's federal parliament, the Bundestag, as well as the Bundesrat, the upper legislative chamber that represents the states -- or, as a more challenging alternative, under Article 146 of the constitution, in other words, through direct participation by the people. Article 146 is a tool that allows for the drafting of a new constitution following a national referendum.

This may all seem somewhat far-fetched, but there are members of the German government who are openly speculating this may happen. Schäuble believes that a national referendum on the German constitution would be an essential step in reforming the EU -- and with good reason, since the constitutional judges in Karlsruhe have now made it clear on a number of occasions that the constitution leaves little leeway to relinquish more power to Brussels.

This is precisely the point where opinions diverge sharply within the ranks of the government. The Foreign Ministry believes that the CDU's ambitious plans would, at best, be suitable for an introductory seminar on European politics -- but not in practice. Ministry officials would be happy if the EU states could agree on a few instruments to bring the euro crisis under control.

In a six-page paper published by the Foreign Ministry ("Required Integration Policy Improvements for the Creation of a Stability Union"), they write that to amend the EU treaties "a ('small') convention that is precisely limited in terms of content should be called quickly," which would then "rapidly" present proposals.

The Bavarian sister party to the CDU, the Christian Social Union (CSU) -- which also shares power in the federal government coalition with the CDU -- flatly rejects a complete reorganization of EU bodies. EU opponents currently call the shots in Bavaria, such as German Interior Minister Hans-Peter Friedrich, who even voted against the Constitutional Treaty, which was never ratified and was eventually superseded by the Lisbon Treaty. "Every disempowerment of national parliaments leads us further away from democratic processes," he says.

The CSU intends to resist further transfers of power to Brussels. The answer to the currency crisis is not more Europe, but rather less, argues CSU General Secretary Alexander Dobrindt. "When it comes to talking some sense into debtor countries that are unwilling to reform," he says, "this won't be achieved by (EU Commission President José Manuel) Barroso or (EU Council President Herman) Van Rompuy, but rather it can only be accomplished by Merkel and Sarkozy." Dobrindt contends: "It would be grossly incorrect, especially now during the crisis, to weaken the stability of the nation states and delegate the struggle to resolve the crisis to the relatively unsuccessful eurocrats in Brussels."

Now, the members of Merkel's governing coalition of the CDU/CSU and the business-friendly Free Democratic Party (FDP) are racking their brains in Berlin to find a way to meet the demands of the judges in Karlsruhe. The conservatives' parliamentary secretary Peter Altmaier, for instance, recently went to Karlsruhe to find out how the judges view the prospect of future European integration with regard to constitutional law. Ultimately, the conservatives calculate that the judges won't dare to stand in the way of European unity.

The Social Democrats appear to be hoping that, in the run-up to the next parliamentary election, Germany's current center-right coalition will become mired in a dispute over fundamental principles on Europe.

Thomas Oppermann, the SPD's parliamentary secretary even envisages holding a national referendum on the day of the Bundestag election in the fall of 2013. "That would have a certain appeal because then all political parties would have to put their cards on the table on the issue of Europe." 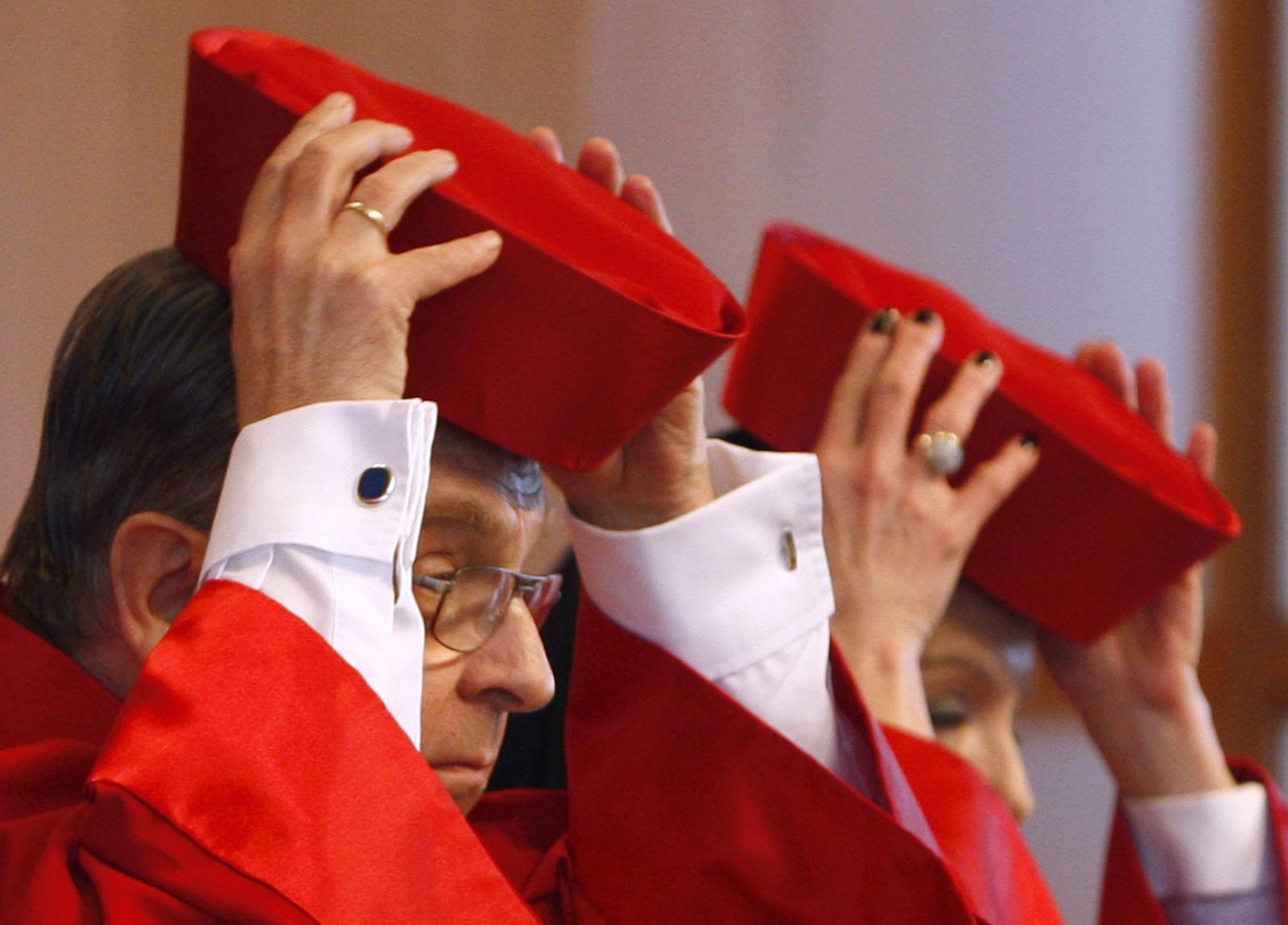