Portugal has asked the European Union for a bailout, following in the footsteps of Greece and Ireland to become the third euro-zone member to request help from Brussels.

The country's caretaker prime minister, Jose Socrates, announced on national television Wednesday that Portugal needs international assistance in order to save its struggling economy. Socrates said his caretaker government had asked "for financial help, to ensure financing for our country, for our financial system and for our economy."

"I tried everything, but in conscience we have reached a moment when not taking this decision would imply risks that the country should not take," Socrates said. "This is an especially grave moment for our country. And things will only get worse if nothing's done." It was the first time that the prime minister had admitted that the country needed external help, after months of denying he would ask the EU for a bailout. "It's in the national interest," he added.

Socrates did not give details about how much money Portugal would ask for, but analysts expect the sum to be up to €80 billion ($114 billion). Finance Minister Fernando Teixeira dos Santos had earlier said that the government would ask Brussels for help "immediately."

In a statement, European Commission President Jose Manuel Barroso said that Socrates had informed the EU on Wednesday about the request for assistance. Portugal's request would be processed "in the swiftest possible manner, according to the rules applicable," he said, and spoke of his "confidence in Portugal's capacity to overcome the present difficulties, with the solidarity of its partners."

The International Monetary Fund said Wednesday night that it had not yet received a request for help from Lisbon. "We stand ready to assist Portugal," the organization said in a statement. Germany, the biggest economy in the euro zone and as such the largest contributor to bailouts, insists on IMF involvement as a precondition for rescues.

The EU's Economic and Monetary Affairs Commissioner Olli Rehn told the news agency Reuters that the request for help was "a responsible move by the Portuguese government for the sake of economic stability in the country and in Europe." He said the exact amount of aid would be determined shortly. The bailout is expected to be discussed at a previously scheduled meeting of European finance ministers in Budapest on Thursday.

Prime Minister Socrates resigned on March 23 following the opposition's decision not to support his minority government in getting its latest package of austerity measures -- the fourth in under a year -- through parliament. He is staying on as caretaker prime minister until elections in early June.

There had been doubts as to whether the country's constitution would allow an interim prime minister to apply for a bailout, but Socrates said on Wednesday he hoped the opposition would support him in the move. Pedro Passos Coelho, the leader of the main opposition party, the center-right Social Democrats (PSD), said he supported the aid request. "This needs to be seen as the first step in not hiding the truth," he said Wednesday, reacting to Socrates' announcement.

Portugal had little choice but to ask for outside help after the yields it was forced to offer on its sovereign bonds in order to attract investors reached increasingly untenable levels in recent weeks. The yield on Portugal's 10-year bond rose to over 8.5 percent in a bond issue on Wednesday, which managed to raise around €1 billion. Finance Minister Teixeira dos Santos said in November that the country would barely be able to service its debts if bond yields rose to 7 percent.

Additionally, two credit ratings agencies had recently downgraded Portuguese debt to just one notch above junk status, which helped to push up yields. Portugal's biggest banks had also warned this week they might no longer be able to buy government debt.

Lisbon has a total of €5 billion in sovereign bond and interest payments due on April 15. Although analysts had been confident that the Portuguese government would be able to make those payments, there were growing worries about its ability to make a further €7 billion in payments that are due in mid-June, especially given the country's political crisis.

Analysts believe a Portuguese default would threaten the existence of the whole euro zone, as banks in several European countries, including Spain and Germany, are heavily exposed to Portuguese debt. Other euro-zone countries have been urging Lisbon for months to seek EU help, in an attempt to stop the sovereign debt crisis from getting any worse. There are fears that the contagion could spread to Spain, which, as the fourth largest economy in the currency zone, could be too large to rescue.

Although Portugal's debt problems have not been as great as those of Greece or Ireland, poor growth in recent years made it vulnerable to contagion from the euro zone's debt crisis. Its budget deficit hit 9.3 percent of gross domestic product in 2009, way over the 3 percent threshold dictated under euro-zone rules. Lisbon introduced a series of austerity measures in a bid to bring the deficit down to 4.6 percent of GDP, its target for 2011. Unemployment is at a record high of 11.2 percent, and the Bank of Portugal has said it expects a double-dip recession in 2011. 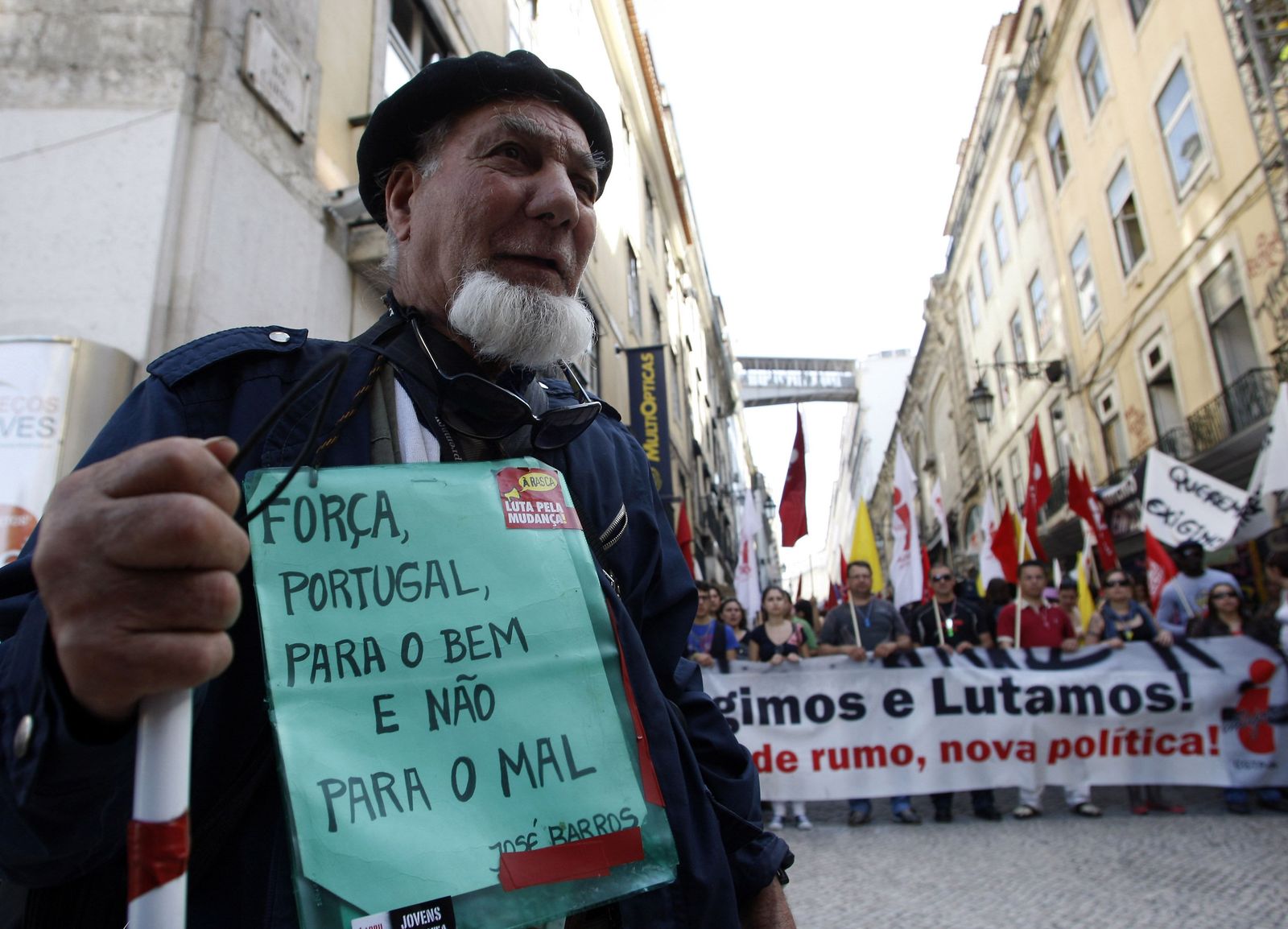 A protest against high unemployment in Lisbon on April 1. Portugal has become the third euro-zone country to ask for an EU bailout.