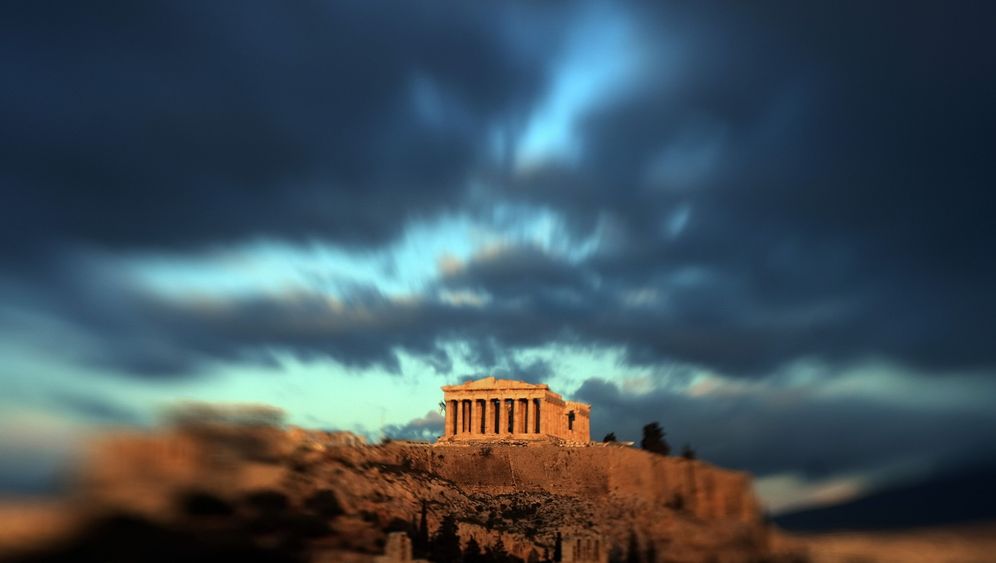 German Chancellor Angela Merkel refrained from commenting for three long days as the value of Greek bonds continued to fall. The chancellor knew she had to say something to put a halt to the nose dive. Something needed to be done to defuse the ticking time bomb threatening Europe and the euro: the possible bankruptcy of European Union member state Greece.

Speculators in the trading rooms of banks had been waiting for a signal. They wanted to know whether EU member states were going to rush to the aid of the financially hemorrhaging country on the Aegean. The longer they waited, the further Greek bonds slipped -- and the closer the country slid toward national bankruptcy.

Merkel doesn't believe that Greece can cope with its problems without help from Brussels -- regardless of whether the Stability and Growth Pact prohibits such aid or not. That's what she told close advisers in the Chancellery on a number of occasions.

Any promise of aid though would only undermine the willingness of the Greeks to take tough measures to bring their runaway deficit under control without outside help -- and that is exactly what Merkel wants to avoid.

So the chancellor attempted a balancing act: "We bear a collective responsibility," she said last Thursday shortly before a meeting of EU heads of state and government in Brussels, where Greece's financial situation was also on the agenda. When a member country has problems, it concerns all of us, Merkel said. This makes it necessary to discuss how the community can intervene in the policies of countries that have amassed large mountains of debt, she added.

It was a weak signal, but it sufficed for the time being. Prices of Greek bonds recovered slightly after they had plummeted at the beginning of the week. Last Monday, the rating agency Standard & Poor's had given Greece a negative outlook, and one day later its competitor Fitch substantially downgraded the country's creditworthiness from A- to BBB+. That is the worst rating that a country in the euro zone has received since the introduction of the common currency in 2002.

Suddenly the fear of a financial crisis reared its ugly head again -- the fear of a second wave that would not hit the banks this time, but rather the countries who could not pay their debts. First Dubai, then Greece, then what?

A wave of nervousness spread to the stock exchanges -- where prices fell -- and to the capital cities of the EU, the finance ministers' meeting in Brussels, Germany's financial center in Frankfurt and even to the headquarters of the International Monetary Fund (IMF) in Washington. Everyone was asking the same question: What happens when a country, even a member of the European monetary Union, goes bankrupt? Can the EU allow this?

In any case, the EU cannot push Greece out of the euro zone and leave the country up to its own devices, although the Greeks did cheat their way into the common currency club with the aid of fudged budget figures, as Axel Weber, president of Germany's central bank, the Bundesbank, recently made clear at a board meeting.

Does Greece Have Far Higher Debts?

The alarming nature of the situation is reflected by the fact that the IMF is taking up the issue. According to sources in the German Finance Ministry, a visit in the coming weeks by IMF officials assigned to Greece will have the character of a special audit.

The IMF has serious doubts over whether Greece's projected deficit for this year, which was revised from 6 to 12.7 percent, is in fact realistic -- or whether it is actually much higher. Government officials in Berlin and Germany's central bankers in Frankfurt share this view, and some of them even see the BBB+ rating as "almost flattering."

According to the standards applied to private individuals, Greece would already be insolvent today, despite the fact that it has continued to service all its debts. This is due to the enormous outstanding debts that government agencies and ministries have in the private sector. These claims amount to over €10 billion ($14 billion) and the Greeks owe over €2 billion to German companies alone. Taking these sums into account would cause the Greek deficit to rise even further.

"We have made provisions for most of these claims," says Greek Finance Minister Giorgos Papakonstantinou (see the accompanying interview here). He points to the efforts of the new government under Prime Minister Georgios Papandreou to reduce the deficit in the coming year and regain the confidence of the financial markets.

There is also a lack of trust in Greek promises within the EU. All too often in the past the Greeks have vowed to make improvements. In Berlin and Brussels politicians are increasingly grappling with the question of how to effectively help the Greeks.

There appears to be little doubt that the EU will take action -- after all this concerns the future of the euro, and perhaps even the future of Europe. If the EU actually allows a member state to go bankrupt, it could spark a chain reaction. Long ago Standard & Poor's put Spain on the list of countries whose credit rating is on the verge of being downgraded. Portugal, Italy and Ireland could also be drawn into the downward spiral of declining bond prices, higher interest rates, more expensive debts and thus a higher deficit. On top of that there is the ballooning budget deficit of £175 billion ($285 billion) in Great Britain -- a core country of the Continent, even if the euro is not legal tender there.

Europe might perhaps be able to afford to let a country go bankrupt, just as the US was able to cope when California went broke. But what if this happens to a number of EU countries? That would trigger what euro skeptics have warned about right from the start: The European common currency would collapse.

But the trouble wouldn't stop there. When government bonds that have been regarded as a safe investment suddenly become worthless, then the banks start to wobble again, except in this case there would be no more governments strong enough to support them.

Nonetheless, even an isolated Greek bankruptcy would be bad enough, both economically and politically. Greece is already shaken by violent demonstrations, and political unrest could not be ruled out if the country descended into financial chaos.

What should be done to head off this Greek tragedy? The members of the board of the Bundesbank have a clear opinion on this subject. They say that if the country went bankrupt, Europe should under no circumstances come to its aid. Otherwise the Stability and Growth Pact would become nothing more than a historic document, with no relevance for the present or even the future. If help is required from other countries or international institutions, then the IMF should step in, say the bankers. After all, one of the key missions of the fund is to provide this type of aid.

Many heads of state and government, including Merkel, would like to keep the IMF from getting involved anywhere in the euro zone. This is primarily because they feel that the Europeans must solve their currency problems alone. Outside help would only undermine confidence in the euro. The chancellor instead advocates establishing an instrument on a European level that would resemble what the IMF already has in place. In other words, money would only flow in exchange for tough and wide-ranging preconditions. This would significantly limit a country's sovereignty.

The Greeks, for example, might have to accept a budget inspector -- or be forced to raise their taxes so that a predetermined sum of money can be raised through additional revenues.

Up to Its Ears in Debt

But no one knows if this would be sufficient, or if even these measures would come too late. Greece is up to its ears in debt -- not only to its bondholders, but first and foremost to foreign companies.

One of these is the ThyssenKrupp subsidiary HDW, which specializes in building submarines. On April 22, 2004 Evangelia Vassiliki, a descendent of freedom fighter Dimitrios Papanikolis, launched a high-tech vessel with fuel cell drive technology named after the naval hero who fought the Turks in the Greek War of Independence. Ever since then the sub has remained moored in the port of the German city of Kiel. The Greeks never paid for it.

The Greek state owes HDW over €550 million ($806 million). These outstanding accounts also concern three additional submarines of the same type built in Greece. The government in Athens refuses to certify the vessel in Kiel, and since they lack official permits, the three subs anchored in Athens cannot even be taken out on test runs.

At the German Ministry of Economics, officials who are monitoring the situation say that the Greeks' delaying tactics are designed to doctor the numbers. In March 2006, the EU introduced more detailed accounting rules. According to the new regulations, expenditures for military equipment only become budget entries when the deliveries have been technically certified.

As long as the Greeks refuse to issue certifications, they can keep practically the entire volume of orders out of their official deficit statistics. This concerns not only the outstanding amount of €550 million, but also the sum of €1.5 billion, which has already been financed and disbursed.

German defense contractor Krauss-Maffei Wegmann is also still owed just over €300 million on an order of 170 Leopard tanks. All of the military hardware has been delivered, but a few dozen tanks are still waiting for technical certification.

It's a similar story with the Eurocopter. The Greeks have ordered 20 NH90 helicopters from the German subsidiary of the European aerospace and defense giant EADS, but not paid for them all. The company says negotiations are continuing. The Americans have had similar problems with Hercules aircraft and Apache helicopters.

'At the Mercy of the Greeks'

But it's not just in the defense sector that companies have trouble getting the Greeks to pay their bills. In the health sector Greece's outstanding payments are enormous. A few weeks ago, the European umbrella organization for the pharmaceutical industry informed its members of the appalling backlog of payments from Greek government agencies. The organization said that in late 2008 Greece owed €2.7 billion just for drugs and medications.

"We are completely at the mercy of the Greeks," says a Berlin pharmaceutical lobbyist, "because the deliveries cannot simply be canceled. People's lives depend on them. It's not like with cars where you can say: If you don't pay we just won't deliver."

The situation is very similar when it comes to medical instruments, an area where Greek government agencies owe European manufacturers €5.2 billion. And the numbers keep growing. In 2008, in the pharmaceutical industry, the amount of money owed was 40 percent larger than the previous year.

Meanwhile, the EU has discovered that it takes an average of 165 days for the Greek government to pay its bills -- and that number is rising, too. Barbara Weiler, a Social Democrat (SPD) in the European Parliament, is very concerned about this development. She is the rapporteur to the European Parliament on guidelines for combating late payments in commercial transactions. "The Greeks are in this respect the worst," she says.

The German government is aware of the outstanding payments. "It's simply not right that our companies are operating with government subsidized programs to reduce working hours because the Greek government has not paid for products that were delivered long ago," complains a high-ranking official in the Economics Ministry.

In view of this burden to the German economy, ministerial officials all agree that if Greece is to receive aid payments, prior guarantees must be obtained that the Greeks will pay off their debts to German companies.