A new idea to solve the euro crisis has suddenly become popular among Germany's political parties. People from all sides of the political spectrum are falling over themselves to call for a new European convention in a bid to fix the crisis that is putting the whole future of the European Union at risk.

According to the proposal, the convention -- which would be composed of representatives of national parliaments and governments, the European Parliament and the European Commission -- would revise the current European treaties as quickly as possible. There is a widespread belief in Germany that the euro crisis, which has long since become a crisis of the European Union, cannot be solved in the long term without fundamental changes to the treaties.

Chancellor Angela Merkel has said as much. When Merkel, together with French President Nicolas Sarkozy, recently announced they had come up with a comprehensive package of measures to solve the crisis, the chancellor said it would include "changes to the treaties." A draft position paper on European policy for the party congress of Merkel's conservative Christian Democrats in November says that such changes are "in the interest of a Europe that is capable of taking action, transparent and democratic."

"There is no way around it," wrote Foreign Minister Guido Westerwelle, the former leader of the business-friendly Free Democratic Party (FDP), in a guest editorial for the Berlin newspaper Tagesspiegel. "A change to the treaties is necessary for there to be an effective change in the stability rules," he added, referring to the euro-zone debt and deficit rules laid down in the Maastricht Treaty.

The Greens are of the same opinion. Like the CDU, the Greens are also devoting a motion to Europe at their national congress in a few weeks' time. They want to open a "new chapter" and make it clear "why we need more, not less, Europe."

"We need a new treaty between Brussels and its citizens in order to discuss the necessary far-reaching reforms and get the process in motion," says Green Party co-leader Cem Özdemir. Germany's Martin Schulz, head of the Social Democrats' group in the European Parliament, took a similar position in remarks to the public radio station Deutschlandfunk: "We need to change the treaties," he said.

The Race for Europe

It seems that the race toward a new Europe has begun -- and the Germans want to be at the front of the pack. The only problem is that the whole of the EU has to share the same goal. And some European leaders have little desire to follow Merkel's lead.

British Prime Minister David Cameron, for instance, recently made it clear that amendments to the treaty would not be on the agenda. And if at some point in the distant future such changes were considered, then they would involve rolling back Brussels' power instead of giving it more competencies, he said.

Austrian Foreign Minister Michael Spindelegger said he cannot accept a situation where Germany and France come to an agreement and everyone else is expected to follow in their footsteps. Changing the treaties would "not help now," he said.

Even Ireland's Prime Minister Enda Kenny rejects the idea. Europe should continue with what it has, Kenny said recently.

In Ireland, memories of the tedious negotiations that led to the Lisbon Treaty are still fresh. That process too began in early 2002 with a European convention that submitted a proposal for a European constitution a few months later. That proposal was signed by the European heads of state and government, but was rejected in referenda in France and the Netherlands. The Lisbon Treaty subsequently replaced the failed constitution. Its ratification was also delayed. Two referendums had to be held in Ireland before it was approved. It wasn't until Dec. 1, 2009 that the treaty entered into force, almost eight years after the convention first met.

Bearing that in mind, the goals of the CDU and FDP seem very ambitious. CDU General Secretary Hermann Gröhe and Foreign Minister Westerwelle think they can present revision proposals that are ready to be agreed upon within a year. But what will these revisions look like, and how can the EU be made more resistant to similar crises in the future? "A lot is conceivable," Westerwelle says. "Suggestions are on the table."

So far, the most concrete plans have been put forward by the CDU, and Westerwelle has adopted a few of their ideas for himself. The CDU's proposal suggests the following, among other things:

The Greens' proposal is somewhat more general. They are calling for a fiscal and economic union, less "backroom diplomacy" and policies more in line with citizens' desires. To reach such goals, the party proposes a number of measures, including:

Resistance within the Coalition

There is clearly no lack of nice ideas. But resistance to them isn't just limited to the European level outside Germany. Not everyone in the ranks of Germany's ruling coalition is keen on the idea of rapidly amending the EU treaties. The CDU's Bavarian sister party, the Christian Social Union (CSU), bristles at calls for "more Europe," and members of the FDP are about to hold a vote on the party's future course at the urging of the euroskeptics in its ranks.

Indeed, Özdemir, the Green Party's co-chairman, believes it's far from certain whether the ruling coalition would be united in supporting the proposed European convention. "Europe's future course cannot hinge upon a Bavarian regional party and a crisis-ridden FDP," he warns.

At the moment, only one thing is clear: If Merkel is really serious about backing a fundamental reform of the EU, she has a lot of convincing to do. Already last October, at a speech she gave at a meeting of the Federation of German Wholesale, Foreign Trade and Services (BGA), Merkel stressed that treaty amendments were of "immense importance" to her and that they should take place by 2013. Given the protracted period of time it takes to get changes through the ratification stage, she noted that the process would have to begin soon, adding that she and French President Sarkozy saw eye-to-eye on this issue.

And when did Merkel feel that the proposed amendments should be submitted? By March 2011. 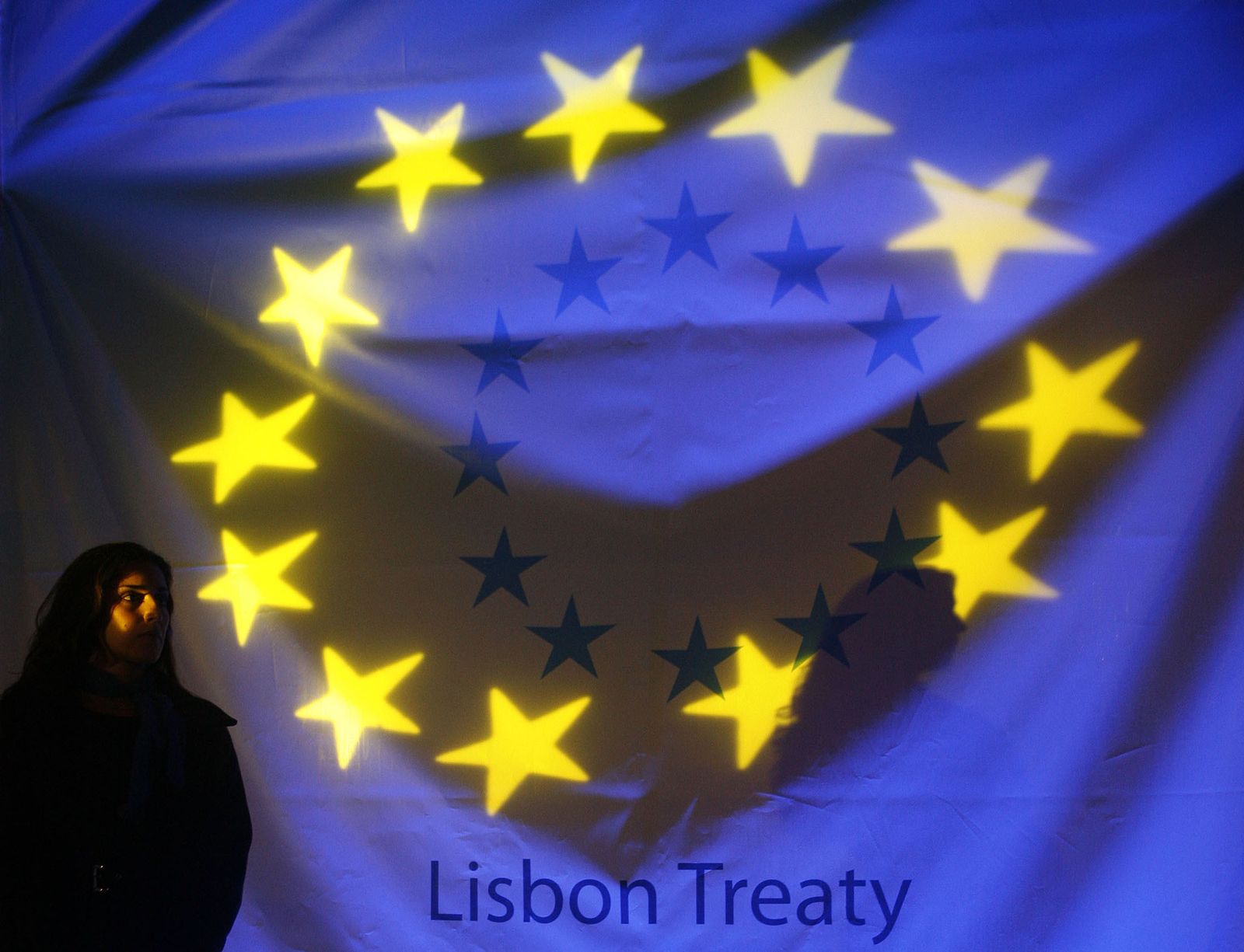 An EU flag is seen at a ceremony to mark the launch of the Lisbon Treaty in December 2009.