The Severn is Great Britain's longest river -- and it's oddest. When the spring tide comes, it briefly transforms the 350-kilometer-long river into a surfer's paradise when violent flood waves come crashing into the river's narrow mouth from the Atlantic.

Two years ago, a 41-year-old Englishman set the unofficial world record for long-distance surfing after riding a wave up the Severn River for an hour and 16 minutes, the BBC reported. After pulling himself up on his board, he managed to surf a stretch of more than 12 kilometers of along the river.

But anyone wanting to attempt to break that record had better hurry -- because time is running out for surfing the so-called Severn Bore. The British government is currently mulling a plan that would bring an end to an era of surfing on the river by tapping the tide to produce electricity. With the planned Severn Barrage, the country hopes to build one of the world's most ambitious tidal power plants.

Like the river's waves, it is a project of gigantic proportions. The 16-kilometer (7.4 mile) barrier, spanning the inlet between southern England and South Wales, would be the world's largest. Its turbines would have the capacity to deliver an extraordinary amount of green-powered energy. At 8.6 gigawatts, its energy output would be roughly equivalent to eight nuclear power plants. It would have the capacity to provide fully five percent of Britain's current electricity needs -- sustainably and without any climate-harming carbon dioxide emissions.

The mouth of the Severn is perfectly suited for the mega power station. The secret lies in the river's enormous tidal range of up to 15 meters. Twice each day an enormous amount of water surges into the Severn estuary. The only other place on the planet where such a huge difference between high and low tide exists is at the Bay of Fundy in Canada. In the future the water will be dammed, and with the ebb of th tide, up to 216 giant turbines -- each nine meters in diameter -- will power up.

The plan is in no way new. The Nazis also wanted to build a similar barrage if they succeeded in toppling Winston Churchill during World War II. In recent decades, the British government toyed with the idea from time to time, but plans were always shelved because the monstrous undertaking was deemed too expensive.

With record high energy prices and debate over climate change, though, the Severn Barrage Project has newfound currency. Neither the £15 billion (€19 billion, $29 billion) price tag nor the eight-year construction period are deterrents. Nor is the scorn of critics, who are fond of deriding it as a British rip-off of the gigantic Three Gorges Dam in China.

British Prime Minister Gordon Brown, of the left-leaning Labour Party, is a declared friend of the Severn Barrage proposal, as are his environmental and economic advisors. Even David Cameron, leader of the opposition Conservatives, loves to talk about tide power's great potential. A multi-million pound feasibility study is already underway and a decision will be made on whether the second phase of research can commence is expected this autumn.

But few technical problems are expected to stand in the way. In France's Bretagne region, the La Rance tidal power station has operated since 1966 without any problems. It is considerably smaller, but the design is comparable. 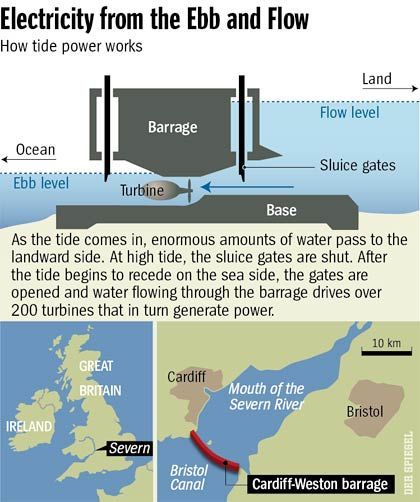 Graphic: Electricity from the ebb and flow

Still, at least 10 environmental organizations have spoken out against the project. It would threaten a number of species and their habitats, they argue. A lock of around seven meters on the inner side of the structure between Cardiff and Weston would reduce the tidal range. Large areas, which are sometimes dry and at others flooded, would be permanently immersed in water. Tens of thousands of shorebirds would be rendered homeless, and many fish would be unable to clear the barrier on their way to their spawning grounds. Critics also maintain, the money would be better spent following the German model of investment in wind and solar power -- both areas where Britain has a lot of catching up to do.

Britain faces a difficult choice at Severn. It has an opportunity to generate vast quantities of dependable, CO2-free green energy. But that could come at the expense of one of Europe's unique tidal mudflats-- a spawning ground for salmon, sea trout and eels and an important rest stop for migratory birds.

Until he left the environmental organization WWF two years ago, Andrew Lee fought vociferously against the project. But he has since formed a new opinion in his role as an environmental advisor to Prime Minister Brown as the director of the Sustainable Development Commission.

"The era of easy choices about energy is long over," Lee recently wrote in a letter to Britain's Guardian newspaper.

Under the European Union's habitats directive, Britain would be required to create compensatory habitats for the fish and birds displaced by the project, even if it comes with a steep price tag. But Lee argues it is equally urgent that Britain "decarbonize" its electricity supply.

"Whatever decision is finally made," Lee wrote, "the eyes of the world will be upon us."