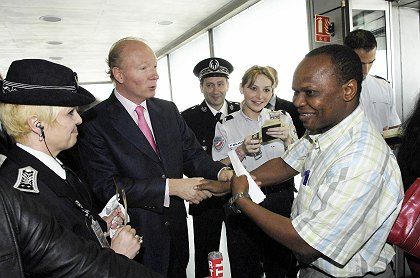 France is home to over 5 million immigrants -- and the new conservative-led government doesn't plan on making things any more comfortable for them. While the new regime in Paris is determined to curb illegal immigration, it is also looking to encourage legal migrants to reconsider their decision to stay in France -- by paying them to go back home.

New immigration minister, Brice Hortefeux, confirmed on Wednesday that the government is planning to offer incentives to more immigrants to return home voluntarily. "We must increase this measure to help voluntary return. I am very clearly committed to doing that," Hortefeux said in an interview with RFI radio.

Hortefeux, who heads up the new "super-ministery" of immigration, integration, national identity and co-development, said he wants to pursue a "firm but humane" immigration policy.

The new ministry was a central pledge in Nicolas Sarkozy's election campaign, who had warned that France was exasperated by "uncontrolled immigration." He was accused by the left of playing on public fears of immigration during his campaign, in an attempt to appeal to the supporters of the far-right National Front. In the end, Sarkozy won comfortably with 53 percent, and Hortefeux says this shows that the French people have clearly decided on what immigration policy they want. He also pointed to an opinon poll in the Le Figaro newspaper, which found that three in four people in France approved of the ministry.

Since he was appointed by the new president last Friday, Hortefeux has insisted that "co-development" will be an important plank of French immigration policy. He argued that the system of voluntary return can be seen as a means for investment in developing countries. He said that the method of transferring funds via returning immigrants to their country of origin was a better policy than providing aid for development.

Hortefeux is also talking tough when it comes to dealing with illegal immigration, insisting that there are no plans for a mass legalization of the estimated 200,000 to 400,000 illegals in France.

The new minister voiced concern that the majority of legal immigration into France was that of existing immigrants bringing in relatives, while only a small proportion were granted visas due to their professional skills.

"To be integrated, you need language skills and a professional activity," he told RFI, and said he is considering introducing a language test to prospective immigrants.

France is home to an estimated 1.5 million immigrants from mostly Muslim North Africa and 500,000 from sub-Saharan Africa, according to the 2004 census.

Asked on RFI about how the notion "national identity," fits into the new ministry -- the term has been fiercely criticized by the French left -- Hortefeux said: "This should not be understood as something menacing, but on the contrary, it is initiative with the aim of bringing coherence."