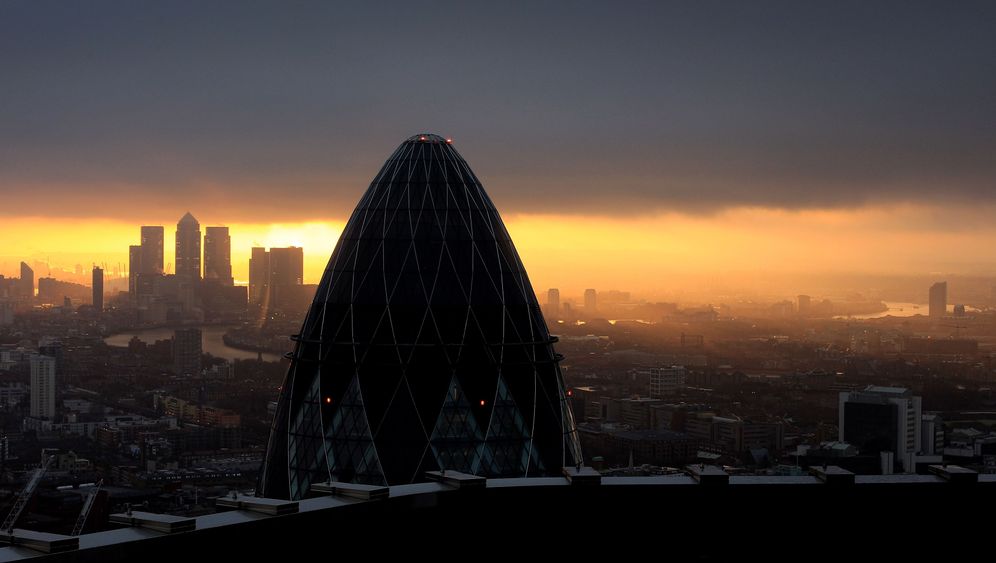 For the darkest hours in the fight against Adolf Hitler, the British Ministry of Information -- which existed for the duration of World War II -- had set aside a special poster. Intended to bring calm to the home front, it depicted the crown of King George VI against a red background, with the words "Keep Calm and Carry On" printed beneath the image.

The situation never became sufficiently desperate to justify using the poster, and the millions of copies that had been printed were stored away unused. Ten years ago, a bookseller discovered a single copy and hung it up in his shop. That may well have been the end of the poster's career, but then the country was suddenly faced with multiple crises: terrorist attacks, a banking debacle and, finally, the economic and credit crisis.

The bright-red poster now hangs in the offices of directors and members of parliament, in soldiers' barracks and student dormitories. Entire ministries are using it to boost morale, and framed versions of the posters are even said to grace the walls of No. 10 Downing Street and Buckingham Palace.

If only keeping calm and carrying on were that easy this time around. The British pound is tottering. The economy finds itself in its worst crisis since 1931, and the country came within a hair's breadth of a deep recession. Speculators are betting against an upturn. Instability in the banking sector has had a more severe impact on government finances in Great Britain than in other industrialized countries. London's budget deficit will amount to £186 billion (€205 billion, or $280 billion) this year -- fully 12.9 percent of gross domestic product.

Nobody Knows How to Fix the Problem

The country that was once referred to as "Cool Britannia" is in a serious crisis, with a hole in its budget even bigger than Greece's budget deficit, now at 12.2 percent. And nobody knows how to fix the problem.

Indeed, the problem has become so worrisome, that the European Commission told London on Wednesday to do more to tighten its budget, according to a draft report leaked to Reuters earlier this week. "The fiscal strategy outlined in the United Kingdom's convergence program does not foresee the correction of the excessive deficit by the fiscal year 2014/2015, as recommended by the Council," the European Commission said in a statement.

To complicate matters, Britons will go to the polls in a few weeks, probably on May 6. The next prime minister will have his work cut out for him: reducing the massive budget deficit, restructuring the banking industry and successfully reorienting the economy. And he'll have to do it all on a shoestring budget.

Both candidates provide voters with reason to question their qualifications for the tasks at hand. Incumbent Gordon Brown, 59, in his former position as Chancellor of the Exchequer in the government of his predecessor, Tony Blair, boasted of having put an end to the ups and downs of the economy once and for all. But he had hardly taken the reins from Blair before the economy plunged into the cellar.

Brown was ridiculed in the press, faced revolts within his party and encountered contempt from the people. But he was persistent. He swallowed the criticism and gradually acquired a reputation as a capable crisis manager, at least during the global economic crisis. Polls in recent weeks show that while few Britons like him, more and more are willing to vote for him anyway.

Brown's strong showing is primarily attributable to his Conservative challenger David Cameron, 43, part of the arrogant upper class whose stint as a special advisor to the chancellor of the exchequer, during the 1992 crash of the British pound, is seen as his only experience in coping with economic difficulties. Furthermore, even his fellow Tories question the qualifications of George Osborne, 38, Cameron's designated chancellor of the exchequer.

Tough times are ahead for the United Kingdom, so tough, in fact, that none of the parties has dared to say out loud what many in their ranks already know. At a minimum, Britons can look forward to higher taxes and fees. "We will have to make a lot of sacrifices," says economist Carl Emmerson of the independent Institute for Fiscal Studies in London. "The cuts," he says, "will be more drastic than those under (former Prime Minister) Margaret Thatcher."

Tougher than Thatcher. Such words still trigger a flight instinct today -- away from the Conservatives. In the 1980s, barricades were set on fire and police clashed with protestors in the streets. It was a time many Britons haven't forgotten.

The Iron Lady may have advocated austerity measures, but real government expenditures continued to grow from year to year under her aegis, with only one exception: 1988. Because of the budget deficit the next government, no matter who leads it, will have no choice but to sharply cut government spending.

The accountants at PricewaterhouseCoopers have calculated that starting next year, Britain would have to make across-the-board budget cuts of 5 percent a year to come close to cutting the deficit in half by 2014. But because the Brown government has already declared the budgets for health, law enforcement and schools to be off-limits, cuts of up to 10 percent -- per year -- are to be expected in most areas, according to PricewaterhouseCoopers. And things could even turn out to be much worse if there is no strong economic upturn during this period.

It Will Be Brutal

There is still disagreement over when the austerity measures would have to begin. Many Tories want them to take effect immediately, a view 20 leading economists advocated in a much-noticed letter in the Sunday Times.

A few days later, Labour supporters responded with two letters of their own, printed in the Financial Times and signed by more than 60 prominent economists, including two Nobel laureates. They warned that if harsh austerity measures were imposed now, they would inevitably reverse the frail economic recovery and trigger another recession.

No matter when this era of cutbacks begins, it will be brutal. More than 100,000 jobs in local governments are at acute risk, says Tony Travers of the London School of Economics. Some communities are already reducing personnel, and playing fields, libraries and social workers are threatened.

There will also be massive cuts in low-income housing construction and transportation, translating into even more dilapidated housing, more potholes on Britain's already miserable roads, and new cutbacks in high-speed train service. Universities have already lost close to £1 billion in funding, and various think thanks predict that the defense budget could shrink by about 15 percent between now and 2015.

The Independent called such numbers games "unthinkable" or even "unintelligible." Others say they are unavoidable.

Paying for the Banks' Debts

"The British will spend the rest of their lives paying for the debts that the banks and this government have brought upon us," says Mike Whitby, the Tory mayor of Birmingham, who has just laid off 103 people, to be followed by as many as 2,000 more city employees this year.

Birmingham is one of England's oldest industrial cities, although it has almost no industry today. In the past, companies like Dunlop, Austin, Vickers and Morris had factories in the region, but since the beginning of Tony Blair's administration, another 130,000 jobs have been lost there.

The city, which is now heavily in debt, invested in shopping centers, new buildings in its downtown area and the country's most spectacular library, a £190 million project. Birmingham decided to shift the focus of its economy to conventions and tourism, as well as to expand the service sector.

But even when the investments failed to produce new jobs, the city continued to pump money into its ambitious projects. There were piano teachers, diet assistants, debt counselors and park security guards on the city payroll. Birmingham was pursuing the same kind of public utility model that had developed throughout the country in the Labour years, a model that held up until the crisis began.

Today Mayor Whitby, an amateur boxer with a booming voice, ruefully admits that the city will have to develop new strategies, without the government. He is searching for new investors in China, India and the Gulf Emirates, and he has even had some success. There is a model car in his Victorian office, which he proudly shows off to visitors. Whitby convinced Chinese carmakers to buy up the residual assets of MG-Rover. The city's old MG plant is expected to start producing new models at the end of the year.

'Poorer Than It Thought'

Birmingham is a typical example of the British crisis. In large parts of the country, outside London, in places where the world's factory chimneys once belched smoke, the government has already become the biggest employer. The cradle of industrialization has become largely de-industrialized, refocusing its economy on banking and services. Manufacturing's share of GDP was already in decline under Thatcher, but it shrank even more quickly under Blair and Brown.

"The UK is poorer than it thought it was," writes the Financial Times. And there is nothing in sight that could provide the country with reliable support.

Brown intends to correct these mistakes after the election. He conjures up a new form of industrialization, saying that up to 1.5 million highly qualified jobs could be created in the next five years in key, future-oriented industries, like biotech, renewable energy, software and the Internet. The country needs engineers, not financial jugglers, says Brown. But the way Brown puts it, it sounds like a deathbed prayer.

But the country isn't completely without prospects. Great Britain has some of the world's top universities, and few nations are responsible for as many patent applications. Business parks and innovative high-tech firms have developed around the universities, and some are very successful.

Talented Oxford and Cambridge graduates will be working for these companies in the future and not, as in the past, for London investment banks. But while these business will undoubtedly employ larger numbers of young people, will it be 1.5 million, as Brown predicts?

Some innovative graphic designers are already a step ahead. They have taken the successful "Keep Calm and Carry On" poster from World War II and adjusted it to suit the current situation -- creating an instant hit in the process. The new poster features an upside-down crown and the words: "Now Panic and Freak Out." 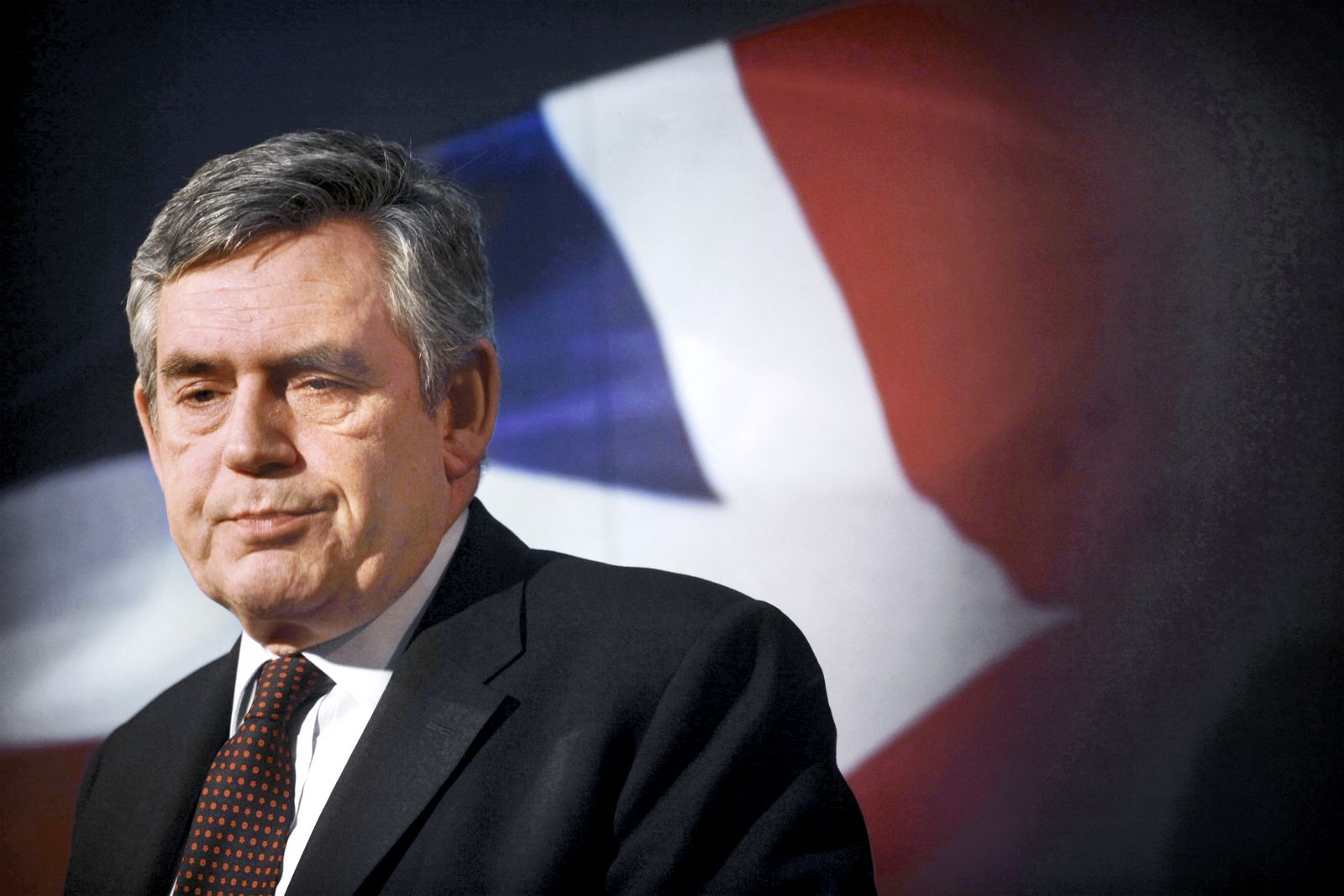 Prime Minister Gordon Brown is facing elections in May. The measures he has proposed to clean up his country's finances have been called insufficient by the European Commission.