"Inconsistent" is a word with many meanings: unstable, fickle and contradictory, to name just a few. But none of these would normally be attributed to a top-flight diplomat. The new American ambassador in Berlin, Richard Grenell, though, says that he is very inconsistent.

At a recent luncheon hosted by the United States Embassy, the ambassador expounded on his world view. He had invited a small group of journalists to the event, and as they dined on short ribs braised in red wine, the ambassador punctuated the meal with statements that he knew would make an impression.

Grenell said that his worldview is not ideologically anchored. He pointed out that he can't be put in a box or pigeonholed into the usual schools of thought. Sometimes he feels like a liberal, he said, sometimes like a conservative. For instance, he would like to be a proponent of free trade, but then he sees that others are manipulating the process. It would be stupid, he concluded, if he continued to say that it is still totally free.

Every new situation demands a new response, Grenell said, quickly adding that he's also problem solver, just like the president. Donald Trump is also ideologically inconsistent, which is why he won the election, Grenell proclaimed. "I think it's a huge advantage for Donald Trump that people can't predict him." He paused to allow everyone to take in this statement.

A New Brand of Diplomacy

Grenell has brought a new type of diplomacy to the American Embassy. It presents itself as modern and colorful. Grenell gives thought, for instance, to how the art in the embassy could be displayed differently.

When it comes to foreign policy, however, the diplomat argues with conservative rhetoric and strictly toes the line with Trump's policies on a range of issues, from climate policy to the relocation of the U.S. Embassy in Israel. The president promised during the election campaign that he would move the U.S. Embassy to Jerusalem, Grenell said. "Unlike many U.S. presidents before him, he kept that promise." Recognition of Jerusalem is a recognition of reality, he added. He made no mention of the dead, but said: "The Trump administration is firmly committed to pursuing a lasting and comprehensive peace between Israel and the Palestinians that promises a brighter future for both."

Grenell says that he opposes greater regulation of Facebook and Google in Europe, and that he admires the German car industry, even if it has messed up with some things in the past. He drives a BMW.

Grenell is very well connected at the White House. John Bolton, the national security adviser, is his mentor and closest ally in Washington.

Bolton recently made headlines with his sharp comments about Iran. On the issue of North Korea, he said that denuclearization must follow the "Libya model." North Korean dictator Kim Jong Un reacted by casting doubt on the planned summit with Donald Trump. These days, it's the hawks who are calling the shots on White House foreign policy. Richard Grenell is also a hawk, albeit a flamboyant one.

Three days before the luncheon, Grenell landed in Berlin with his partner Matt Lashey, who develops health apps, their Blue Lacy dog Lola, and seven suitcases and bags, one emblazoned with his initials, R.G.

It took eight months for the Senate to confirm Grenell's nomination. The long delay has to do with the Democrats' helpless blockade of Trump nominees, but it is also a reflection of the new ambassador's dauntless personality. He once tweeted about Hillary Clinton that she looks increasingly like Madeleine Albright. He apologized for that.

It's possible to keep tabs on the new ambassador on Instagram, where he shares his life with anyone who's interested. Aside from the many cheerful selfies with friends, on his feed you can see images of his house in Palm Springs, California, that he and his partner designed and decorated themselves, including a photo on the wall of a drag queen by celebrity photographer Magnus Hastings. You also learn that their dog Lola had to have three tumors removed. You accompany Grenell to a Britney Spears concert. You see him wearing a turkey hat embellished with drumsticks to mark a turkey trot, a Thanksgiving benefit run. He's open to taking part in all kinds of events, and he's smiling and laughing in many of these pictures.

The American diplomatic presence in Berlin is about to be imbued with a new atmosphere. Grenell has not come to mend the fences in Germany and Europe that have been damaged by the tweets and statements coming out of Washington. But he can explain why it happened.

Grenell is unmistakable, just like his president. He even tweets more than Trump. He's more partial to provocation than compromise. At the same time, he seeks constructive debates and expects them from others. Write about what connects us, and not just about what separates us, he advises the journalists. It's time to finally listen to the silent majority in your country and not just those who yell the loudest, he admonishes them. He believes that conservative politicians like Jens Spahn, an up-and-coming potential rival to Chancellor Merkel, and Free Democratic Party head Christian Lindner in Germany have understood this, but also young Austrian Chancellor Sebastian Kurz. He says that he wants to be an "eager listener," but that he is also someone who "speaks bluntly."

He spoke to the Germans quite bluntly with a tweet on his very first day in office: "German companies doing business in Iran should wind down operations immediately." That same day, Trump announced that he intended to withdraw from the nuclear agreement with Iran.

The tweet was not well-received. It ran counter to the rules of diplomacy, which state that you don't issue orders to your host country. Grenell says that he has no intention of giving commands to the Germans. And yet he consciously added this sentence: It's not just a threat, but can also be understood as an offer.

He mentions the example of Chinese who, in accordance with Trump's express wishes, have decided to back sanctions against North Korea. In return, Trump promised they would get a better deal with the U.S. Grenell reminds his listeners that the European Union is currently negotiating with the U.S. over import tariffs on steel and aluminum. He notes that Trump will put together a package based on a variety of political decisions and not view them in isolation. In other words, the tweet should also be viewed as an enticement.

Allies on the Same Side?

It is astonishing how differently the current world situation is viewed inside and outside the embassy walls. Although newspapers have been writing about the end of the Western alliance following the termination of the Iran deal, the American ambassador is unable to discern any deep rift between Europe and the U.S. In fact, he says that he views the Iran issue as proof that the allies are all on the same side. He advises a careful reading of the declaration that Germany, France and Britain made on Iran -- a document that, in his view, shows that the Europeans share the Americans' fears that Iran could acquire nuclear weapons.

Grenell sees himself as a free thinker, but in reality he's also part of the political class. After he studied in Missouri and later acquired his master's degree at the Harvard Kennedy School, he worked as a spokesman for a number of Republicans, including then-Governor of New York, George Pataki, the former mayor of San Diego, Susan Golding and several members of Congress.

In 2000, he helped with the election campaign of Republican presidential candidate John McCain, who ended up losing the nomination to George W. Bush. Even today, he refers to McCain as his mentor, although everyone knows that the senator from Arizona sees Trump as a menace to democracy. "That's how dictators get started," McCain said after Trump branded the media as "the enemy of the American people." As far as Grenell is concerned, it's McCain's independence that is decisive. He points out that the senator doesn't care what Republicans or Democrats think about a given issue. McCain makes up his own mind about things every time, says Grenell, and the ambassador admires him for it -- and says that's the way he thinks, too.

From 2001 to 2008, Grenell was the longest-serving U.S. spokesman at the United Nations in New York. Even at the time, relations with the Germans were tense: German Chancellor Gerhard Schröder had rejected providing any support for the war in Iraq, and George W. Bush's torture and rendition programs after 9/11 made him roughly as popular among the Germans as Donald Trump is today with his tweets.

The new ambassador nevertheless sees an affinity between the two countries: "You only have to spend one day at the United Nations to feel that Germany and the U.S. are on the same side. We're friends, even if we have differences of opinion. We believe in the same values: democracy, human rights, the rule of law and capitalism."

After his tenure at the UN, Grenell established his own company called Capitol Media Partners. The firm advises governments, companies and celebrities with foreign policy interests. Grenell has worked with stars like George Clooney and Ryan Gosling. He says he loves the media world and would like to work closely with journalists in Berlin to broaden their view of America.

Grenell may be a foreign policy hardliner, but he also has a soft side. His voice occasionally breaks, for instance, when he speaks of John McCain, who was unable to vote in favor of his nomination because he is battling a rare form of brain cancer. Grenell also gets emotional when he talks about his own cancer, which he managed to overcome with chemotherapy. He can also get choked up when he talks about the large bible that he placed his hand on when he was sworn into office: It was printed in 1892 and belonged to his great-great-grandfather. Grenell is a devout Christian; he and his partner pray at home every day.

He can also get worked up when he talks about moments when his homosexuality has been used against him politically.

It was six years ago, in August 2012. Grenell, 45 at the time, was standing in the Honey Pot, a bar in Tampa, Florida. A Republican gay initiative was throwing a party at the venue.

The Republican Party convention had just nominated Mitt Romney, a Mormon, as its candidate for president, and Grenell was the foreign policy spokesman on the candidate's team. But he threw in the towel just three weeks later, after evangelical groups in the party had raised a stink about his sexual orientation. The election campaign team advised him to refrain from commenting on how he was being hounded. "At some point in time it was no longer about my foreign policy skills, but only about me being gay," Grenell said in the bar at the time. He was deeply hurt by this.

Donald Trump, on the other hand, who recently banned transsexuals from serving in the military, apparently had no problem with his new ambassador's homosexuality. He made Grenell the highest-ranking openly gay official in his administration. That's something that not everyone was expecting from Trump, Grenell says, adding that it's all part of the ideological inconsistency -- the unpredictability. 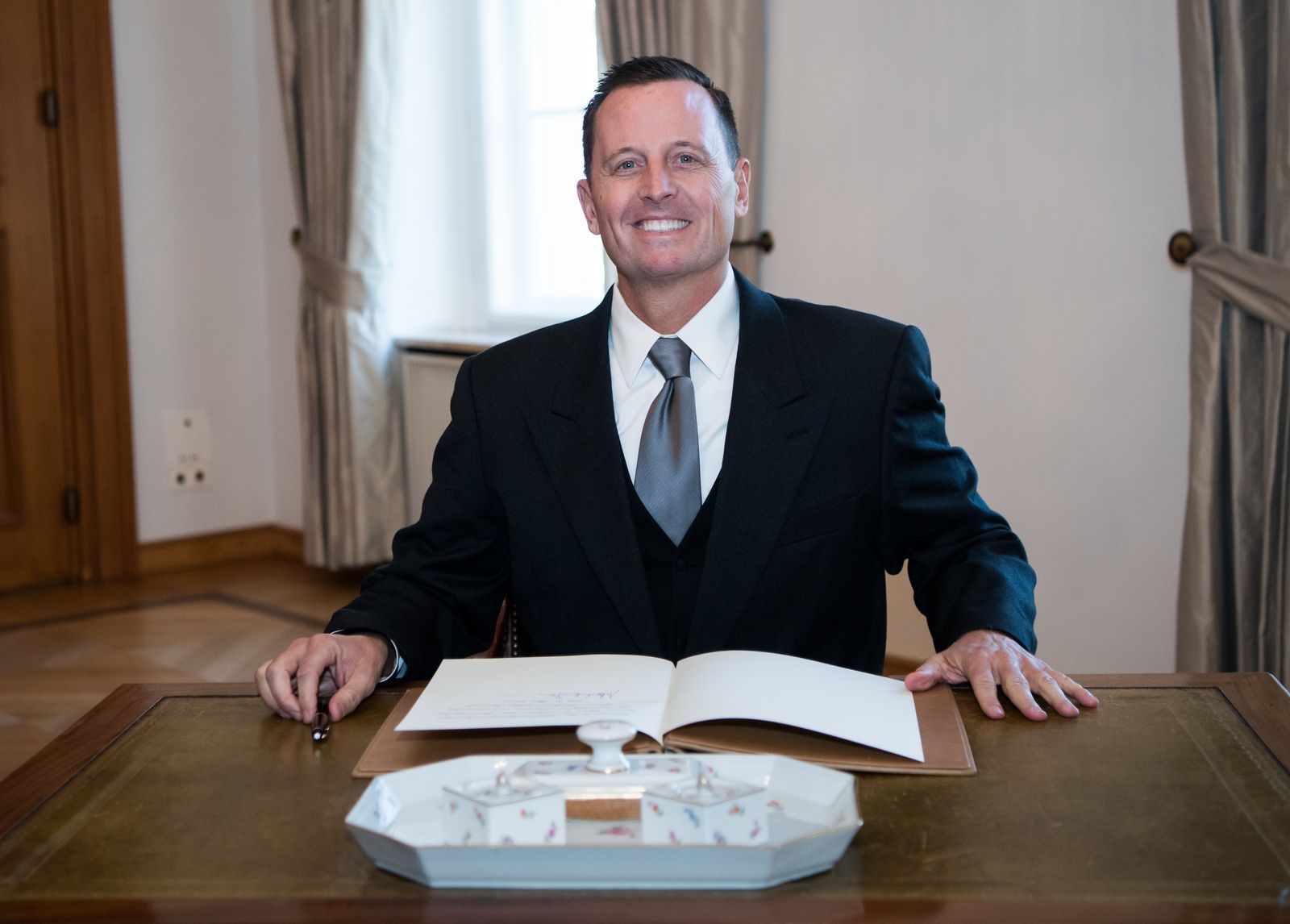