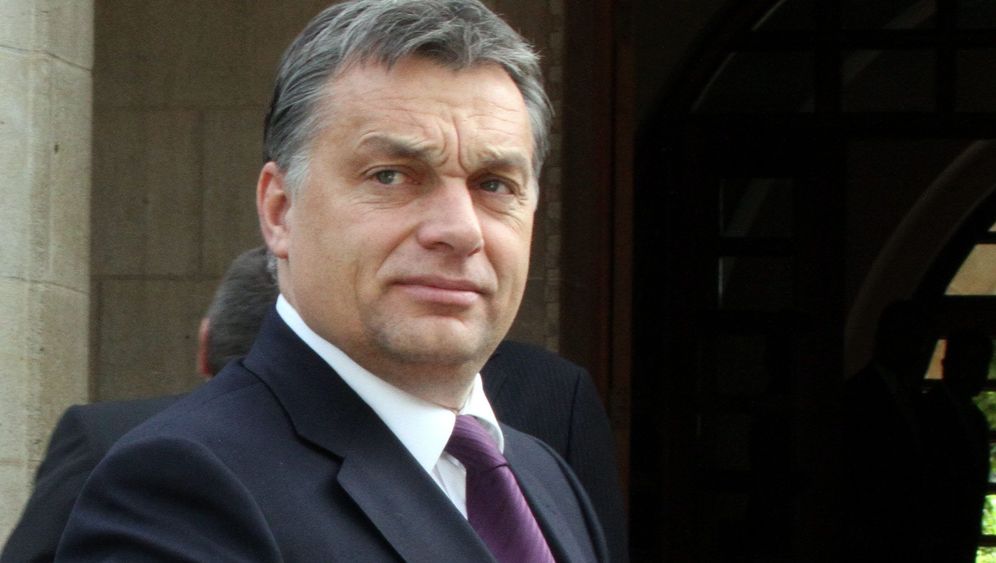 Attila Mong now has virtually every morning off. Shortly before 9 a.m. he can be found sitting between the gold-framed mirrors of the cafe in the venerable Hotel Astoria in Budapest, waiting for his tea to arrive. The morning show is playing on the radio.

The program is called "180 minutes". Attila Mong served as its presenter up to now, but the award-winning journalist has been forbidden from broadcasting because on December 21 he held a minute's silence on live radio in protest against Hungary's new media law.

The 175-page strong, repressive law came into force on January 1. This Wednesday, a hearing will be held to decide the fate of Mong and his boss, Zsolt Bogar, who has also been suspended. Although the two men have been relieved of their duties until further notice, they are required to remain within reach. They may not travel more than a two-hour drive away from the state broadcasting building.

"A Facebook group has been set up, and people plan to hold a candlelight vigil outside the radio station," Mong says. Even so, he denies he is a martyr sacrificed on the altar of Hungarian press freedom. "I wrote to my supporters telling them I am still alive and therefore don't need candles on my grave. I said they would do better demonstrating against the media law," he says.

The new law runs to 228 paragraphs covering the powers of the watchdog -- the National Media and Communications Authority -- which will now be tasked with monitoring supposedly objectionable activities by journalists in both the public and the privately funded media. The chairman of the new watchdog, who has been appointed for no fewer than nine years, can impose hefty fines for "politically unbalanced reporting;" up to 25 million forints ($119,000) for print and online media, and up to 200 million forints ($950,000) for transgressions by radio and television stations. What's more, Hungary's journalists will be forced to reveal their sources whenever "national security" is deemed to be at risk.

Hungary took over the rotating presidency of the European Union at the start of 2011. For the next six months, Prime Minister Viktor Orbán will be the Union's de facto leader and will thus be under closer scrutiny across the EU. International condemnation of his new media law has already provided a foretaste of what he can expect.

Luxembourg Foreign Minister Jean Asselborn questioned whether a country like Hungary "deserved to lead the EU". Historian Michael Stürmer spoke of Orbán's "Führer state" in an interview with Germany's Die Welt newspaper, while Hungarian writer György Konrád drew parallels between the Nazi Party in 1933 and Orbán's center-right Fidesz Party, which has a two-thirds majority in parliament and can thus change the constitution.

Forty-nine-year-old Annamaria Szalai is the woman anointed as Hungary's media czar. The former elementary school music teacher and faithful Fidesz foot-soldier now has a heavy burden on her shoulders. Perhaps that is why she has disappeared. "Maybe she's on vacation. I don't know," her press spokeswoman said. "She's ill in bed," Szalai's deputy explained. "Even I can't reach her on the phone anymore," complains József Hantos, an old friend and business partner.

Many years before she became her country's foremost authority on the media, Szalai and Hantos together published a sex magazine called Miami Press. The magazine featured racy pictures of Hungarian women. "Back then, we didn't know what would happen," Hantos says about their post-Communist experiment. So he quickly acquired appropriate "pictures from Austria, and Annamaria acted as editor-in-chief, writing the articles."

But the businessman denies they distributed pornography, insisting it was merely youthful folly. Hantos believes Szalai is the right person to protect Hungary's 10 million people not only from racism and the corruption of its youth, but also from political manipulation by an overly independent media. "She has a strong personality and is 100 percent loyal," he says.

Nevertheless, the whispering about the new chief censor persists, and this fits in with the prevailing mood. There's a strange atmosphere in Hungary now that Europe's eyes are on Budapest. The city cut in two by the Danube River is symbolic of the persistent divide in Hungary's society between the left and the right, friend and foe, each deeply suspicious of the other. Incriminations are being traded just as they were in the days of Janos Kadar's "goulash communism." Dissenting journalists are being hounded, while others are all to eager to appear patriotic.

Viktor Orbán was elected the country's prime minister in late May 2010. A liberal opposition activist in the years after the fall of communism, Orbán has since transformed into a seasoned power politician representing the state apparatus. His "conservative revolution," which he claims is "the will of the people," is being forged on the ruins left behind by years of mismanagement by the heirs of the former Socialist Party.

'Even the Old System Was Corrupt'

"If the Socialists are reelected rather than Orbán, they will continue where they left off, and nothing would be any better," says liberal lawyer Laszlo Majtenyi, who headed the radio and TV watchdog until just over a year ago. He resigned from his post when it became obvious that the then governing Socialists were scheming with Orbán's followers.

Majtenyi says it would therefore be wrong to blame all Hungary's ills on the current government. "Even the old system was corrupt. Now it's just worse in a different way. The new media law is a full-frontal attack on our basic right of press freedom," he says.

German-language online daily newspaper Pester Lloyd says the fact that Hungary's EU partners are only now expressing shock proves that they were not paying sufficient attention before. "Nothing about the developments in Hungary is truly surprising," it wrote in an editorial.

Unchallenged by his Christian Democrat brethren in the European People's Party, by German Chancellor Angela Merkel, by European Commission President José Manuel Barroso and by European Council President Herman Van Rompuy, Orbán has been free to plow through Hungary's political landscape. With complete impunity he has curtailed the powers of the constitutional court, called the independence of the central bank into question, and appointed loyal followers to top scientific and cultural positions as well as the state prosecutor's office.

Hungary's Public has Other Problems

It isn't surprising that the general public has so far paid little attention to their prime minister's thirst for power. Take a stroll between the century-old tenement buildings of Budapest's Jozsefvaros district in winter, and it's clear why. The lines of poor and homeless people in woollen hats waiting in the biting cold for soup kitchen handouts show that many Hungarians have very different worries at present. Yet there are pockets of resistance even in the heart of Jozsefvaros. Gabor Simonovits has a trimmed beard, wears glasses, and has a bottle of Fanta sticking out of his pocket. The economics student is an avowed opponent of Orbán and a member of the Facebook generation. "I don't think Orbán will take us back to the Stone Age," he says. "Nor do I think we have much to fear from the censors. However, I do believe this is a very serious situation."

Four days before Christmas, Simonovits and a dozen other people organized a demonstration in front of the parliament building in Budapest. Some had stuck band-aids over their mouths, others covering their lips with their hands. The photos were printed around the globe and helped to mask the fact that barely 1,500 of the country's 10 million people came out in protest against the new law. "We didn't even have a podium. We had to go get beer cases from a nearby bar," says Simonovits, who doesn't like to be referred to as a "political activist," preferring instead to be described as a "politically aware" Hungarian. Indeed, the country's young people want to have as little as possible to do with political parties.

The night the Hungarian parliament approved the new media law, Pal Eotvos was one of the protesters outside. For 33 years, Eotvos was an editor of Nepszabadsag, the former newspaper of the Hungarian Unity Party. He spent the last 15 years as its editor-in-chief. Eotvos says: "We journalists spearheaded the changes after the fall of communism. That's all over now. The profession is now so dejected that nothing motivates it anymore."

Hungaria's media landscape in 2011 is dominated by companies owned by Western European and often German-language firms -- from TV stations RTL and ProSiebenSat.1 to Ringier, from the Springer publishing house to the WAZ newspaper group. These media do not protest against Orbán or his media law, and their failure to do so is damning evidence of Western indifference, which veteran journalist Eotvos bemoans. He believes "the creation of a new media watchdog is a kind of original sin. It acts like tiny doses of arsenic. The result is a gradual poisoning of the system." 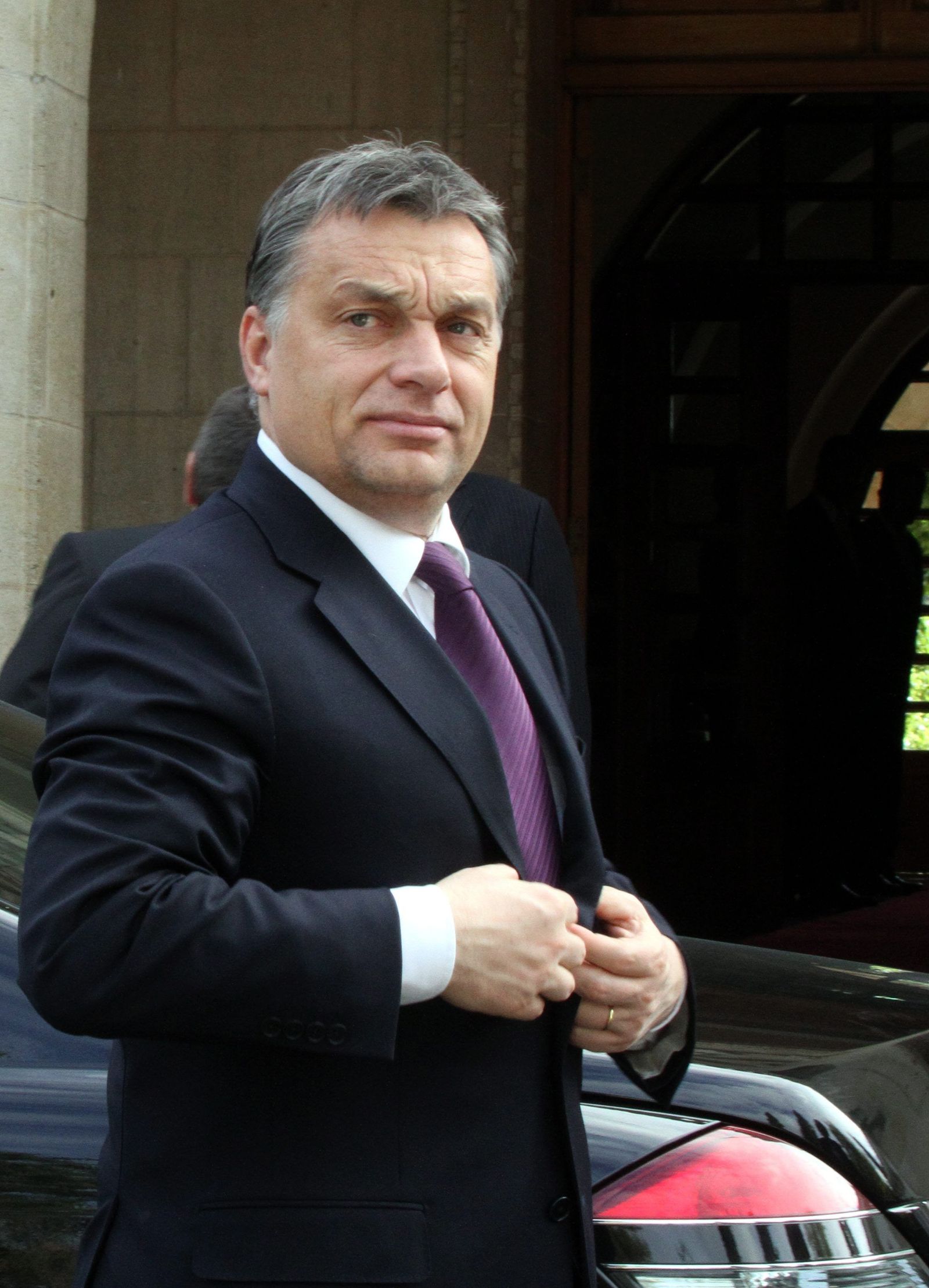 Hungarian Prime Minister Viktor Orbán has assumed the rotating presidency of the European Union. His media law has attracted international condemnation. The new law tasks the National Media and Communications Authority with monitoring allegedly objectionable activities by journalists in both the public and the privately-funded media. The chairman of the new watchdog, who has been appointed for no fewer than nine years, can impose hefty fines for "politically unbalanced reporting." 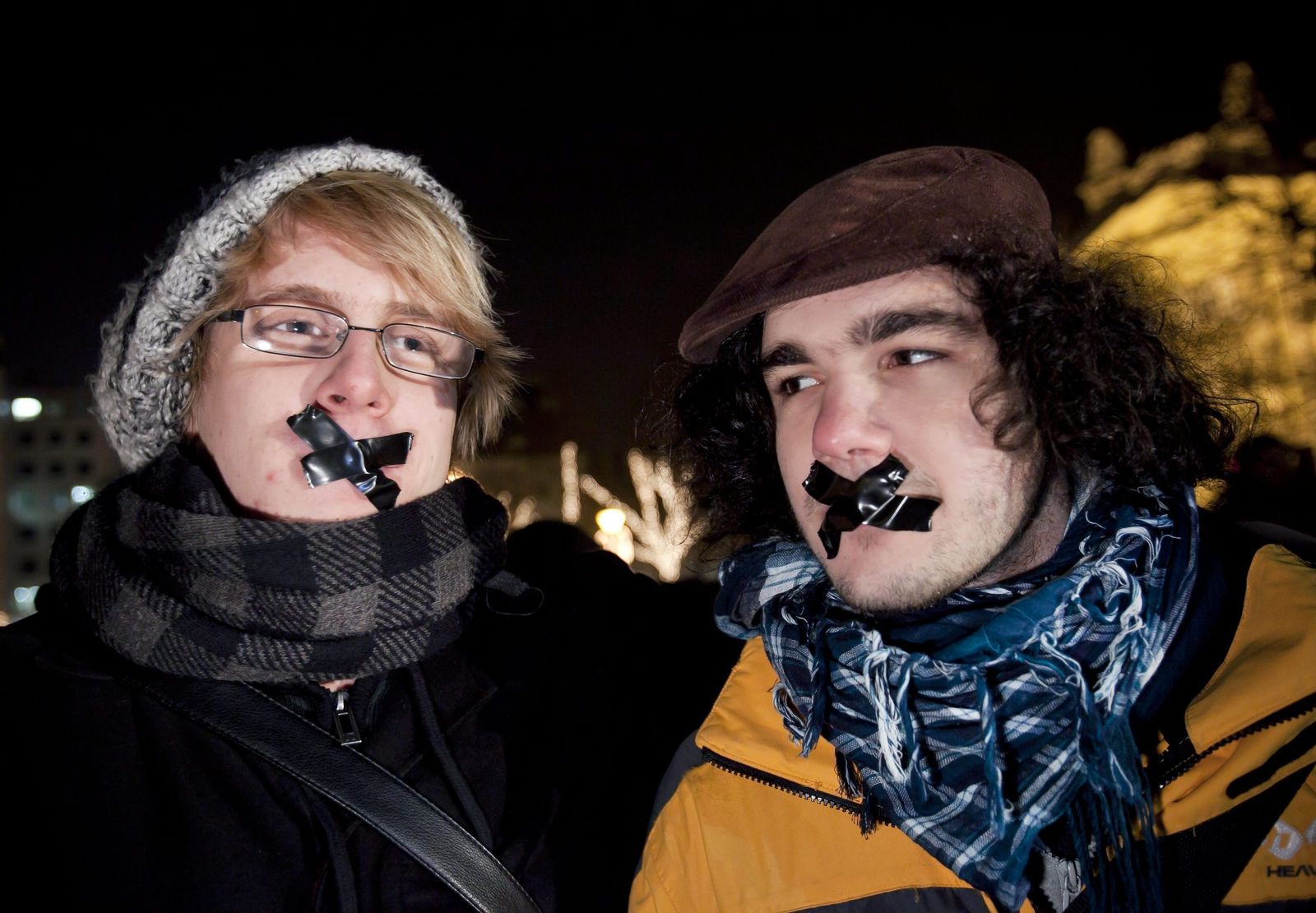 At a demonstration against the new media law on Freedom Square in Budapest, some stuck band-aids over their mouths, others covered their lips with their hands. The photos were printed around the globe and helped mask the fact that barely 1,500 of the country's 10 million people came out in protest against the new law.