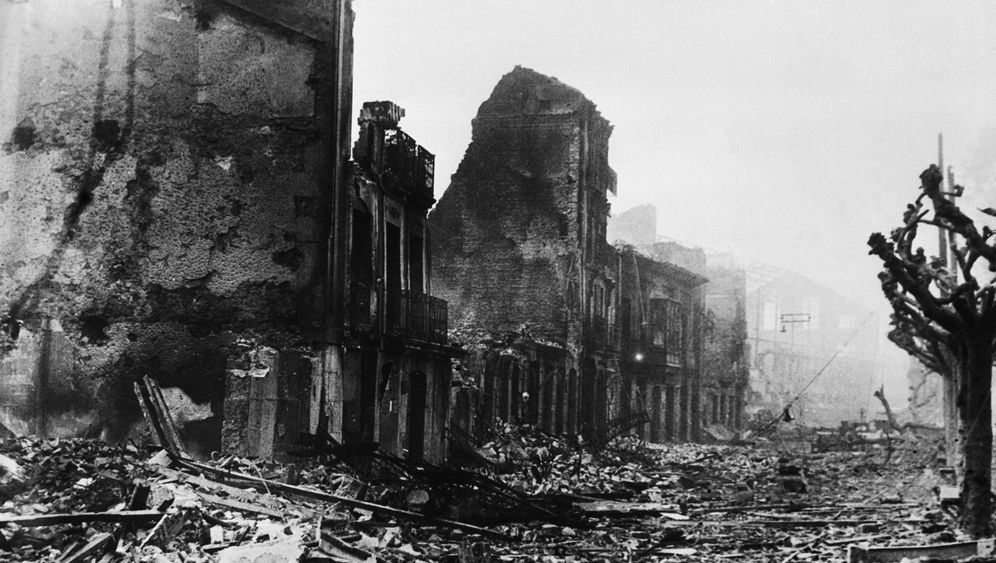 The Basque town of Guernica was bustling with activity on April 26, 1937. "It was market day, and there were finally some sweets on sale once again," says Luis Iriondo Aurtenetxea, who was 14 years old at the time. There was a cloudless sky, the 89-year-old adds, and glorious spring weather.

The diary of a German pilot who took off in his "Heinkel" bomber in Burgos at around 3 p.m. that day confirms Iriondo's recollections. "We couldn't have asked for better weather for the operation," the pilot wrote. Over the next few hours, he and 37 other pilots belonging to the "Condor Legion" would shower Guernica with thousands of bombs. They were supported by a squadron of fighter planes that flew so low "that one could make out the pilots' faces," according to reports from survivors.

At the same time, the German and Italian pilots knew very well that it was civilians they were shooting at rather than Republican soldiers. The streets of the Basque region's oldest town were not only full of its 7,000 inhabitants, but also with many women and children who had fled the surrounding villages and towns as Franco's troops advanced.

Guernica was completely unprepared for the airstrike. Iriondo claims that the only thing the town had to defend itself with was a single machine gun that wasn't even functioning properly. Today, Iriondo still has nightmares about seeing his childhood home going up in flames. Until that day, he had no concept of what war meant.

"The first time I heard about the civil war, I was lying on the beach listening to my parents talk about the putsch in Morocco," he says. But the boy didn't feel that General Franco's military putsch in the Spanish colony, which marked the beginning of the civil war, presented any immediate danger. "The only thing I was worried about was whether my Mickey Mouse book would arrive from Barcelona," he told SPIEGEL ONLINE.

'No One Took the Alarm Seriously'

The weeks before the airstrike were an exciting time for Iriondo. There was no school because most of the teachers had been summoned to the frontlines to aid the Basque-Republican brigades. Iriondo and other boys were left behind to build barricades out of sandbags. Soldiers who came through town brought pieces of news that made their lives sound exciting. Indeed, he says that he felt like these days were "just one big party."

No one had any idea what that day held in store for them. Granted, forces loyal to Franco had already captured San Sebastian and Navarra, and there had been several sightings of airplanes in the days prior. Reports were also circulating about bombing attacks on the villages of Elorrio and Otxandio, and about how a bomb had destroyed a church in Durango and killed 200 people who had been attending mass there. But, in Guernica, where the Basques had been resolving the most important issues under a large oak tree for several centuries, the residents felt safe.

"No one took the alarm seriously," Iriondo says, adding that the residents had heard the loud tolling of the church bells too often in the previous days and weeks. Iriondo, who was working as an errand boy at a bank that day, also wasn't bothered by the alarm. But, in the end, he half-heartedly obeyed the prompting of a bank employee who had fled from Lekeitio to follow him to a shelter.

"If I hadn't, I probably wouldn't be alive," says Iriondo, whose book about his experiences living in and fleeing Guernica has even been made into an opera libretto. Iriondo had originally hoped to run and join his friend Cipri in a hideout they shared just outside the town. There, he would later find the tattered corpse of his schoolmate.

'We Thought We Would Suffocate'

Instead, Iriondo took refuge with many other town inhabitants in a tiny shelter beneath a terrace. "We thought we would suffocate. One of us tried to light a match, but there wasn't enough oxygen," says Iriondo, who didn't know what else to do other than pray. After a half hour of uninterrupted explosions, the bombing appeared to be over. Unaware that the bombers were being loaded up with new bombs in nearby Vitoria, everyone rushed outside. For many of the survivors of the first attack, this meant death. In the thick cloud of smoke, they couldn't see the airplanes coming back for a second attack.

In the evening, when the bombers were finally gone and Iriondo could leave his shelter, the town that had been the spiritual and cultural center of the Basques was engulfed in flames. As the British historian Gijs van Hensbergen has written, by 7:45 p.m., Guernica had practically ceased to exit.

Hardly any of the houses, which were built primarily with bricks and wooden framing, remained intact. The town hall, the church and the hospital had been completely destroyed. That evening, the only thing remaining in its previous place was the sacred oak tree. What's more, not a single bomb had landed on the Astra weapons factory or the bridge in the suburb of Renteria, which was supposedly the primary objective of the attack.

Despite initial claims to the contrary, the Germans were not primarily concerned with clearing a path for Franco's troops. When testifying during the Nuremberg Trials, Hermann Göring, the leading Nazi figure and aviation minister since 1933, said that this effort to support General Franco was much more about having an ideal opportunity to test out his still young air force and examine in a live-fire situation "whether the material had been adequately developed."

Thus, Guernica was a dress rehearsal of sorts for the blitzkrieg and a new breed of warfare that held no regard for civilian populations. During the Franco dictatorship, which lasted from 1939 to 1975, it was forbidden to speak about the number of people who died in the Guernica attack, and the figure continues to be contested. While some sources say that 200 people died, foreign correspondents at the time put the figure at up to 3,000, although we know today that this figure was likely far too high.

Reuters journalist Christopher Holme wired back to London that it had been the most terrible air strike of all time. But German squadron leader Wolfram Freiherr von Richthofen noted enthusiastically that Guernica "has been literally razed to the ground. Bomb craters can be seen in the streets. Simply wonderful!" Later, he would admit that he had "acted a bit rowdily in Guernica." But there was also criticism from within von Richthofen's own ranks. A few days after the attack, Harro Harrer, another pilot with the Condor Legion, would write in his notes that "destroying a militarily insignificant city in this way" was an outrageous scandal in addition to lamenting the unnecessary victims.

The destruction of the holy city in the devoutly Catholic Basque region was also a problem for Franco. He had explained his campaign against the elected Popular Front of Socialists, Republicans, Catalan Liberals and Communists as being a "crusade against the godless reds," and he needed the support of the Catholic Church. The official version of events had Guernica being burned to the ground by the "red barbarians," and this version was widely publicized by the Spanish press and even remained in Spanish history books until Franco's death.

When Iriondo returned from his exile in France to his home in Spain, he had to learn these truths, and trade his mother tongue, Basque, for Spanish. In a Spanish newspaper, he saw a photo with the caption: "The Church of Santa Maria in Guernica torched by Basque Socialists."

Today, the memory still makes his voice tremble with anger. Iriondo has himself found duds and the remains of 250-kilogram (550-pound) cluster bombs and incendiary bombs that could reach temperatures of 2,500 degrees Celsius (4,500 degrees Fahrenheit). But, in Franco's Spain, the bombs that created craters in Guernica up to 16 meters (53 feet) wide and 8 meters deep were officially the lies of Republican propagandists.

A Lifelong Fear of Planes

Since no one was allowed to talk about it, the survivors were robbed of their chance to process their horrible memories. Iriondo's younger brother suffered the most. During the bombing, 10-year-old Patxi Iriondo Aurtenetxea ran liked a possessed person through the city and was forced to witness how his acquaintances, friends and relatives were torn to shreds and buried in the rubble. Several times, places where he was about to seek shelter went up in flames before his very eyes.

Patxi Iriondo reportedly spent weeks inside a train tunnel in Bilbao, where his family initially found refuge, and he even refused to go out onto the street during the day after arriving in France, where things were much safer. For the rest of his life, the sounds of airplanes and thunder would send him into a panic. In the end, he died while still young. Though doctors were not able to confirm a connection, Luis Iriondo blames his brother's early death on the serious psychological damage inflicted by the Guernica bombing.

Even today, Guernica is still fighting to ensure that people don't forget about what happened to it. The Guernica Peace Museum reminds people not only of the bombing, but also of various other armed conflicts. And Gernika Gogoratuz ("Remember Guernica"), the peace research center founded in 1987, provides financing for projects that seek to find peaceful resolutions to conflicts, hosts conferences, offers educational programs and organizes visits by Guernica survivors to schools.

In today's Germany, the word "Guernica" is more often associated with the famous painting by Picasso than with the German attack on the small Spanish city. Indeed, it took the German government quite some time to come to terms with the issue. This moment finally came in 1997, on the 60th anniversary of the bombing. Roman Herzog, Germany's president at the time, issued something resembling an apology by saying he "would like to confront the past and explicitly admit to the culpable involvement of German pilots." And the man who accepted it on behalf of the victims was none other than Luis Irionda.

This story originally appeared in German on SPIEGEL ONLINE's history portal, einestages.de. You can also read the German version.