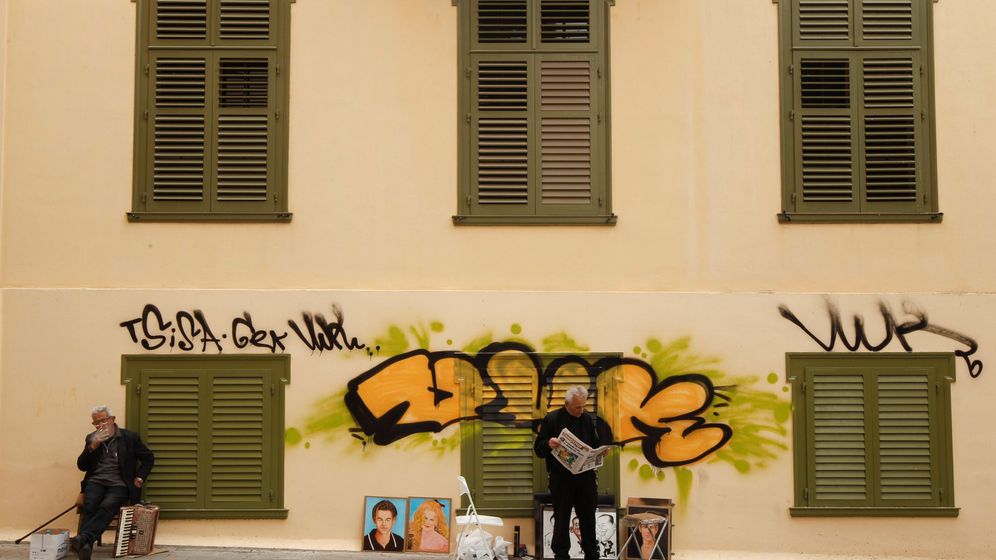 A few steps from the National Archaeological Museum in Athens, where visitors gawk at statues of Zeus and other ancient treasures of antiquity, a man crouches under a tree, wraps a rubber band around his arm and shoots up heroin.

Nearby, dirty streets are congested with drug sellers and buyers. Athenians say that cases of drug trafficking, prostitution, murder, thefts, burglaries, petty crime and illegal immigration have all increased as the Greek economy contracts.

Locals say they are seeing more signs of societal strain, with unemployment having risen to 16.3 percent in the second quarter -- up from 12 percent a year ago. Graffiti and shuttered store fronts speckle the winding downtown streets of Athens. Stray dogs and cats, some discarded by families unable to feed them, roam neighborhoods. With refuse workers often on strike these days, it is not uncommon for garbage to pile up on the streets, providing a feast for stray animals. Meanwhile, an uptick in muggings and armed robberies of even gated homes in Athens suburbs has proven deeply unsettling for Greece's middle and upper classes.

"The city's historic centre and other major areas are suffering desertification, all manner of criminal activity and manifestations of violence, insecurity, lawlessness, the impoverishment of significant numbers of people -- both native inhabitants and foreign nationals, illegal prostitution and illegal drug trading," the Athens City Council said in a statement.

"People are more afraid," said Thomas Goumenos, 32, a PhD student who was robbed for the first time recently and claims to have heard a number of other accounts of friends and family encountering crime. He says he has noticed more bars on windows, high security doors and private-funded security services for the wealthy -- developments that all coincide with broader economic worries. "There is a general fear in Greek society," he explained. "We are not sure what will happen in the next two months."

One government report estimates drug use in the Attica region, which includes Athens and surrounding areas, jumped to 12,000 problem drug users in 2009 around the time the first wave of the global financial and economic crisis hit, up from 7,400 in 2008. Drug-related arrests have steadily risen during the past decade as users find lower street prices for heroin.

"Almost a quarter of the Athenian city center is now considered off-limits by night for those unwilling to risk their valuables and, in some cases, their personal security," wrote Ioannis Michaletos, in a report for Balkanalysis.com, a site that provides research on Greece. "Athens has become arguably the worst city in the European Union (especially within the euro-zone countries) in terms of personal safety."

Thanasis Kokkalakis, a spokesman for the Hellenic Police, the Greek national police force, said the increase of illegal immigrants from Europe, Africa and Asia is contributing to the increase in crime. "We realize that there is an increase in street crime or the so-called 'crimes of emergency,' committed mostly by aliens," he said. "At the same time, serious forms of organized crime have been significantly reduced."

Murders in Greece have more than doubled since 2006, with the annual figure rising from 83 to 175 in 2010 according to police statistics. In the Athens region, homicides rose 2.2 percent during the first half of 2011 to a total of 54. Murders nationwide totalled 92 during the same period. Home break-ins jumped to 90,936 in 2010, up from 72,658 in 2009. This year, home break-ins totalled 48,268 for the first six months, on track to set new records. Extortions, armed robbery, scams, car thefts and other categories saw increases as well.

"There are many small crimes happening in Athens on streets, houses and businesses where people don't go to the police immediately," said Sakis Tsaoussis, president and CEO of Pyrsos Security, one of the largest security firms in Athens. He says ATM kidnappings are also on the rise, crimes in which perpetrators force their victims to withdraw money from a bank cash machine.

"The citizens have a right to win back the city center and public spaces," the city council wrote in its recent statement. It is calling for new solutions ranging from tax breaks for entrepreneurs willing to locate news businesses downtown, expedited deportation proceedures for illegal immigrants, better street cleaning and lighting.

Officials point out that the murder rate is still average compared to other places in Europe. Greece has mobilized more police patrols on motorcycle around the city, focused crackdowns on organized crime in major cities such as Athens. Many say the police are working hard. But that hasn't eased the fears of the people.

"Crime is more severe than in the past," said Giannis Argianas, 38, who owns clothing retailer Argianas & Co. with his father. Three armed men robbed his neighbor's house a week ago. Since police cannot cover all of Athens' sprawling neighborhoods, Giannis and roughly 18 neighbors are pooling money to hire their own security patrols.

Memories of the murder of 44-year-old Manolis Kandaris, who was killed and robbed of his video camera in central Athens in May as he was walking toward his car to take his pregnant wife to the hospital, are still fresh in the minds of Athenians. Police later arrested two Afghan migrants in connection with the crime. The slaying and other violence is also spawning greater concerns about immigrants and vigilantism by Greeks, who have attacked migrants in the city.

"In the past, most of the crime was in the middle of Athens. Now it is moving out to areas that never had anything to do with crime," said Tsaoussis at Pyrsos Security. Roughly 90 percent of his firm's business is with large corporations. But he is seeing more demand from private homeowners who want alarms, motion detectors or private patrols in their neighborhood. Tsaoussis says his services for private clients have increased by up to 50 percent in recent months and he has responded to demand by adding 100 new employees to his 1,000-person firm in the past year.

Betweem crime and painful austerity measures, some middle and upper class Greeks are considering their future options: flight from urban areas, changing their spending habits, emigrating to other countries or returning to the Greek islands where their families come from.

Kostas Goumenos, 30, lost his job as an architect three months ago. He's been working on freelance projects and living at home with his parents and brother. With the real estate freeze and recession underway, he's doubtful he will find a full time job in Athens. "I'm starting to think about moving abroad," he says, mentioning Australia, the United States or other parts of Europe as possible destinations. His younger brother already moved to the Netherlands to attend graduate school in music studies.

Goumenos' parents, both public school teachers of Greek language and history, saw their incomes drop 25 percent from a mix of wage cuts and tax increases. The family of four drivers downsized to two cars from three. They scaled back on vacation plans and are watching their household spending more carefully.

"Very good professionals are deciding to leave Greece," said Michalis Zervogiannakis, a finance director for GE Healthcare in Greece. "In the future, many more will follow." He and others compare the ensuing "brain drain" to that of the 1960s, which sent Greek professionals in droves to the United States and elsewhere for better opportunities.

He and others predict many Athenians will also choose to move back to the islands or villages where their families come from. It became typical for Greeks from the islands to move to large cities, namely Athens, for work and to keep a summer home on the island they came from. "We left our real production to enter into business," he said, suggesting Greeks focus on agriculture, manufacturing and innovation to restart their economy rather than just service industries like tourism. "You need real production in a country, not just shops to sell stuff."

Business people like Argianas see a difficult path ahead. He and his family spent €300,000 to remodel their downtown store a year ago, hoping it would help double business each year. But with public transit halted some days and protests downtown, they say revenues have fallen by 22 percent this year.

On top of that, he said 53 percent of his business income is taxed by new government rules, up from 30 percent a year ago because of austerity measures. "We are forced to fire people just to make the taxes," he says. "They force you to fire." When a special program runs out in April, he says he will have to lay off 2 of his 8 employees.

Some Athenians joke that they are now being taxed like Sweden but are enjoying the public services of Africa. In addition to new property and income taxes, schools and hospitals are also seeing cuts. Gelly Manousou, a director of a public primary school in Athens, said funding is down 50 percent at her school for basic products like paper, books and pencils. "We are on the edge of new things," she said. "We don't know what will happen the next day."

"People who live through a crisis will have opportunity for a change," said Lambros Goumenos, 60, a retired teacher.

"For 20 years, we were living beyond our means, spending more than people could afford. Now, we are trying to adapt our spending habits and our way of thinking."