The images are enough to soothe one's soul. Golden fields of grain stretching as far as the eye can see; bright yellow rapeseed flower blooming in the European countryside; drivers happily cruising down the autobahn, smiling in the knowledge that the biodiesel their car is burning does no harm to the environment.

But such a bucolic view of biofuels -- gas and diesel made from plants -- may soon become a thing of the past. The European Union on Wednesday unveiled a far-reaching plan aimed at cutting greenhouse gas emissions by 20 percent relative to 1990 and dramatically upping the share of renewable energies in the 27-member bloc's energy mix. The scheme also calls for 10 percent of fuel used in transportation to be made up of biofuels. That last element, though, is becoming increasingly controversial -- and environmental groups, this week, are leading an aggressive charge to put a stop to biofuels.

'No Way to Make Them Viable'

"The biofuels route is a dead end," Dr. Andrew Boswell, a Green Party councillor in England and author of a recent study on the harmful effects of biofuels, told SPIEGEL ONLINE. "They are going to create great damage to the environment and will also produce dramatic social problems in (tropical countries where many crops for biofuels are grown). There basically isn't any way to make them viable."

The evidence against biofuels marshalled by Boswell and other environmentalists appears quite damning. Advertised as a fuel that only emits the amount of carbon dioxide that the plants absorb while growing -- making it carbon neutral -- it actually has resulted in a profitable industrial sector attractive to countries around the world. Vast swaths of forest have been felled and burned in Argentina and elsewhere for soya plantations. Carbon-rich peat bogs are being drained and rain forests destroyed in Indonesia to make way for extensive palm oil farming.

Because the forests are often torched and the peat rapidly oxidizes, the result is huge amounts of CO2 being released into the atmosphere. Furthermore, healthy peat bogs and forests absorb CO2 -- scientists refer to them as "carbon sinks" -- making their disappearance doubly harmful.

Indeed, the Stern Review on the Economics of Climate Change, released in October 2006, estimates that deforestation and other comparable land-use changes account for 18 percent of all greenhouse gas emissions around the world. Biofuels, say activists, accelerate that process.

"We are causing a climate catastrophe by promoting agro-fuels," Greenpeace agricultural specialist Alexander Hissting told SPIEGEL ONLINE, using his group's preferred term for biofuels. "We are creating a huge industry in many parts of the world. In Indonesia, something akin to a gold rush has broken out."

The European Union seems to have taken note of the gathering biofuels storm. The plan has noted that the 10-percent goal is dependent on whether "production is sustainable," as an EU PowerPoint presentation delivered to reporters on Tuesday noted. The EU also wants to make it illegal to use biofuels made from crops grown in nature reserves or in recently clear-cut forest lands. Crops grown in places valuable as carbon sinks are also to be avoided. 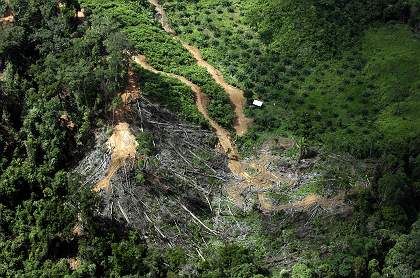 The real face of biofuels? A forest makes way for a palm plantation in Malaysia.

But critics doubt whether such clauses, which call for acceptable fields to be certified, is enforceable. "At the moment, such certification systems are very incomplete and it is very unlikely that they will ever work," says Boswell. "The biofuel supply chain is incredibly complicated."

Even EU scientists doubt whether the supposed benefits of biofuels will ever outweigh the costs. A recent report in the Financial Times cited an unpublished study by the Joint Research Center, a stable of European Commission scientists, as saying that the "uncertainty is too great to say whether the EU 10 percent biofuel target will save greenhouse gas or not." It noted that subsidies in place to promote biofuels would cost European taxpayers between €33 billion and €65 billion by 2020.

Environmentalists say that emissions arent the only serious problem created by the biofuel boom. Even crops grown in northern countries, like corn in the United States or rapeseed in Germany and the rest of Europe, harbor major dangers to the climate. Both maize and rapeseed are voracious consumers of nitrogen, leading farmers to use large quantities of nitrous oxide fertilizers. But when nitrous oxide is released into the atmosphere, it reflects 300 times as much heat as carbon dioxide does. Paul J. Crutzen, who won the 1995 Nobel prize for chemistry, estimates that biodiesel produced from rapeseed can result in up to 70 percent more greenhouse gas emissions than fossil fuels. Corn, the preferred biofuels crop in the US, results in 50 percent more emissions, Crutzen estimates.

Another issue receiving increasing attention recently is that of rising food prices as foodstuffs are turned into fuel. Price increases for soybeans and corn hit developing countries particularly hard. Indeed, there have already been food price riots in Mexico, Morocco, Senegal and other developing countries. While the price increases cannot be pinned entirely on biofuels, it has certainly played a role. In October, the United Nations' Special Rapporteur on the Right to Food Jean Ziegler called for a five-year moratorium on biofuels to combat rising prices. Using arable land for biofuels, he said, "is a total disaster for those who are starving."

Slowly, it appears that some governments are beginning to listen to the chorus of criticisms. Last autumn, the Canadian province of Quebec announced that it would cease building plants to produce the biofuel ethanol. And on Monday, the UK's House of Commons Environmental Audit Committee called for a stop in the increase of biofuel use. "Biofuels can reduce greenhouse gas emissions from road transport. But at present, most biofuels have a detrimental impact on the environment overall," committee chairman Tim Yeo said, according to Reuters.

The European Union has reacted with anger to the UK report. Andris Piebalgs, European commissioner for energy, told the Guardian that "the Commission strongly disagrees with the conclusion of the British House of Commons report."

The report, though, is music to the ears of environmentalists like Boswell. "We have been highlighting these problems for a number of years," he says. "Now it is time for the UK government to act on the committee report."