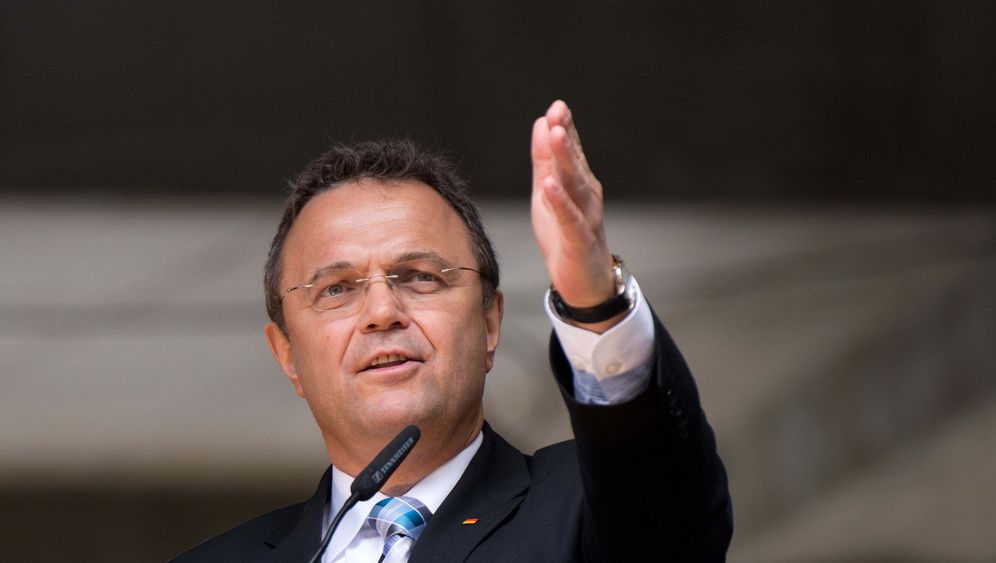 Franziska Giffey is sitting at a wooden table in Romania and trying to grasp what is happening in her neighborhood back in Berlin. Giffey, 35, is a member of the local council in the Berlin district of Neukölln. She's traveled 1,300 kilometers (800 miles) in the hope of finding an answer to her question: Why do people in Romania leave their home country to come to Neukölln, one of the poorest city districts in Germany?

She's sitting in the office of the mayor of Fântânele, 35 kilometers (22 miles) from the Romanian capital of Bucharest. The town once had 3,000 residents, all of them Roma, but a third of them no longer live here. They've moved elsewhere in Europe, and a majority of them have come to Neukölln in Berlin. There are many villages like Fântânele throughout southeastern Europe and most of them now have an outpost in Germany.

Fântânele's mayor is excited. He's wearing a sash in the colors of the Romanian flag and his shirt is neatly ironed. It's clear he wants everything to be perfect for Giffey, the politician and Ph.D. from Germany. He presses a packet of informational materials into her hand and serves peanuts, as well as espresso in paper cups. A European Union flag stands in one corner of the room. The mayor has called all city administrators here, as well as the town's two priests, and the school principal, who has lost 300 of her students to other countries around Europe.

Giffey stands up and introduces herself, and then she talks about her district. Berlin's Neukölln district has 300,000 residents of 160 nationalities, and there are 65 schools, of which nearly half offer "welcome classes" for children -- many of them Roma -- with no knowledge of German. "I open a new school class every month," she tells the town administrators gathered before her. "You must be missing those children here, aren't you?" There is laughter. Then a priest answers: "Go ahead and set up a couple more classes."

Since Romania joined the EU in 2007, the number of Romanians in Germany has nearly tripled, to 205,000. This includes both highly skilled workers and the poorest of the poor. They enter the country legally, as free citizens of the EU, and represent the greatest challenge for German integration policies. German Interior Minister Hans-Peter Friedrich of the center-right Christian Social Union (CSU) recently threatened to expel at least those who are unlawfully receiving public assistance benefits.

Giffey has observed firsthand what happens when large Roma families move en masse from one village in Romania to Neukölln and fill up an entire street. They form closed microcosms, many miniature Fântâneles, which go unnoticed by politicians until it's too late.

Giffey doesn't want to arrive too late. She wants to understand how things are for people in Romania. She says it's the piece of the puzzle she needs in order to be able to make the right decisions back in Berlin. This is why she's traveled here and why she's now sitting in the mayor's office.

"At some point the limit is reached in Germany, too," she says and casts a friendly smile around the table. No one reacts. Her problems aren't of interest here. Instead, the mayor explains that he has great hopes for German investors in the region.

Giffey is wearing her blonde hair up, a string of pearls around her neck and a gold-colored Esprit watch with small, glittering stones on her wrist. She has a calm voice and a patient manner. For the people gathered around this table, she represents Germany.

'Take Note of These Faces'

The mayor takes Giffey on a tour of his new cultural center, an unused room financed by the EU, as well as a daycare center that still smells of fresh paint. The bathrooms were sponsored by Britain, but haven't been used in the last six months. The mayor asks if Giffey could send €400 ($530) a month to cover operating costs for the center, as if he sees a German politician primarily as a traveling salesperson with a fat checkbook. Then he shows Giffey around each of the classes at the local school and comments drily, "Take note of these faces. They'll be sitting in your schools in Neukölln soon, too."

He offers to come, too, and to teach in the Roma language. "In Germany, the children need to learn German first," Giffey replies.

Their walk back to Giffey's car takes them past a grocery store that's having a clearance sale because its proprietors are moving to Berlin. Before Giffey leaves, the deputy mayor has one last question. He wears patent leather shoes and Ray-Ban sunglasses, and drives a BMW X5. He wants to know how to go about opening a restaurant in Berlin. Giffey will later comment that she isn't here to recruit workers. She doesn't understand the expectations here. And after three hours in Fântânele, she is angry. "I feel like a development aid worker," she says, as she drives past cornfields, a Penny Markt discount supermarket and a sign bearing the EU's circle of stars, a symbol of the freedom of movement that here has come to stand for the freedom to escape.

When Giffey first joined Neukölln's district council, she was in charge of EU matters. She wrote funding proposals and brought in millions for the district. She knows both the good and the bad sides of the EU.

In 2010, when she took over responsibility for education in Neukölln, Giffey toured the schools and discovered that there were many pupils from southeastern Europe who spoke no German. She had these children counted, requested more teachers from Berlin's city government, and received funding for 11 new positions.

Giffey has heard a number of statements recently that aggravate her, for example one from a Bulgarian diplomat who suggested that anyone who truly wants to come to Germany has come already, and these new immigrants from southeastern Europe are just "rotating Europeans," immigrants who shuttle back in forth, not settling in Germany but eventually returning to their home countries instead.

Next Giffey visits the national Roma authority in Bucharest to find out how the experts here appraise this emigration trend. The two bored-looking women across from her call to mind the Weather Girls. They suggest Giffey should hire Roma women, because blonde women, they say, don't stand a chance within the Roma community. Giffey asks why the children who arrive in Berlin haven't received immunizations. "If they're at home and their parents are willing, then we immunize them," the women say. Then they tell stories of parents who oppose vaccination and of Roma children with AIDS and tuberculosis. The women sound as if they have given up.

How can it be, Giffey wants to know, that some of the Roma children in Neukölln reach the age of 15 without ever having seen the inside of a school? Education is compulsory in Romania, but this is not enforced, officials at the Education Ministry explain. They could perhaps send teachers to Germany, they suggest, so that the children there could be taught in Romanian, just in case they eventually return to Romania 20 or 30 years from now.

But how likely is it that Roma children will return to a country that is poor and where they are "last on the list," as an adviser to Romania's prime minister puts it?

That adviser is sitting at a conference table in Bucharest. Water is served in plastic bottles here and two iPhones rest on the table in front of him. The man has closely cropped hair, wears a suit and speaks English well. He himself is Roma and used to travel through the country making music. Romania has a Roma strategy, he says, but only because the European Commission, the EU's executive, requires one, and it's only on paper. "If you marry a woman knowing she's an alcoholic, you can't complain about it afterward," he says. In this analogy, Romania is the drunken wife and the EU the naïve husband.

He keeps asking: "Do you understand, Franziska?" If she has a problem, he says, he's glad to help. If too many Roma from Fântânele are going to Berlin, he suggests, he can initiate some projects in the village -- Giffey only needs to say the word. She laughs, and he laughs, when she tells him the child benefits that families can receive in Berlin are 20 times what they are in Bucharest. "Bullshit," he says over and over again, and rants about his country.

That evening, Giffey sips a glass of water at a reception on the 18th floor of a modern skyscraper in Bucharest, where she has come at the invitation of the German embassy. There are hors d'oeuvres of cream cheese and salmon, and men in suits are drinking sparkling wine. A foundation representative explains that mayors in Romania are glad to see their Roma residents go.

Shortly before flying back to Germany, Giffey meets with a diplomats' working group on Roma issues in Bucharest. The representative from Switzerland says his country has no problems with integration: Roma come over during the day to beg, then travel back to France to sleep. From the French representatives, Giffey learns that their country has quietly ceased its program of returning Roma to their home countries. There is no point, the representatives say, since the Roma always come back again and in fact are glad to have been sent away (with money from the French government), saying: "Thank you, (former French President) Sarkozy, for paying for my vacation trip home." Giffey notes all of this down in her black notebook. Outside, it's raining. She heads to the airport and back to Germany.

A Growing Number of Children

Five days after her return from Romania, Giffey is attending a district council meeting on the second floor of Neukölln's district town hall. It's early evening and some women are relaxing on the town hall steps, knitting pink sweaters. These are the long-established immigrants, but Neukölln's newest arrivals are here as well, represented by a Roma woman breastfeeding her child on the steps.

The topic before the district council today is school meals. There are sausages and slices of cheesecake in the lobby, where Heinz Buschkowsky, perhaps Germany's most famous mayor of a city district, is sitting by the counter. Buschkowsky, Neukölln's mayor, was recently re-elected by the district council for a term lasting until 2016. He's eating potato salad from a paper plate and looks tired.

Giffey, waiting at the next table, says that when she returned to Berlin she requested a list of new arrivals and learned that since the beginning of this year, 68 new children have entered the local school system from Romania and Bulgaria alone.