Felcsút, located 34 kilometers (21 miles) west of Budapest, has a kindergarten, a retirement home, 1,812 inhabitants -- and a new football stadium with 3,800 seats. The Pancho Arena towers above the village's gray, single-story homes.

The stadium's architecture is modest and typically Hungarian, with its rounded shapes, abundance of wood and slate shingle roof. It's not the kind of steel and glass structure one typically sees these days. The country home of Viktor Orbán, football fan and prime minister, is located just across the street from the stadium, less than 50 meters from the entrance. The Hungarian flag flies next to the door.

From the stadium, it's only a one-kilometer walk to the local station for the Viz Valley narrow-gauge railway. The tracks were financed with the help of European Union funds. Hundreds of people would have to use the train, with its historic cars, every day for the investment to pay off. But the station is usually empty.

Mayor Lörinc Mészarós, one of the 20 richest men in Hungary, is the master of this tranquil, idyllic place. Only six years ago, he was barely making a living as a heating contractor, when an old school friend, Viktor Orbán, became the prime minister in Budapest. Mészarós's company built the stadium in Felcsút, the narrow-gauge railway and the football academy for young players.

'The Good Lord' and Viktor Orbán

Today he runs a hotel chain and owns holdings in various companies. Mészarós openly admits that he owes his tremendous success to "the good Lord" and Viktor Orbán.

Orbán appears to be turning childhood dreams into reality in Felcsút: his own football stadium, where he can watch the home team's games from the VIP stand; a house with a view of the stadium where his heroes play; and, finally, a very large model railway.

But Felcsút is also a vivid, miniature version of how Orbán runs the country. Since winning parliamentary elections almost seven years ago, he has rigorously gained control over the country's machinery of power. He had a widely criticized press law passed, deprived the constitutional court of power and imposed a new constitution on Hungary. In late December, he took steps that enable him and the government to circumvent the country's nuclear regulatory agency.

Most importantly, Orbán is installing his supporters in key positions in the administration, the security apparatus, the government media, corporations and the courts -- and he has often had their terms in office extended to secure the control of his Fidesz party. Checks and balances, those control mechanisms intended to hinder despotism, are incompatible with Orbán's ego. Even the economy cannot escape his grasp.

Deciding Who Gets Rich in Hungary

Dependencies are important, and to create them Orbán surrounds himself with oligarchs who are not only enriching themselves, but also reinforce his own power. The prime minister systematically parcels out government loans and public contracts to his fellow party members. He decides who gets rich in Hungary. An entire group of loyal multinationals are now prepared to secure Orbán's rule with their millions.

New corruption scandals emerge almost weekly, thanks in part to András Decsö, the star among Hungary's handful of investigative journalists. He achieved his latest coup two months ago. Decsö had been sent videos depicting a meeting between a controversial attorney and Antal Rogán, who is Prime Minister Orbán's chief of staff. The politician had denied the meeting had ever taken place. Another video depicts businesspeople arguing over how to use the government-owned Eximbank to secure commissions for a nuclear power plant deal.

There is a pattern to potentially corrupt ties under Orbán. Even the most senior members of the government (Rogán is considered the third most powerful person in the country) are very closely linked to large companies. It appears that public tenders for major projects are often conducted purely for show. The independent Corruption Research Center Budapest reports that it is becoming more and more common for only one bidder to participate in the process, and that the companies that win bids are usually owned by people with good relationships with Orbán.

As a young politician, says journalist Decsö, the prime minister learned how important good connections in business are. At the time, communist old-boy networks were often behind opaque company structures, financed parties that were well-disposed to them and dominated the media. "It was traumatic for Orbán," says Decsö. "He wants to be in charge when deals are made."

It is a declared goal of Orbán's Fidesz party to form a "domestic entrepreneurial class," so that Hungary will become "strong in agriculture and industry." The government's promotional policies sometimes benefit Orbán's family, including his son-in-law István Tiborcz, who has been married to Orbán's daughter Rahel since 2015. After studying law, Tiborcz founded an electronics company that earned a profit of only 10,000 euros in the first year. But since his father-in-law became prime minister in 2010, things have been looking up. In 2014 and 2015, the company was awarded contracts for about 65 million euros to produce LED streetlights for cities and towns run by Fidesz mayors throughout the country. Because the projects also received EU funding, the European anti-fraud office OLAF launched an investigation.

Orbán's son-in-law has since sold his shares in the company and has invested in land and real estate. He made headlines when he visited Bahrain with his wife in July. The Gulf nation's energy minister met with the couple and they discussed oil deals, although whatever they agreed to remains a secret.

In 2015, the Hungarian magazine Forbes estimated the assets of the Orbán clan at about 6.9 billion forints (more than 22 million euros). The family has little to fear when it comes to unpleasant probes into its finances. Orbán's party has filled positions in control bodies, such as the audit office and most courts, with its own people. The attorney general is often seen with the prime minister in the VIP box at Felcsút.

'Freedom Is in Jeopardy'

The party defused laws that got in its way long ago, including one that excludes businesspeople with financial ties to the governing party from bidding processes. The fourth estate has been brought almost entirely into line. In October, Orbán loyalists shut down Népszabadság (People's Freedom), a critical newspaper. Deputy Editor-in-Chief Márton Gergely no longer has an office, but he does have business cards, on which he has crossed out half of the name of his newspaper, leaving only the word "People."

"Freedom is in jeopardy in Hungary," says Gergely. Népszabadság was the country's largest political daily newspaper, but it was critical of Fidesz. The paper was owned by the Mediaworks Group, which also runs regional newspapers. At first, the management still claimed it planned a restructuring of the editorial staff, but then negotiations over annulment contracts for employees began.

Gergely has since been relieved of his position. Together with his colleagues, he is trying to clarify what happened. The Mediaworks Group belongs to an Austrian businessman who buys companies in Hungary and the Balkans. According to Gergely and his colleagues, the man also had a loan with a state-owned bank. "That made him susceptible to blackmail," says Gergely, "and he was apparently instructed to get rid of us." Mediaworks, for its part, claims that the decision to shut down Népszabadság was made out of economic necessity.

A few weeks later, the Austrian businessman sold the Mediaworks Group to a company that is believed to belong to former plumber and Orbàn friend Lörinc Mészarós, who denies having anything to do with the purchase.

With the move, the Orbán government has not only rid itself of a troublesome newspaper, but it has also gained control over various regional papers. A number of editors in chief at those publications have already been replaced. On Christmas Day, all of the newspapers in the group ran the same story on the cover: an uncritical interview with Orbán.

Surveys show that 67 percent of Hungarians believe their government is corrupt, and yet it still enjoys high approval ratings.

But there are also setbacks that even Orbán is unable to prevent. His home team, Felcsút Akademia FC, was relegated to the second division last season. 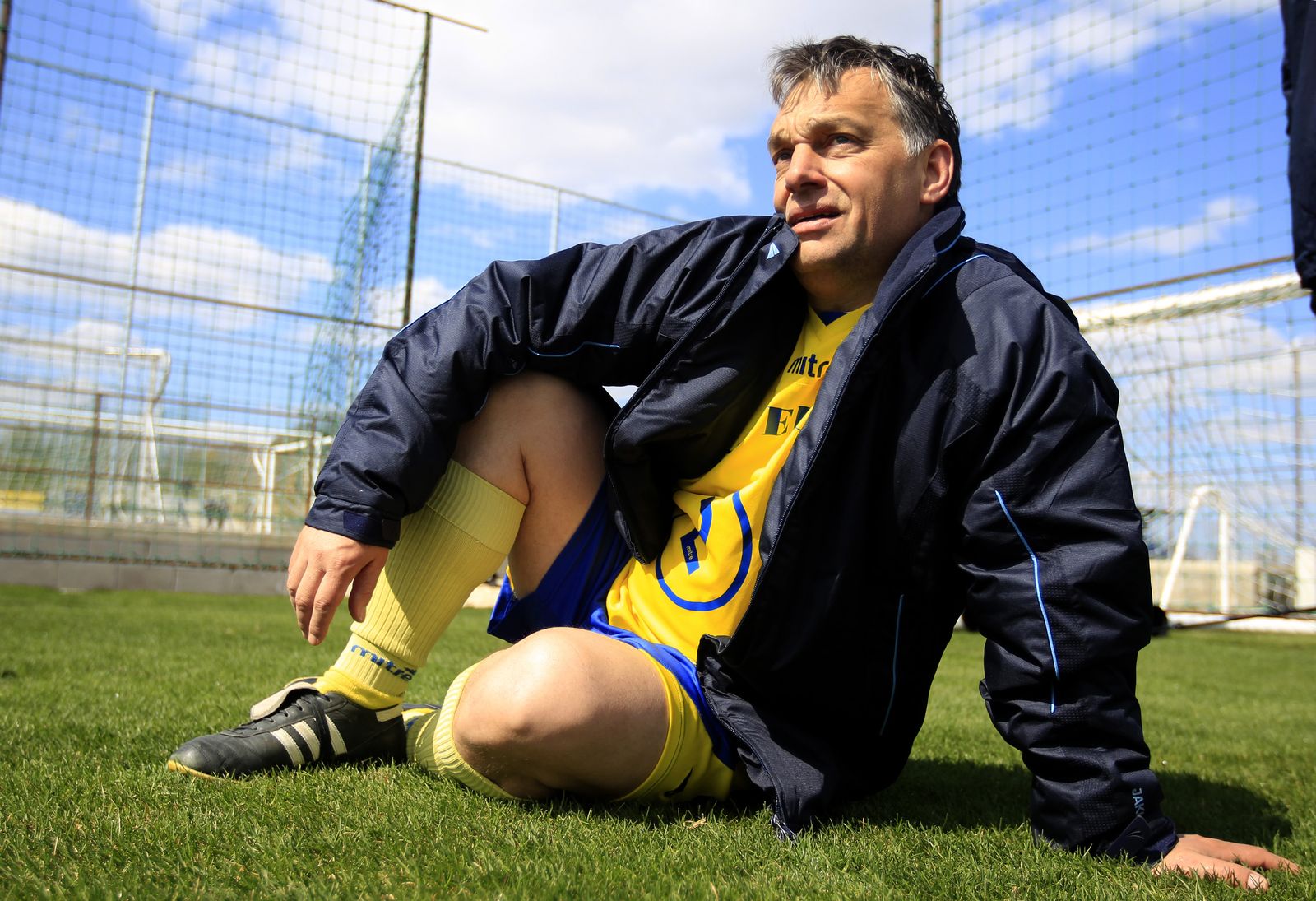