Wolfgang Schäuble is as master of portraying political chaos as a strategy. "We need a solution that lasts for a while with Greece," the German finance minister announced last Thursday. But the truth is that he is determined to continue pursuing Germany's approach of muddling along through the euro crisis, much to the annoyance of Germany's partners.

In Brussels and at the International Monetary Fund (IMF), there is a growing realization that it's time for honesty, especially because the German government also wants Greece to remain in the monetary union. "Things cannot go on this way," says a European Union diplomat. The IMF is openly demanding a "real solution," and yet that is precisely the opposite of what is happening at the moment.

The Greek rescue is a tale of self-deception. In May 2010, officials said that a bailout package worth €110 billion ($140 billion) was sufficient. It is now clear that even the second bailout package, worth a total of €130 billion, is too small -- and this is based on calculations that are only about six months old.

But now there is another shortfall, this time of €33 billion. It's a disaster for Schäuble and Chancellor Angela Merkel. In the run-up to German parliamentary elections next year, both politicians are determined not to confront taxpayers with a real, and therefore expensive, summary of costs.

This is why policymakers have been trying to come up with ways to close the gap with accounting tricks by the time the finance ministers of the euro zone meet this week. The politicians are acting as though they were Greek statisticians.

The European Central Bank (ECB), for example, is once again expected to play the part of savior. Very short-term debt securities called treasury bills, or T-bills, are one of Greece's sources of funding. Under current agreements, the Greek government is only allowed to issue up to €18 billion in these securities. Greek banks, which get their funding almost exclusively through the central bank, are the main buyers of the T-bills.

This is why the limit on the T-bills was in fact supposed to decrease to €12 billion. But now lawmakers are discussing the possibility of continuing to accept the original amount, which would yield €6 billion.

The ECB would then be expected to contribute another €7 billion. After all, in the crisis, the central bank bought up Greek sovereign debt worth €45 billion on paper. But because the ECB paid less than the face value for the bonds, it stands to collect a profit when they mature. Germany wants to include these potential billions in future profits in current fixed planning.

The remaining gap in the bailout program is to be closed with a number of other measures. One of the plans calls for reducing the interest rate on Greek loans once again. The only problem is that this will presumably prompt other countries that have requested aid to demand better terms. "I don't have the impression that anyone in Berlin has really thought about the consequences of an interest rate reduction for Athens," says a Brussels insider.

His view reflects the growing frustration with Germany's stubbornness among many members of the monetary union. The view in Brussels is that the German government is now completely focused on the 2013 election. Just how far Germany's isolation has progressed was evident at a meeting of the euro zone finance ministers last week to discuss its proposal to reduce Greece's debt burden.

Under the plan, the government in Athens would buy back the debt it still has with private creditors like banks. Because the market value of the securities is low, €10 billion would be enough to pay off at least €30 billion in loans.

This sounds very nice in theory, but with the exception of Schäuble, all those present at the meeting rejected the instrument, either because their parliaments would refuse to approve the necessary funding for the bailout fund, or because they don't believe it would be effective. This is because the bond prices could rise as soon as the negotiations over repurchase begin.

In the midst of all this, it is clear that Greece cannot support its debt burden, most recently more than €300 billion, in the long term. But the chance of eventually recouping the money it lends is the IMF's condition for continuing to take part in the bailout program. IMF Managing Director Christine Lagarde has made it clear that she has had enough of deceptive maneuvers in Europe.

For Merkel and Schäuble, an IMF withdrawal would be tantamount to an admission of failure, and not just because it was the German government that once insisted that the respected organization participate in Europe's programs. It would also signify the loss of close to €20 billion in promised aid for Greece. The euro countries would have to jump in, with Germany alone having to contribute about €6 billion. Even a political grand master like Schäuble probably couldn't spin that as a strategy anymore. 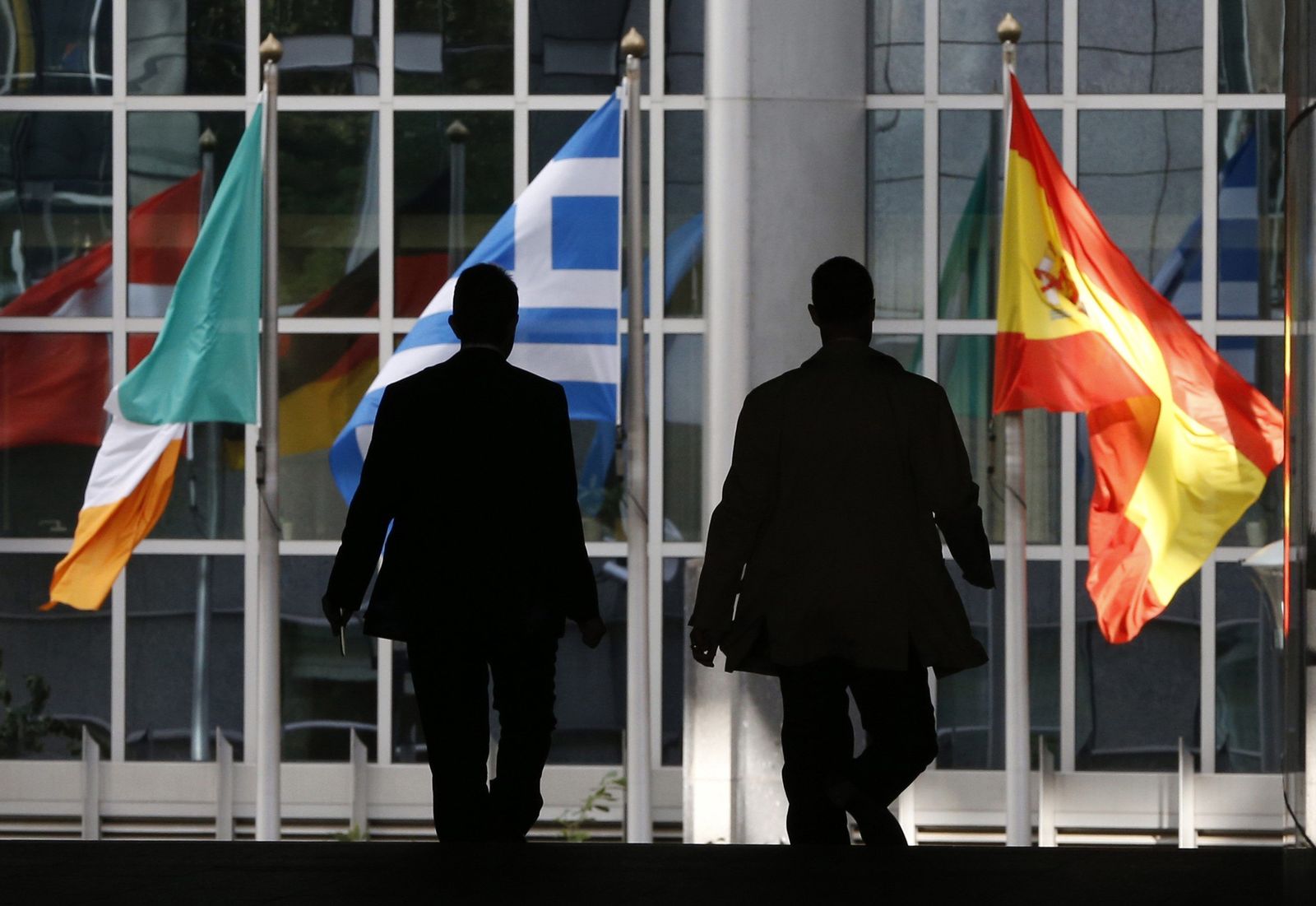 The Irish, Greek and Spanish flags flying in Brussels. Berlin's euro-zone partners are growing weary of its Greece tactics.