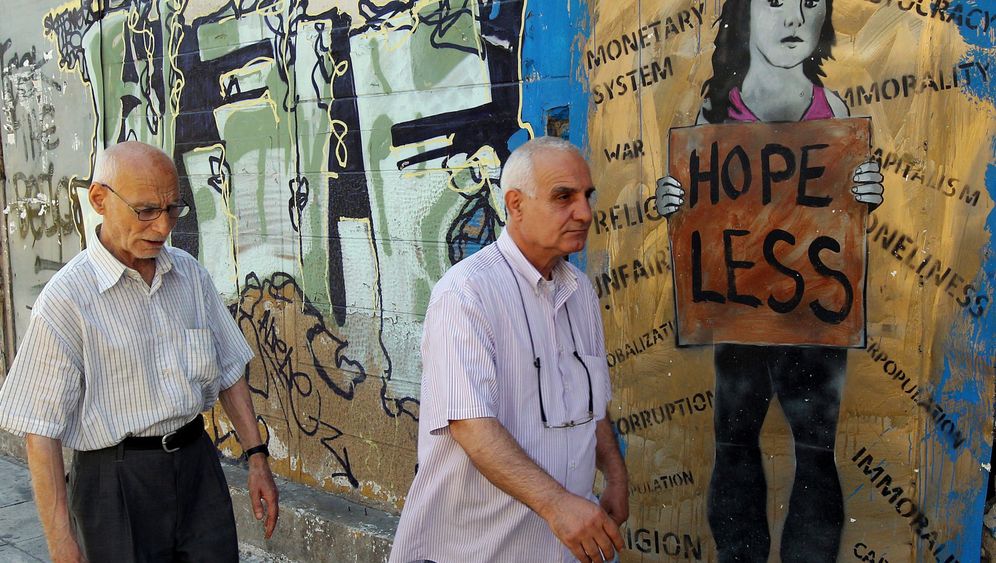 It ought to be easy, says Peter Economides, as he sets his iPhone to silent mode and waves his hand in the direction of a row of windows. Behind the glass, his balcony juts out toward the water; pine trees frame the view of a thin strip of beach and the sea beyond.

Greece, Economides says with a sigh.

He knows that it isn't easy, despite the sand and the sea. Economides, 59, is wearing jeans, a T-shirt and Crocs, and he is sitting at a table made from the wing of an airplane. "If you can't convince yourself, you won't be able to convince others. Then you don't get the girls," he says. "And then you're the loser."

In this case, the loser, the one who feels bad and doesn't inspire the confidence of others, is called Greece. And Economides, whose name sounds straight out of a B-movie about the crisis, wants to change that. He is an advertising man by profession, and a very successful one at that. His ideas have won prizes in Cannes.

He sold Nescafé to the Chinese when everyone was betting that they would stick to tea. He convinced women to use Gillette razors and he was partly responsible for Apple's "Think different" campaign. He turned the slogan that initiated Apple's transition from a near-bankrupt insider company to a global technology icon into a formula for success -- worldwide. That was in 1997.

At the moment, the country is in worse shape than Apple was in 1997. The sun shines almost every day in Greece, a country blessed with plenty of islands with white sandy beaches, and with places like Delphi, Olympia and the Acropolis, and yet its image couldn't be worse. Even though it's no more than a three-hour flight from the rest of Europe, tourists are avoiding the country. In May, bookings were 50 percent lower than at the same time last year.

The Desolate State of Greeks

But it isn't just foreigners who feel uneasy about the country. Greeks feel the same way. Some 87 percent of those polled are unhappy and worried about the future. A majority of 20 to 40-year-olds are thinking about leaving the country, and many have already left.

"It's devastating," says Economides, pointing that Greece has become little more than a horrifying headline, even in the minds of Greeks. He is worried about the desolate state of his countrymen. "We can't just continue to sulk and point our fingers at everyone else."

And while this is exactly what Greek politicians are doing, as they perform one tortuous maneuver after the next, people like Economides are trying to save what is worth saving. For Economides, those things are Greece's potential and ideas for a better future. By the time the institutions realize how bad things stand for the country and for Greeks, it'll be too late, says Economides.

His initiative is called "Ginetai," or "It can be done." More than just a mantra against the depression, it's also a plea for action. It is an important message in a country where people tend talk a lot, and loudly, but where little is actually accomplished. Economides wants to create a reserve, a protected space, where ideas can grow and be protected against adverse conditions -- against the crisis and against politics.

He envisions all of this unfolding in a giant building, an "open space" containing offices, studios and a cafeteria, a little like Google's headquarters in Switzerland or the Frank Gehry-designed former headquarters of the TBWA advertising agency in Venice, California, where Economides once worked. Those interested would apply by submitting a business plan and a written proposal. If accepted, they would receive a grant and -- an important perk given Greece's bureaucratic jungle -- receive legal counsel.

Not a bad plan, one might think, for a country that, despite being part of the euro zone, is ranked a distant 100th on the World Bank's Doing Business Index. "The country is going to the dogs; we have to start somewhere," says Economides. He is familiar with creating incentives, the kind that encourage people to stay, especially young people. "We need the crazy ones, the ones who take their thinking to the next level," he says.

Greece is not an industrialized nation, and it will probably never export power drills or smartphones. And probably not even solar power because it lacks the necessary infrastructure. "The only thing we have," says Economides, "is our soft power." He is referring to creative people who haven't been ruined by nepotism and corruption yet. He raves about a Greek designer in London and a Greek researcher in Boston.

There are many other examples. But they are all abroad.

Stefanos Sitaras, a 22-year-old movie director, now lives in Los Angeles. When Sitaras was 16, German director Wim Wenders predicted that he would attain "immortality as a filmmaker." "To be successful, you have to leave Greece," says Sitaras. Sometimes the distance improves one's perspective on things. His native Greece is stuck in its fossilized structures and many Greeks don't even want to change, because that would mean fighting their weaker selves, "and that would be pretty painful," says Sitaras.

He is currently shooting a promotional clip for Athens with a few friends -- "My Athens," a filmed eulogy to his hometown. "It will probably be more successful through Facebook and YouTube than all the ads that the Tourism Ministry is running," he says.

Economides envisions creating space in his think tank for people like Sitaras, so that they won't have to leave their country to be successful anymore.

"Performance and achievement are bad words here," says Economides. He likes both, but he has nevertheless chosen to live in a country where a person can do fairly well merely by knowing the right people. Born to Greek parents in South Africa, Economides has also lived in Mexico and Hong Kong. In 1999, he left New York "for the sunsets along the Attic coast," as he puts it. He also left for the sea. Greece was an inspiring place at the time, says Economides. But then it joined the euro zone and with it came the lunacy of excessive borrowing and the phone calls from banks -- prior to Easter, Christmas and birthdays -- from people trying to convince you to borrow a few thousand euros to buy yourself a nice present. In the process, Greeks turned into foolish consumers, says Economides.

The big party was followed by a great emptiness.

Greece used to have a different image, as a romantic place instead of as a home to junk and radicals. There were Callas and Onassis with their beautiful faces and their glamor, and even Zorba, the rogue, was popular abroad. But then the crisis happened, and Zorba the Greek came back like a boomerang. There had been too much fraud and deception. Greece had become the home of early retirees, people falsely claiming to be blind and farmers who drove Porsche Cayennes but no longer harvested their olives.

To explain that human capital is the most important currency for a bankrupt country, Economides is standing in front of a large LCD screen in a conference room at New York University on a Sunday in April. He is surrounded by members of the Greek America Foundation, most of them wealthy diaspora Greeks who have turned their good ideas into reality away from home. He wants to enlist their help to save Greece.

Economides is now wearing a jacket over his T-shirt and a serious expression on his face. Time is of the essence. "The others," he says, "are more cunning. They'll take away our young people." He shows a film called "Start up Chile," part of an initiative by the Chilean government, which is offering $40,000 to creative young people who are willing to move to Santiago and turn their business plans into reality.

Economides' Ginetai is the antidote. He wants to surprise the world, positively for a change. Evangelos Venizelos, the head of the Panhellenic Socialist Movement (PASOK), thought it was such a good idea that he wanted to use Ginetai in his campaign, but Economides refused to allow it. He expects nothing from Greek politics, no matter what the name of its protagonists happen to be.

Greeks are deeply skeptical of their own political class, with 96 percent of the population having no confidence in their elected representatives, according to a poll. "We're just happy that they don't get in our way," says Economides.

Ginetai is to be financed through a private fund. Economides is negotiating with major corporations as well as with wealthy families, of which there are many in poverty-stricken Greece. The foundation of shipping magnate Stavros Niarchos has pledged €100 million to combat the crisis. Economides has to find the right people.

One of them is Spiro Pollalis. On a Friday in June, Economides and Pollalis were standing in front of the abandoned terminal at the old Ellinikon Airport in Athens. It was only 9 a.m., but it already felt as though someone were holding a blow-dryer over the area. Pollalis, 56, actually teaches architecture at Harvard University. But as of last fall, he is also the head of Hellenikon SA, a company charged with developing what is perhaps Greece's most valuable piece of real estate. He is in charge of more than six million square meters (1,483 acres), complete with a yacht harbor and ancient ruins.

There have been plenty of different plans for this small piece of prime real estate, three times the size of Monaco and 10 kilometers (six miles) from the Acropolis. It was to become a second Central Park or another Las Vegas, sold or leased for a huge amount of money. But, as is so often the case, nothing happened.

Finnish architect Eero Saarinen designed the terminal, a concrete structure resembling a UFO that is now a protected monument. The glass façade looks out to the sea, Agina Island lies across the water. "This is it," says Economides.

The Saarinen building is to house Ginetai, while Pollalis, the architect, intends to build a model city on the remaining land. Economides envisions the development becoming a microcosm, one that could point the way for the rest of the country, a place where everything works -- or at least works as well as anywhere else.

Pollalis only applied for a sabbatical for the job in Athens. "I want to be able to go back at any time," he says. The Harvard professor is now standing on the flat roof of the Saarinen UFO. Three old Boeings are wasting away to his left, while the Olympic baseball field lies to his right. Ginetai is a beginning. Now it's up to the investors. "If we do nothing with all the money that we've received, then we didn't deserve it," he says. "I would be much tougher with us than Ms. Merkel is being."

On the way back to downtown Athens, Pollalis sits in his air-conditioned Mercedes while the traffic begins to back up outside. The best thing, he says, almost with a curse, would be to blow everything up and start all over again.

It isn't entirely clear whether the professor is only referring to the narrow arterial that connects southern Athens with the city center. Or whether he means more.