It was later than they planned. But finally, just before 4 a.m. in Brussels, the 17 heads of state and government in the euro zone announced that they had reached an agreement on the way forward in the ongoing debt crisis. Greek debt, French President Nicolas Sarkozy announced, was to be slashed by 50 percent.

"The world was watching us today and we showed that we reached the correct conclusions," said German Chancellor Angela Merkel after the summit had finally ended. She said she was "very pleased" with the result.

In addition to the significant debt haircut for Athens, euro-zone leaders also agreed to require European banks to increase their core capital ratios to 9 percent, a measure aimed at preventing the sovereign debt crisis from becoming a second banking and financial crisis.

The euro-zone member states also agreed to boost the impact of the euro backstop fund, the European Financial Stability Facility (EFSF), to around €1 trillion ($1.4 trillion). While not providing specifics, it will likely be a combination of two options which had been widely discussed in the run-up to the meeting. The first is a first-loss insurance model, where the first 20 percent of any investments in euro-zone sovereign bonds would be guaranteed be the EFSF. The second envisions the EFSF backing an investment fund to attract outside money from pension funds and national investment pots, such as the China Investment Corporation. The final details are to be worked out at a euro-zone meeting in November.

Still, Sarkozy has already begun the process of attracting investors. He said he plans to speak with Chinese President Hu Jintao on Thursday to encourage him to invest in the EFSF fund. Jintao has in the past indicated he would be willing to help Europe solve its ongoing debt troubles.

'Europe Must Never Find Itself in this Situation Again'

"These are exceptional measures for exceptional times," said European Commission President Jose Manuel Barroso after the summit had ended. "Europe must never find itself in this situation again."

The debt haircut for Greece represents a major increase over the 21 percent cut private creditors had agreed to at a summit in July. One of the significant challenges facing the Wednesday night summit was to present a much greater reduction of 50 percent as being voluntary as well in order to prevent ratings agencies from declaring an outright Greek default. In order to sweeten the deal, euro-zone leaders offered up a €30 billion guarantee on remaining debt held by private investors.

The Institute of International Finanance (IIF), which negotiated on behalf of the banks, said in a statement that the challenge would now be that of making sure that all private bond holders adhere to the deal. Details are expected to be finalized in December before bonds are swapped for new ones in January.

The debt haircut for Greece represents a €100 billion reduction in the country's debt burden. As a result, the country's debt pile will represent 120 percent of its annual economic output by 2020 instead of its current 160 percent today. Under today's conditions, Greece's debt would have risen to 180 percent of gross domestic product by 2020 without the deal.

In addition to the €30 billion in bond guarantees, the euro zone has also agreed to make €100 billion in new loans available to Greece. The resulting €130 billion package replaces the never-finalized €109 billion package European leaders agreed to in July. It had become apparent in recent weeks that the July agreement was insufficient and that Greece was in need of significantly more funding.

"The debt is absolutely sustainable now," Greek Prime Minister Giorgios Papandreou told a press conference on Thursday morning. "If we manage to implement reforms fast, it (a return to markets) will not be 10 years. It will be much faster."

Many had criticized the plan to leverage the EFSF in the run-up to Wednesday evening's summit. But a consensus had developed that there was little choice. The fund is tasked with providing bailouts to euro-zone member states in need (it already has provided some €150 billion to Portugal and Ireland), helping European banks should the need arise and buying up bonds of heavily indebted euro-zone countries to keep down their borrowing costs. But with Italy and Spain looking wobbly in recent weeks, it became apparent that the fund's €440 billion lending capacity would not be enough. The first-loss insurance plan, it is hoped, will attract more investors to purchase bonds from those countries.

But Herman Van Rompuy, president of the European Council, the powerful EU body that includes the leaders of the member states, sought to downplay concerns about efforts to leverage the backstop fund on Thursday morning. "There is nothing secret in all this," he said. "It is not easy to explain, but we are going to do more with our available money, it is not that spectacular. Banks have been doing this for centuries."

The new capital requirements for European banks are an effort to prevent the Greek debt haircut from doing too much harm to the banking sector. Many leading European banks, particularly in France, are heavily invested in Greek bonds. The agreement will require the banks to raise a total of €106 billion by a June 30, 2012 deadline -- much less than some had estimated was necessary. The requirement means that German banks will have to raise some €5.2 billion. If they are unable to reach the target themselves, their home countries are to help out. Only should that prove insufficient will the EFSF jump in to help.

"Because of the complexity of the issues at stake, it took us a full night," Sarkozy said. "But the results will be a source of huge relief worldwide."

Editor's note: You can read a PDF file of the official concluding statement from the EU summit here. 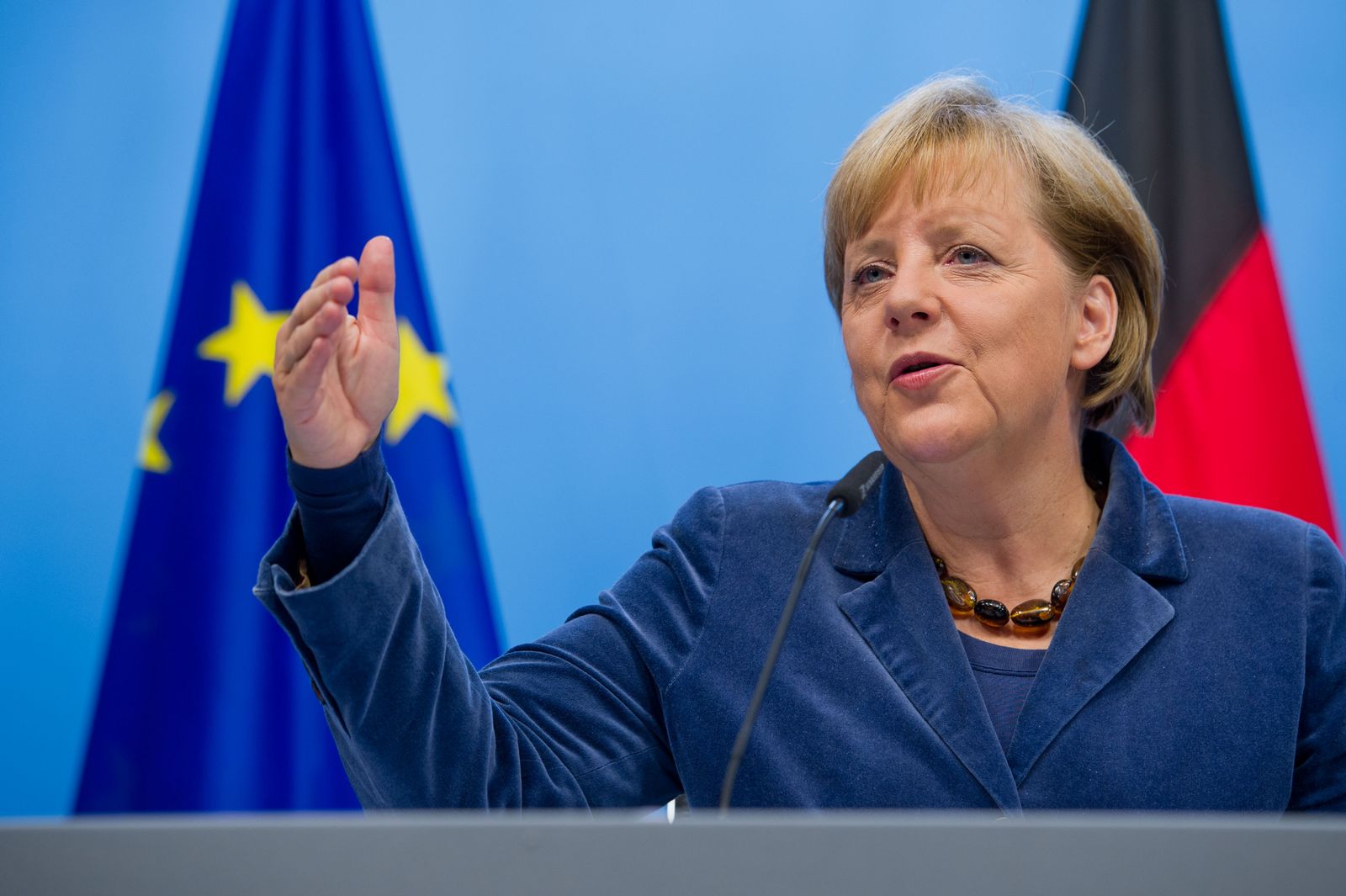 German Chancellor Angela Merkel was all smiles on Thursday morning.