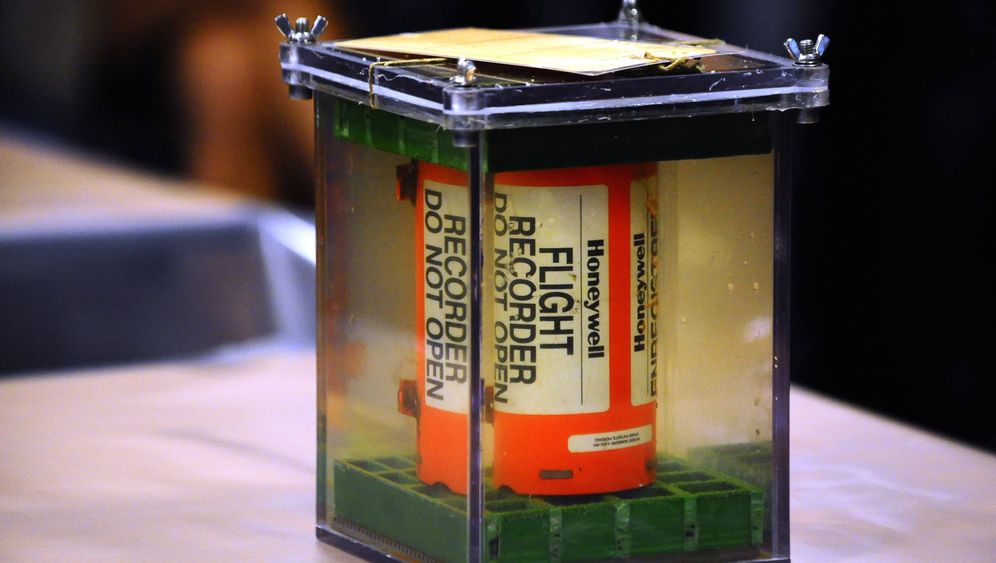 In the last week -- almost two years after Air France flight 447 went down in the Atlantic on its way from Rio de Janeiro to Paris -- French investigators have recovered the plane's cockpit voice and data recorders from a depth of almost four kilometers (2.5 miles). French police on Thursday also reported that they had recovered at least one body from the long-lost wreck.

The remains of 50 passengers were recovered and identified on the surface of the water in the days after the flight disappeared in a storm on June 1, 2009. But underwater robots recently discovered the wreck and photographed a number of bodies still fastened in their seatbelts on the Atlantic Ocean floor. The task of recovering these bodies is a difficult and delicate endeavour now dividing family members.

"No one has informed or asked me about it," said Dagmar Hellhammer, whose son Claus-Peter was among the 28 German victims who died in the crash on June 1, 2009.

She can hardly imagine just how his body might be brought to the surface, she said. "The thought of that robotic arm tugging on my son is horrible," she told SPIEGEL ONLINE. "And how will they get his body into the transport cage without damaging him?"

The victims have lain together in their watery grave for two years already, and she can live with knowing it will remain so in the future, Hellhammer said.

All 228 people on board died in the crash, which ranks as the worst in Air France's history. Shortly after the incident some debris and a fraction of the victims were found on the ocean's surface. The bulk of the plane had vanished, and its whereabouts remained a mystery until last month.

Experts say a recovery operation will be difficult. Because of a low oxygen content in the water at that depth and chilly temperatures along the sea floor, the bodies remain relatively well-preserved. But they are in danger of swift decomposition the moment they are exposed to different conditions.

"We have no experience with the recovery of organic material on this scale at such great depths," said Klas Lackschewitz of the Leibniz Institute of Marine Sciences (IFM-Geomar) at the University of Kiel, which loaned out its autonomous underwater vehicle "Abyss" to the mission.

"In principle it is possible, but very hard to imagine," he added.

An unmanned submarine from the Alucia first identified the submerged airliner on April 3 in a murky part of the Sargasso Sea, northeast of Brazil's Fernando de Noronha islands. Another underwater robot plucked the voice and data recorders from the wreck. They were hauled aboard a French recovery ship called the Ile de Sein.

The metal casings on the devices are "in good condition," said Jean-Paul Troadec, head of France's BEA civil aviation safety bureau -- though officially such casings are required to endure deep-sea water pressure for only a month after a crash.

Experts fear the built-in flash cards -- data devices similar to those in digital cameras -- may have sustained water damage. But Troadec told the French daily Libération that the BEA possesses high-level decryption technology that has already proven useful for recovering damaged data.

Engineers hope to attempt data recovery next week. If the cards remain intact, it could take just a few hours to retrieve the flight information. If they are damaged, it may take days or weeks before the cause of the mysterious accident is known.

"I can only hope that the data analysis will be conducted by independent experts," Dagmar Hellhammer said. "All of the results must be made public and available to everyone."

"If it was technical defects construction mistakes, this must be made known and immediately changed to prevent further crashes."

No Place to Mourn

Meanwhile Jean-Baptiste Audousset, head of one AF447 victims' association, has called for authorities to make the crash site a "place of remembrance" with an anchored memorial stone on the sea floor in honor of those who died.

Most of the German victims' families, however, reject the suggestion.

"They want the bodies recovered, because for many it is a burden that their relatives are still there below and they have no place to mourn," said aviation law expert Elmar Giemulla, who represents the families of the 28 German victims.

"If it's technically possible to recover them, they should do it."

Giemulla decided not to file a claim against France on behalf of his clients after they received damage payments from Air France that were both on-time and more generous than the amount prescribed by French law. The deadline for the statute of limitations on such claims is May 31.

Still, the renewed chance of clarifying the cause of the crash has stirred uncomfortable emotions among the families.

"Everything is started again. It's like it was on the first day," Giemulla said. "They're all hoping the new facts will end their nightmares, which are only based on speculation."

Psychotherapist Sybille Jatzko told SPIEGEL ONLINE she has met with the AF447 families twice. "It is enormously important for the relatives to know the truth," she said. "Only then can they find peace."

Some family members want the bodies recovered so they can be buried, she said, while for others this could be devastating -- "mainly for those who already saw the ocean as a grave."

At the time of the crash a severe storm was raging over the Atlantic, and it is still unclear why the pilots chose not to fly around it, as two other planes did just 20 minutes before and after. Many questions remain: Was it a technical defect, a mistake by the pilots, or an unlucky chain of events?

Did the speed sensors fail due to ice crystal damage? This has been a problem for sensors by French firm Thales, which were installed on the state-of-the-art Airbus A330 jetliner. While other airlines flying the same model chose to replace them with sensors from Goodrich, a US firm, Air France ruled this out, critics say.

Meanwhile much is at stake for both Airbus and Air France.

French judge Sylvie Zimmerman began preliminary proceedings against Air France this March for negligent homicide. According to her case, in the year and a half before the accident there were at least a dozen similar cases of speed sensors icing over -- but Air France pilots were informed too late.