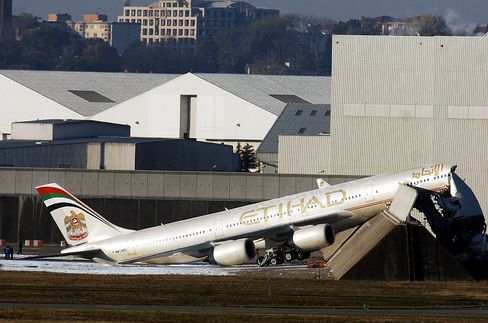 The Airbus A340-600 destined for delivery to Etihad Airlines failed to pass its last tests on Nov. 15 at the Toulouse-Blagnac airport.

Ten people were injured on Thursday afternoon, when an Airbus 340-600 crashed through a barrier and rammed into a wall during tests of the plane at the Toulouse-Blagnac airport, in France.

French government officials reported that the nine people on board, including three seriously, and one person on the ground were injured. But none of the injuries were life threatening.

The plane was undergoing its last set of tests before being delivered to Etihad Airlines, and seven of the passengers on board were employees of the Abu Dhabi-based carrier.

The accident happened when the airplane's four engines were throttled up and the brakes applied. Airbus Chief Operating Officer Fabrice Bregier said that the plane lurched into the barrier and wall "for reasons still unknown."

France's environment and transportation minister, Jean-Louis Borloo, "immediately requested" a technical investigation into the causes of the accident, which took place near Airbus headquarters.

The Airbus A340 is the Tolouse-based company's first four-engine plane, and it has been in production since 1991. The A340-600 model is the longest passenger aircraft in the world, seating up to 472 passengers. Seventy-four are currently in operation -- mainly in the fleets of Lufthansa, Virgin Atlantic and Emirates.