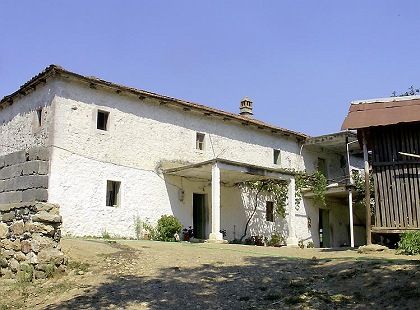 Burrel seems to be under a curse. Nothing is left of the old caravanserais in the mountains north of the Albanian capital Tirana, which once served as way stations en route to the Adriatic Sea. The city is home to 18,000 people who live in run-down, communist-era apartment blocks. In the past, most of them earned their living in the surrounding mines.

Driving to Burrel is an ordeal of negotiating tight serpentine curves and dodging crater-like potholes. Countless memorial plaques line both sides of the road. Many of the dead were gangsters, explains the Albanian driver, Fatmir. In the late 1990s, he says, Burrel was the most dangerous city in Albania. Three competing Mafia families terrorized the local populace, until the gangs destroyed one another. Most of the killings, according to Fatmir, happened on this steep and lightly traveled road.

Albania's notorious dictator, Enver Hoxha, who died in 1985, was also inspired by the city's remoteness. He had his most dangerous political enemies locked up, usually for life, in 1.5 square-meter (16-square-foot) cells in a grim prison in the center of the town. Burrel was considered synonymous with hell on earth, and not much of that has changed.

Now the town and its surroundings are suspected of having been the site of a Dr. Frankenstein-like laboratory, where people are believed to have been essentially slaughtered and disemboweled as part of a lucrative organ exporting trade. This, at least, is what Carla Del Ponte, the Swiss former chief prosecutor of the United Nations War Crimes Tribunal in The Hague, claims in her recent book published in April, on the legal processing of the wars that marked the break up of Yugoslavia.

Del Ponte reports that, "according to reliable information," after the Kosovo war ended in June 1999 rebels with the ethnic Albanian Kosovo Liberation Army (KLA) took up to 300 prisoners, mostly Serbs, to the northern Albanian cities of Kukes and Tropoja, where they were locked into warehouses and barracks. From there, the youngest and strongest men were taken to a village near Burrel, according to Del Ponte.

Eight supposed eyewitnesses described, independently of one another, similar details of a yellow house with a room on the ground floor that was used as a makeshift operating room. According to these accounts, a doctor, a Kosovar from Pec with a "noticeable hooked nose," removed the organs from up to 50 prisoners in this house. The organs were allegedly then taken to the airport in Tirana and flown to other countries, where well-to-do patients were already waiting for transplantation.

However, the sensational story, the most gruesome part of Del Ponte's memories, came to nothing. The Swiss government ordered the lawyer, who is her country's ambassador to Argentina today, not to discuss the case. Her former press secretary distanced herself from Del Ponte, claiming that she had been spreading rumors and lacked evidence.

It seemed time to visit the scene.

The village near Burrel is called Rribe, and it can only be reached via a rough gravel road. The alleged house of horrors is not just at the end of the village, but literally marks the end of civilization. Behind the building, the road ends in a steep slope covered with bushes and undergrowth. At the bottom of the slope is a riverbed, which the residents of the house seem to use as a garbage dump. Behind it is a seemingly endless landscape of hills and mountains.

Abdulla Katuci, the owner of the house, feels unwell. A horse kicked him in the back, says the 77-year-old man, as he crosses his legs into a traditional Albanian position and sits down on a carpet in the living room on the first floor. He seems appalled by the suspicions that have descended upon his house.

Using animated gestures, he describes his life. He says that he was a fanatical supporter of King Zogu, and yet later become a devoted communist soldier who wept for half an hour after Stalin's death. But a few years ago, he says -- to be precise, on Feb. 4 and 5, 2004 -- a new, terrible chapter of his wretched life began, and it hasn't ended yet.

He says that he was tending sheep in the mountains when his wife came to him and called out, in great agitation, for him to come home quickly, because the entire house was full of heavily armed policemen and foreigners. The foreigners turned out to be investigators with the UN War Crimes Tribunal, and they had brought along their experts from Kosovo. According to Katuci, an Albanian public prosecutor was also present. They were there to collect evidence of the supposed crime for Chief Prosecutor Del Ponte.

"For two days they turned our house upside down, rummaging through our clothing and collecting the garbage, even the cigarette butts," says the outraged old man. The investigators, according to Katuci, sprayed chemical substances into the rooms to find traces of blood. The family, including a one-month-old granddaughter, was forced to spend two nights outside in the cold. His entire family, says Katuci, and that of his eldest son Mersim, 48, who also lives in the house, suffered as a result of the intrusion.

The UN team concentrated, among other things, on a suspicious room on the ground floor, where a polished, black cement floor differed markedly from all the other floors in the house. The forensics experts were suspicious about the many cracks in the floor. No one, to this day, knows what is beneath that floor. The investigators had wanted to break it open, the old man recalls, but he told them: "Only if you compensate me for it." Then the men and women who, as Katuci says, were from seven countries, changed their minds and left.

The Albanian claims that it was not until April, after the publication of the Del Ponte book, that he discovered what the UN team had been looking for in his house. If he were not so poor, says this frail man, raising his index finger threateningly, he would bring an action against this woman at the European Court of Human Rights in Strasbourg. He says that a village resident must have slandered him, and if the district attorney does not bring the culprit to trial, says Katuci, he will take the law into his own hands. The story, he says, is a long way from finished.

The old man produces a letter from Albanian Prime Minister Sali Berisha, whom he begged for help. Berisha replied in early August, asking Katuci to be patient. He wrote that he had given the district attorney's office two months to respond to the accusations.

Was it all a lie? Was the story about trading in human organs nothing but a conspiracy theory from the deepest reaches of the Balkans, local factionalism among Albanians gone awry? Maybe not.

There are oddities and inconsistencies, even during this visit.

Whenever the old man has trouble explaining things, his grandchildren are quick to jump in.

There are questions Katuci cannot answer. For example, he is unable to explain the purpose of the syringes, bandages, empty infusion bottles and muscle relaxant solutions the investigators found in the riverbed.

In areas like this, which lack suitable medical care, it is perfectly normal for people to administer their own injections in emergencies, says 26-year-old Dashurie. But her explanation seems unconvincing.

And what is the source of the streaks of blood the investigators identified? A woman living in the house gave birth here, says another granddaughter. Besides, she adds, this room is used to slaughter animals on Islamic holidays. This could be true -- or not. Forensics experts had to admit that they lacked the technical ability to determine whether the blood had come from human beings or animals.

But the real proof that the Katucis are at least not telling the whole truth is obvious to any visitor. The house, which eight witnesses consistently described as yellow (in 1999 and 2000), is painted a bright white.

At first, the family claimed -- and told the UN investigators four years ago -- it had always been white. But the UN team quickly found remnants of yellow paint under the new coat of paint.

Suddenly granddaughter Dashurie "remembers" that the family had wanted to spruce up the house for a wedding in 2001 and painted the walls yellow up to about one meter off the ground. Later on, she says, they returned the house to its original color.

But even this admission is dubious. One of the UN investigators says that he has a photograph, taken in 1999, that shows the entire building painted a muted yellow.

How much can go unnoticed in a place like Rribe? At the village bar, about 400 meters (1300 feet) from the Katucis' house, hardly anyone is willing to talk about the case. A muscular man in a black T-shirt, clearly a government intelligence agent, listens to all conversations with a grim expression on his face. No, the bar owner quickly assures us, nothing unusual occurred nine years ago. It happens to be normal here, he says, to paint the houses every year. Given the poverty of village inhabitants, this too seems extremely doubtful.

In 2004, when the UN investigators wanted to have a few graves on both sides of the path to Rribe exhumed, the villagers objected. The witnesses had claimed that several victims of the organ removal scheme had been buried there under Albanian names.

Since then, the War Crimes Tribunal in The Hague has shelved the investigation. On the one hand, it lacked the mandate to investigate crimes committed after the war in Kosovo had ended. On the other hand, the evidence gathered to date was insufficient to support an indictment.

Nevertheless, the circumstantial evidence was impressive, says one of the members of the 2004 investigation today. However, he adds, the case was probably greatly exaggerated. He says that he does not believe that highly sensitive organs like hearts and livers were removed from the victims, as the tabloid press reported. Given the primitive conditions, the investigator finds it difficult to imagine anything more complex than the removal of kidneys.

The 2004 witnesses, says the investigator, seem to have "disappeared from the face of the earth." At any rate, he says, he doubts that they would be willing to make any further statements today. The men, most of them involved in the alleged crimes themselves, apparently accused former KLA leaders as well as high-ranking politicians in present-day Kosovo of having been behind the organ trade.

For this reason, says the investigator, they are afraid that "any further testimony would be a death sentence for them." Most were taken to Italy for their protection and have since disappeared.

Any remaining hopes that the events will be brought to light after all rest with Dick Marty, 63, the special investigator for the Council of Europe. He is now expected to investigate the allegations over the next two years.

The zealous former prosecutor from the Swiss canton of Ticino has already headed investigations into secret CIA flights and prisons in Europe, although in those cases his reports contained questionable evidence devoid of sources. As a result, he was accused of being a missionary for whom convictions are sometimes more important than facts. Whether Marty, given his background, will manage to find usable evidence remains to be seen.

Finding evidence could prove difficult. Neither the traces at the presumed scene of the crime nor the graves in question were ever secured.