Joachim Giehl has never experienced a trip like this before. In early June, he became one of the first German tourists to head across the Brenner Pass this summer. "It was like being in a disaster movie," says the businessman from Munich. There were hardly any other cars on the road and the rest stops were all but deserted.

Then he made a stopover in Venice. There were only locals far and wide, otherwise he and his family, who followed in a second car, had the place to themselves. "Glorious," says Giehl.

Now, he is sitting at Rimini's Grand Hotel and looking quite satisfied. Ahead of the Pentecost holiday, he talked to friends about possible holiday destinations, but many were still afraid of traveling abroad and preferred to stay in Germany. "Now everyone wants to go to Sylt," says Giehl, referring to the popular island in the North Sea. Meanwhile on the Adriatic, Giehl, his wife and their three children enjoy the miles of beach, the palm trees in the park and the hotel salons that are more than a century old. All without the crowds.

The only thing disturbing the peace and quiet in the lobby is a disinfection squad, armed with spray bottles, that briefly covers the red velvet sofas in a fine mist. That and a camera team eager to film one of the few other guests, the rock star Vasco Rossi, beloved in Italy. "Nothing exists. Everything is fantasy," is written on the wall in the Fellini Suite, where Rossi is currently staying.

That quote, from the late Italian film director Federico Fellini, who was born in Rimini 100 years ago and who often stayed in the suite himself, does a good job at describing these strange, transitional, post-pandemic, pre-season times. Indeed, the happy beach life on the Adriatic exists mainly in the thoughts and prayers of the region's hoteliers, innkeepers and public beach operators.

The Summer of the Century

Italy's borders have been open again since June 3 and the German government's blanket travel warning has been lifted as well, including for Italy, a country that was especially hard-hit by the coronavirus. Germans will once again be permitted to travel south - if they dare. But will they? That's the question people along the Adriatic coast want to know.

Normally, hundreds of thousands of people travel in early summer to Rimini, where in 1843 the counts Alessandro and Ruggero Baldini built the first wooden bathing establishment with six cabins - the "stabilimento privilegiato di bagni." Later, a spa and the Grand Hotel were added.

Subsequent generations developed the place into one of Europe's largest tourism machines, attracting millions of vacationers every year, roughly a third of whom come from abroad, mostly Germany. For years, the business model was simple: more guests, more umbrellas, more hotels.

But that no longer works. The Adriatic Sea is on the verge of the summer of the century. Not because of the weather, but because safety regulations have changed pretty much everything. Vacationers must observe social-distancing rules, avoid crowds and wear masks in hotel lobbies, with adherence to these rules more strictly monitored than in Germany. Beach parties are a thing of the past, as are the crowds of people rushing for their aperitivi. It's going to be a quiet summer.

One might expect Rimini's mayor to be at wit's end as a result, but Andrea Gnassi is in a good mood. The former club manager stands on the town hall's balcony and points to the ancient Via Flaminia. The road leads through the triumphal arch built for Augustus and extends all the way to Rome.

A Magnet for Germans

Gnassi is a scholar of history, and says that to understand how Rimini became so popular among German tourists, you have to look back to 1945. Only then can you understand how these 15 kilometers (9.3 miles) of beach, dotted with some 150,000 umbrellas at last count, came to be such an integral part of German vacation culture.

After World War II, well over 100,000 German soldiers landed in camps on the beaches of Rimini before returning home. "After a few years, many of them came back as holiday guests," Gnassi says. "And our farmers became tourism managers."

Sun and sand. For decades, Rimini worked with only that. But that old formula for success was failing even before the current pandemic, Gnassi says. It is damaging for people's health, the environment and the city, he says.

As in other countries and areas of life, the coronavirus has exposed more fundamental problems, forcing people to confront their own identities, and to rethink the future. But in Italy, for weeks, the only discussions were about the minimum distance between beach chairs. It was as if the future of the country depended on whether 10, 12, 18 or 30 square meters of space could be guaranteed per umbrella.

Gnassi found such discussions banal. Tourism is a unique industry because it does not export products, but rather imports people. That is why the industry has been hit so hard. "The coronavirus changes everything," the mayor says. "The way we travel, the way we go on vacation, the way we live together." Tourism, he says, now has two eras, like Christianity: "Before corona and after corona."

Gnassi has time on this particular day and want to show how he is changing Rimini. He hurries to the theater that was opened by Giuseppe Verdi in 1857 for rich spa guests from all over Europe. It was destroyed in the war and wasn't rebuilt until 2018. There's also the Castello Sismondo from the Renaissance, largely forgotten amid all the mass tourism. Now, it is being transformed into a Fellini museum.

"We did something that never happens in Italy: strategic planning," says the mayor. He has invested 300 million euros ($337 million) in the city's sewer system to clean up the sea. The kilometer-long coastal road is being torn up and soon it will be replaced by a long park with bike paths, palm trees, Roman ruins and outdoor fitness areas.

Visitors to Rimini this spring would have found it hard to see how all this fits together. On the one hand, there is Gnassi's vision, for which the coronavirus provided an ideal opportunity. On the other hand, there's the reality of a city paralyzed by the pandemic. Emilia-Romagna, the region in which Rimini is located, was hit almost as hard by the virus as Lombardy.

"We did something that never happens in Italy: strategic planning."

In late April, when the beach season was supposed to start, they were still closed. Only two or three hotels remained open for out-of-town police officers who were there to help enforce the strict curfews. The local police used drones to catch residents who dared defy the lockdown orders to sunbathe or swim.

Interviews with residents took place exclusively outside in order to protect against infection. One such resident was Mauro Vanni, who was tidying up his section of beach for the first time in weeks and shrieked with glee when approached by DER SPIEGEL. "At last! A German! It's like being born again!"

His section of beach is 50 meters wide and has room for 280 umbrellas. But how many will he ultimately be allowed to put out? For Vanni, only one thing seems certain: Plexiglass dividers, which were discussed as one option to protect beachgoers from infection, are a step too far. Especially in the summer heat. "That would be murder."

Patrizia Rinaldis, who runs a small hotel on the beach and manages the local hotelier association, also had her doubts. "The uncertainty is still very great. Many are afraid," she said at the time. She, too, had no idea how many holidaymakers would show up this year. Seventy percent of Rimini's economy depends on tourism.

And now? Within just a few weeks, Rimini was visited by a minor miracle. "Zero! Zero! Zero!" Rinaldis cheered in early June, referring to the number of new infections in the region. "The fear is gone." Some 15 percent of the hotels were open at the beginning of the month and most of the others were expected to follow by early July. Whether they'll fill up remains to be seen. "I would need a crystal ball," says Rinaldis. "But one thing is certain: Rimini cannot stay closed."

Mauro Vanni will be allowed to place 200 of his 280 umbrellas on the beach. He's grateful that he won't have to measure guests' temperatures, or the oxygen levels in their blood, or request and file health forms, as he feared he would back in April. The plexiglass won't be necessary, either. Children will be allowed to play in his small playground again, and even beach volleyball might start up again soon.

A few weeks ago, Vanni was worried he'd have to offer his guests games on their smartphones or tablets to prevent them from getting too close to one another. Now he's expecting a pretty normal summer. "We can finally breathe again," he says.

It's like the seaside resort has woken up from a long nightmare. Optimists like Vanni and Rinaldis are looking forward to the coming season. Tens of thousands of beach chairs have been set up. Now all they need are Germans to fill them. Then the old model would be back in business.

For Andrea Gnassi, it's not enough. He's fed up with Rimini being just another mass tourism destination. "Even if there is a vaccine: After corona, we're still all going to need more room to live." Nowadays, the mayor often gazes at the hills in the hinterlands. In his eyes, Rimini could one day be the next Tuscany. 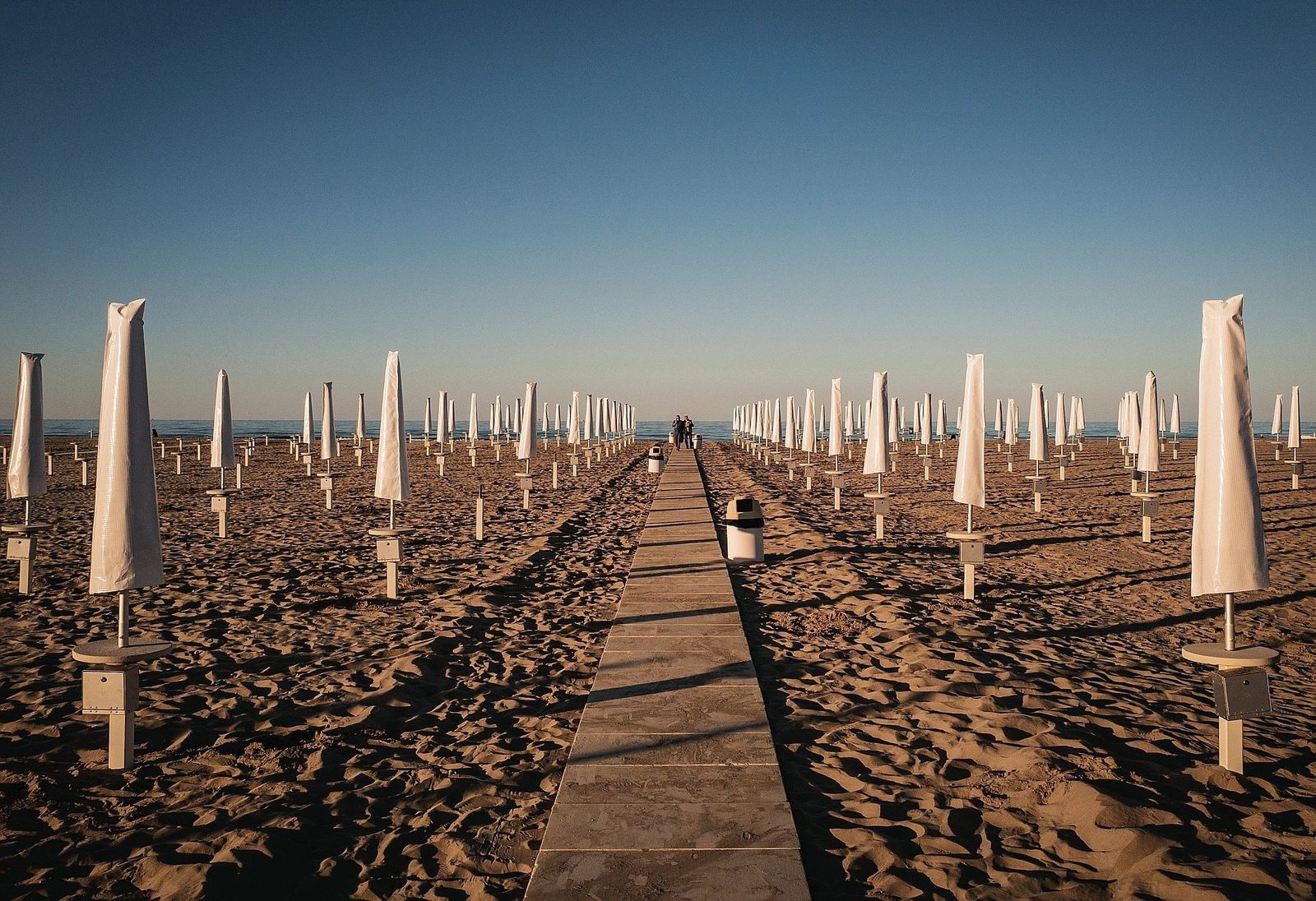 A Beach in Rimini: "It's like being born again!" 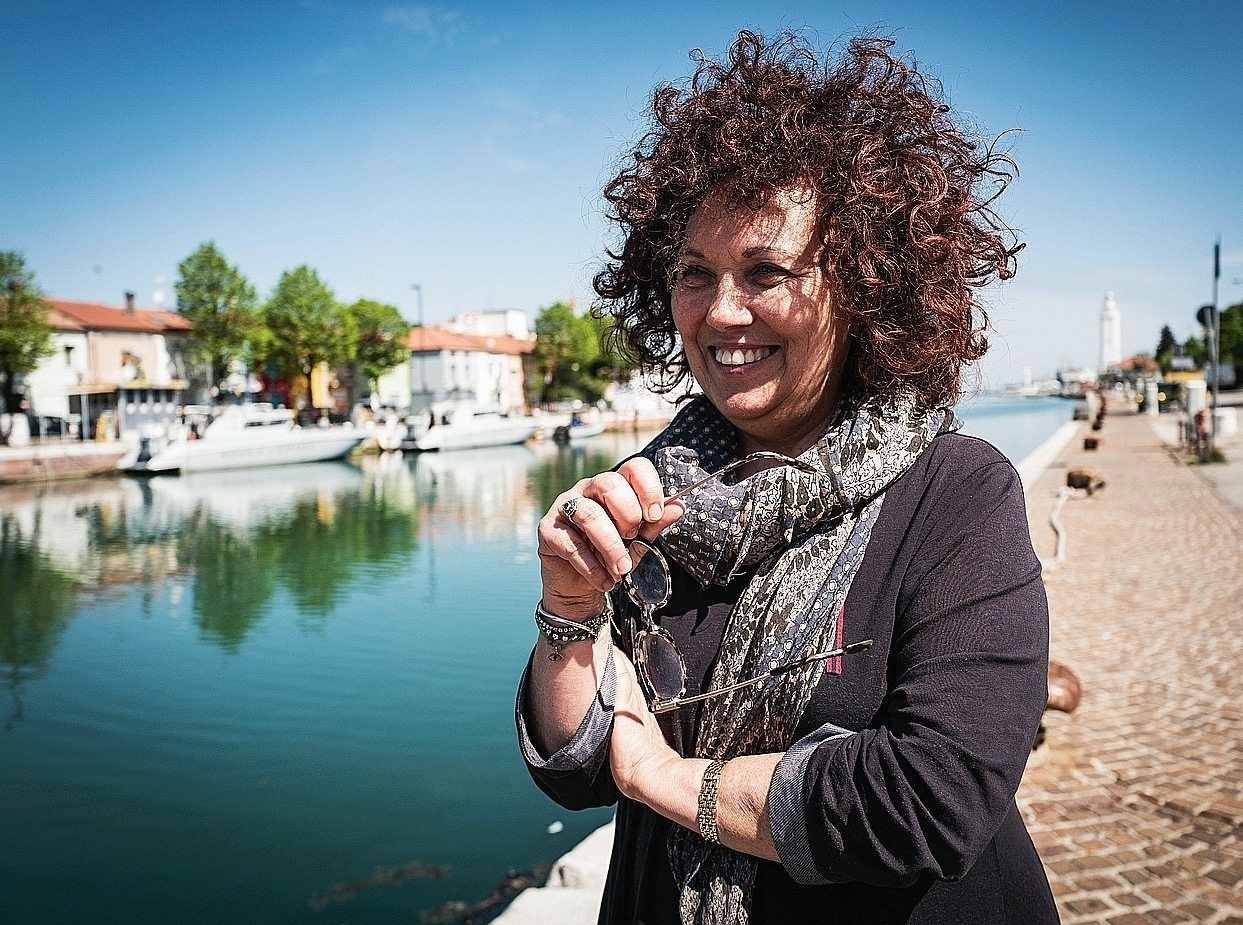