In the history of alpine passenger transportation, encrusting gondola seats with Swarovski crystals is surely not the most tasteful idea. Even in the Swiss town of Zermatt, a high-class, high-altitude tourist destination, it will remain an exception.

Of the 25 new cable cars slated to ferry people to the top of Klein Matterhorn, four will contain a total of 280,000 crystals -- a blingy reminder of the operator's intention to create a "unique installation."

The lower terminus at the Trockener Steg station lies fully 2,923 meters (9,590 feet) above sea level, with the summit station at 3,821 meters, higher even than Austria's highest mountain. Up here, the air is thin and the landscape harsh. The dusty, yellowed glacier beneath the cable car melts in the autumn sun.

The company that owns the new gondola, Zermatt Bergbahnen AG, invested 55 million Swiss francs (48 million euros) in its construction and it began operating last weekend, carrying passengers to Europe's highest mountain station. The new cableway can transport three times as many people as the existing gondola beside it.

The new people mover was built by Leitner ropeways, an industrial equipment company in South Tyrol. It functions according to the tricable principle, a state-of-the-art technique for rope-hauled transportation. The carriage rollers rest on two massive support cables while a third cable, known as the haul rope, pulls the cabin. This ensures a high degree of stability, even on windy days, and a greater carrying capacity. Twenty-five cabins with 28 seats each will be able to carry up to 2,000 people an hour to the top of Klein Matterhorn. Factor in the existing gondola and you have roughly the same capacity as a high-volume bus line.

Tricable systems of this dimension are not uncommon in the modern ski world. But it will be a first at this elevation. Hauling and installing all the heavy components within the targeted three years was an industrial and technical feat.

A helicopter loses roughly one-third of its load capacity in thin alpine air while a person, depending on their physical condition, can see their performance level dwindle by half. Furthermore, concrete cannot be mixed in the cold air at high altitudes, meaning that 7,000 cubic meters of concrete had to be pre-warmed in the valley before carrying it up the mountain, at first with helicopters and eventually with a heavy-lift aerial cableway built specifically for the purpose.

The most difficult element of all to transport, however, was the cable itself. Each of the four support cables is nearly 4 kilometers (2.5 miles) long, 5.5 centimeters thick and weighs roughly 80 tons. First, they were transported on spools by truck to Cervinia, just over the ridge to the south in Italy. But there is no machine in the world that could transport these massive drums up and over to Zermatt. So the spools were unrolled and the cables dragged northward across the Furggsattel mountain pass. Heaving them up onto the masts then took several months. Installing a facility of this size in a halfway environmentally sustainable manner is wishful thinking.

Markus Hasler is happy that the work has been completed successfully. The head of Zermatt Bergbahnen AG, he is a trained mountain rescuer and has a pleasant demeanor. He wears shorts as he sits at a conference table decorated with tiny model gondolas hanging from a string. Three-quarters of the investors are residents of the community, Hasler says, and every year he gets to disperse an 8 percent dividend to them.

But will it stay this way in the future? Hasler has two problems. The first is climate change. "2003 was a shock," he says. The hot temperatures that summer melted the glacier like an ice cream cone at the beach. Apparently 2018 wasn't as bad, primarily because of the lack of thunderstorms. Warm summer rains are the worst glacier-killers, Hasler says.

Zermatt Bergbahnen AG has begun doing what it can to counteract glacier melt and has opted for a rather industrial solution: an artificial snow factory. The machinery was designed and installed by an Israeli manufacturer and can spit out 44 cubic meters of ersatz glacier per hour.

The machine, which is about as big as a small mountain lodge, isn't exactly what ecologists would call a sustainable solution. But it's apparently effective enough that it should be sufficient for years to come. For now, Hasler says, a few weeks of continuous operation is enough to guarantee a solid base of snow.

The cable car manager's second problem is directly attributable to the success of his existing lifts: This snowy paradise is getting overcrowded. This is especially true at the lower terminus, known as Trockener Steg, where the gondolas begin their journey up to the top of Klein Matterhorn. Opened 40 years ago, the existing aerial tramway had only two large cabins. It was designed for a manageable flow of tourists and runs in a 10-minute rhythm, like the pendulum of an oversized metronome. It has a maximum capacity of 600 people per hour and direction.

Now, though, as many as 6,000 skiers descend on the facility on busy days, half of them from lower down in the valley in Zermatt looking to head up the glacier for some early morning skiing. The town is only home to 5,500 permanent residents but has 30,000 guest beds. A Wiener schnitzel costs 40 Swiss francs, a two-way gondola ride costs 100, but the crowds are large nonetheless.

The other half of the daily visitors come from the Italian side and in the evenings, they need the Matterhorn cable car to get back down south again. At times when the alpine rush hour is in full swing, waiting times can grow as long as 1.5 hours, a significant problem for one of the most expensive ski resorts in the world. Hasler notes that the prosperous tourists aren't necessarily calm and composed. "Sometimes, it's like the Wild West down there at Trockener Steg."

The strongest adversary of Zermatt Bergbahnen AG is an almost 50-year-old interest group in Bern. For years, the Swiss Foundation for Landscape Protection protested against the construction of the first Matterhorn cable car. In the end, though, Switzerland's Federal Council approved the touristic development of the glacier paradise.

"It's gotten so disgusting up there," says Raimund Rodewald, the foundation's managing director. He laments the "disenchantment of the high mountains," the "sneaker tourism" and the "French fry atmosphere" at such an otherwise serene and lonely altitude. And it's true that the summit of Klein Matterhorn is no longer picturesque. From the mountain station, a large gray tunnel carves through the rock to the ski slope. Just to the right is a sparsely furnished fast food restaurant that wouldn't be out of place on the set of a science fiction movie.

For a while, there were even plans for a colossal hotel tower to be erected at the site. The idea was for it to rise 117 meters above the Klein Matterhorn, giving the mountain the extra boost it needed to join the 4,000 meter club. The conservationists were alarmed, but the project faltered for a variety of reasons.

Rodewald didn't even bother to oppose the construction of the second cableway. His chances of success were low, he figured, since the corridor had already been developed anyway.

Instead, he has devoted himself to fighting another one of Zermatt Bergbahnen's projects: an extension to its already vast network of alpine cableways that would have immense implications for tourism. From the top of Klein Matterhorn, it's only 1.7 kilometers as the crow flies to Italy -- specifically to the summit of the Testa Grigia (see graphic).

There is already cable car service to the top of Testa Grigia from the south. Connecting that peak to Klein Matterhorn is Hasler's greatest wish. The construction permit application has already been submitted to the Federal Office of Transport in Bern, and the cable car manufacturer Leitner has planned and calculated the project. It would cost 25 million euros -- less than half of the new gondola up to Klein Matterhorn. Not even a single new mast would be necessary: They would only have to string cables from one summit station to the other.

Hasler has spent enough time dealing with throngs of tourists to be able to think far beyond Zermatt. He sees an increasing number of increasingly prosperous Asians flying in. Indeed, they already make up around 10 percent of holiday guests in Zermatt. But there could be a lot more. At the moment, it's mostly skiers and hikers who make their way to Zermatt. But if they could connect their gondola network to northern Italy's, they could forge a whole new tourist attraction A sky cruise of sorts.

Hasler has already come up with a marketing slogan: "Alpine Crossing." Cruising over this glacier paradise could become another item on the checklist of European tourist attractions: the Colosseum, the Milan Cathedral, Matterhorn and the Eiffel Tower. It's along the north-south passage that affluent tourism is really growing, Hasler says, adding: "But the flow is missing us. We need to get our foot in the door."

From the perspective of the conservationist Rodewald, such ideas are a dead end. In his plea to the Federal Office of Transport urging them to block the project, he warns of the "Disneyland-ification of the highest alpine summits." The ministry is expected to rule on the proposed construction later this year.

If approved, tourists could be traversing the Alps within two years. That's how fast these tramways can be built.

The panorama would be phenomenal. On the one side, there would be the perpetually snow-capped giants around the Dufourspitze, a mountain whose name hardly anyone knows despite being Switzerland's highest peak. On the other, the chiseled silhouette of the 4,478-meter-high Matterhorn, the most famous peak in the Alps.

For those who want to get to the top, there is still no alternative to excellent physical condition and a lack of vertigo. There was once, more than 100 years ago, a proposal to build a gondola to the top. But it was blocked by a petition from a group of conservationists.

Among them was the writer Charles Gos. "The mountains," he wrote at the time, "are the property of 3 million Swiss, not just tourists." 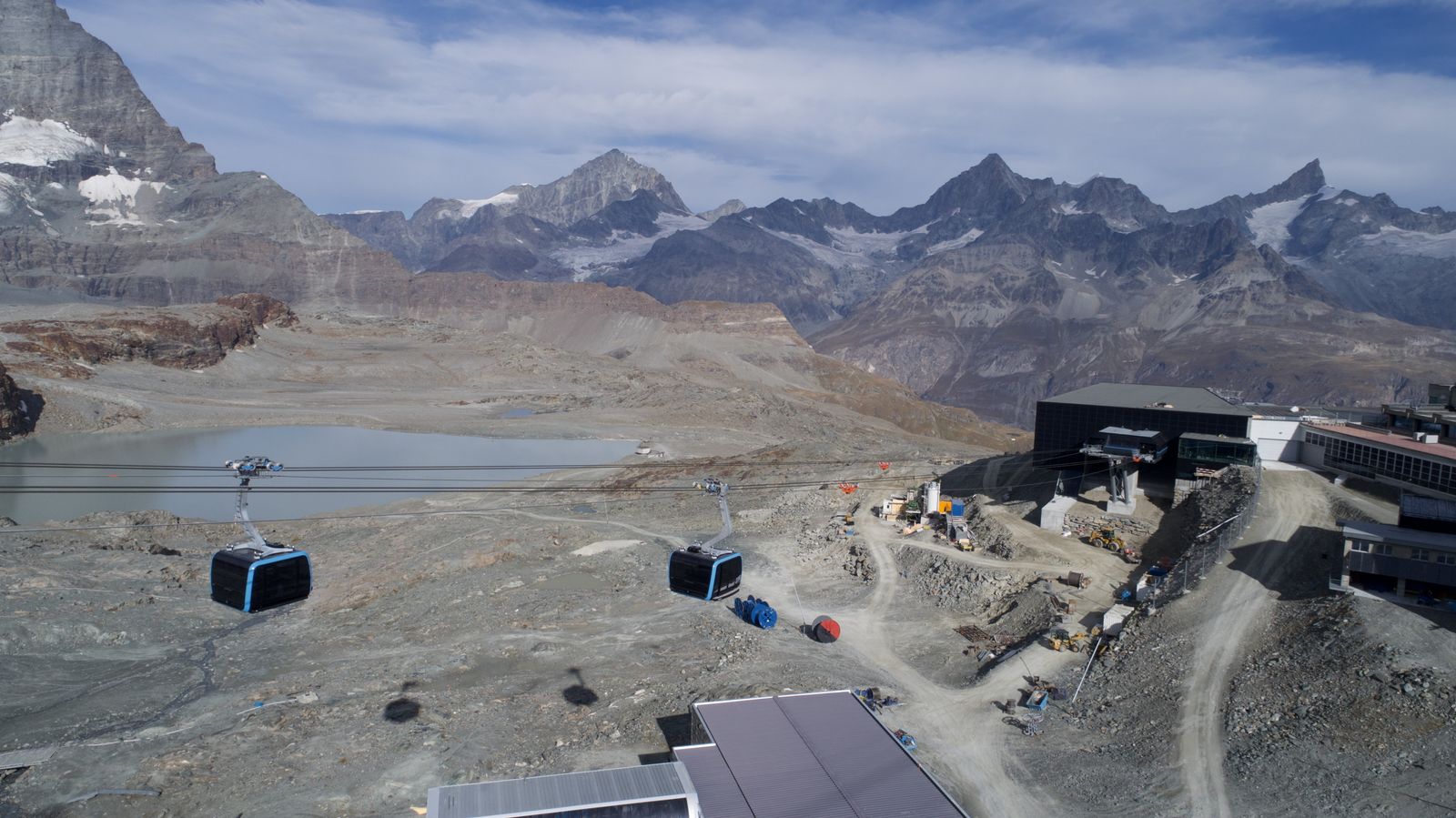 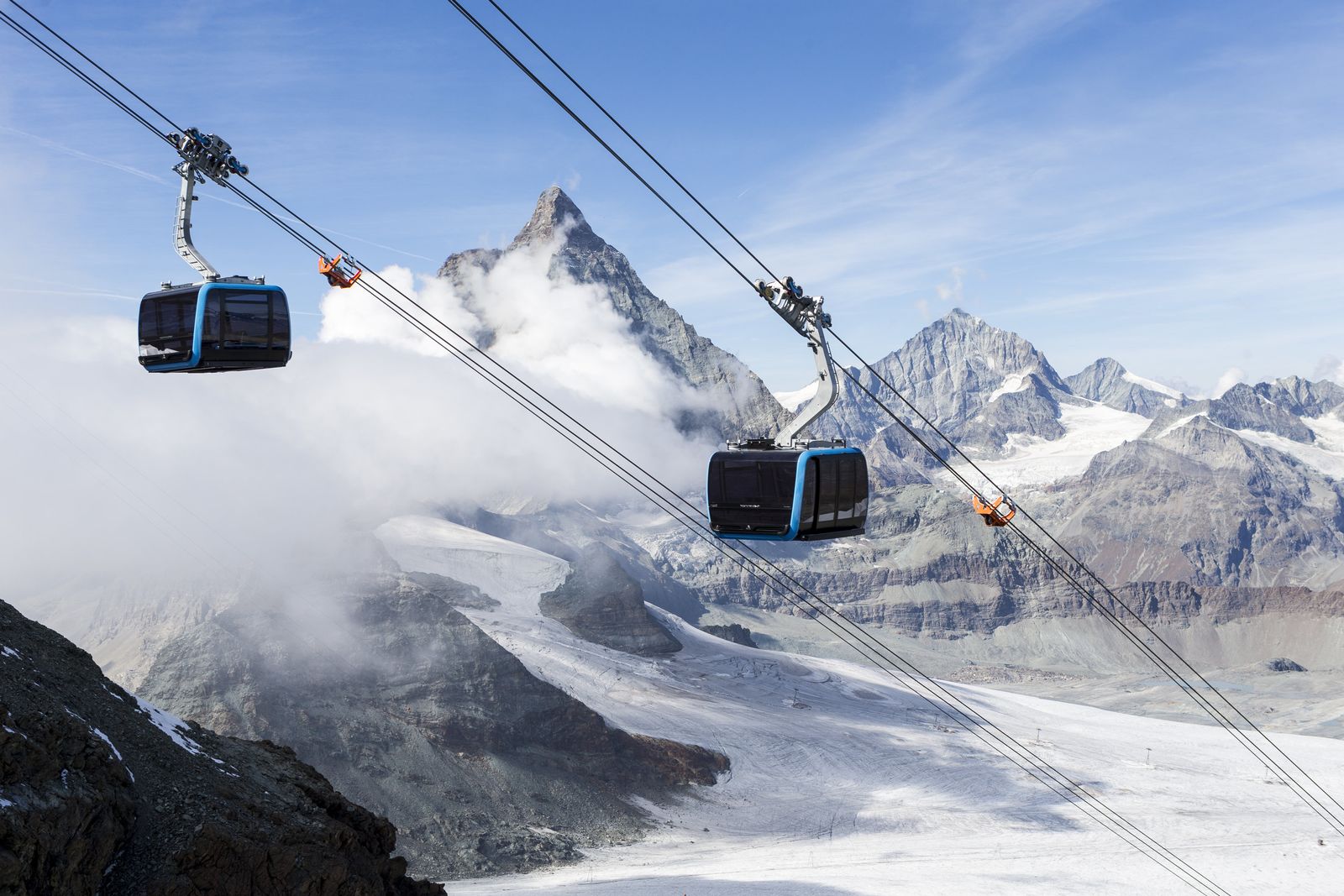 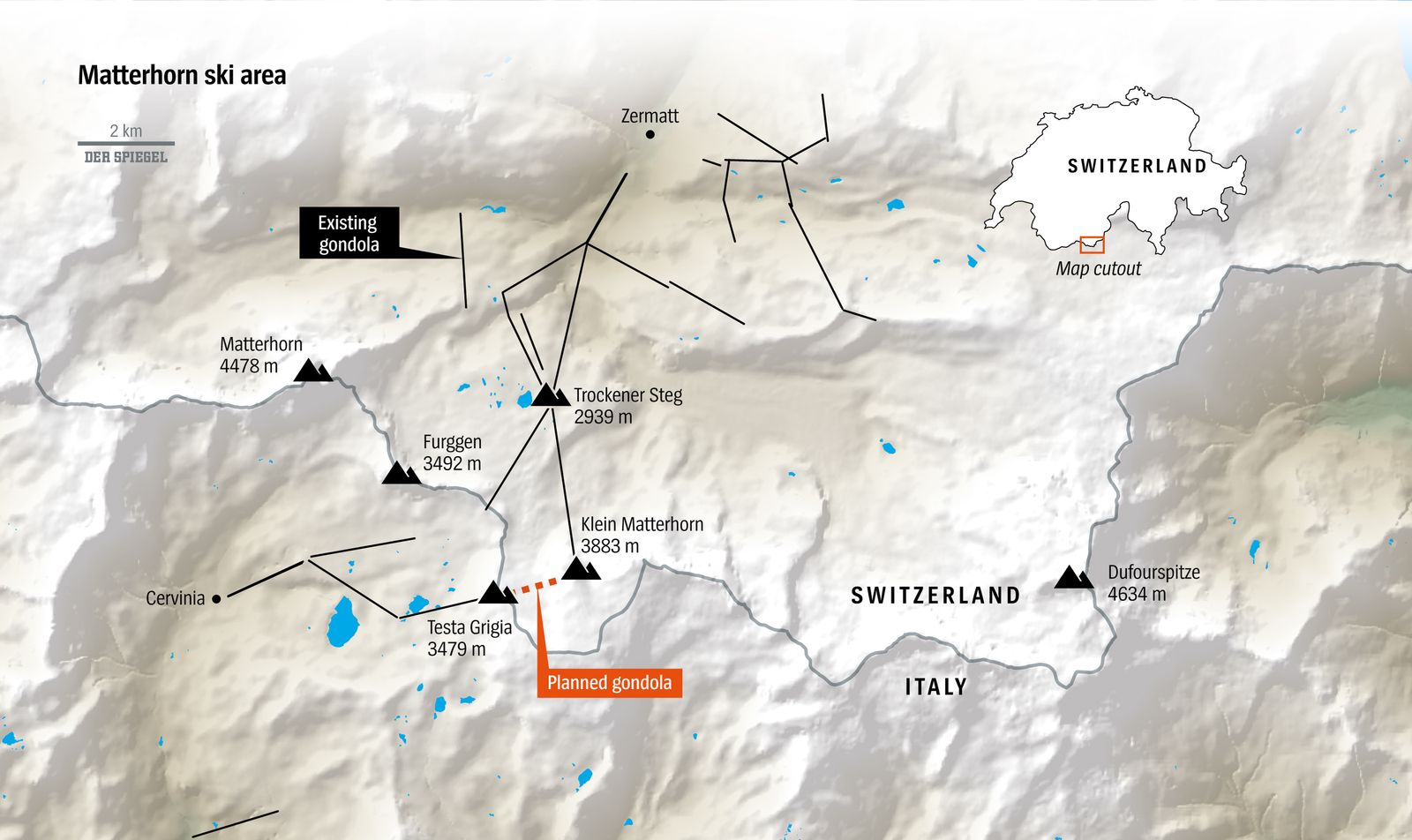 Map of the Matterhorn gondola project