Christopher Steegmans, spokesman for Chancellor Angela Merkel, decided that the best defense would be to go on the offensive. In a press conference held in Berlin on Monday, he declared that the state of the European Union's decision on whether to help Greece was "unchanged" -- lest anyone have a chance to claim the opposite beforehand. As he described it, discussions about the proposed €30 billion ($40.8 billion) rescue package for the crisis-plagued county were only about "hammering out technical details" but the time for talking about last resorts had yet to arrive. "The fact that the fire extinguisher is on the wall," he stated, "says absolutely nothing about the likelihood of its being used."

In other words: There's no reason to get excited. There's nothing to see here. Go on about your business, please.

But something about his hasty and unprompted justification elicited the feeling that something just wasn't right. Hadn't something happened? Hadn't Angela Merkel earned the moniker of "Madame Non" just a few weeks ago among EU heads of state and governments for being such a hard-nosed negotiator and blocking all moves to quickly provide the cash-strapped Greeks with some financial shots in the arm? And hasn't the conversation suddenly turned to very concrete sums running into the billions of euros that Berlin can use to give Athens a hand?

For the Federation of German Taxpayers at least, the matter is crystal clear. As its president, Karl Heinz Däke, told the business daily Handelsblatt, Germany's federal government has "buckled," and the Germany taxpayer will now "have to provide the majority of the help for Greece."

In reality, Däke is right. If worst comes to worst, Germany actually will have to contribute the lion's share of the EU's rescue package for Greece. KfW, the government-owned development bank, would have to transfer €8.4 billion into Athens' accounts, and those funds would be backed by the federal government. That, at least, is the maximum amount that Germany would have to pay based upon its share in the European Central Bank. But that figure, of course, is based on the presumption that all euro zone member states, the countries that have adopted Europe's common currency, will contribute to the aid package -- a decision that will be made individually by each country.

In fact, the hefty payment doesn't seem to match up with the hard line the chancellor has assumed with her EU colleagues. In surprisingly undiplomatic tones, her message to them has been that Germany is no longer content to play the role of Europe's paymaster. In Berlin, politicians are trying to play down the meaning of the decisions taken over the weekend, claiming that they are merely a provisional and more concrete version of the statement that emerged from the last EU summit, on March 25, when Merkel was still dictating the conditions.

A spokesman for German Finance Minister Wolfgang Schäuble, a member of Merkel's Christian Democratic Union (CDU) party, said there is "nothing automatic" about the package, which combines bilateral loans and IMF support, and that the aid has yet to be "activated". For its part, the Greek government in Athens hasn't asked for help yet, either. Nevertheless, the spokesman added, if Athens is unable to raise the needed funds on normal capital markets, it might need to do so. In that case, the European Council, which is comprised of the heads of state and government of EU countries, would still have to give its unanimous approval before aid could be provided.

Still, the hectic pace with which the EU finance ministers agreed to further measures during a videoconference crisis meeting on Sunday suggests that what is happening right now is anything but routine. After the risk premiums for Greek state bonds rose dramatically, the Euro Group appeared to realize the urgent need to act. On Friday, markets imposed a 7.4 interest rate on Greek 10-year bonds, which is well over twice the 3.1 percent that Germany must pay.

The vague pledges of aid given at the EU summit in Brussels appear to have had no effect. Unlike half of her European colleagues, Merkel calculated that markets would quickly quiet down again. But they didn't.

Back home, Merkel's political opponents are already criticizing her for her hard-line stance. The leftist Greens have called the move a "serious defeat" for the federal government. Gerhard Schick, the party's budget expert, alleges that the conservatives and their government coalition partner, the business-friendly Free Democratic Party (FDP), unsuccessfully sought to block concrete aid for Greece in the run-up to important state elections in North Rhine-Westphalia to be held in early May.

The center-left Social Democrats (SPD) have also accused the chancellor of acting too late on the issue. "Ms. Merkel, even acting in her own interests, should have shown greater European solidarity long ago," said Angelica Schwall-Düren, the deputy head of the SPD's parliamentary group.

Likewise, there was even criticism from within the FDP-CDU coalition. FDP finance expert Frank Schäffler believes that, over the long term, the plan will weaken the euro's culture of stability, and that the European finance ministers' agreement goes against what was agreed upon at the EU summit held in late March. "After several days, this agreement is no longer worth the paper it is written on," he said.

Schäffler added that he was particularly bothered by the fact that EU leaders had agreed that loans should not contain any elements resembling subsidies. But the deal apparently reached on Sunday has provisions for an interest rate of just over 5 percent, which is considerably below the dizzying 7 percent rates of late. "It clearly has the elements of being a subsidy," Angela Nahles, general secretary of the center-left Social Democratic Party (SPD), told SPIEGEL ONLINE.

All that may now change. Indeed, on Monday, the markets actually reacted positively to the news. The euro exchange rate and the stock market both soared, though they would lose some of that ground later on. And risk premiums on Greek bonds fell.

Uncertainty is still running high, and it appears the German government is no longer be ruling out the possibility that it may soon need to pull the fire extinguisher off the wall. The desired effects have occurred, Schäuble's spokesman said, and the markets have calmed down.

Then, he added tellingly, "At least this morning." 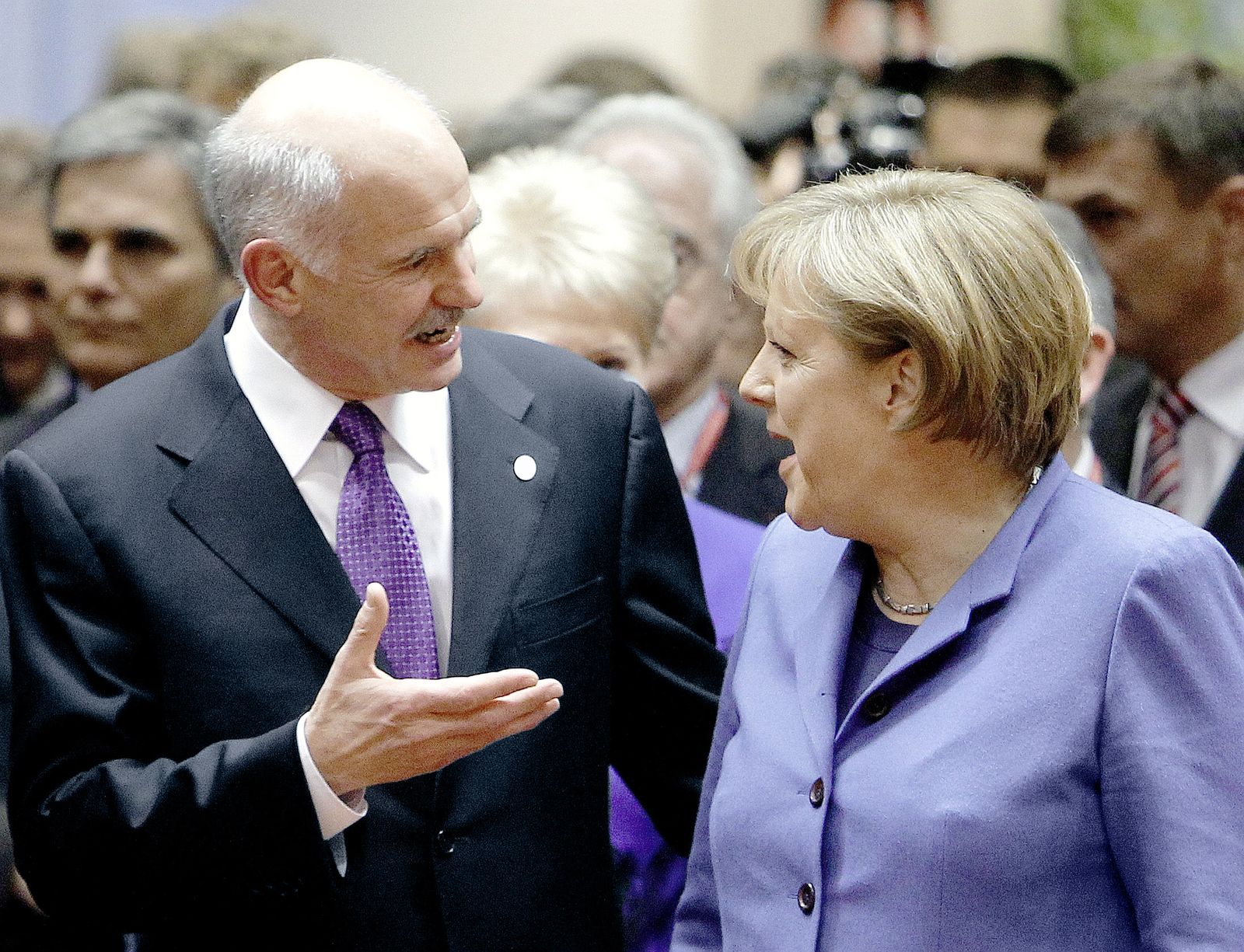