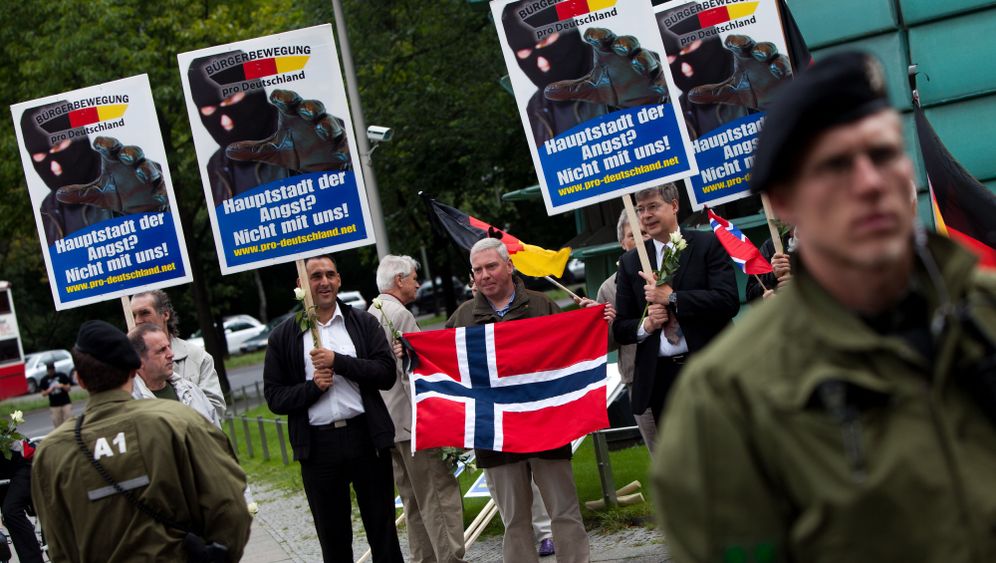 It was a somber gathering on the street out in front of the Norwegian Embassy in Berlin on Monday. Several people filed by throughout the morning to lay flowers in front of the embassy gates and Social Democrat leader Sigmar Gabriel also came to show his respect and sympathy in the wake of the Friday attacks which killed 76 people in Oslo and on the island of Utøya.

Just over a dozen of those standing in front of the embassy were holding signs: "The Capital of Fear? Not with Us!" they read, beneath the image of an ominous-looking figure wearing a black balaclava. The group belonged to the small right-wing populist group Pro-Deutschland. "Solidarity with Oslo!" the group chanted.

"When something so terrible happens in Europe, we felt that we needed to express our sympathy," Manfred Rouhs, the small party's lead candidate in upcoming Berlin city-state elections, told SPIEGEL ONLINE on Tuesday. "We also saw it as an opportunity to clearly distance ourselves from the terrible deed."

That, it would seem, has been tops on the priority list for right-wing populist groups around Europe so far this week. Muslim-skeptic, anti-immigration populist groups across Europe have rushed to condemn the attacks perpetrated by Anders Behring Breivik and to portray him as a disturbed loner. The English Defense League, for example, referred to him as a "murderous creature," the Freedom Party of Austria called it a "psychopathic crime."

There is little reason to doubt their sincerity. While distasteful to many for their strident anti-Muslim posturing and sharply polarizing rhetoric on immigration and immigrants, European right-wing populist parties do not as a rule encourage violence -- and Breivik, as even his own lawyer said on Tuesday, is almost certainly a deeply disturbed individual.

And yet, much as Muslims in Europe and the US are viewed with suspicion in the wake of every Islamist attack perpetrated in the West -- particularly, it must be said, by right-wing populist rhetoricians -- Breivik has now made it difficult for the anti-Islam right wing to avoid the spotlight which has now been trained upon them.

After all, much of the 1,518-page treatise he published concurrently with his attacks could easily have come from the populist platform: The concept of "Islamic demographic warfare," concerns about "mass immigration," and worries about the downfall of the "Christian West" are all issues which have become key elements of populist stump speeches. Furthermore, Breivik expresses admiration for several right-wing leaders, Geert Wilders of the Netherlands and Filip Dewinter of Belgium among them.

Freedom Party of Austria (FPÖ) leader Heinz-Christian Strache stated his message concisely during an early July interview with SPIEGEL ONLINE. "Not every Muslim is a terrorist," he said. "But every terrorist in the last decade was a Muslim. That is the fundamental problem."

That this is no longer the case has now become a fundamental problem for Strache and his ideological companions.

One can, of course, question whether or not Breivik's horrific shooting spree and bomb attack was indeed a terrorist attack. Despite the cold, analytical tone of his tome, its sheer size and rambling breadth bear witness to a psyche that would seem not to be entirely stable. The difference to a school shooting would appear to be one of magnitude.

Yet Breivik himself clearly saw his massacre as a political act, as the logical conclusion of the ideology he adhered to. His choice of targets also indicates that he was operating within the political worldview he created for himself: the government quarter is the center of political power in Norway and the summer camp was run for the youth wing of the center-left Labor Party, which Breivik blamed for what he saw as excessive Muslim immigration in Norway.

As one contributor wrote on Jihad Watch, a website run by well-known Islam-critic Robert Spencer: "Breivik's atrocious crime did an incredible disservice to legitimate debate concerning Muslim immigration, a debate that could now be marginalized."

Europe's right-wing populists, it has become apparent this week, are not used to being on the defensive. For years, they have seen public support for their causes grow and are in parliament in several countries. Furthermore, as integration and demographics have risen to the top of worry lists in several countries on the Continent, the populists saw little reason to tone down their attacks.

'We Thought It Was Al-Qaida'

Now, though, they are eager to avoid the kind of net of general suspicion much of their rhetoric has cast over Islam. And so far, they have largely chosen to sidestep questions about the ideological origins of Breivik's crime. "We strongly condemn the attack," David Lasar from the FPÖ told SPIEGEL ONLINE on Tuesday. "But the leftists cannot be allowed to (use the attacks to) score political points."

Rouhs from Pro-Deutschland identified a different culprit for the sudden attention. "The problem is that we have a biased media eager to make such a connection," he said. "I think that is absurd."

Rouhs also said that Pro-Deutschland made the decision to hold a vigil in front of the Norwegian Embassy on Friday evening before it became clear who the perpetrator was. "Like everyone, we thought it was an organized group like al-Qaida," he said.

Had that turned out to have been correct, the figure on their signs on Monday, one is tempted to assume, would likely have been wearing a burka rather than a balaclava.