Six years ago, Paul Erik Wedelgaard decided it was high time to set a new course for his future, even though he was already 70 at the time. The sun, the cold and the sea have carved deep furrows into his face. His wooden fishing cutter, the "Kyholm," is plowing southward through the Baltic Sea, to the place where the symbols of this future -- wind turbines -- stand off the coast of Samso.

Even today, Wedelgaard is almost as agile on deck as he was at 14, when he began fishing. But his catch of cod has declined sharply in recent years, and the small salmon farm he was operating with a partner wasn't sufficiently profitable. And then along came those young men who had decided to start something of a revolution -- on Samso, of all places. They had ideas, and they had an ambitious plan. 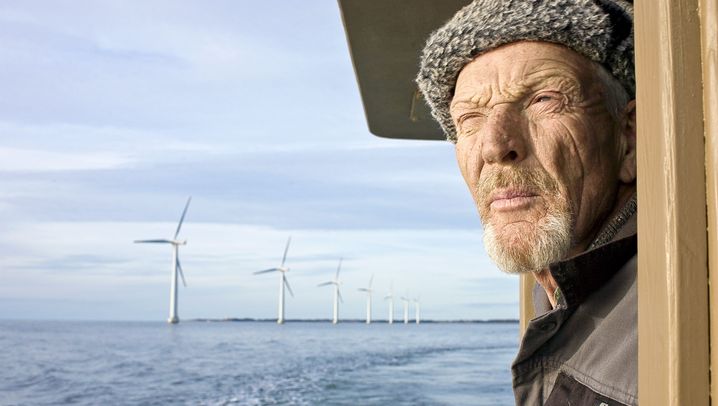 They were concerned about the world and the climate. Most of all, however, they were interested in Samso and all the money they hoped could be made there. For people like Wedelgaard, it seemed like a relatively safe bet.

Part of their plan included erecting 10 giant wind turbines in the Paludan flats, at a cost of 24 million kroner, or about €3 million ($4.4 million), each. The machines were to be owned by the Samsingers, as the island's residents are called.

'We Have to Do Something for the Children'

Wedelgaard knew, of course, that the Paludan flats are located in a particularly windy area. It could work, he thought to himself. He sold his half of the salmon farm, took out a bank loan and invested 3.5 million kroner in one of the turbines, unit No. 6. Wedelgaard will have recouped his investment in four years. "We have to do something for the children," he says. He is referring to his four children and the others on the island.

Samso is a laboratory where the Danish government launched a social and technological experiment 12 years ago. Before that, heating oil was brought to the island by ship and electricity, mainly from coal-burning power plants, was transmitted through cables. For each Samsinger, 11 tons of the greenhouse gas carbon dioxide were pumped into the atmosphere each year. The goal was to reduce those 11 tons to zero within 10 years, without special subsidies.

The Samsingers joined forces, erecting the wind turbines and attaching solar panels to their roofs. They built central straw burners, and they installed machines to harness geothermal energy and the heat from cow's milk to heat houses, and to extract rapeseed oil from plants grown on the island to produce fuel for their tractors.

Eight years later, they were already producing more energy than they consumed, which made them climate-neutral, and today they produce 40 percent more energy than they consume. Only two questions remain. Can the approach used on the island, which comprises 22 villages, 4,000 residents and a small cannery, work elsewhere? And does the rest of the world even want to emulate the Samsingers?

These are the sorts of questions that will be asked on Dec. 7, when politicians from around the world gather in Copenhagen for the United Nations Climate Change Conference. Their goal is to prevent worldwide temperatures from rising by more than 2 degrees Celsius (3.6 degrees Fahrenheit). This is only achievable if emissions of carbon dioxide and the consumption of coal, oil and gas are drastically reduced. Experts are already at odds over just how drastically.

"It's important to negotiate, but then they have to go home and do something," says the man who organized the small miracle on Samso Island. "We don't wake up every morning thinking about how we're going to save the polar bears. No, people think about themselves." But this isn't a problem for Soren Hermansen; it's the solution.

Hermansen has become a guru of sorts for climate experts and politicians. Last fall, his name appeared on the cover of Time, together with the names of other "Heroes of the Environment." The cover image featured circles of different sizes to indicate the relative importance of each name. Hermansen's circle was about four times the size of that of Arnold Schwarzenegger, the governor of California.

It isn't easy catching Hermansen on his island. He spends a lot of time flying around the world. He has just returned from Copenhagen, where he appeared before the Danish parliament, and before that he was in Japan, Korea, Italy and Brussels. José Barroso, the head of the European Commission, was at the Brussels meeting, where the Russian energy minister quarreled with his Ukrainian counterpart on the sidelines. And Hermansen, a former farmer from the village of Kolby Kaas on Samso, sharply criticized them for not making a sufficiently serious attempt to do what his fellow islanders have accomplished.

Hermansen, 50, his short hair slightly graying, has the physique of an athlete and is quick to flash his big smile. Now he is sitting in a building that, with its shiny metal skin, looks a little like the Starship Enterprise -- in the middle of a rural village. Hermansen plays the role of Captain Kirk, as director of this "energy academy" in Ballen, an old fishing village. Visitors from around the world come to Ballen to examine the equipment the Samsingers use and the infrastructure they have developed. Of course, the building itself is also a model, with its solar panels and a computer that occasionally opens and closes ventilation flaps in the roof.

Hermansen describes how the Samso concept works. In 1997, the Danish Energy Ministry announced a contest. A region was to be selected to test how effective renewable energy can be in a real environment. It was a clever contest, requiring the winning region to achieve a carbon footprint of zero with existing technology and without special assistance or subsidies from Copenhagen. This would make the results more readily transferable to other places, and the whole project wouldn't cost the government a single kroner.

An engineer in the city of Aarhus, across the water from Samso, hit upon the idea to write a plan for Samso. He analyzed how much electricity and oil the Samsingers consumed, how much biomass grows there each year, how strong the wind blows and how long the sun shines. Then he wrote his plan -- and won the contest.

Samso was dubbed an "eco-energy island," a title not unlike a brass medal -- well-intentioned, but almost worthless. It helped in obtaining the necessary permits for the new equipment, but the Samsingers themselves had little use for the designation at first. When TV reporters came to the island to interview the mayor, he was at a loss for words and had to consult the concept before answering their questions.

The engineer advised a few people on Samso to establish an association, or else, he said, the plan would never materialize. Fifty Samsingers attended the first meeting in Tranebjerg. But the island's remaining 3,950 stayed home. They were simply unable to see the engineer's concept as a profitable enterprise.

'Everyone Can Do What We Are Doing'

Hermansen saw it right away. He had already had a wind turbine installed on his father's farm in 1984. He is a good talker, and he loves to persuade people. Pumpkins make poor conversationalists, which was reason enough for Hermansen not to spend his life working as a farmer. He was looking for a project, and this was it. The 50 islanders at the Tranebjerg meeting quickly agreed that Hermansen was to be their representative.

He went from house to house to promote the plan, drinking vast amounts of coffee in the process. Then he bought a cider press. Almost everyone on Samso has apple trees, he reasoned, and offering them fresh apple juice was the perfect way to get them to listen to his pitch and calmly discuss the project. "The question was: How can we all continue living on Samso? In the year before, the slaughterhouse had closed down, putting hundreds out of work. It was our Great Depression," he recalls. The plan is better than the slaughterhouse, he said, and soon his argument began having the desired effect.

Three heating plants were built between villages in the southern part of the island, and pipes were laid into the houses. Now the farmers bring the straw that they used to burn in the fields to the plant, where it is burned to generate heat. The farmers are paid for their hay, building the three plants created short-term construction jobs, the villagers are saving money -- and their money stays on the island.

'Everything Has to Belong to the People'

They also built a solar heating plant on the northern part of the island, as well as the wind turbines. Eleven were to be built on land and 10 on the Paludan flats. Big companies were not to be permitted to own any of the windmills, says Hermansen. That was his most important selling point, he says. "You can't do anything from top to bottom. Everything has to belong to the people. It has to become their project."

One of the first islanders to understand the concept was Jörgen Tranberg, a man with an angular head and bushy eyebrows. He owns 150 black-and-white Holstein cattle, which makes him a major dairy farmer on Samso. He is a smart man. His cows crowd onto two ramps to his left and right, as the milking machines click uniformly. He earns less than 22 cents per liter, he says -- in other words, not much.

He built a turbine on the hill behind his silage tank and invested in half of Turbine No. 8 on the Paludan flats. The community now owns five of the offshore generators, using part of the proceeds to fund the Energy Academy. About 400 Samsingers own the remaining offshore wind turbines and the turbines on land, of which Tranberg owns a very large share. "I think the weather here is always good," he says. "When the wind blows, the rotors turn. When it rains, the feed for my cows grows. And when the sun shines, I take my boat out for a spin." He laughs and calls his dog Vaks. Vaks means shrewd in Danish.

The wind turbines provide Tranberg with about €3,000 in gross daily revenues, while his cows earn only about €1,000 a day -- and have to be milked twice.

Even the cows do their part to save the world's climate, and they contribute to Tranberg's bottom line in more ways than one. A cow's body temperature is 38.5 degrees Celsius (101.3 degrees Fahrenheit), and the milk has to be cooled down to 3 degrees Celsius. Tranberg, like other farmers, has installed a heat exchanger near the milk tank. The device is as large and angular as a refrigerator, and it even works like one: It cools the milk, releasing heat that is used to heat the house. The wind turbine provides the electricity to run the heat exchanger.

The only remaining net emitters of carbon dioxide are Tranberg's and the other island residents' cars. The ferry to the mainland consumes 9,000 liters of diesel fuel a day. Nevertheless, Samso's overall energy production is still CO2-free, because the island exports more electricity than it imports oil.

But Hermansen isn't finished yet. Automakers Citroën, Peugeot and Mitsubishi plan to start building electric cars next year. Hermansen is negotiating with the electric utility DONG Energy and the wind turbine manufacturer Vestas. He envisions a technology that would allow electric cars to be connected to the generators, and would include computers that charge the cars' batteries when the wind is blowing and tap electricity when it is not.

"We are completely normal people here. Everyone can do what we are doing," says Hermansen. But then he adds: "In the countryside, that is. Cities are a problem."

The Egyptian ambassador visited the island some time ago. After touring the facilities, he said that the number of people living on Samso could fit into three apartment buildings in Cairo -- buildings with no abundant source of cheap straw nearby and not surrounded by the sea.