Compared with the Social Democratic Party's chancellor candidate Peer Steinbrück, the conservatives have sailed through the election campaign with relatively few problems. The closest the Christian Democratic Union (CDU) came to a real snafu was when Finance Minister Wolfgang Schäuble admitted in August for the first time that Greece would require further financial aid.

The admission immediately gave rise to the question of where this money is supposed to come from given that the German government has already categorically rejected the possibility of another debt haircut for Athens. The governor of the state of Hesse, Volker Bouffier, likewise a member of the CDU, offered an answer shortly after Schäuble's appearance, suggesting that the maturity on loans to Greece could be extended and interest rates lowered.

At first glance, reducing interest rates appears to be a reasonable idea. The Greeks would be given more time and room to maneuver and donor countries like Germany wouldn't lose any of the money they lent to Athens. But if you take a closer look, it's not such a great deal. A lowering of interest rates wouldn't have a major influence on Greece and it could also prove costly for creditors, just as a haircut would be. The problem is that interest rates are already so low that only certain elements could be reduced at all.

At best, a reduction of interest rates could save Greece a few hundred million euros a year -- far too little to cover the country's anticipated budget shortfalls. The International Monetary Fund (IMF) is estimating a total of €11 billion in financing shortfalls during the next two years.

How Much Money Are We Talking About?

So far, Greece has received two large bailout packages. The first aid package included €110 billion, and was first agreed to by the euro-zone member states and the IMF in 2010 (see table). Back then, the permanent euro bailout fund had not yet been established, so €80 billion of the loans provided at the time came from the individual euro-zone countries. But only €53 billion of these loans were actually paid out to Greece.

Bailout Packages to Greece So Far

The remaining €24 billion was then pumped into the second bailout package, which was agreed to in 2012 and had a total value of €164 billion. By then, the euro zone had created the first euro backstop, the European Financial Stability Facility (EFSF), through which the loans were disbursed. If you subtract the IMF's share of the fund, the sum of the loans provided by euro-zone states is €145 billion, of which €133 billion has already been disbursed to Athens.

How High Are Interest Rates Now?

In terms of interest rate levels, the differences between the two bailout packages are significant. The interest rate on the bilateral loans are based on the three-month rate of the Euribor benchmark rate, which is currently at a level of around 0.2 percent. In addition, Greece was charged an initial premium of 3 percent. Despite this already low premium, the euro-zone states repeatedly eased the conditions and it is now only at 0.5 percent. So currently, Greece is paying interest of about 0.7 percent.

Conditions imposed by the EFSF apply to the second bailout package. The backstop fund and its permanent successor, the European Stability Mechanism (ESM), do not disclose the exact interest rates applied to the loans they grant. According to information obtained by SPIEGEL ONLINE, the rate for Greece, as well as Ireland and Portugal, is currently under 2 percent.

At the moment, however, the interest rate doesn't really mean anything for Greece, anyway. At the end of 2010, a further easing of its burden was agreed to, and interest on the second aid package has been deferred for 10 years. A so-called guarantee fee of 0.1 percent that other euro bailout recipients are still being forced to pay was also reduced to zero.

The CDU's Bouffier has proposed extending the terms of Greece's loans by 10 years. By being given an extension on the repayment of its aid loans, Greece would be given more time to get back on its feet. But this wouldn't eliminate short-term financing problems like the current €11 billion shortfall that is expected.

Besides, the loans provided are already very long-term loans. The first aid package was a 30-year loan. Initially, the EFSF loans had a maturity of 15 years. But at the end of 2012, those terms were doubled and the German Finance Ministry says, on average, they will expire in 32.5 years. Even under the most pessimistic estimates, this should actually already provide Greece with sufficient time for a recovery. Prime Minister Antonis Samaris himself believes that six years should suffice.

What Effect Would Lowered Interest Rates Have?

As past experience has already shown, a lowering of the interest rate would be more effective than extending the loans. When the euro-zone countries reduced the interest rate for loans to Greece by one percentage point in the rescue package at the end of 2010, Athens was able to save a half a billion euros a year. The elimination of the guarantee fee at the same time will also save Greece €2.7 billion over the entire term of the loans.

But interest rates have already been lowered several times. And Athens is currently paying no interest whatsoever on the second bailout package, which comprises the lion's share of overall aid to Greece.

That leaves the €53 billion in bilateral loans from the euro-zone countries. The interest rate of approximately 0.7 percent that has been applied on those loans is already so low that it falls significantly below the current inflation rate. If the other euro-zone countries were to eliminate this interest rate entirely, Greece would save only about €370 million a year -- nowhere close to filling its budget hole.

Another lowering of the interest rate would also increase risks for Greece's creditors. So far, the loans provided in the first bailout package were a money-making business for Germany, and around €320 million flowed into the German government's budget from this source between 2010 and 2012. In the meantime, however, those interest payments have been reduced several times and then deferred altogether in the second bailout package.

In addition, there's another phenomenon on the debt crisis from which Germany has profited. As they search for a safe economic harbor, investors have been lending money to Germany essentially for free, which has enabled Berlin to pass those loans on to other countries very cheaply. It now appears, however, that this cycle of low interest rates is ending and that Germany will have to start paying higher rates. The situation is even more difficult for the other euro-zone countries that already must pay higher interest rates than Germany.

Interest rates for Greece could either be reduced or the period of payment extended, but the first step would do little to mitigate Greece's current budget shortfall problem, and significant costs could be associated with the latter. Politicians might be willing to hazard that risk given that rescuing Greece is a political goal for which the euro-zone countries have so far only provided guarantees and not had to actually pay any cash. But the more honest and likely more effective alternative to lowering interest rates would be a debt haircut. Then, what Peer Steinbrück predicted in a SPIEGEL interview in 2011 would come true: "Of course the Germans have to pay."

It appears that Angela Merkel's government also has at best limited faith in changing the interest rate or extending the terms of the loans. Priska Hinz, the budget policy spokeswoman for the Green Party in parliament, recently submitted an inquiry to the Finance Ministry regarding the exact cash value of the measures adopted at the end of 2012 to ease Greece's burden. The answer: Such information would "only be possible with numerous assumptions and hypotheses."

And what does Hesse Governor Bouffier, who himself issued the latest proposal to reduce interest rates, have to say? Asked for a response by SPIEGEL ONLINE, his spokesman merely pointed to the sparse statements he made on the subject in an interview around three weeks ago. "Governor Volker Bouffier doesn't want to speculate on any further details." 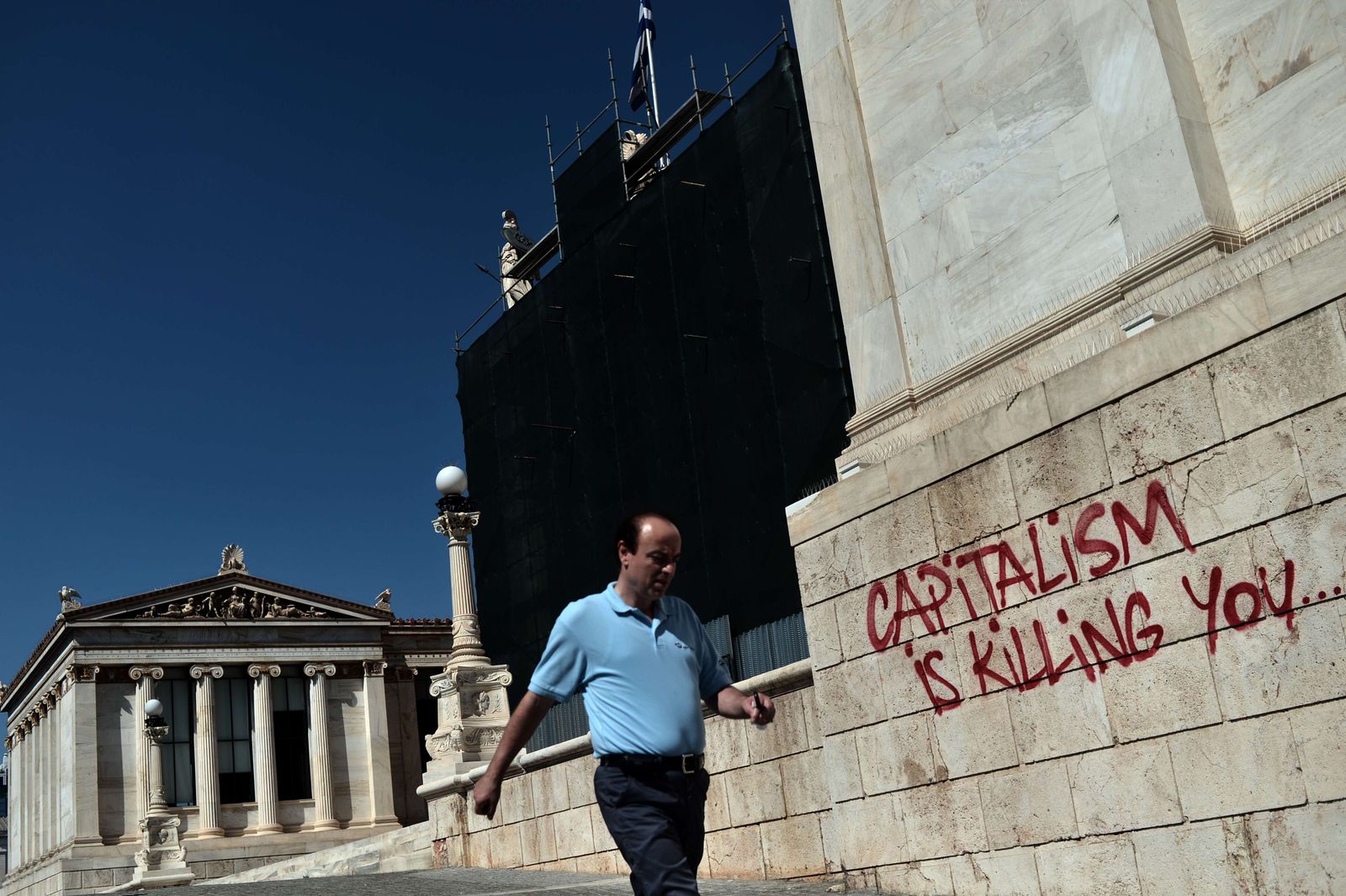 Graffiti in Athens: The Greek government is expected to have a budget shortfall of 11 billion over the next two years.