Germany and France on Wednesday criticized British Prime Minister David Cameron's demands to claw back powers from the European Union and said his plan to hold an "in or out" referendum was dangerous for Britain.

German Foreign Minister Guido Westerwelle said Britain cannot expect just to pick and choose the aspects of membership that it likes. "Germany wants the United Kingdom to remain an active and constructive part of the European Union... But cherry picking is not an option," Westerwelle told reporters.

"Europe isn't the sum of national interests but a community with a common fate in difficult times."

French Foreign Minister Laurent Fabius said: "If Britain wants to leave Europe we will roll out the red carpet for you." The tongue-in-cheek remark echoed Cameron himself, who once used the same words to invite rich Frenchmen alienated by high taxes to move to Britain.

A referendum would be "dangerous for Britain itself," said Fabius. Responding to Cameron's plan to renegotiate relations between the EU and Britain, he said Europe was like a football club. "You join the club but when you're in it you can't say: 'I'm going to play rugby now.'"

'It Is Time to Settle This Question About Britain And Europe'

Cameron promised on Wednesday to give Britons a straight referendum choice on whether to stay in the European Union or leave, provided he wins an election in 2015. He said the vote could take place sometime between 2015 and the end of 2017, and shrugged off warnings that this could damage Britain's economic prospects and alienate its allies.

"It is time for the British people to have their say. It is time for us to settle this question about Britain and Europe," Cameron said, adding that his Conservative Party would campaign for the 2015 general election promising to renegotiate Britain's EU membership.

"When we have negotiated that new settlement, we will give the British people a referendum with a very simple in or out choice to stay in the European Union on these new terms; or come out altogether. It will be an in-out referendum."

His keynote speech had been announced for months but repeatedly postponed. He had wanted to hold it last Friday in Amsterdam, in the spirit of former Prime Minister Margaret Thatcher who chose the Belgian city of Bruges for a 1988 speech in which she lambasted what she called "a European superstate exercising a new dominance from Brussels."

But Cameron cancelled the trip because of the Algerian hostage crisis. In the end, he decided to eschew the European mainland and address journalists in London instead, at the UK headquarters of financial news agency Bloomberg.

That location wasn't without a certain symbolism either -- after all, Bloomberg is an institution from the world of finance, and Cameron often cites the need to defend Britain's financial sector and the City of London as the reason for his rebellion against Brussels.

In the most important speech of his career, he pledged to negotiate a "better deal" for Britain by bringing powers back from Brussels.

The head of the Conservative Party is playing a maximum risk game. Britain last held a referendum on membership of what was then called the European Economic Community in 1975, and no prime minister since has dared to repeat a plebiscite. No one wanted to risk Britain leaving.

Cameron's plan for a looser version of full British EU membership is based on two extremely shaky assumptions. Firstly, it depends on the EU making a treaty change in the coming months -- only then could he push through further opt-outs from the common rules. And secondly, the EU partners would have to agree to his wishes.

Both seem unlikely. The other governments don't want to reopen the 2009 Lisbon Treaty that reformed the EU's institutions. After all, it took many years to negotiate it -- and if a country demands further exceptions, the arduous discussions will have to start afresh. As a result of that reluctance, the changes to the architecture of the single currency in response to the euro crisis have so far been made without altering the treaty.

In addition, many EU leaders don't trust Cameron. They suspect his initiative stems from the age-old desire of Britain's Conservatives to weaken the EU and reduce its purpose to that of running the single market. Wednesday's reactions in Berlin, Paris and Brussels suggest he may not get what he wants.

But Cameron won't let such warnings stop him. He said his experience in dealing with the EU was that you could secure concessions if you push hard enough.

But he didn't answer the decisive question: What powers does he want to claw back? Britain isn't a member of the euro zone or the Schengen area of passport-free travel. It secured an additional opt-out on justice issues in the Lisbon Treaty.

No 'Return Ticket' for Britain

In his speech, Cameron didn't provide details of his proposed "new settlement" beyond mentioning some basic principles for a reform of the EU: an expansion of the single market, more flexible structures, less bureaucracy and a review of the EU's responsiblities. He evidently doesn't want to narrow his scope for negotiations. He doesn't want to pin himself down by making demands that he won't be able to push through. But in recent weeks he has hinted he wants to cut social benefits paid to foreign EU nationals in Britain and to cancel the EU guideline on working hours.

After he had finished the speech, the British journalists gathered in the room wanted above all to know what he would do if the EU partners refused his demands. Would he then campaign for a British exit from the EU?

Cameron evaded the question, saying: "I would argue, 'who goes into a negotiation expecting and hoping to fail'?" But he left no doubt that he sees Britain's place in the EU. "I'm not a British isolationist," he said. Of course Britain, like any other country, could seek its own way in the world. "But is that really the best future for our country?"

Cameron, like all his predecessors, doesn't want to enter the history books as the prime minister who led his country out of the EU. He warned that there wasn't a "return ticket" if Britain left the EU.

Cameron is banking on other governments helping him to convince the British. He is seeking support from traditional allies like Germany, the Netherlands and the Scandinavian countries. He is looking to Chancellor Angela Merkel in particular -- he referred to her several times in his speech.

It's unknown what Merkel has offered Cameron in their face-to-face meetings. But Germany's official reaction has been cool. Germany wants Britain in the EU, say government officials in Berlin -- but not at any price. It's up to the British to decide whether they can live with common rules. Germany, they say, won't be blackmailed.

Even though Britain's EU partners are opposed to a British referendum, the prospect of the vote will have the benefit of mobilizing pro-European voices that have been been drowned out by the euroskeptics in recent years.

The debate surrounding Cameron's speech has already had an noticeable impact on public opinion. Surveys suggest that given the choice between the status quo and an uncertain future outside the EU, the British may opt to stick with the devil they know. 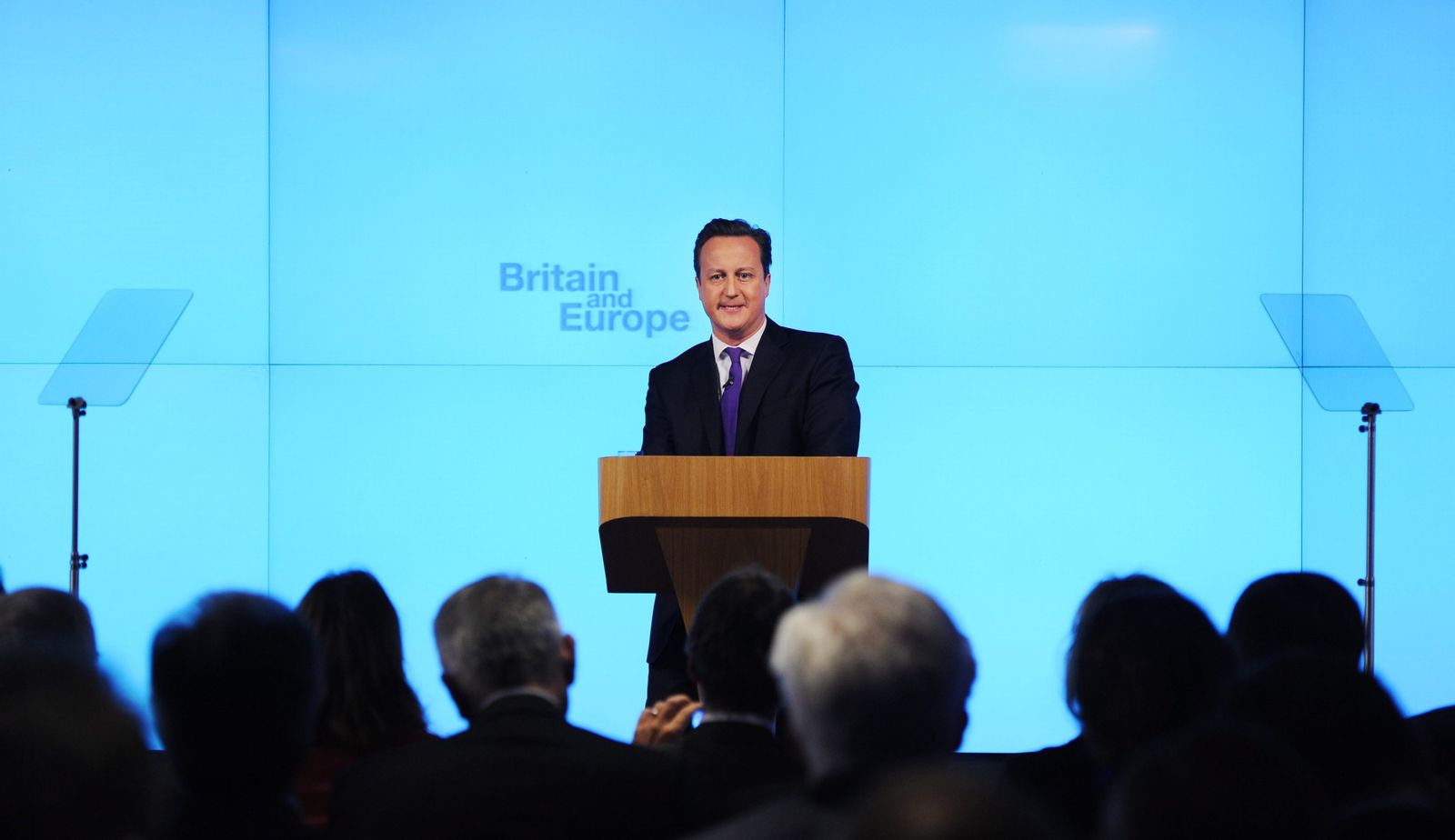 In or out? David Cameron plans to give the British a choice on EU membership.