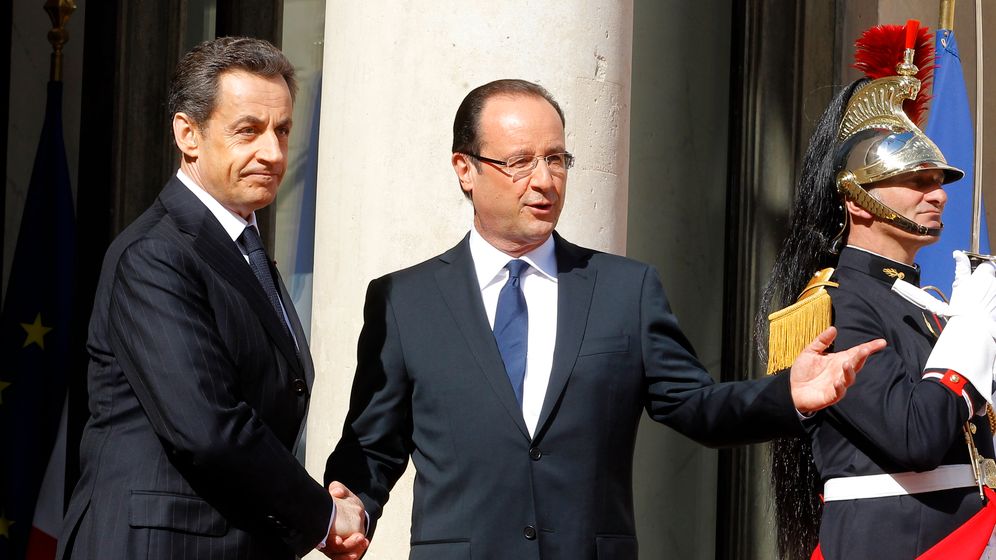 François Hollande was inaugurated as France's first Socialist president in 17 years on Tuesday at a relatively low-key ceremony after which he got drenched while being driven down the Champs Elysees in an open-top car, as a troop of French cavalry in ceremonial uniform cantered behind him.

He was presented with the official chain of office, a gold collar weighing nearly a kilogram engraved with his name and the six previous presidents of the Fifth Republic. He also had a Legion of Honour medal pinned on his lapel, and he received the launch codes for France's nuclear arsenal during a brief meeting with former President Nicolas Sarkozy.

A 21-gun salute marked the start of a marathon in domestic and foreign politics, with upcoming summits of the G-8, G-20 and NATO. There will still be some time on Tuesday afternoon for symbolic gestures and the naming of the prime minister before this evening, when Hollande will fly to Berlin for his first state visit -- and most likely his first clash with German Chancellor Angela Merkel in their growth-versus-austerity spat.

Hollande can't afford to compromise too much, or too quickly. He faces yet another campaign battle: On June 10 and 17, France will hold parliamentary elections that will shape Hollande's five-year term in office. He will only be able to push through his reform plans if his Socialist Party (PS) enjoys a solid majority in parliament.

There's no guarantee of success. In the presidential election, Sarkozy received more votes than Holland in 244 of France's 577 electoral districts and, in 80 other ones, the Socialist candidate only beat out his conservative rival by a few percentage points. Time is running out and, to score points, Hollande will have to hit the ground running. The anti-Sarkozy resentment that aided Hollande's victory must now be replaced by a spirit of optimism. The day after he returns from Berlin, the machinery of an elaborate plan of action will be set in motion.

Cleaning Up the Legacy of the Sarkozy Era

First, he must make convincing cabinet appointments. Government posts need to be equally divided among men and women, and consideration has to be given to bigwigs within the party hierarchy, the barons of regional strongholds and both veteran and up-and-coming political insiders. What's more, the Socialists' new coalition partner, the environmentalist party Europe Ecologie-Les Verts (the Greens), will also have to be kept in mind. All told, it is a tricky act of balancing interests, and every decision will involve posts, privileges and party factions.

Then it will be time to start cleaning up the legacies of the Sarkozy era, during which Hollande will have to swiftly prove he meant business with his slogan "Change Begins Now." He will send his first symbolic signals via decree by cutting his ministers' salaries by 30 percent and making their business interests transparent. Whereas Sarkozy boosted his monthly salary to €19,331, a 170 percent increase, Hollande will cut the presidential wage down to €13,552. Caps will also be put on the compensation of the chief executives of publicly owned companies, and state expenditures will be temporarily frozen.

Families of school-age children should also quickly and directly benefit via an increased allowance for school materials. The state will also vouch for downpayments that young people have to make for rental contracts , and there will be an increase in the statutory minimum wage. What's more, homosexual couples will soon be allowed to marry, and the euthanasia laws will be reformulated. Restrictions on the residency rights of foreign students will also be repealed.

'There Isn't Any Grace Period'

Then it will come time for the painstaking legislative work. Draft laws on a number of issues will have to be negotiated, including ones to split the banks into retail and investment institutions, and to set up a fund for investments. Preparatory steps will be taken for a tax reform. At the same time, Hollande intends to get to work on restructuring government finances. Audit office employees are supposed to deliver the results of their ongoing number-crunching before the summer recess. Together with up-to-date figures on growth, these results will show what will be left over from Hollande's campaign pledges.

Hollande is France's second Socialist president in the Fifth Republic, launched in 1958, and the magazine Marianne has already dubbed him "François II" in reference to François Mitterand, president from 1981 to 1995. As such, the actual dilemma Hollande faces is performing the balancing act needed to pursue his party's goal under the current circumstances. How can Hollande harmonize the Socialists' ideas about income redistribution and desires to maintain social benefits with the country's downward spiral of debt, the budget deficit and the demands of globalization? And how can the requirements of a rigorous belt-tightening plan be reconciled with the stimulus needed to promote lasting growth?

"There isn't any grace period," Hollande campaign manager Benoît Hamon already said on election night. "The victory is excellent. But the anger starts the next morning."