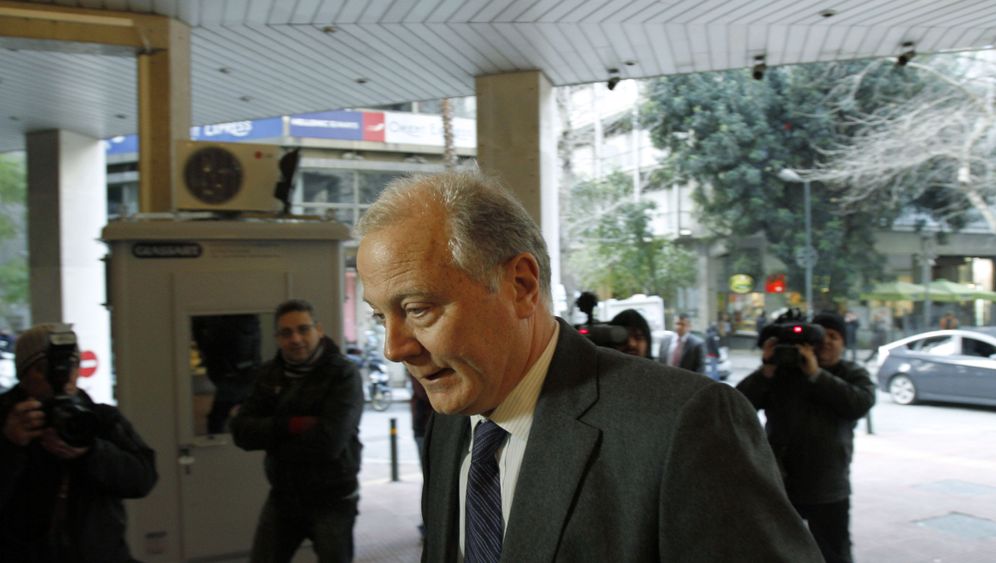 When the head of Greece's central bank, George Provopoulos, recently met with his European counterparts, the session turned into a confession. His fellow Greeks had just withdrawn €800 million ($1.022 billion) from their bank accounts, within just a few days. Consequently, at a meeting of the Governing Council of the European Central Bank (ECB) last Tuesday, Provopoulos had to ask for money -- once again.

Most Greek banks are currently cut off from the usual ECB lines of credit. They no longer have sufficient collateral. A number of banks are even currently operating without sufficient capital as a risk buffer for their activities. Indeed, Provopoulos had to accept last week that yet another crop of Greek banks were branded as unfit for ECB refinancing.

These zombie banks are being kept alive with help from the so-called Emergency Liquidity Assistance (ELA) -- a rescue aid program managed by Provopoulos. At every session of the Governing Council, he has to have these special allocations approved.

For the time being, he has succeeded. Last Tuesday, the ceiling for the amount of aid that Provopoulos is allowed to give his banks was even raised again, from roughly €90 billion to €100 billion. But the Council is harboring increasing doubts about this permanent subsidy.

The central bankers are caught in a moral conflict. Cutting off the flow of money would have disastrous consequences: Greece would quickly run out of money. The population would soon not even have enough cash to pay for its daily purchases.

Greece is on Life Support From the ECB

The entire country essentially depends upon life support from the ECB. At the same time, the risks are mounting on the central banks' balance sheets. Already back in February, Greek banks had accumulated more than €106 billion of debt alone in the TARGET2 internal payment system of the euro zone's central banks.

But the central bankers are particularly annoyed as they once again have to play the role of major bankroller because the political system is failing to address the problem. Indeed, in the Greek election circus, it looks like the issue of urgent reform of the country's ailing banks may be given short shrift.

Nevertheless, funds are available: The most recent bailout package for Greece includes €50 billion to recapitalize the financial sector. The euro partners have even already transferred half of this money to Greece.

The legal conditions for the bailout have not been clarified, though. Originally, private banks were supposed to raise roughly 10 percent of their recapitalization from private investors, or run the risk of being nationalized. Investors are, however, hard to find. So this uncomfortable issue has been sidelined in the election campaign.

By the end of last week, not even an initial bridge financing of €18 billion had flowed to the banks -- funds which the interim government under Loukas Papademos had approved in a rush before the election on May 6.

Central bank governor Provopoulos was thus recently forced to admit to his colleagues on the ECB Council that the promised recapitalization of two particularly ailing financial institutions could not be accomplished as planned by the end of May. There are many signs that the whole reform program, which was originally meant to run until September, may have to be prolonged until the end of the year.

And what would happen if the euro partners stopped making their aid payments? According to an analyst with the Moody's rating agency, the Greek banks have in the meantime become "economically insolvent," and thus urgently rely on assistance from the rescue fund. Even former model institutions, such as the country's largest lender, the National Bank of Greece, which posted earnings of €1.6 billion in 2007, are fighting for their survival.

Greek banks may have never indulged in high-stakes gambling on the US real estate market, but after they entered the euro zone, they aggressively expanded their lending operations. Now, they are threatened with massive defaults. Furthermore, the country's financial elite is closely linked to the political arena. At the beginning of the crisis, this prompted the banks to purchase huge amounts of sovereign bonds. The partial debt waiver by private investors a few weeks ago suddenly took an enormous bite out of the banks' remaining capital reserves. This so-called haircut cost the country's four largest banks alone €24 billion.

To make matters worse, nervous customers have been pillaging their bank accounts since the beginning of the crisis. The banks have already lost one-third of all their deposits.

Some of Europe's central bankers are nevertheless no longer willing to allow themselves to be endlessly tapped for cash. Belgian Luc Coene has already openly warned that even the ELA payments must "absolutely" be stopped if the Greek banks are actually hopelessly bankrupt, and not merely illiquid.

"Contrary to widespread belief, monetary policy is not a panacea," wrote Jens Weidmann, the head of Germany's central bank, the Bundesbank, in a recent newspaper article. He is primarily concerned with the lax approach to the collateral that the banks use to acquire fresh money. Standards have been repeatedly lowered during the crisis. According to an Athens banker, the regulations are now "very relaxed."

The banks have simply submitted massive quantities of their own bonds to the central bank -- after the government stamped them with a state guarantee.

But what will this guarantee still be worth if Greece becomes insolvent? The dubious bank bonds along with Greek government bonds make up roughly 60 percent of the collateral that Greek banks have supplied to obtain cash injections.

At least the worrisome bank bonds will be on the agenda of the next ECB Governing Council session. The fact of the matter is that this bizarre practice was slated to be phased out by mid-2012 for countries that receive aid from the euro rescue fund. For the time being, though, nobody is talking about that plan.