Helena Mourão was lucky she didn't lose her job until this January. She was able to work as a nurse for a full two years after completing her schooling, which makes her a sought-after employee -- although not in her native country.

No fewer than four German employers were eager to hire the Portuguese nurse. She chose a hospital group called Klinikverbund Südwest in Sindelfingen, southern Germany, which handed her an employment contract to sign, written in German and Portuguese, during her interview. "There are several hospitals there, which gives me more career opportunities," explains 25-year-old Mourão.

Mourão has since signed the contract and will move to Germany in May. Her boyfriend, a civil engineer, stands beside her and smiles bravely. He's looking for a job too, preferably in Germany.

Mourão and over 100 other nurses have come to Porto to attend the first job fair held jointly by Germany's and Portugal's employment agencies. Young Portuguese workers are currently the most sought-after export from their crisis-ridden country. They are setting out into the world because of a lack of opportunities at home.

German employers are thrilled. "These are top people with a good education," says nursing manager Joachim Erhardt. Since the new arrivals don't speak German, the hospital group in Sindelfingen is paying for their first six months of room and board, as well as an intensive language course in Stuttgart.

The ongoing economic upswing in Germany has emptied out the job market in many regions of Europe's largest economy. International companies and small to medium-sized businesses alike are desperate to hire engineers, while nursing services and hospitals are also short-staffed. According to Erhardt, the healthcare sector in this aging country will need 800,000 additional skilled workers by 2020.

The International Placement Service of Germany's Federal Employment Agency has had to adapt to the new circumstances. As recently as last year, the organization was mainly involved in finding jobs for Germans who wanted to work abroad. Now, three of these teams are being disbanded due to lack of demand, with the staff focusing instead on job fairs in Porto, Naples or Barcelona, where they can recruit skilled labor for German companies.

It's not only in German states such as Baden-Württemberg and Bavaria, which traditionally have had low unemployment rates, that conditions on the job market have improved. The less prosperous region of Westphalia, for example, is also short on skilled applicants. "The response to our last job advertisement was pretty much zero," says Myra Mani, who runs an outpatient care facility in the western German town of Lüdenscheid. At best, she says, the local employment agency sends over a few people, who make it clear within the first interview that they don't actually want to work.

The search for qualified personnel has become the central task for business owners such as Mani. Her own father immigrated to the Westphalia region from India 37 years ago, and now the family business draws its skilled labor from Portugal. Europeans need qualifications and language skills, but there's no difficulty in obtaining employment permits for them.

Mani, who has a degree in business administration, traveled to Portugal for the first time last year, but found people there not particularly eager to take up her offer of coming to Germany. "Germany and Merkel were not particularly well liked," she says.

But the worse the crisis in Portugal grows, the more popular Germany and its chancellor become. Portugal lived beyond its means for years and ended up requiring a bailout of €78 billion ($104 billion) to date from the International Monetary Fund and the EU. Fully a third of Portuguese people under 25 are unemployed. While Germany's public sector workers' union is demanding a pay rise of 6.5 percent, nurses in Portuguese state-run hospitals have seen their annual bonuses cut without any compensation.

"The lack of prospects here is pretty extreme," says Gesine Silzer, human resources manager for Klinikverbund Südwest, the Sindelfingen hospital group, during a visit to Portugal. Many stores in downtown Porto are boarded up, signs on run-down building walls advertise the next general strike and many buildings are for sale.

Silzer tells the story of a qualified male nurse scraping a living with occasional jobs as a shoe salesman. She handed him and 29 others employment contracts, but with a twinge of a guilty conscience -- will the country be able to recover its strength if its well-educated young people are taken away?

A Tradition of Emigration

Politicians in Lisbon take a pragmatic view, openly encouraging the country's young people to try their luck abroad. Portugal has a strong tradition of emigration, with World Bank statistics showing about 20 percent of all Portuguese living abroad in 2010. Since the 15th century, when Portuguese explorer and navigator Vasco da Gama became the first person to sail directly from Europe to India, the Portuguese have found joy in discovering new places, leaving behind the land of melancholy Fado music and starting anew elsewhere. "Pioneers of Globalization" is the title of one book about the Portuguese.

Former colonies such as Brazil, Mozambique and Angola still rank among the main destinations for Portuguese emigrants, but lately the small southern German town of Schwäbisch Hall has become a focus for Portuguese dreams of a better life.

"There is a city in southern Germany with 3,000 open positions and an average monthly salary of €2,700," reported one Portuguese journalist, who came to Schwäbisch Hall on the invitation of the mayor, together with journalists from Greece, Spain and Italy. Engineers could earn €6,000 to €8,000 a month and the schools are free, she wrote.

For many in Portugal, that must have seemed like a description of paradise. Soon after that article appeared in the business journal Diário Económico, Schwäbisch Hall's employment agency, the mayor and local employers were flooded with over 14,000 applications from Portugal. Some applicants didn't even wait to be invited for an interview, but simply made the trip of over 2,000 kilometers (1,200 miles) across Europe to seize the supposed chance of a lifetime.

"It was irresponsible to awaken such aspirations," says Clemens Miola, adding that the whole thing was more a marketing ploy on the part of Schwäbisch Hall than a specific offer. Miola is one of the directors of the Evangelische Heimstiftung, the largest provider of nursing care for the elderly in Baden-Württemberg, which runs 73 nursing homes. This organization, too, is seeking skilled workers in Portugal. At the Porto job fair, Miola now has to contend with nurses who want salaries at least as high as the average in Schwäbisch Hall.

The Evangelische Heimstiftung is currently training 570 people in Germany, and still isn't meeting its staff needs. "We need to adjust to demographic shifts," Miola says. He's pinning his hopes on young people from Portugal and Spain, whose Christian value system should help them integrate quickly into this Protestant organization. After six months of language courses paid for by the Heimstiftung, they will earn the same salaries as their German colleagues. Contractually, they will then work for the organization for 30 months, or "hopefully longer," as Miola says.

César Ferreira, director of the employment agency in Portugal's Norte region, has 2,000 nurses and several thousand engineers to offer. "It's like a wave," says the fair-haired Portuguese intellectual with rimless glasses, shrugging his shoulders. Someday, he believes, those same workers will return to Portugal, bringing with them extensive international experience.

Many experts in the field doubt that will be true. This time it's not farm laborers with little education setting out for Western Europe, as happened in the 1960s. Now companies such as Continental, Bosch and Volkswagen are specifically approaching Portuguese engineers with the hope of moving them to Germany.

Other European countries experiencing economic crisis also make for good recruiting grounds. Unemployment among academics is extremely high in Spain as well. According to a recent survey by the European Commission, seven out of 10 young Spaniards are willing to move abroad. "An unprecedented loss of talent," laments Spanish Labor Minister Fátima Báñez.

The demand for German courses has increased noticeably all across southern Europe. Their lack of German language skills remains the largest obstacle to their employment. Nurses and those providing care for the elderly are required to achieve at least the B2 (upper intermediate) level in German, as defined by the Common European Framework of Reference for Languages, if they want to work in their own field and not simply as aides.

Two Frankfurt hospitals are paying for eight young Portuguese nurses to attend a six-month language course at the Goethe-Institut in Porto. Two weeks ago, all eight made a spontaneous decision to fly to Frankfurt at their own expense, to meet their future colleagues and have a look at their rooms at the nurses' residence. "We're in love with Frankfurt," says Barbara Sousa, 23. The hospitals hope that enthusiasm will last as long as possible.

Competition for these new employees is stiff. Elsa Lagoaceiro, a young woman with a lion's mane of dark hair, also received a contract from a German employer at the job fair in Porto, but she says doubtfully, "I need to talk to my family first."

Germany is certainly a "stable, fascinating country," Lagoaceiro says, but she studied abroad in Spain during university, and at the moment she's taking a French course, so she has several options. She also has a few friends working at a private clinic in France.

In fact, the only country that doesn't really offer any job opportunities for this young Portuguese woman is Portugal. 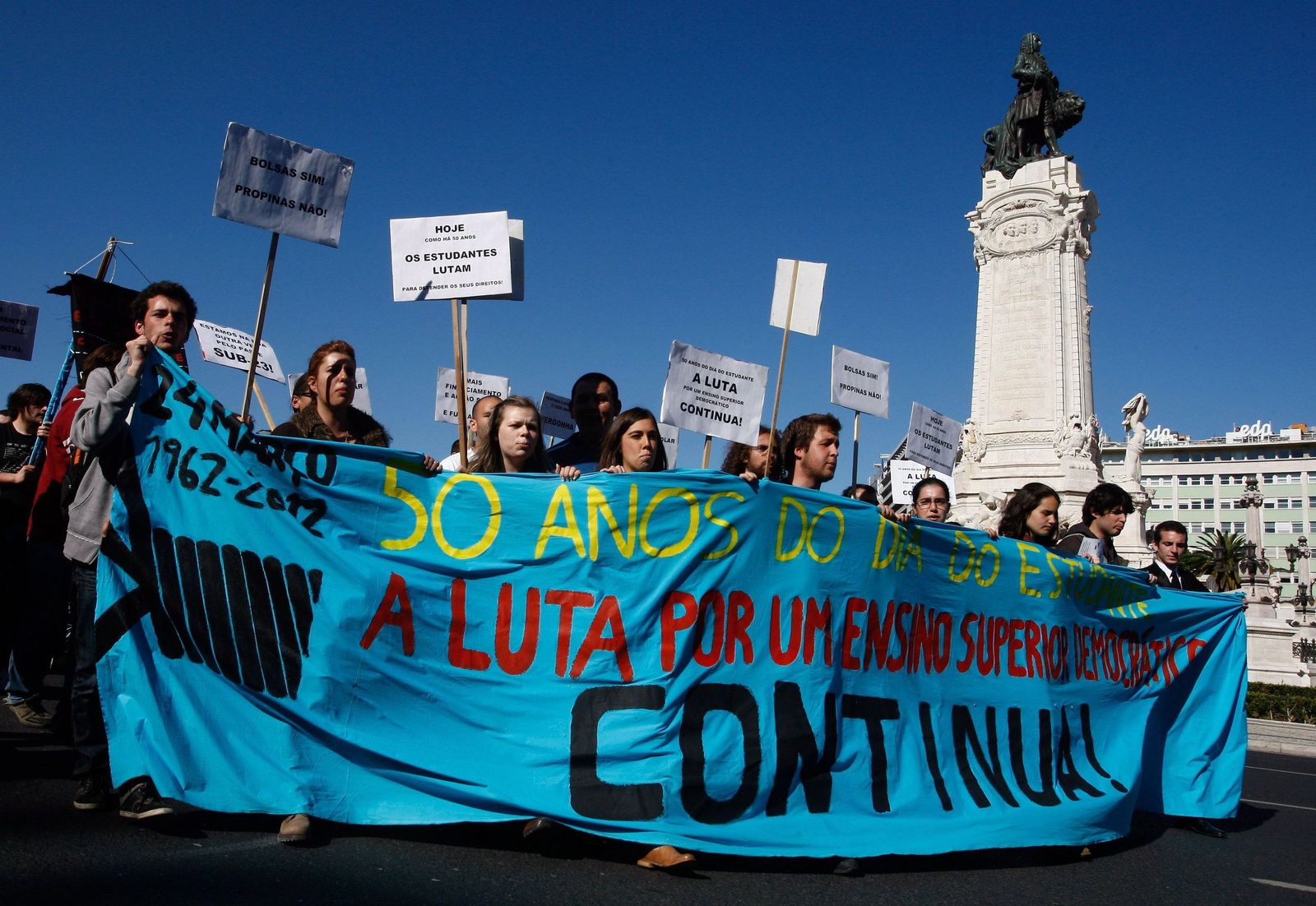 Portuguese students protesting in Lisbon this month -- they have poor job prospects at home.