The federal government in Berlin has denied a warning from the president of Germany's Ifo economics institute, Hans-Werner Sinn, that the German central bank, the Bundesbank, may face hidden risks of half a trillion euros ($660 billion) in the form of claims amassed under the Target2 European interbank payments system.

Sinn and other critics have been arguing that the Bundesbank has extended that sum in loans to southern countries within the euro zone and that the bank could be left with claims on its books if a country like Greece were to leave the euro zone.

But SPIEGEL has learned that the German government doesn't see the Target2 liabilities as a problem. "The German government doesn't share this view," the German Finance Ministry said in a written response to a question submitted by Peter Gauweiler, a euroskeptic member of parliament with the conservative Christian Social Union party, the Bavarian sister party to Chancellor Angela Merkel's Christian Democratic Union.

The claims were listed as items to balance the accounts of the European Central Bank, the ministry said. Its statement also contradicted the view of the Bundesbank which recently described the claims as a "symptom of the financial crisis."

Government experts argue that the Target system claims would remain even if a country were to leave the euro zone and introduce a new currency. In addition, the claims are secured by collateral.

Huge Imbalances in Payments System Since 2007

The Target system settles payments among central banks that arise through cross-border transactions. When the economy is balanced, and goods and money are transferred in all directions, the payments always balance each other out. Even when a country imports more goods than it exports, it finances the gap with capital inflows from abroad such as bank loans. Then, too, the Target accounts are virtually balanced, as was the case until early 2007.

Because countries like Greece, Spain or Portugal have been running trade deficits for years, they were reliant on capital inflows from abroad even before the financial crisis, in order to pay for the goods and services they bought. But since the crisis erupted in 2007, this flow of capital has virtually dried up. The banks in all euro-zone member states had to keep their money together and withdrew their funds from countries they deemed insecure. Loans that expired were not renewed.

In addition, wealthy people transferred their money abroad because they were worried it would lose value. First this happened in Greece, Ireland and Portugal, then it also occurred in Spain and Italy. It meant the banks in those countries had fewer savings deposits with which to make loans. As a result, Greece and the other troubled nations didn't have enough money to finance their imports.

So if Greek banks wanted to give loans, for example to finance the purchase of imports from Germany or the Netherlands, they had to borrow the money from the Greek central bank. The central bank simply took the money out of nowhere and ran up a bill in the form of a Target liability with the euro system. "These countries are simply getting money from the printing press," complains Ifo's Sinn.

Since the 2007 financial crisis, huge imbalances have built up among the central banks of the 17 euro member countries. While the European crisis countries Italy, Spain, Ireland, Portugal and Greece have run up deficits of more than €600 billion as part of the Target2 system, the Bundesbank's claims have reached €498 billion.

Technically, the German government is correct in its answer to Gauweiler's question. Strictly speaking, there are no Target loans because a loan would involve a formal arrangement between a creditor and a debtor. No such arrangement exists -- the Target imbalances simply keep on growing as long as commercial banks in Greece and other problem countries have to get their money from their respective national central banks -- because hardly anyone else wants to lend them any money.

The Berlin government is also right in its argument that Target claims will remain in force even if Greece, for example, were to leave the euro zone. But it seems barely conceivable that the Greek central bank could ever repay its Target liabilities of some €108 billion in that case -- because Athens won't be able to print any more euros.

Besides, the collateral that supposedly backs the Target claims wouldn't be worth much if it were called on. It consists of securities that all commercial banks have to deposit with their national central bank when they borrow money from it. Those securities amount to only a small share of the central bank loans, and the quality of collateral accepted in the southern euro zone states is fairly low -- the Greek central bank, for example, accepts Greek government bonds as securities. If Greece were to leave the euro zone, a state bankruptcy would be virtually inevitable, say experts -- which means the collateral would be virtually worthless.

Sinn's reference to a €500 billion risk refers to the extreme scenario in which the entire euro zone were to break apart, no central bank were able to settle its Target liabilities and all collateral were to become worthless.

But it's not so unrealistic that Greece may quit the euro zone and that the Greek central bank would be unable to settle its Target liabilities. In that case the Bundesbank would book losses of some €30 billion. 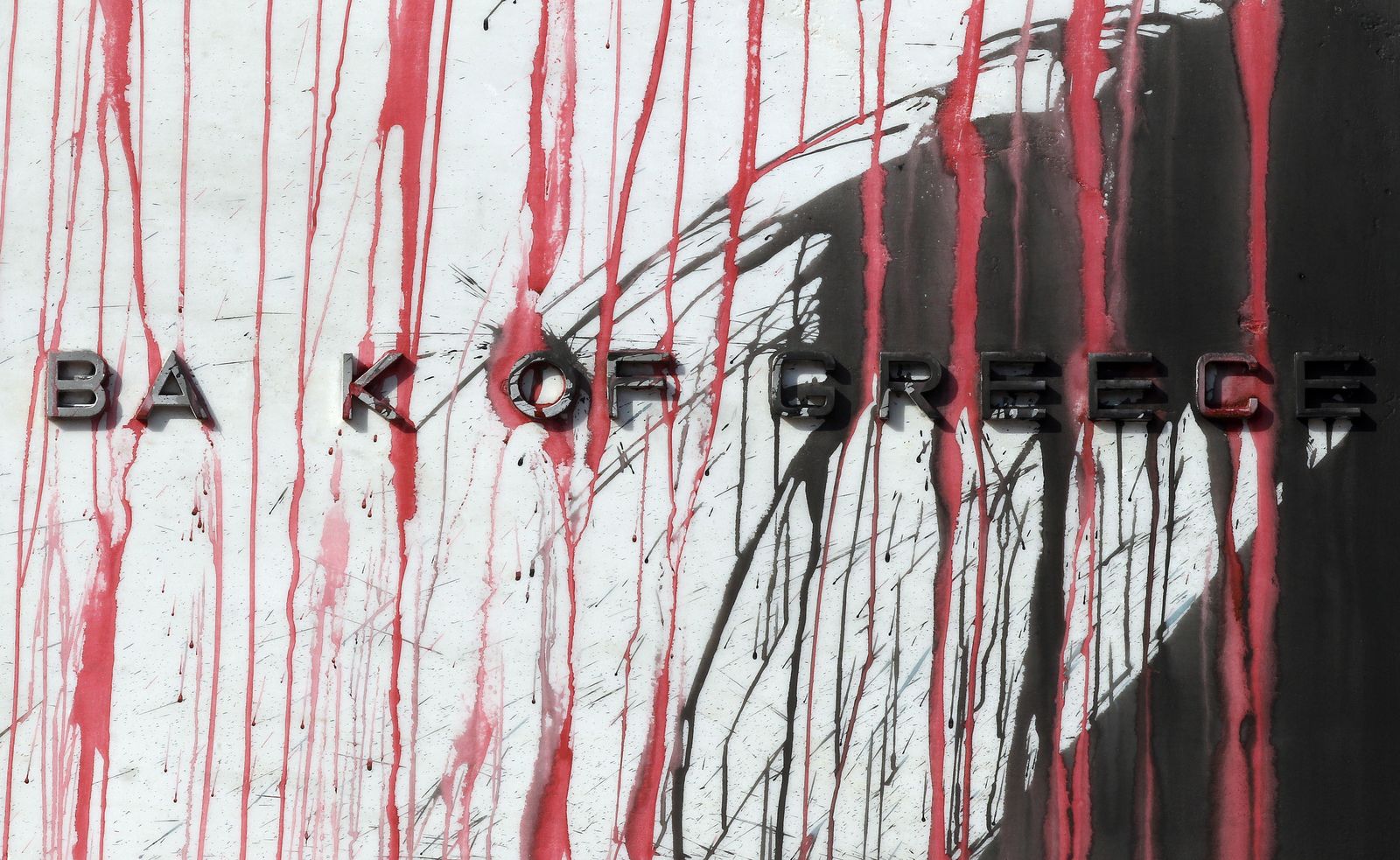 Paint thrown at the sign of the Greek central bank: does it owe more than 100 billion euros?