When a country is doing well, you can usually see it. Take Zurich, Switzerland, for example. The city has changed so much in just a few years that parts of it are almost unrecognizable. Entire new districts have sprung up with chic apartments. Office towers have shot up. Shops, restaurants and bars are full, despite the fact that a beer can be a bit steep at a price of six francs, or five euros. The people have money.

Experts are united in their opinion that this prosperity is the product of Switzerland's networked economy. The country has profited enormously from open borders and from an influx of qualified foreign workers. Indeed, the European Union is its largest trading partner. Despite this, a razor-thin majority of Swiss voted in favor on Sunday of an initiative to reintroduce restrictions to the number of foreigners allowed to live and work in the country. Some 50.3 percent of eligible Swiss voters cast ballots in favor of the initiative introduced by the right-leaning, nationalist Swiss People's Party -- rejecting immigration policies of recent years that have been highly successful.

How is this possible? One important reason is the contradictory self-image of the Swiss. Switzerland views itself as a nation forged by the will of the people -- a community that decided to come together and create a state. The truth is precisely the opposite -- the Swiss state wasn't forged by will. Switzerland's regions haven't come together because it is their inner-most wish to do so. The reasoning is more profane. The German-language areas don't want to belong to Germany, the Suisse romande don't want to be a part of France and the Ticinesi don't want to become part of Italy. Instead, they are Swiss.

But an identity built on the rejection of an alternative has its weaknesses. Ever since the charisma associated with William Tell and the Old Swiss Confederacy faded, the mythological underpinnings of oft-evoked Swiss exceptionalism have vanished. The only thing remaining to substitute for a national identify is prosperity. Being richer than those surrounding you -- it's still something.

But there's a flipside: Those who have a lot also have a lot to lose. And the prospect of having to share the francs that have piled up with immigrants can quickly spiral into existential angst. To exaggerate just a little: There wouldn't be much left in being Swiss if the country's standard of living were to regress to that of the Germans or, God forbid, the French or the Italians.

Of course, no one would dare to say that openly. Instead they use what they allege to be rational arguments, like trains that are too full, urban sprawl or congested motorways. Even liberal voters are susceptible to these kinds of the-boat-is-full slogans. The Swiss have even come up with their own politically correct term for the apparent woes caused by mass migration: Dichtestress, or "crowding stress" -- a term used in biology to describe the stress effects on animals of overcrowding. What the Swiss really mean is that they are afraid of change.

Ironically, the rural areas where many of the "yes" voters on the SVP initiative originated -- particularly in the German-speaking part of the country -- are the least effected by immigration. Residents of the large cities, by contrast, where local trains and trams might actually get a little full sometimes, largley rejected the initiative.

So what happens next? The so-called bilateral path, the country's carefully worked out relationship with the EU, which Switzerland has never sought to join, seems to have reached a preliminary end. The government in Bern will now have to attempt to renegotiate its treaty with the EU on the freedom of movement.

The End of Free Movement?

It's not as if the borders will suddenly become impermeable. German doctors, Portuguese construction workers and Italian waiters won't be forced to leave tomorrow.

But the country does plan to reintroduce quotas on the number of immigrants that can come to the country. Under the referendum, the government now has three years to implement the provisions. It is unlikely that officials in Brussels will be prepared to offer the Swiss much by way of concessions. The EU has enough of its own problems at the moment and is likely to be even less inclined to fulfill the special wishes of this island of prosperity at its center.

If the freedom of movement treaty is allowed to lapse, then other agreements between Switzerland and the EU will also have to be phased out because of their legal interconnectedness. Switzerland's membership in the Schengen area of border-free travel could also hang in the balance. Air traffic, agriculture, research and the energy industry could become the first sectors to suffer under the new isolation. It would also slam the brakes on many companies because it would limit their ability to find qualified foreign employees. It's bizarre: The Swiss are reestablishing their borders out of fear of economic decline. But it may come at a very high price.

Meanwhile, the immigration debate in Switzerland will continue, with a new, more radical initiative in the pipelines to wall the country off from the rest of the world. A group of environmental activists and growth critics want to limit immigration in Switzerland to 0.2 percent of the population each year. They hope to put the plan before voters next year. And although it is possible that the Swiss will come to realize by then that they are a part of Europe, it isn't very likely. 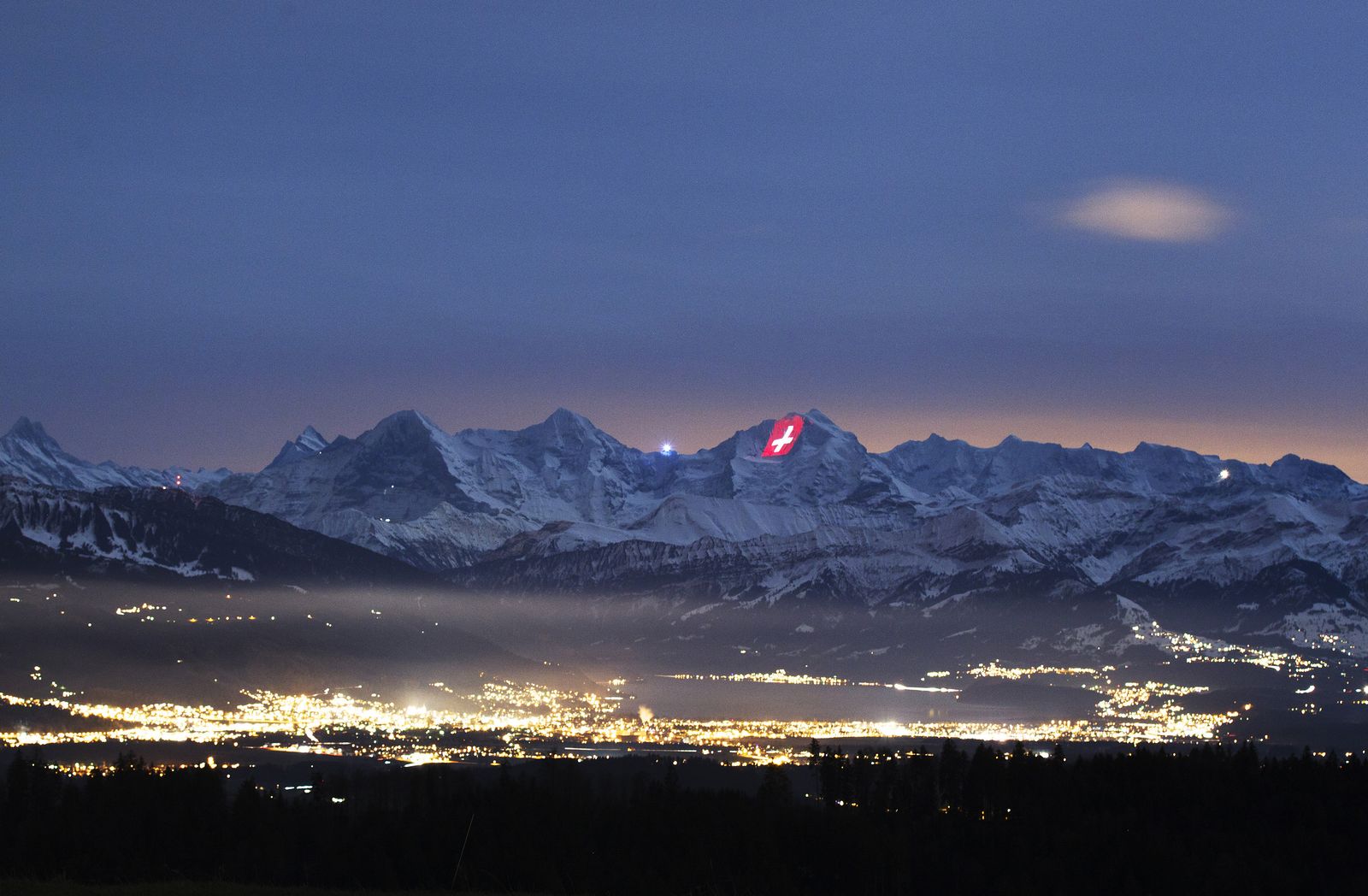 A giant light installation of the flag of Switzerland by Swiss artist Gerry Hofstetter illuminates the north face of the Jungfrau mountain.