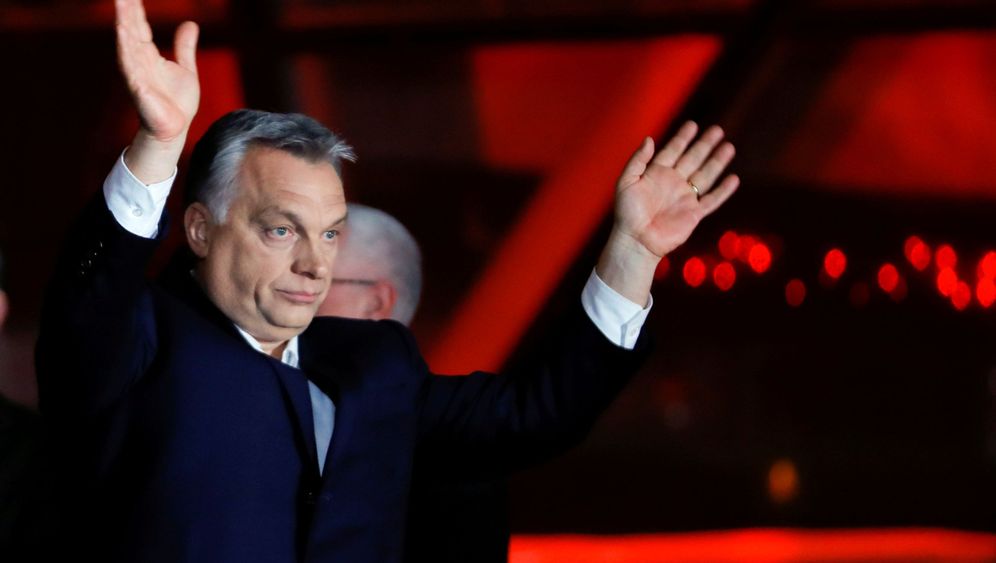 For a few days, it looked like the election might actually be close for Viktor Orbán. Pollsters had predicted a tight race and optimism flourished among Hungary's opposition parties. In the end, though, Hungarian Prime Minister Orbán and his party Fidesz scored a surprisingly clear victory on Sunday, likely obtaining yet another two-thirds majority in parliament -- for the third time in a row. Although ballots from abroad are still being counted, it is doubtful they will affect the ultimate outcome.

It's an historic victory for Orbán, but also for Hungary and the rest of Central and Southeastern Europe. Never before in Hungarian history and never since the end of the communist dictatorships has a party in the region scored such a commanding victory in three elections in a row. In an extremely divisive campaign, Orbán essentially focused on one single issule, warning against Hungary's "downfall" at the hands of "immigrants." It appears that a majority of Hungarian voters view him as the only guarantee against such a scenario.

But Orbán didn't use his victory on Sunday night as an occasion to boast of his triumph. During an appearance shortly before midnight together with party and government members, he showed relative reserve. "We won," Orbán announced in front of cheering supporters, who could be heard shouting a chant usually associated with right-wing extremists or radical football fans: "Ria, ria, Hungaria." But Orbán called for restraint: "Hungary has achieved a big victory. But even when you get a result like this, you still have to remain modest." At the same time, Orbán said that Hungary "hasn't yet gotten to where we'd like to be," but the country is on the path that it has chosen for itself.

When speaking before their supporters after their election defeat, oppostion leaders seemed as though they had just awoken from intoxication with the cold water of reality splashed in their faces. Several party heads and top candidates announced they would step down, including Gábor Vona, the chairman of the former right-wing extremist party Jobbik. The party will still be the second strongest in parliament, but Jobbik delivered the same result it did four years ago and, as such, fared well behind expectations.

Overall, the election results show the extent to which the election conditions were tailored to Orbán's Fidesz, Hungary's only large political party. Of the party's 199 members of parliament, 106 were elected in single-member constituencies based on the first-past-the-post system. In many constituencies, Fidesz candidates only won with a relative majority, with the combined outcomes for the opposition candidates significantly higher in come cases. But the parties would have had to join forces and put up a single joint candidate in order to beat Fidesz -- and they were unable to reach such an agreement in many electoral constituencies.

For some observers, including G.M. Tam, a leftist philosopher in Budapest and former anti-communist civil rights activist, Orbán's landslide victory didn't come as a surprise. "In recent years, elections all over Europe have been decided based on the so-called immigration question," Tamás told DER SPIEGEL. He says that consensus over a common well-being and common interest is disappearing all over Europe and that an increasing number of groups in society are placing their own interest over those of minorities like foreign citizens or refugees. "Orbán is a strong and talented representative of this trend," Tamás says. "That's why he wins elections. Everyone in Hungary knows that he's corrupt and that he governs poorly, and yet many people still vote for him because they consider it important that he protects them from immigrants and minorities like the Roma."

Orbán Will Stay on Confrontation Course with EU

Political scientist Ágoston Mráz, who is closely tied to the government, described Orbán's election victory as being "extraordinarily great and also rare for Europe" -- and one that exceeded expectations even within the Fidesz camp. Mráz told DER SPIEGEL that the West must recognize that success as well. "When it comes to judging Orbán, the West is a prisoner of its own prejudices," he says. "People don't see how strong the democratic legitimization for Orbán is in Hungary." He says that Orbán is capable of formulating goals that are supported by broad swaths of the population and he offers a strong national identity for a majority of the population. In contrast to many others in the region, Mráz point out, Orbán's party has been extremely well organized for 30 years. "At this point, I think you can even speak of an Orbán era in Hungary," Mráz says.

Expecting Orbán to ease his confrontational political style is unrealistic. In terms of foreign policy, Orbán wants to reform the European Union, essentially transforming it into merely an administrator of European subsidies and a single market -- and not a Europe of shared political values that gets involved in domestic political debates. Orbán seeks to rally Central and Southeastern European countries behind that goal.

The re-elected prime minister is also likely to continue his xenophobic focus domestically as well. There is widespread discontent in Hungary over the numerous corruption scandals involving people close to Orbán and his party and over the poor state of the health and education systems and the deficient public administration. That has prompted Orbán and other Fidesz party leaders to frequently resort to anti-foreigner rhetoric in recent years. The refugee crisis in 2015, proved that the issue is sufficient to boost Orbán's public opinion poll numbers.

All of which makes his reserved appearance on election night seem disingenuous at best. Particularly since Orbán explicitly said a few weeks ago that he planned to deal rigorously with his opponents and critics -- including nongovernmental organizations. In his speech on the Hungarian national holiday on March 15, Orbán said: "After the election, we will of course seek amends -- moral, political and legal amends." 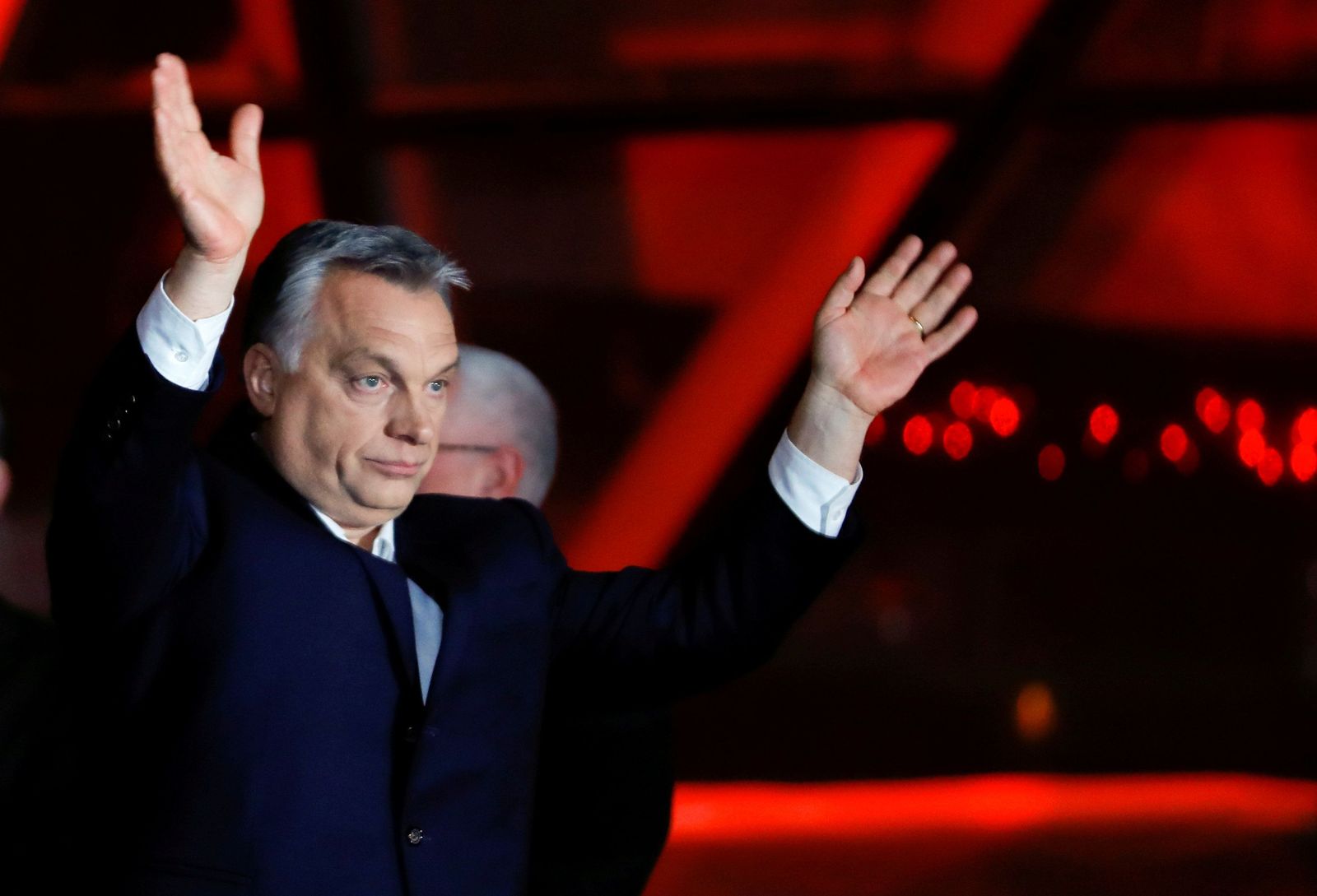 Viktor Orbán emerged as the decisive winner in Sunday's election in Hungary. His nationalist, conservative Fidesz Party scored 48.5 percent of the vote.