Anders Behring Breivik, the right-wing extremist who is serving a maximum sentence for the murder of 77 people in premeditated attacks that devastated Norway in July 2011, is interested in establishing contact Germany's most famous neo-Nazi. SPIEGEL has learned that he sent a letter to Beate Zschäpe, the only surviving member of the German neo-Nazi terrorist group known as the National Socialist Underground (NSU).

Zschäpe, who stands accused of acting as an accessory to murder on 10 counts, currently awaits trial in police custody at a prison in Cologne. That is where Breivik addressed his letter to Zschäpe on May 7, offering his support for what he called their common cause.

The three-page letter, intercepted by authorities before it reached the addressee, has been obtained by SPIEGEL. (Editor's note: all quotations, including errors, are as they appear in the letter.) "Dear sister Beate!" it begins. "I hope you are fluent in English. If not, I hope you would be willing to learn it." But 33-year-old Breivik soon dispenses with small talk, addressing what he perceives to be Zschäpe's political motives.

"If you end up being convicted due to overwhelming evidence then you might reach a point where you may flag your political motives," he writes. At that point, 37-year-old Zschäpe could potentially use her trial as a propaganda platform, he suggests. "If it is clear that you are indeed a militant nationalist that chose to contribute this way than you will be regarded in a lot of peoples eyes as a courageous nationalist resistance hero who did everything you could and sacrificed everything to stop multiculturalism and the Islamisation of Germany."

Still, Breivik notes that he would have taken a different approach. He writes that attacking the "elites" is more effective than going after "minorities," though both inflict "damage on the multiculturalist experiment." Breivik implies that his attacks, which targeted the Norwegian government quarter in Oslo with a car bomb and a youth summer camp hosted by the country's center-left Labor Party, targeted the elite. By contrast, the NSU is suspected of murdering nine mostly small business owners of Turkish and Greek descent, as well as a policewoman, in addition to staging two bomb attacks and 15 armed robberies over the past 12 years.

While their approaches may have differed, Breivik indicates that he still feels a special kinship to Zschäpe. "I can only imagine how hard it has been for you, struggling alone, sister," he writes. "We are both among the first rain drops which indicate that there is a massive purifying storm approaching Europe." In the letter, which Breivik uses to frequently reference his own crimes and copious writings, along with song lyrics, he concludes that the two are both "martyrs for the conservative revolution," adding that Zschäpe ought to be "extremely proud" of what she has done.

Breivik also acknowledges that he will be imprisoned for life, but says he is staying mentally fit with meditation and prayer. And, should Zschäpe find herself facing a similar plight, he urges her to write to him for support.

Zschäpe was formally charged just last week by the chief federal prosecutor's office and the Higher Regional Court in Munich for her suspected involvement with the NSU, which Federal Prosecutor General Harald Range described as a "unified killing commando." 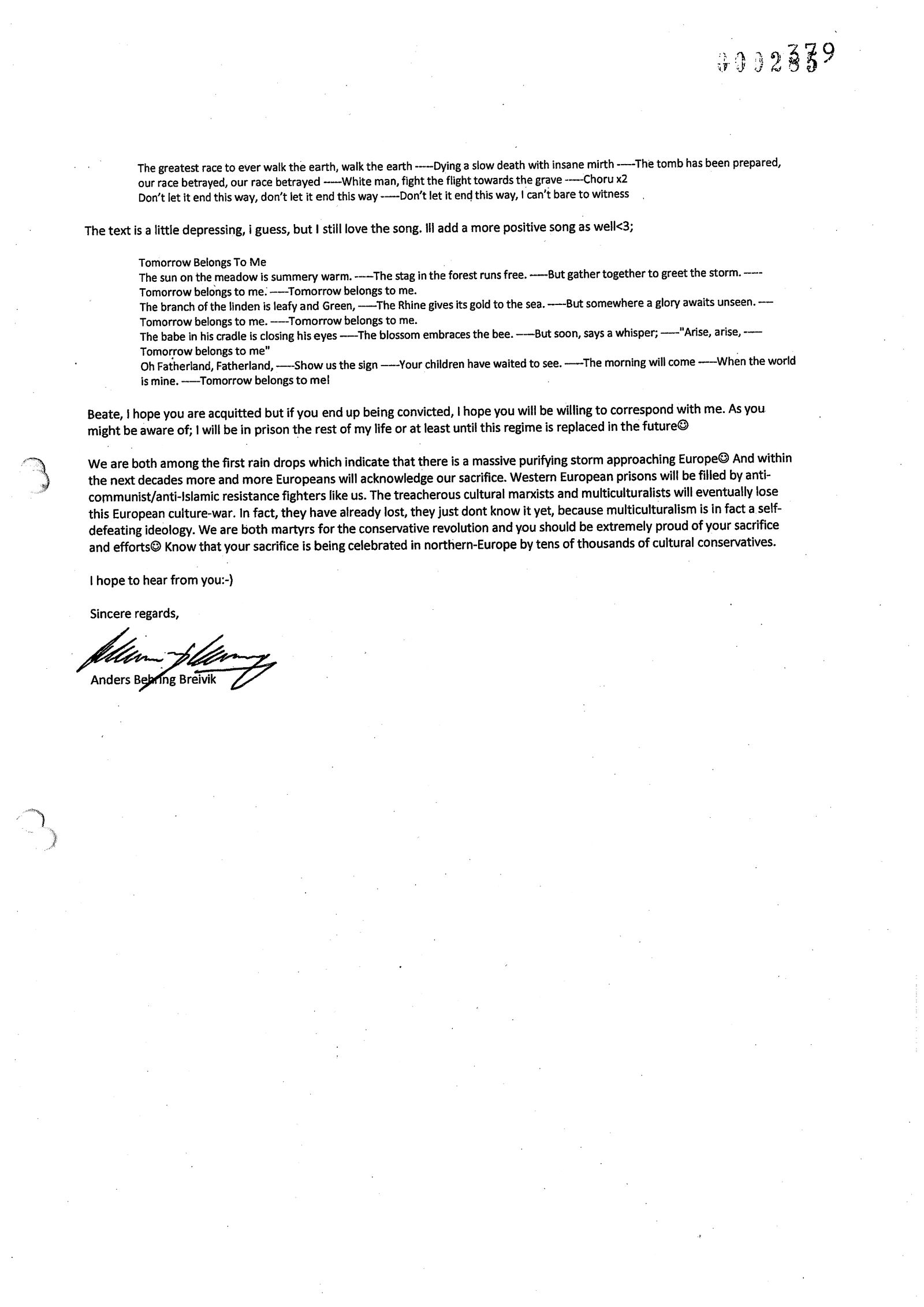 An excerpt of Breivik's letter to Zschäpe. Click image to enlarge the text.