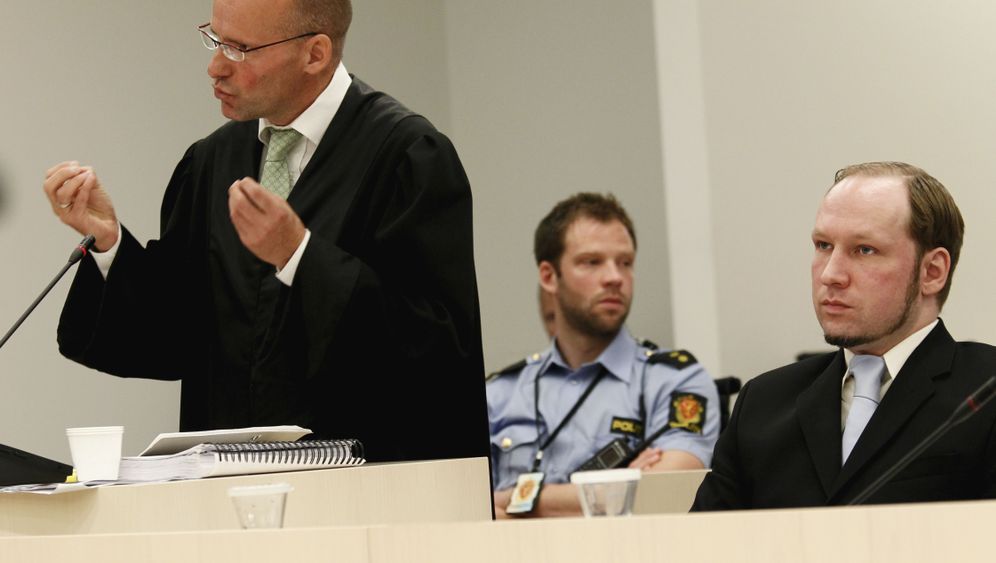 Photo Gallery: A Final Day of Testimony in Breivik Case

The trial of confessed Norwegian mass murderer Anders Behring Breivik ended on Friday following closing statements by the defendant and his lawyer. "There is a fundamental need for new leadership in Norway and Europe," Breivik told the court. He said his attacks on July 22, 2011 were barbaric, but that they were justified. The killer also said he should be acquitted because he had served to "protect the country."

"History shows that you have to commit a small barbarism to prevent a bigger barbarism," the Norwegian told the court. "The attacks on July 22 were preventative attacks to defend the indigenous Norwegian people. I therefore demand to be acquitted." He claimed the governing Labor Party had betrayed the country by permitting a wave of Muslim immigrants and that it was turning Norway into a "multiculturalist hell".

Breivik also insisted to the court that he is sane, claiming he had undergone psychiatric evaluations by 37 people and that 35 had found "no symptoms of mental illness."

Prior to Breivik's statement, testimony had been given on Friday by five relatives of victims or survivors of the July 22 attacks, but relatives and survivors left the courtroom before Breivik gave his closing statement.

Earlier in the day, Breivik's defense attorney gave his closing arguments in the case. The mass murderer's lawyers want Breivik to be declared sane and accountable for his actions. Defense attorney Geir Lippestad formally advocated for his acquittal because although Breivik admitted to the crimes, he did not admit his guilt and based his actions on self-defense. Lippestad said that if convicted the assassin wants to be considered sane and be given the "mildest possible punishment."

Lippestad had to formally request an acquittal because his client, who faces a possible maximum sentence of 21 years, had pleaded not guilty. The crucial question is whether the court considers the right-wing extremist to be sane and accountable for his crimes. Breivik can only receive a prison sentence if they do. Otherwise, even with a guilty verdict, if declared insane he would have to be committed to a psychiatric facility for as long as he was still considered sick and a threat to the public.

"If you declare that Breivik is sick, then you take away his responsibility for his acts," Lippestad said, adding that the defendant had acted like a "cynical terrorist." The attorney said Breivik didn't simply kill as many people as possible -- he specifically chose "political" victims. The last day of testimony in the trial was the toughest one for Lippestad because he had to give his plea for the mass murderer. He had to put himself in Breivik's shoes, as he explained, even though he deeply despised the deeds and the ideology of the accused.

Lippestad spoke for two-and-a-half hours on the 42nd day of the trial. And right from the beginning, he distanced himself from his client's unfathomable acts. Lippestad had sat next to Breivik for two months, and one could tell from his body language the extent to which he despised his client. Most of the time he sat a half-meter back, crunched into his chair so he wouldn't have to be any closer to Breivik than necessary.

In his plea, however, Lippestad certainly went to bat on behalf of his client. His strategy seemed to be to depict Breivik as a political terrorist who didn't kill because he has a violent character but because he is fighting a war against what he perceives as an Islamic threat. He wants to prevent Breivik from being declared mentally incompetent and sent to a psychiatric ward.

That's what two psychiatrists have called for in their forensic expert opinion. It's an opinion that was countered by a second one. Lippestad said the experts are "diametrically opposed." Forensic psychiatrists Torgeir Husby and Synne Sørheim believe the accused is insane and cannot be held accountable for his actions. But their colleagues Terje Tørrissen und Agnar Aspaas think he is -- an opinion that is shared by an 18-member team that observed him in custody.

Lippestad contradicted the prosecution in the central point of the case, claiming that Breivik was accountable during his actions and is therefore completely liable. For their part, prosecutors are convinced of doubts about Breivik's sanity and on Thursday argued for his forced incarceration in a psychiatric facility.

"That little, safe Norway would be hit by such a terror attack is almost impossible to understand," Lippestad told the court. And that may well explain why experts, in their reviews, have come to such different conclusions about Breivik's state of mind. Lippestad said he "completely and totally" shares the prosecutor's opinion that Breivik committed a cruel act of terror of unimaginable viciousness.

Lippestad argued quietly during his testimony, presenting his train of thought in as simple and vivid a way as he could. He also sought to give the judges the feeling that it is up to them to determine which expert report they ultimately choose to follow for their ruling.

Lippestad also reminded them of testimony before the court from right-wing extremist witnesses, who spoke, just as Breivik does, of a type of civil war that is going on. He sought to weaken the view of psychiatrists who believe Breivik subscribes to a bizarre delusional view that served as the impetus for his killing frenzy. "We can all probably agree what we should think of these ideas," Lippestad said in an interview.

The attorney often expressed during the trial just how much the events had strained him psychologically. He repeatedly reported proudly about the letters he received from Norwegians. "The fact that so many people agreed that in Breivik's case the legal path was the way to go was very inspiring to me," Lippestad said in an interview.

Breivik killed 77 people in two attacks. First he set off a car bomb in a government building in downtown Oslo. Then he killed 69 people on the island of Utøya, most of whom were young participants at a summer camp for members of the country's center-left Labor Party. The mass murderer admitted to the crimes but has shown no remorse. He justifies his crimes as a fight against an apparent threatening Islamic takeover of Norway.

Sentencing in the case is expected to be set on August 24.