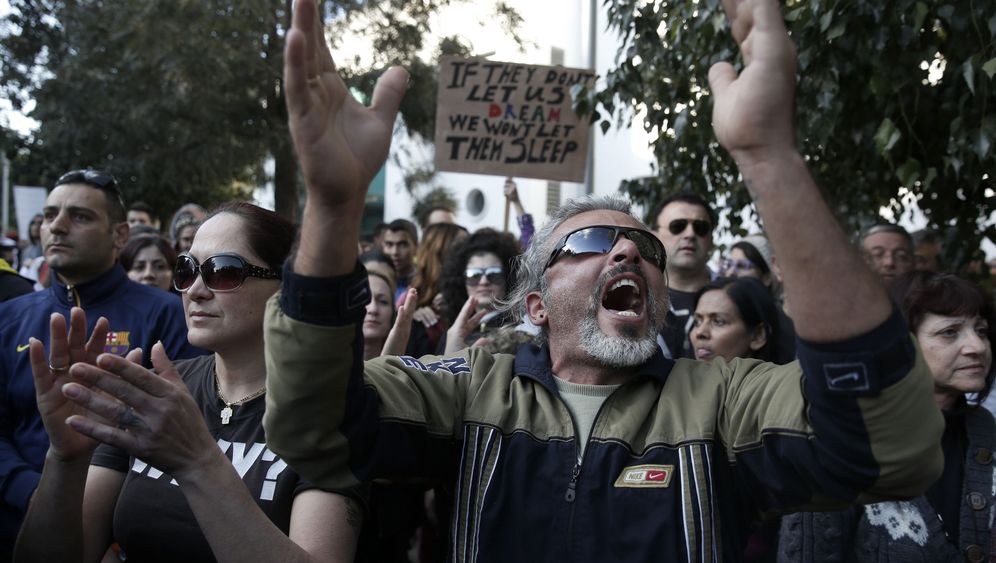 Cypriots are furious. For the first time in the euro crisis, common depositors are being asked to contribute to a bank bailout package. And they are unwilling to give in without a fight. The mood in the capital city of Nicosia is dominated by anger and disbelief -- and Monday's announcement that changes to the original aid package will be forthcoming have done little to minimize the wrath. Indeed, on Tuesday morning, there were growing indications that the Cypriot parliament would refuse to rubber stamp the bailout plan.

In Café d'Avila, several young Cypriots were gathered on Monday evening drinking beer, smoking water pipes and talking about the forced levy on savings accounts held with Cypriot banks. Not surprisingly, everyone is opposed. The one-time tax, complains Alecos, a 28-year-old teacher, is "undemocratic." He himself doesn't have much in his bank account, but it is the principle he finds disturbing. "Ordinary people have to pay, but they have nothing to do with the bank insolvencies."

Marina, who works in advertising, agrees, noting that it doesn't matter how large the levy ends up being. "The troika can't simply decide to take something away from citizens," she says, referring to the European Central Bank, the European Commission and the International Monetary Fund. She says that seizing money from simple savers cannot be the first step, whether they have €10,000 in their accounts or €100,000.

In Café d'Avila, the troika is very clearly the enemy, even if most young Cypriots are well aware of the benefits of European Union membership. "Capitalism is killing us," says Dimitri, a 32-year-old businessman who would rather see his country leave the common currency than to submit to the endless series of austerity requirements a bailout would bring. That, indeed, was the primary focus of the debate in the café on Monday evening.

One thing, though, everyone could agree on: Germany is to blame for the suffering of Southern European euro-zone member states. Everyone knows the name of Germany's chancellor, Angela Merkel, as well as that of her finance minister, Wolfgang Schäuble.

Many of those relaxing in the café had spent the afternoon protesting in front of the Cypriot parliament, the first such demonstration there in quite some time and a clear indication of the growing anger in the country. Since Saturday, Cypriots have had trouble withdrawing money, with many cash machines empty. Bank transactions have been blocked as well and while Monday was a regularly scheduled bank holiday, it was announced on Monday that financial institutions would remain closed until Thursday out of fear of a bank run.

Only some 300 people had gathered in front of parliament on Monday, but they held up signs and screamed angry slogans. Many of them were directed at new Cypriot President Nikos Anastasiades, but European leaders -- particularly those in Berlin --and the Troika were also targeted.

"Of course something has to happen," said Cassandra Konpari, a lawyer. "But they can't just penalize us because the banks aren't doing well." It was the first time that Konpari had joined a demonstration in front of parliament and she hoped that it would have an effect. The 30-year-old would rather see Cyprus follow the Greek model, involving public-sector salary freezes, the privatization of state-owned firms and a variety of other austerity measures. A friend of Konpari's, Marina Lavithia -- also a 30-year-old lawyer -- also made her way to the protest. She says she understands that the European Union wanted to target money laundering and tax dodging in Cyprus. "But they wanted to hit the Russians and they hit us instead," she says.

It would be difficult to find a majority of Cypriots who back the Greek model as Kopari does. Indeed, about the only thing uniting most at the Monday demonstration and in the population at large is their rejection of the forced levy on savings accounts. Some would like to see immediate new elections, others want a rejection of capitalism. Mostly, though, they want the bailout conditions to be altered. Immediately.

The diminutive size of the protest might lead one to doubt its effectiveness. After all, it wasn't even big enough to cause traffic interruptions and just a handful of police were on hand -- a far cry from the rioting periodically seen in downtown Athens. The slogans on the signs -- "Fuck Europe," "Hands Off Cyprus," and "Fuck the Bankers" -- were much more aggressive than the mood among those at the gathering. Monday, after all, was a holiday, with many in Nicosia taking the opportunity to take a long-weekend outside the city or to spend the day with family.

Still, the protest -- and the national mood it symbolized -- had its effect. As did growing concerns in Europe and on the financial markets on Monday that a savings account levy could do irreparable damage to trust in Europe's banks. On Monday evening, euro-zone finance ministers granted Cypriot parliament an extra day to determine exactly what accounts might be affected by the levies. In total, Cypriot account holders are expected to come up with €5.8 billion for bailing out the country's ailing banking system. The euro-zone bailout fund European Stability Mechanism is to contribute €10 billion.

But on Monday evening, President Anastasiades informed Merkel and European Monetary Affairs Commissioner Olli Rehn that opposition in the country's parliament was building and that a majority for the bailout deal was in doubt.

That, certainly, would be welcome news to those who spent Monday afternoon in front of the parliament building.