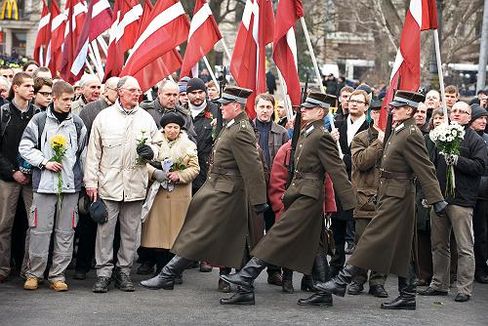 An honor guard leads the way as veterans of the Waffen SS marched through Riga on Monday.

Some 300 Latvian veterans of the Waffen SS and their supporters marched through Riga on Monday to commemorate their comrades who fought the Soviet Union in Adolf Hitler's fanatical combat unit during World War II.

Supporters regard the Latvians who fought in the Waffen SS as liberators from the Soviet occupation in the war. Russia and many ethnic Russians in Latvia regard the annual commemorative marches as a glorification of fascism.

The demonstration went ahead in defiance of a ban by the city. Dozens of protestors jeered at the veterans as they carried flowers to the base of the Freedom Monument in the Latvian capital.

The march takes place each year but the city authority wanted to prevent it this year for fear that it could heighten tensions following heavy rioting in January, when anti-government protestors angered by the financial crisis clashed with police. On Monday, some 1,200 people gathered at the Freedom Monument, which symbolizes Latvia's fight against Soviet domination.

Police separated veterans from counter-demonstrators, who were mainly from Latvia's large ethnic Russian minority, as they shouted "Stalin kaputt" and "Hitler kaputt" at each other. A total of 13 people were detained but there was no violence reported.

The March 16 event has caused tensions every year since the veterans began to mark it soon after Latvia regained its independence from the Soviet Union in 1991. Ethnic Russians, who comprise approximately one-third of the country's 2.3 million people, believe that the Soviet Union liberated the Baltic state from fascism.

Soviet forces occupied the Baltic states of Latvia, Lithuania and Estonia in June 1940, but were driven out by the Germans a year later. The Red Army retook the Baltic countries in 1944, and reincorporated them into the Soviet Union. The states regained independence after the collapse of the Soviet Union in 1991.

On March 16, 1944, Latvian Waffen SS fighters fought the Red Army at the Velikaya river. In 1998 the Latvian parliament declared the day an official day of commemoration, but the holiday was scrapped two years later. Veterans still treat March 16 as an informal holiday, however.

Nearly 80,000 Jews, or 90 percent of Latvia's prewar Jewish population, were murdered in 1941-42, two years before the formation of the Latvian Waffen SS unit. Some Latvians claim this shows the unit could not have played a role in the Holocaust.

But historians say some Latvian Waffen SS soldiers were involved in the murder of Jews as auxiliary police before they entered the front-line unit.

Latvia says many of the 100,000 men who fought in the ranks of the Latvian Legion were conscripted and saw it as the only way to fight the Red Army after Moscow's annexation of their nation before the war. Latvia says the men had nothing to do with SS atrocities. The International War Crimes Tribunal in Nuremberg did not charge the Latvian Legion with crimes associated with the Holocaust.