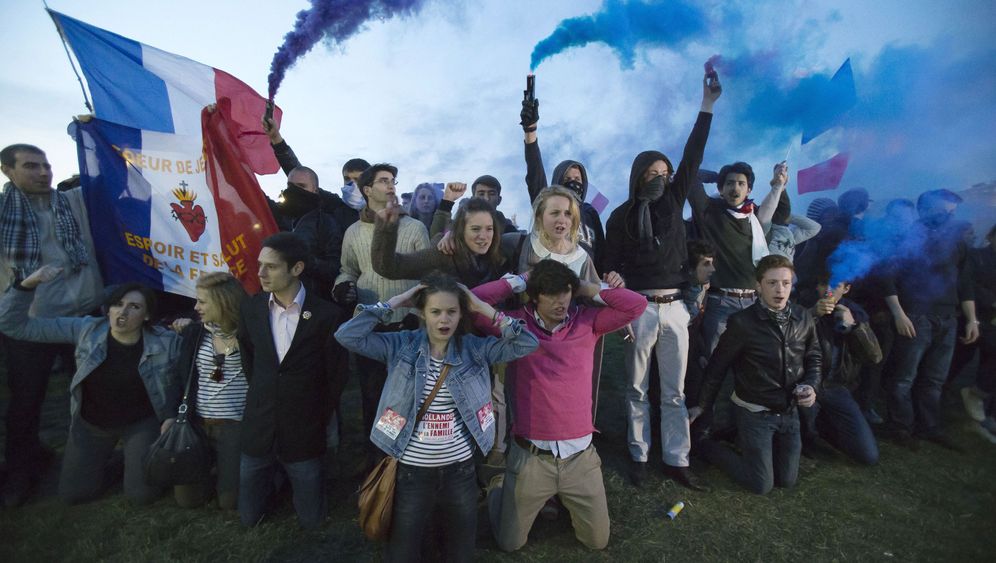 Photo Gallery: A Wave of Homophobia in France

"Sorry to show you this. It's the face of homophobia," Wilfred de Bruijn wrote beneath a photo he posted on his Facebook profile earlier this month. The Dutchman had gone out with a friend in Paris' 19th Arrondissement the evening before and had been walking arm-in-arm with him when they were attacked by three or four people. "Hey look, they're gays," one of the attackers allegedly said. Then they badly beat de Bruijn.

The photo, which his friend took as evidence to give to the police, shows de Bruijn's badly bruised face. De Bruijn filed a complaint with police over bodily injury with homophobic motives. In the days since, the photo has gone viral on the Internet as evidence of a dangerous escalation in aggressiveness toward gays and lesbians in France.

Gays and lesbians have reported being cursed at, insulted and spat upon. It's a situation that has made young gays especially feel ill at ease. On Sunday, a large crowd of young gays and lesbians gathered at the Place de la Bastille to protest against homophobia. "We're currently receiving an increasing number of calls from young people who are totally beside themselves," says Nicolas Noguier of the gay and lesbian aid organization Refuge.

'An Explosion of Hatred and Violence'

Fear has become widespread among gays and lesbians in France following an attack in mid-April on Vice Versa, a popular gay bar in Lille. Four people showed up at the bar, located in the city's historic center, at 10 p.m. They destroyed furniture, broke the front window and slightly injured the bar's owner and a handful of employees.

The Paris activist group Act Up described the developments as "an explosion of hatred and violence," and the organization SOS Homophobie complained about a week of violence. "There's a climate of homophobia that is leading to aggressive actions," said Elisabeth Ronzier, the group's president. She said the debate over same-sex marriage simmering for months in the country was the cause of the "tensions" and "radicalization."

Ever since parliament began debating its "Marriage for All" legislation that would place same-sex marriage on the same footing as heterosexual marriage, a front has been forming against gays and lesbians across the country. France legalized same-sex relations in 1982 and then introduced gay and lesbian civil unions in 1999, bestowing a number of the rights of marriage. But the recent protests, which have attracted hundreds of thousands of demonstrators, have brought prejudices back to the surface that many had thought were long forgotten.

The legal reform, which is expected to pass its final hurdle in parliament on Tuesday afternoon, has divided society and sparked intense political debate. The right-leaning opposition and conservative values factions have been using the issue to drive public sentiment against President François Hollande, who has been unpopular since his election last spring.

And in the margins of the protests, people with animosity towards gays and lesbians have been celebrating their own coming outs of sorts. The latest example came on Monday, when Claude Bartolone, the chairman of the National Assembly, received a threatening letter filled with gunpowder. "Our methods are more radical and swift than the protests," the letter reportedly stated. "You wanted war, you've got it." The letter was signed by a group calling itself the "Interaction des forces de l'ordre."

The national campaign against same-sex marriage and the mass protests even caught President Hollande, who listed the new law as "Proposal No. 31" in his election platforms, completely by surprise -- especially given that 58 percent of French support adoption of "Marriage for All." The only area where a majority reject equalizing same-sex and heterosexual marriage is on the issue of adoption, where 53 percent reject it. Hollande has warned in the face of the attacks that any anti-gay violence and "any form of homophobia" will be punished.

The vast majority of anti-gay marriage protesters have remained peaceful. But even as they have claimed to only rebuke the marriage reforms, the ideological leaders of the "Demonstrations for All" movement have certainly done their share to foment hatred of gays and lesbians in recent weeks.

"They're opening a Pandora's box," says Alain Escada, the head of the fundamentalist Christian group Civitas. "The next thing they will want three-way or four-way marriages," blasted the archbishop of Lyon, Philippe Barbarin. "And then the ban on incest will be dropped."

"Who would then, in the name of the sacrosanctness of love, still be able to convey that sex with animals or polyandry are wrongful," asked the umbrella organization of Muslims in France. Finally, Frigide Barjot, the acid-tongued self-appointed icon of the anti-gay marriage movement, declared, "If Hollande wants blood, then he will get it." The activist later retracted her statement.

So is the homophobia currently being expressed in France proof of a shift in public opinion in the longer term or just an ugly temporary phenomenon? For Louis-Georges Tin, such animosity towards gays and lesbians hasn't come as a surprise. "In this respect, the debate over 'Marriage for All' has simply been a reinforced indicator," the author of the "Dictionary of Homophobia" told the French daily Libération.

Tin argues that the conservative opposition is trying to use its at times strong rejection of the reform to burnish its own damaged images. On the one side, he argues the conservative Catholic Church has been marred by pedophilia scandals. And the political opposition parties have been weakened by in-fighting. Their vehement rejection of "Marriage for All," he argues, gives them the opportunity to revamp their images as moralists.

"Homophobia has been given new clothes -- it's more presentable and complex, but it remains just as pointless," Tin told the paper in an interview. "These outbursts will soon be a thing of the past."