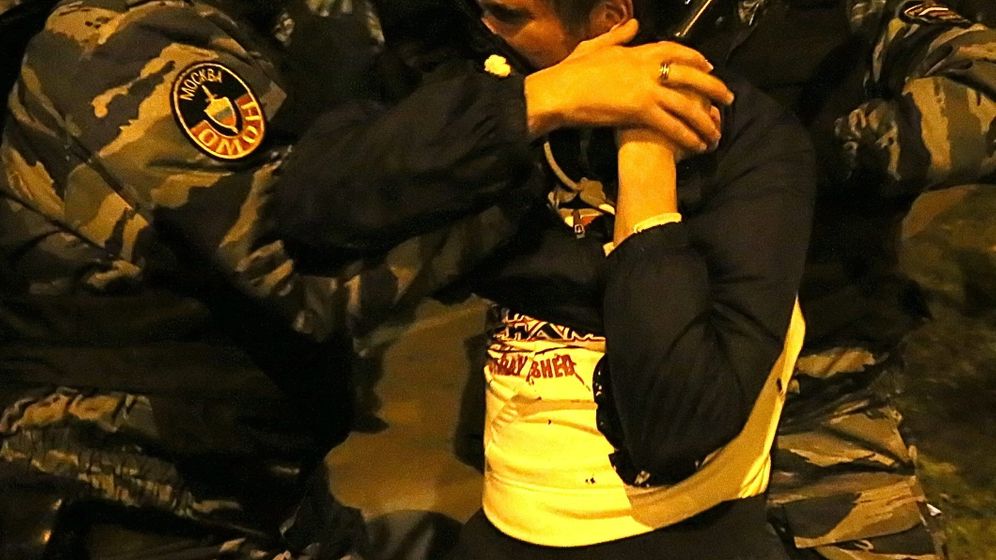 Moscow's cosmopolitan flair begins to fray around the city's outskirts. The further from the center one travels, the taller the low-income apartment blocks become.

Far to the south lies the district of Biryulyovo, home to some 90,000 residents. Just one of the Russian capital's dozens of suburbs, it was relatively obscure until Sunday -- when xenophobic rioting made international headlines.

An angry mob reportedly went after immigrants and their businesses there, breaking windows, setting fires and turning over cars and delivery trucks, chanting slogans such as "Russia for Russians." Amid the violence, television broadcasters warned against attacks on police, saying that they "protect order in our city."

The riots were sparked by the death of a young Biryulyovo resident, 25-year-old Yegor Sherbakov, who was allegedly stabbed by a "non-Russian" on his way home on Thursday night, according to his girlfriend. After the man allegedly harassed the couple around 2 a.m. there was a scuffle, and media reports say that the blade injured Sherbakov's heart. He died at the scene.

On Sunday afternoon, several thousand demonstrators gathered to demand action from city officials -- namely the arrest of the murderer and the deportation of the area's guest workers from central Asia and the Caucasus. A number of right-wing extremists from throughout the Moscow area were reportedly on hand after neo-Nazis put out the call on Internet forums the day before, and several hundred clashed with police for hours. Though officers from the feared OMON special unit were also present, the police failed to gain the upper hand.

After initial arrests were made, the crowd surrounded police vehicles and forced the release of a number of suspects. Demonstrators were also able to evade police barricades through back streets. Protesters wanted to "whet their blades," a reporter from daily Kommersant overheard right-wing extremists saying. In response to the violence, Moscow police deployed all available personnel, implementing the "Vulkan" plan for operations, conceived for use in the event of a terrorist attack and not used since the Moscow subway bombings that killed 40 people in 2010.

Security forces blocked off Manege Square in front of the Kremlin, and the Ministry of Internal Affairs reported some 400 arrests. Five police and 11 demonstrators were injured.

Authorities seem to be nervous, and fear that the unrest could spread beyond Biryulyovo. What's more, thousands of Muslims plan to celebrate the important holiday of Eid al-Adha, which begins on Monday night and causes cultural tensions year after year.

Fear of domination by foreigners has overtaken the fear of terrorist attacks in recent Russian opinion polls, and ethnic tensions in the country's big cities are the "biggest danger for Russia's national security," says Dmitri Trenin, director of the Carnegie Moscow Center.

Russia is the main destination for migrant workers from Central Asia, and some 4 million Tajiks, Uzbeks and Kyrgyz work there legally. But at least the same number of immigrants are thought to be living there illegally. Russian authorities are playing both sides of the issue. This summer the Federal Migration Service, which was recently raised to the status of a ministry, rounded up hundreds of illegal foreign workers and housed them in internment camps outside Moscow before deportation. Russian media criticized these as "concentration camps."

And while the newly elected Moscow mayor Sergey Sobyanin called for tougher immigration laws during his campaign, the city's municipal administration is one of the biggest employers of low-paid foreign workers, many of whom live in crowded cellars. Foreigners are also the main group of workers building the arenas for the Sochi Winter Olympics in 2014, President Vladimir Putin's prestige project.

Both Kremlin supporters and critics are now attempting to use the riots to their advantage. Opposition leader Alexei Navalny, for instance, has called for the introduction of visa requirements for Central Asian immigrants.

Meanwhile, the Russian Orthodox Church has published commentaries that border on calls for vigilante justice. The "blood of the murdered cries out to heaven," wrote Archpriest Vsevolod Chaplin, who heads the church's department concerned with church and society relations.

Commenters visiting nationalistic online forums were sounding triumphant after the riots. Similar action ought to be taken in "ALL quarters of ALL cities in RUSSIA," wrote one user.

On Monday morning Moscow police conducted another large operation in Biryulyovo, but not against the rioters. In a "pre-emptive raid," some 300 officers arrested more than 1,200 people from a vegetable warehouse that employs many migrants, and where the suspected killer is also believed to work, according to Russian media.