When António Costa meets people, he makes eye contact and smiles broadly. The Portuguese prime minister is full of curiosity when approaching counterparts like German Chancellor Angela Merkel, he amiably shakes hands with journalists before live television interviews and he is all ears when talking to voters on the street. He always seems to be in the best of moods, peering out from behind his rimless glasses with his dark eyes, a slightly ironic expression on his face.

The cordial Senhor Costa, head of a Socialist Party minority government that is tolerated by the Communists and the Trotskyist Left Bloc, has survived for four years, an achievement that nobody thought he was capable of. When he entered office, the opposition ridiculed his political alliance and referred to it as a "contraption."

Yet even as neighboring Spain has spent more time holding elections than implementing policy, Costa enjoyed a successful term in office. And he is now hoping to be re-elected on Oct. 6. According to public opinion polls, his chances are excellent, with his party currently polling at up to 38 percent, much higher than four years ago. "He will win the election," predicts Miguel Sousa Tavares, one of the country's best-known political commentators. The only real question, Tavares says, is whether voters will hand him an absolute majority.

When Costa came to power in 2015, the mood in Portugal was tense, primarily because of the terms imposed on the country by the so-called troika -- the European Central Bank, the European Commission and the International Monetary Fund -- in exchange for a bailout package worth 78 billion euros. But since then, Costa has shown himself to be one of the few socialists in Europe able to cushion the blow of austerity while creating economic growth and fulfilling the requirements of the European Stability Pact.

António Costa joined the youth wing of the Socialist Party in 1975 at age 14, just one year after the Carnation Revolution that threw off the decades-old dictatorship. Costa's father, a writer from the former Portuguese colony of Goa in India, had fought against the dictatorship as a communist. He was harassed by the secret service and thrown in prison several times; his books were banned. Costa's mother was one of the first women to head up the country's union of journalists.

"Different than Most Politicians"

After studying law, Costa worked at the Lisbon legal practice of the socialist Jorge Sampaio, whose presidential campaign he would go on to organize 20 years later. From 1997 onwards, he occupied several different cabinet positions, most recently as interior minister in the government of José Sócrates. A popular politician even then, he ran for the governorship of Lisbon in 2007. Though he only managed 30 percent of the votes, he hammered together a leftist coalition and went on to win two additional terms in Lisbon city hall by 2015.

The political commentator José Pacheco Pereira is anything but a political supporter of Costa's. He belongs to the economically liberal Social Democratic Party (PSD) and served as vice president of the European Parliament until 2004. Still, he says that Costa is "different than most politicians, who from morning until night only think of wielding their own personal power." Costa, says Pereira, is honest and "hides nothing."

As part of his campaign, Costa toured through the country as summer came to an end, traveling along National Road 2, which runs through Portugal from north to south. He started in Chaves, a town in the arid Tras-os-Montes (Behind the Mountain) region, on the border with Spain. Traveling in stages, he and his entourage ultimately ended up in Faro, 700 kilometers away on the beaches of the Algarve.

The trip gave voters the possibility to communicate their concerns directly to their political leader: overcrowded schools; the difficulties associated with an overwhelmed justice system; and the long waiting times for appointments with medical specialists. Costa's PSD opponent, Rui Rio, for his part, preferred to make indoor appearances in front of hand-picked audiences. Four years ago, the PSD managed to haul in the most votes, but the party was unable to put together a ruling coalition and has lost considerable popularity since then.

Among Costa's greatest accomplishments was establishing the arrangement whereby he would be tolerated by leftist parties, who had been at political war with the Socialists since the end of the dictatorship in 1974 -- parties like the still-orthodox Communist Party, the Greens and the Trotskyist Left Bloc. Costa signed different agreements with each of the three groups, relying on his negotiating skills. Writer and commentator Pereira is convinced that Costa had already prepared a deal with Jerónimo de Sousa, the charismatic head of the Communist Party.

Both sides now have a positive assessment of their non-coalition. "We did everything that we promised," says the Socialist. "It was worthwhile," says the Communist, who suppressed his antipathy of the eurozone Stability Pact and of NATO essentially for the good of the nation. Costa has praised him as a result, calling him trustworthy and a man of his word.

More than anything, though, the prime minister has been able to restore the population's trust in government. Costa says he has been able to create 350,000 jobs during his term. When he entered office, unemployment was at 12.4 percent, but is only half that level today -- the lowest since 2000. Furthermore, the economy has been growing at an annual rate of around 2 percent since 2016, which is higher than the EU average, in part thanks to a boom in tourism. Lisbon has become one of the most popular cities in Europe, a trend for which Costa himself paved the way when he was mayor of the Portuguese capital: He transformed Lisbon into a startup hub and brought the international Web Summit to the city, which attracts tens of thousands of digital experts each year.

The economic recovery has come in part due to a positive business cycle, but Costa also brought in the Harvard-educated economist Mário Centeno as finance minister, who once worked for the Bank of Portugal, the country's central bank. He held true to the stabilizing course charted by his conservative predecessor, though he did make a few concessions to the leftists: The government increased the minimum wage, pensions and civil servant salaries to signify that the widely hated period of austerity was over. The result was that families had more money in their pockets. At the same time, Centeno was able to reduce state spending, to the point that new borrowing this year is to be just 0.2 percent of gross domestic product (GDP).

It is a result that was far from obvious four years ago. At the beginning of Centeno's term as finance minister, his then-counterpart from Germany, Wolfgang Schäuble, was skeptical. But by 2017, Schäuble had been convinced, even praising Centeno as the "Ronaldo of the Euro Group." Portugal is still staggering under a sovereign debt load equal to 121 percent of GDP, but the ratings agencies have once again given the country such a positive assessment that it has been able to save 2 billion euros in interest payments relative to 2014.

Still, Costa's establishment of the leftist alliance four years ago was a risky move. But despite the fears of many, the Socialists did not abandon the political center to the PSD, instead demonstrating an ability to attract centrist voters -- in part thanks to Finance Minister Centeno, who has also been head of the Euro Group since 2018. One of Costa's campaign promises this time around is that he will once again find a spot for Centeno in his cabinet and he has assured voters that if there is another international crisis, Portugal is well prepared. He has promised to invest 10 billion euros in the rail network, road construction, schools and hospitals, but insists that such spending will not drive up the deficit.

The Left Bloc, however, is now challenging Costa on his spending plan, with the party's head saying that the prime minister's lack of spending during his first term has weakened infrastructure from schools to the healthcare system. Portugal's far left would also like to revoke labor market reforms, which allowed more flexible employment contracts. Since the beginning of the year, teachers, nurses and doctors have been striking for higher salaries and better working conditions.

When fuel-tanker drivers went out on strike over the summer, the prime minister used the police and the military to supply the country's gas stations. The opposition attacked the prime minister, accusing him of being an illegitimate strikebreaker. But millions of vacationers were grateful.

Yet even though many voters in Portugal value the prime minister as a pragmatist, numerous political analysts do not believe that he will enjoy a landslide victory at the polls. With election victory apparently in the bag, they say, it may prove difficult to mobilize voters to cast their ballots. Particularly given that people are no longer as concerned about their employment status, according to recent studies.

Costa, for his part, has made it exceedingly clear that he would like to avoid a coalition if possible, and has warned that a fragmentation of the left could result in the kind of political stasis that has been seen in Spain in the last several years. "It is better," he said recently in reference to the Left Bloc, "not to destroy a good friendship with a bad marriage." 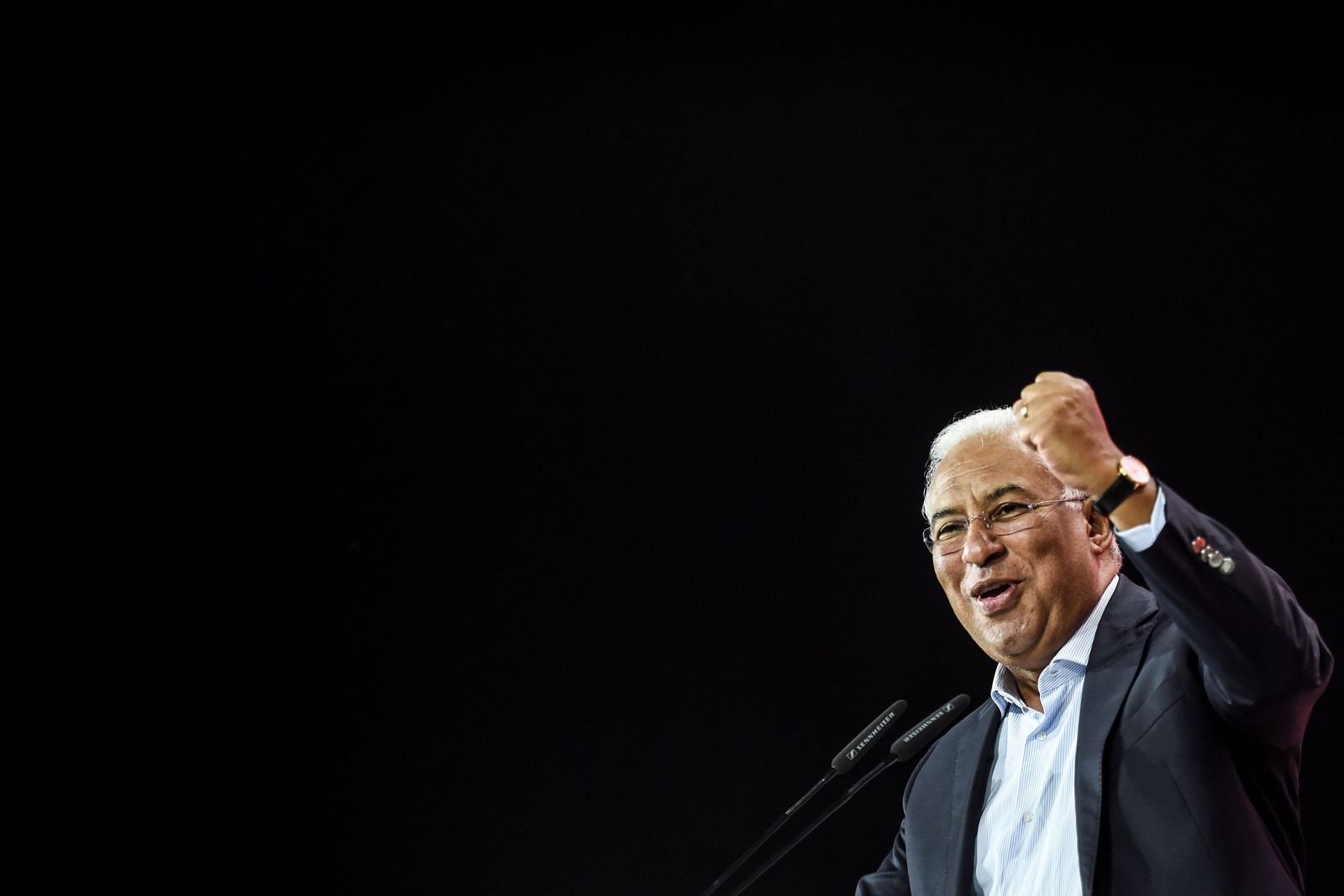