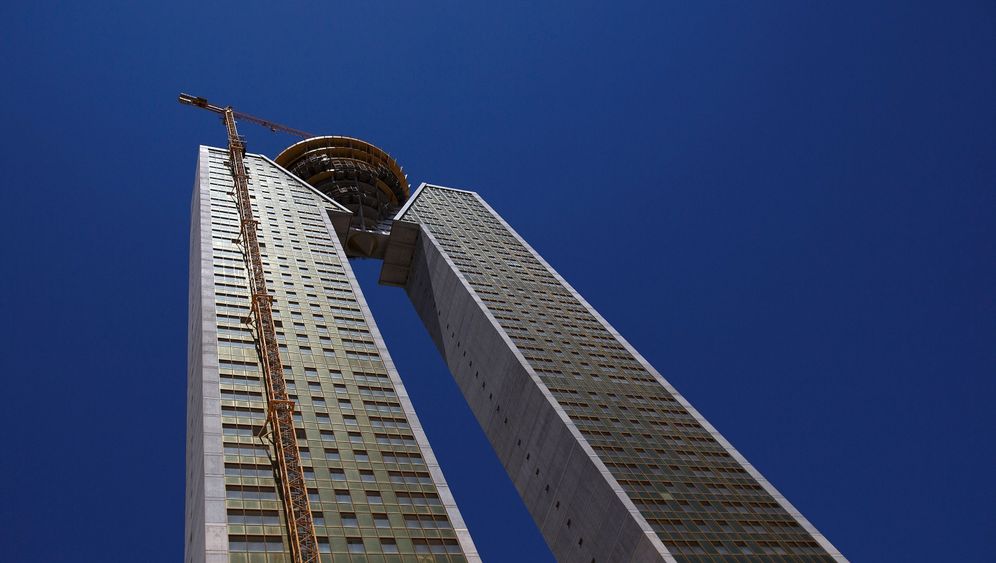 It should have been the pride of Benidorm, a town on the southeastern coast of Spain. And with its 47 stories soaring 188 meters (677 feet) in the air, it was also set to be the tallest residential building in the European Union. When the plans for the building, called Residencial In Tempo, were first proposed in January 2006 during the construction boom, there was no talk in Spain of a financial crisis. But shortly after construction on the building began, the crisis hit the country hard. The project progressed only in fits and starts, and then apparently went a little haywire -- because the architect forgot, among other things, to fit the skyscraper with an adequate elevator shaft.

The now notorious mishap was caused by a mixture of greed and incompetence. The In Tempo building was originally planned to have only 20 stories. Wanting more tenants and buyers, the client asked that the building be enlarged. So the architect simply added 27 stories -- without adapting the elevator shaft and lifting machinery accordingly. Unbelievably, the oversight supposedly wasn't spotted until January 2012 when the building was already 110 meters tall.

The lifting mechanism that was originally installed for the building had been designed to serve exactly 20 floors. When the decision was made to add the extra stories, the architect simply extended the existing shaft but failed to consider the fact that more stories would also mean more use or that the space would not be sufficient for the necessary amount of additional lifting equipment. The Spanish press has depicted the construction disaster as a national disgrace, a beacon of incompetence -- something akin to German embarrassment over Berlin's ill-fated international airport project.

A Long Series of Mishaps

Even before the elevator snafu came to light, the construction project hadn't exactly blazed a trail of glory. Monetary shortages plagued the project, and worker strikes over months of unpaid wages continuously delayed construction.

Work on the towers began slowly, using methods reminiscent of ancient Egypt. A freight elevator wasn't installed until the first 23 floors were already constructed. Before that, it had been all crane and legwork. And when the freight elevator was finally installed, it collapsed, injuring 13 workers.

As newspaper El País has now made public, the construction of In Tempo resulted in an unending series of mishaps and defects. But it's difficult to figure out whom to blame. The building was originally financed by the bank Caixa Galicia, which ran into financial difficulties in 2009, merged with Caixanova in 2010, and ultimately had to be nationalized in 2011 as NCG Banco. Today the bank has nothing more to do with the project.

It's still unclear how fast, if at all, the building's biggest shortcoming -- its lack of an adequate elevator shaft -- can be solved. The obvious option would be an external elevator, which would however constitute a significant infringement on the architectural concept of the luxury building.

Meanwhile the responsible architect has dropped out of the project, and construction has been taken over by the Sociedad de Gestión de Activos de la Reestructuración Bancaria, better known by the acronym SAREB. As Spain's "bad bank," it acquires property development loans from Spanish financial institutions in return for government bonds.

The official line is still that the building, which was originally set to be finished in 2009, will be completed by December of this year. The sale of apartments is said to be ongoing, albeit with significant price reductions, according to Britain's mass-circulation Daily Mail. But if the elevator issue isn't sorted out soon, selling those units is likely to be an uphill battle.