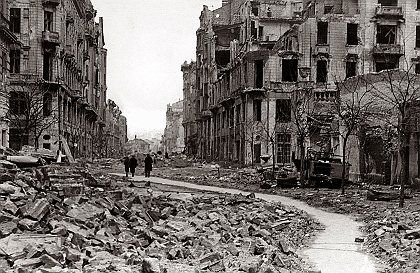 Warsaw was destroyed during World War II, and over 6 million Poles were killed. The Poles are playing the history card in their current dispute with the EU, but with reason.

In the dispute over the voting rights in the European treaty, the Polish Prime Minister Jarolsaw Kaczynski has now come up with an argument that any German would find it difficult to contradict. "If Poland had not had to live through the (World War II) years of 1939-1945, Poland would today be looking at the demographics of a country of 66 million." The Polish leader was attempting to justify his demands for an alternative voting rights system, rather than the one proposed by the German rotating EU presidency.

There is no question that not only the history of Poland, but that of every European country, would have been much happier without the German invasion of Poland and its monstrous consequences. It should be remembered that during World War II there were an estimated 6 million Polish victims of the German occupation -- of which 5.7 million were civilians. In Poland alone, 2.4 million Jews were murdered.

Kaczynski made the statement on Polish radio on Tuesday but otherwise it didnt really resonate at home. However in Brussels and Berlin the comments were registered with concern and were seen as an indication the Polish government is now doing what it often does when it runs into trouble: plays the history card.

And this Thursday evening, when the Polish square-root idea is broached, one can expect this kind of reminiscing again. Warsaw is isolated and is threatening to use its veto. But anyone who thinks that a hopeless cause would make the Polish prime minister or president break out in a sweat doesnt know the Polish mentality. When there's nothing more to be done, that's when things really get going for people like the Kaczynskis.

Caught in the Amber of History

The Catholic twins are caught up in the amber of history. But what we might consider isolationism, and even parochialism, the Kaczynskis and most Poles see as a political defensive fortification. While amber conserves, it also protects from outside blows.

Luxembourg's Prime Minister Jean-Claude Juncker has called on the Kaczynskis to make a "leap into the present." "You will not be happy in the long-run if you are always looking in the rearview mirror." Juncker is right. But it is worth looking in the Kaczynskis' rearview mirror. Because what the Polish president and his brother, the prime minister, see there is not the same thing that Tony Blair or Jean-Claude Juncker, Angela Merkel or Jose Manuel Barroso see. For the Kaczynskis objects in the mirror appear closer than they really are.

In their rearview mirror, for example, it is the end of August 1939, a few days before the German invasion of Poland and a man by the name of Jozef Beck appears in view. He is Poland's foreign minister and he is receiving the US diplomat Joseph K. Davies in his office in Warsaw. The two are discussing the danger of war breaking out. Davies, previously US ambassador to Moscow, is pretty pessimistic, but Beck sees things differently. The Germans should come! If the Wehrmacht attacks, Polish troops will be in Berlin within three weeks. Davies thought Beck was completely crazy. And he turned out to be right. The Wehrmacht marched into Warsaw four weeks later, and the biggest ever program of destruction in the history of mankind got underway.

Davies urged Beck to form an alliance with Moscow. That was out of the question for the Poles, just as, in all their quarrels with Brussels, it would be out of the question for the Kaczynskis today. The pattern of thought is certainly similar: Before, it was the Germans and the Russians who occupied us, now the EU wants to pull a fast one on us. But how did the Kaczynskis come to this conclusion? A look in their rearview mirror provides some answers.

No New Beginning, Rather Soviet Occupation

The Kaczynskis' father was badly injured fighting in the Warsaw uprising, while their mother joined the anti-German resistance at the age of 14 and worked as a medic. Several of their uncles died in Nazi concentration camps, on the way to Russian deportation, or in the Soviet mass shootings.

For the Kaczynskis and their countrymen there was no new beginning in 1945. Instead, they were occupied by the Soviets. On Stalin's orders the Polish borders were shifted and millions of people were resettled. The suffering of these millions of Poles also belongs to the history of the expulsion of Germans from Polish lands, though it is often forgotten.

A country that was on the brink of civil war fell under the Soviet yoke, but the Polish desire for freedom was never broken. And the fierce courage that was fired up during the Warsaw uprising against the Nazi occupation in 1944, came back to life in 1980 with the founding of the independent Solidarity trade union. In the end, despite martial law and all that went with it, the Berlin Wall fell and the Soviet Union broke apart. Without the courage of the Poles, there would never have been a new Europe, the constitution of which is being fought over so fiercely today.

These facts could have been emphasized, for instance, in an historical preamble to the European constitution -- something that could have possibly avoided the current conflict. The Poles are not just concerned with the specific voting rights, and that they will lose influence in the future (which is difficult to deny), but -- perhaps above all -- about the recognition of their services to history.

The bravery paired with obstinacy of people like Beck and the Kaczynskis spawned both: The Warsaw Uprising, Solidarity -- and the blockade in Brussels. For the Poles these all go back to the same unbending attitude. In German sitting rooms people like to hang pictures of a stag in the morning dew -- but over Polish sofas there is an image of the Polish cavalry in 1939, attacking German tanks with raised sabers. Kitschy? Sure. But it causes any German who sees it to go red with shame and be moved to tears.

Poles Are the True Europeans

The martyr-like pose of the Poles has started to get on the nerves of many Europeans -- most of all, because they always adopt it whenever the going gets tough on the international stage. That was the case during the negotiations for Poland's EU membership, it's the case now during the treaty debate, and it will be the case in the future too. Whoever is concerned about this or whoever -- like Jean-Claude Juncker -- cheerfully tells the Warsaw brothers to stop moaning, should definitely bear in mind that the Poles live a more European life, and in particular work in a more globalized way, than most Europeans.

While the euros are counted in Luxembourg, tens of thousands of Poles travel by bus every day from Warsaw, Krakow, and Wroclaw to other European countries to find work. Practically every pub in Ireland has Polish staff. No nation is as cosmopolitan as Germany's eastern neighbor. While the Germans regard foreign countries from the comfort of a hotel bar or beach, the Poles are busy cleaning rooms or plucking strawberries. Is this historically just, bearing in mind recent German-Polish history?

No. In actual fact, it should all be the other way round. For this reason, the Poles are allowed to be annoying. They have their reasons. And they secretly know that they now have a glowing future in Europe anyway.